What Film- And Prop-Makers Need To Know About 3D Printing

From day one, the movie industry has tried to create motion pictures in which everything looks as realistic as possible. Filmmakers and directors have been using a combination of diverse camera tricks, special effects, but also props to make the audience believe what they see is real.

In recent years, 3D printing and scanning technology, also known as additive manufacturing, has brought a revolution to how things are done behind the scenes in the film industry. 3D scanning and printing has been included in the production of a variety of films including Skyfall, Star Wars: The Force Awakens, Guardians of the Galaxy, and Thor: The Dark World. Props in these movies have been used in many different ways and there are several reasons why producers are, increasingly, having props 3D printed. 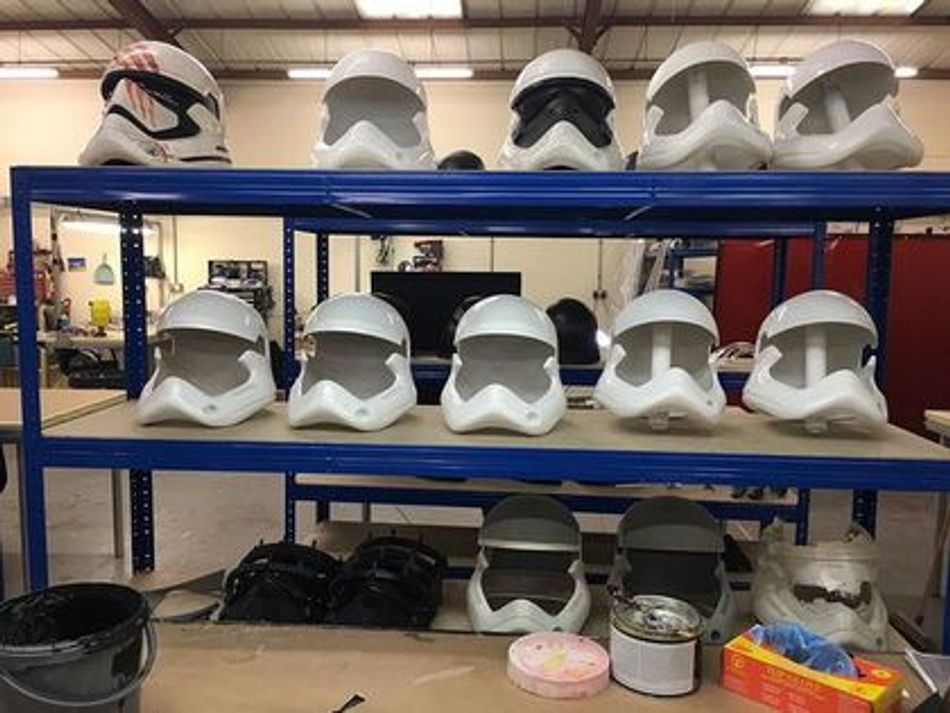 Some advantages of using 3D printing in the prop and movie industry include the high quality and resolution, scalability, speedy turn around times as well as enhanced customization or design changes that can be achieved without a lot of effort. Glenn Hetrick, a professional in the industry and CEO of Alchemy Studios, voices that 3D printing has helped him to create props that look far more realistic than using traditional methods. Hetrick says that “a lot of tricks we relied on for decades to bring creatures to life no longer work because you can see the edges, you can see that it was made out of foam and not skin […], 3D design and printing is making the process so much more fluid” (2015).

A colleague of Hetrick adds that “details that would take you forever to do, I can do now literally in minutes in the computer with greater precision and resolution than I can do by hand. As technology has evolved, the pen and paper has become the stylus and screen. And the clay is digital clay and so you are sculpting in the computer” (Neville Page, 2015).

“Quick turnaround times are essential in this industry and with the ability to create digital libraries, storage of props and models are no longer an issue. If philan original prop is damaged or goes missing you can replace it with a 3D printed version on set in a matter of days”  Phil O’Connell, 3D printing services manager – voxeljet UK Ltd.

A recent example is the production of an iconic prop used for a british comedy franchinse, Red Dwarf. Phil O’Connell says that “the Red Dwarf crew had ‘Starbug’ 3D printed in order to preserve the original ship from taking any damage on set. The original ship was scanned, 3D printed, epoxied and painted within a week which gave the model crew a time advantage of six weeks compared to traditional reproduction. Added to that, production costs were reduced considerably.

The following video does not only show how the Starbug was replicated, it also illustrates the entire scanning, printing, and finishing process when a prop is created:

Additionally, the Red Dwarf production team has had a running success with model shots over the years and still use this method over computer generated imagery (CGI).

O´Connell: “In general, elements like fire, water, wind and ice are challenging to create digitally on the screen. One of our first successes was a Bond scene in which an Aston Martin DB5 was shot until it exploded. Printing and blowing up the miniature saved a lot of money in digital rendering and of course the real DB5 itself. We also printed a 1/3 scale model of a helicopter which crashed into a house and exploded”.

voxeljet has been involved in many projects within the movie sector where props, prototypes and other models were developed and printed. While there are a couple of examples of how 3D printing has helped the movie industry, one cannot fully say how many producers have turned to this technology. James Reeves, the managing director of voxeljet UK, highlights that the film industry “is a very secret industry” and that many projects cannot be shared, due to confidentiality. Nevertheless, Reeves says “we do know that this [industry] is growing and that 3D printing offers time, cost and detail advantages over traditional methods.
With the ever-increasing move to visualize props digitally, it makes sense to use a digital manufacturing process to produce an exact replica”. Reeves mentioned that “there are hundreds of projects over the years”, and that “until this year the film sector was the vast majority of sales for voxeljet UK whilst being located within the Pinewood studios in London”.

3D printing does not only save time when creating a single or multiple props, but also in the overall development of the final design for a prop. In the past, for each change that is made to the design of a model, a new one had to be designed and developed with the agreed changes. Now, with the help of 3D printing, any changes can be made to the digital file of a model.

Within one print job, different versions of a single prop, from concept models to scaled and full-size props can be printed overnight. With this quick turnaround time, communication with clients is responsive and saves time in developing customized final versions of models and props. (Terdiman, 2012).

Although 3D printing has proven to be innovative in how things are done in the movie industry, this technology modernized the general arts & entertainment business in similar ways. For example, creating sculptures has been revolutionized with 3D printing. When recreating a model or sculpture of an object or person with the use of only an image, this is often a challenge for an artist. The project to recreate a 3.66-meter-long Velociraptor skeleton is a perfect example of how effective and useful 3D printing is to create models, especially on a larger scale. The existing skeleton was 3D scanned to obtain a digital file required for printing. After scanning, the bones were printed, epoxied, painted and mounted together. Within only eight days, a high-quality and precise copy of the skeleton, in 1:1 scale, was created. This illustrates the vast speed and accuracy of this technology.

Phil O’Connell has been observing the trend of applying 3D printing technology in the entertainment industry for some time. He argues that “application cases from the world of art, museums and archeology, merchandising to commercials and store design are becoming more common at our 3D service center. The reason is obvious, there is no simpler method for duplicating rare findings and for reconstructing or generating historic templates, statues or skeletons than in 3D printing. 3D scanning is a non-invasive method of digitally replicating objects and our 3D printers are powerful and big enough to face exciting projects at almost any size. We´ve printed many maquettes for set and light planning as well as set detailing – let´s see how long it takes to print an entire film set”. Furthermore, “our 3D prints can also be cast in a number of materials using, for example, a two-part silicon mould with a fiberglass jacket”, which is often times used to recreate part of bodies.

As illustrated above, there are several motivations why the production of props through additive manufacturing can be a time saving and economic opportunity. In terms of speed, scalability and complexity, precision and reproduction, as well as fine detailing, 3D printing offers benefits compared to conventional production methods. It is always fascinating to see how the movie industry develops over time to create mesmerizing imagery. For that reason, one should bear in mind that this would not be possible without the work of skilled and talented model makers, sculptors, and 3D printers.  Although the production of props may remain the same, the tools used to create them will change.

voxeljet is a leading manufacturer of industrial 3D printing systems for producing molds and models without tools. voxeljet has offices in Germany, the United States, the U.K., India and China. voxeljet has a well-coordinated product range, from small research models to large-format industrial mach... learn more

NavVis specializes in developing next-generation technology that enables accurate mapping of indoor spaces. And given that the wearable NavVis VLX system's accuracy had to compete with terrestrial solutions, the scanner’s sensor positioning would be the designers' top priority.

According to a recent industry report from Deloitte, the demand for medical services around the world will reach a staggering $8.7 trillion by 2020.