New research is primed to speed up the development of high-capacity energy storage, necessary for reliability in a grid powered by renewable energy. (Image: rendering, Shutterstock)

A 'universal descriptor' will help determine the best chemicals to use, reducing time in the lab — and costs — necessary for the development of new batteries, new research in Vijay Ramani's lab shows

The pace of progress in the renewable energy sector is limited not only by the technology to capture energy from the sun, the wind, the oceans or the Earth’s radiant heat, but also by the ability to effectively store and deploy that energy after it has been harnessed.

The primary hurdle in the development of reliable batteries that can be scaled to serve the needs of the grid is, unsurprisingly, cost — of materials, but also of research necessary to find the best materials.

At Washington University in St. Louis, a research team in the lab of Vijay Ramani, the Roma B. & Raymond H. Wittcoff Distinguished University Professor at the McKelvey School of Engineering, has developed a way to determine which materials will be suitable as a key component in any organic redox flow battery (ORFB) for grid-scale energy storage: the electrolyte.

The research was published Aug. 20 in the journal Proceedings of the National Academy of Sciences of the USA (PNAS).

Organic redox flow batteries (ORFB) are low-cost. Their design makes them cheaper than lithium-ion batteries per unit of electricity stored at scale, and they use inexpensive organic materials for the battery actives (cathode and anode).

“In our system, we are using viologen, which is widely used as a herbicide and is very inexpensive,” said first author Kritika Sharma, a PhD student in Ramani’s lab. “If we are using such organic actives, then the main decision is, ‘What electrolyte do we dissolve it in to maximize battery efficacy?’” she said.

Traditionally, answering that question has involved a lot of trial-and-error experimentation and analyses. What Ramani’s team found, however, has the potential to eliminate much of this work: A universal descriptor that indicates which electrolytes are best paired with organic actives. 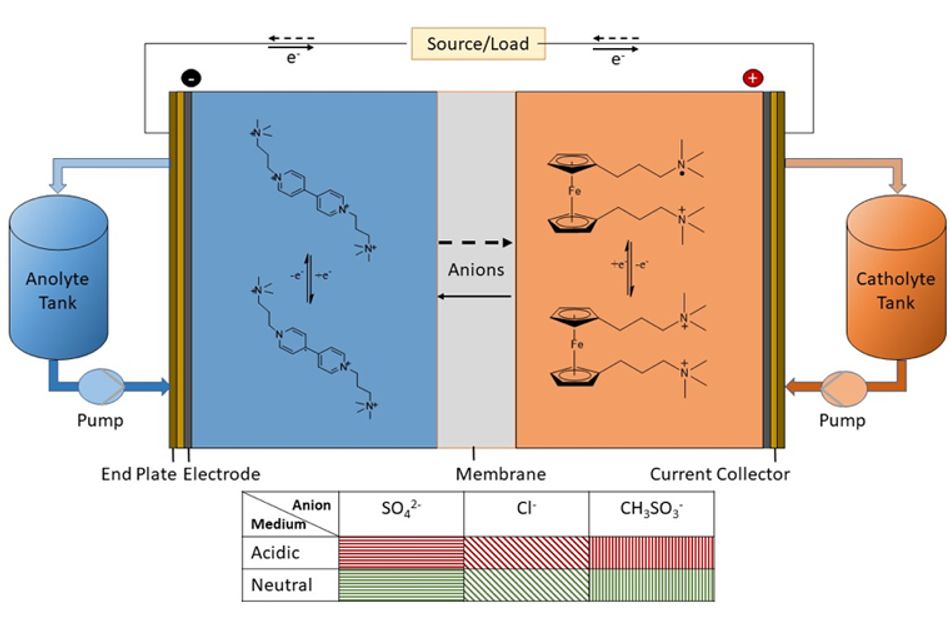 “Our descriptor i.e., solvent reorganizational energy, allowed us to show that low pH electrolytes with methane sulfonate or chloride counterions worked best,” said Sankarasubramanian, joint first author on the paper and assistant professor of chemical engineering at the University of Texas at San Antonio. “We were able to predict this with an hour of experimentation in the lab instead of the usual days or weeks.”

Although the paper shows results from a limited number of combinations, Sharma said the descriptor can be generalized as it is based on the fundamental relationship between the actives and electrolytes and correlates the kinetic and transport properties in the system.

With a generalizable method to predict the best electrolytes for a given organic active, the development of new storage technologies will become more efficient — and none too soon.

“Grid-scale energy storage is required to have a stable grid when intermittent solar- and wind-based generators are dominant,” Sharma said. “Our universal descriptor can help speed up the development of new storage solutions.”

Critical Design Considerations in Estimating the State of Lithium-ion Batteries

Media relations professional and freelance reporter with 12 years of experience writing online, for newspapers, and for a wire service. I cover general science, health, the environment, and anything else that piques my interest. Skills: AP style, research, reporting, science writing, strategic comm...

In the joint project LeMoStore, partners from research and industry are developing a network-integrated solution for a stable power supply with renewable energies under the leadership of KIT

Critical Design Considerations in Estimating the State of Lithium-ion Batteries

Article 4 of our Energy Storage Series: Accurate state of health and state of charge estimations is essential for safe and efficient battery use.