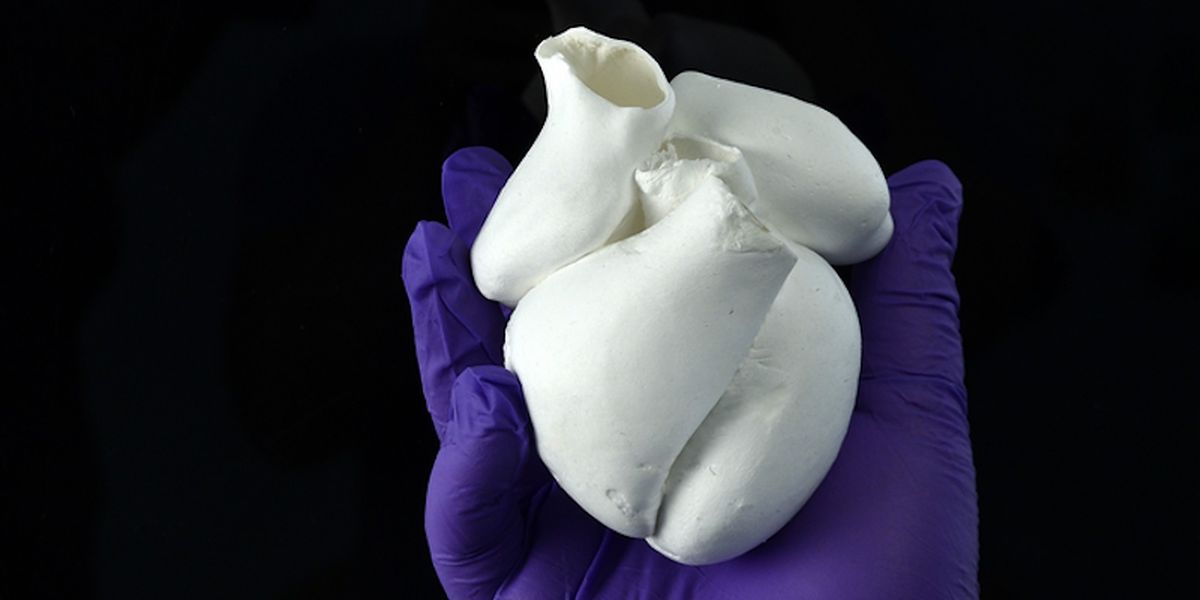 Heart disease — the leading cause of death in the U.S. — is so deadly in part because the heart, unlike other organs, cannot repair itself after injury. That is why tissue engineering, ultimately including the wholesale fabrication of an entire human heart for transplant, is so important for the future of cardiac medicine.

To build a human heart from the ground up, researchers need to replicate the unique structures that make up the heart. This includes recreating helical geometries, which create a twisting motion as the heart beats. It’s been long theorized that this twisting motion is critical for pumping blood at high volumes, but proving that has been difficult, in part because creating hearts with different geometries and alignments has been challenging.

Now, bioengineers from the Harvard John A. Paulson School of Engineering and Applied Sciences (SEAS) have developed the first biohybrid model of human ventricles with helically aligned beating cardiac cells, and have shown that muscle alignment does, in fact, dramatically increases how much blood the ventricle can pump with each contraction.

The research is published in Science.

“This work is a major step forward for organ biofabrication and brings us closer to our ultimate goal of building a human heart for transplant,” said Parker, the Tarr Family Professor of Bioengineering and Applied Physics at SEAS and senior author of the paper. 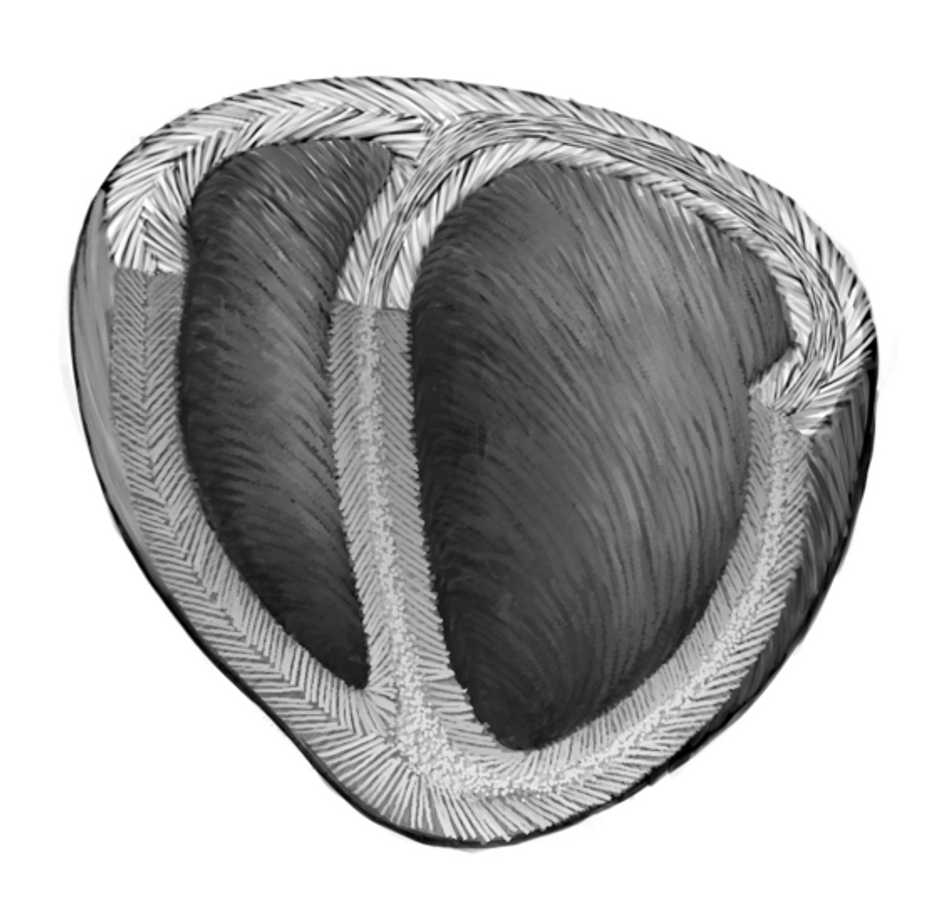 A schematic diagram of the helical alignment of a human heart. (Credit: Michael Rosnach/Harvard SEAS)

This work has its roots in a centuries old mystery. In 1669, English physician Richard Lower — a man who counted John Locke among his colleagues and King Charles II among his patients — first noted the spiral-like arrangement of heart muscles in his seminal work Tractatus de Corde.

Over the next three centuries, physicians and scientists have built a more comprehensive understanding of the heart’s structure but the purpose of those spiraling muscles has remained frustratingly hard to study.

In 1969, Edward Sallin, former chair of the Department of Biomathematics at the University of Alabama Birmingham Medical School, argued that the heart’s helical alignment is critical to achieving large ejection fractions — the percentage of how much blood the ventricle pumps with each contraction.

“Our goal was to build a model where we could test Sallin’s hypothesis and study the relative importance of the heart’s helical structure,” said John Zimmerman, a postdoctoral fellow at SEAS and co-first author of the paper.

To test Sallin’s theory, the SEAS researchers used the FRJS system to control the alignment of spun fibers on which they could grow cardiac cells.

The first step of FRJS works like a cotton candy machine — a liquid polymer solution is loaded into a reservoir and pushed out through a tiny opening by centrifugal force as the device spins. As the solution leaves the reservoir, the solvent evaporates, and the polymers solidify to form fibers. Then, a focused airstream controls the orientation of the fiber as they are deposited on a collector. The team found that by angling and rotating the collector, the fibers in the stream would align and twist around the collector as it spun, mimicking the helical structure of heart muscles.

The alignment of the fibers can be tuned by changing the angle of the collector.

“The human heart actually has multiple layers of helically aligned muscles with different angles of alignment,” said Huibin Chang, a postdoctoral fellow at SEAS and co-first author of the paper. “With FRJS, we can recreate those complex structures in a really precise way, forming single and even four chambered ventricle structures.” 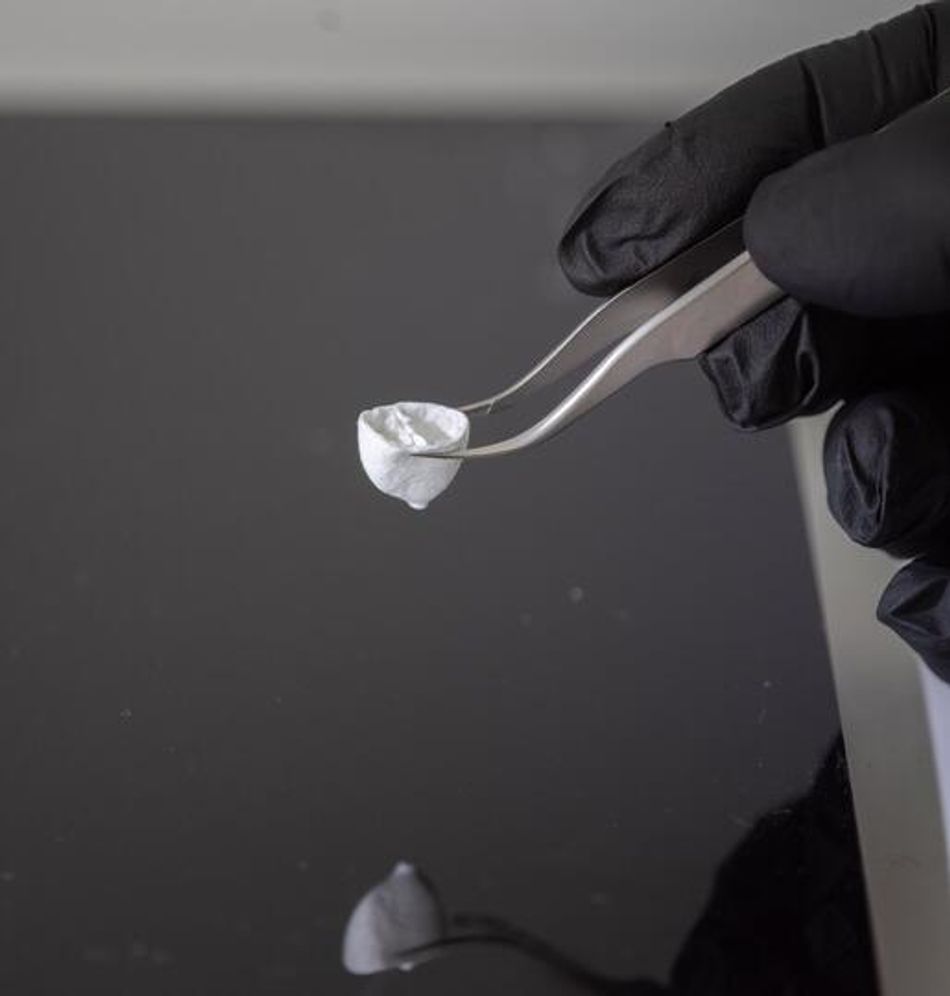 Unlike 3D printing, which gets slower as features get smaller, FRJS can quickly spin fibers at the single micron scale – or about fifty times smaller than a single human hair. This is important when it comes to building a heart from scratch. Take collagen for instance, an extracellular matrix protein in the heart, which is also a single micron in diameter. It would take more than 100 years to 3D print every bit of collagen in the human heart at this resolution. FRJS can do it in a single day.

After spinning, the ventricles were seeded with rat cardiomyocyte or human stem cell derived cardiomyocyte cells. Within about a week, several thin layers of beating tissue covered the scaffold, with the cells following the alignment of the fibers beneath.

"Since 2003, our group has worked to understand the structure-function relationships of the heart and how disease pathologically compromises these relationships,” said Parker.  “In this case, we went back to address a never tested observation about the helical structure of the laminar architecture of the heart.  Fortunately, Professor Sallin published a theoretical prediction more than a half century ago and we were able to build a new manufacturing platform that enabled us to test his hypothesis and address this centuries-old question.”

Parker actually arrived at the University of Alabama Medical Center before Sallin; Parker was born there, and Sallin joined the UAB School of Medicine faculty a few months later.

The team also demonstrated that the process can be scaled up to the size of an actual human heart and even larger, to the size of a Minke whale heart (they didn’t seed the larger models with cells as it would take billions of cardiomyocyte cells).

Besides biofabrication, the team also explores other applications for their FRJS platform, such as food packaging.

A team in the Department of Biomedical Engineering has designed a 3D-bioprinted model of a blood vessel that mimics its state of health and disease, thus paving the way for possible cardiovascular drug advancements with better precision.