Big scientific breakthroughs often require inventions at the smallest scale. Advances in tissue engineering that can replace hearts and lungs will require the fabrication of artificial tissues that allow for the flow of blood through passages that are no thicker than a strand of hair. Similarly, miniature softbotic (soft-robot) devices that physically interact with humans safely and comfortably will demand the manufacture of components with complex networks of small liquid and airflow channels.

Advances in 3D printing are making it possible to produce such tiny structures. But for those applications that require very small, smooth, internal channels in specific complex geometries, challenges remain. 3D printing of these geometries using traditional processes requires the use of support structures that are difficult to remove after printing. Printing these models using layer-based methods at a high resolution takes a long time and compromises geometric accuracy.

Some examples of complex 3D geometries printed with 3D ice, including a helix, tree and a one a half millimeter tall octopus.

Researchers at Carnegie Mellon University have developed a high-speed, reproducible fabrication method that turns the 3D printing process “inside out.” They developed an approach to 3D print ice structuresOpens in new window that can be used to create sacrificial templates that later form the conduits and other open features inside fabricated parts. 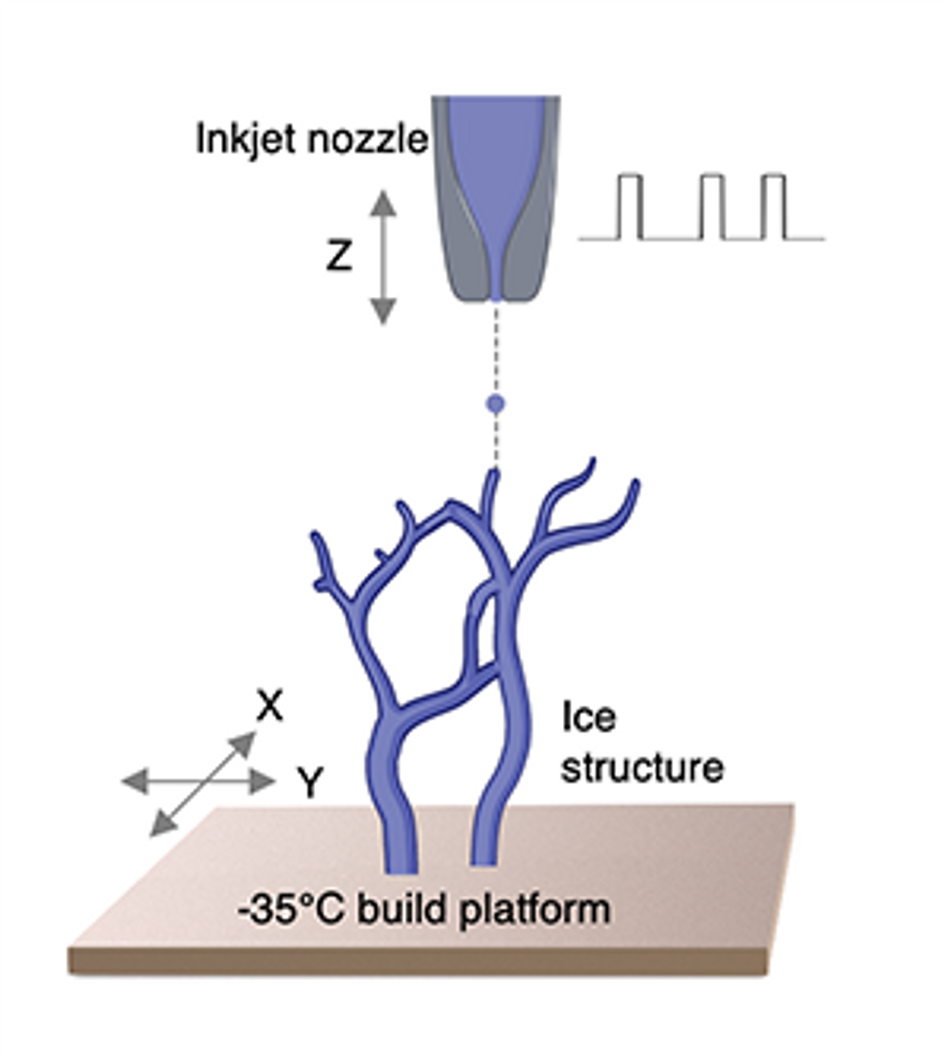 And they are creating these three-dimensional micro-scale resolution structures out of ice. Yes, ice.

As the most abundant substance on the earth’s surface and the primary building block of any living organism, water is exceptionally well-suited for use in bioengineering applications. The simple and rapid phase transition of water to ice provides exciting opportunities for using water as an environmentally-friendly structural material.

“It doesn’t get any more biocompatible than water,” said Garg.

The team uses the printed ice structures as sacrificial templates for “reverse molding” or inside-out 3D printing. The ice structures are submerged into the liquid or gel form of a chilled structural material, such as resin. After the material sets or is cured, the water is removed. For this purpose, the ice can be melted to evacuate the water. Alternatively, the ice can be sublimated by converting it into water vapor without turning it into liquid water. This ability to easily sublimate the ice allows for easy and “gentle” removal after casting and solidifying the surrounding structural material.

The ice templates can be submerged inside light-curable, chemically cross-linkable, or solvent-based polymers as the external material (solid portion). After curing the surrounding matrix, the water is sublimated out to produce the final positive form.

A high-resolution 3D printing system is used to deposit water droplets onto a -35 ◦C custom-built temperature-controlled platform that rapidly transforms the water into ice. By modulating the ejection frequency of the water droplets and synchronizing it with movements of the stage, the new process enables printing branched geometries with smooth surfaces and continuous variations in diameter with smooth transitions. The researchers demonstrate this by printing multiple complex ice geometries, such as a tree, a helix around a pole, and even a one-and-a-half-millimeter tall octopus figurine. The rapid phase change of the water and the strength of the ice enabled freeform 3D printing of ice structures without requiring time-consuming layer-by-layer printing or support structures.

“Controlling so many parameters was challenging,” explained Garg. “We gradually built up in complexity.”

“This is an amazing accomplishment that will bring exciting advances,” commented Ozdoganlar. “We believe this approach has enormous potential to revolutionize tissue engineering and other fields, where miniature structures with complex channels are demanded, such as for microfluidics and soft-robotics.”

Faculty researchers at Carnegie Mellon frequently work together on interdisciplinary teams to solve such engineering and biological challenges.

“One of the wonderful parts of Carnegie Mellon is bringing together people from many different disciplines to develop new approaches and solve problems in unique new ways, which is exactly what occurred here to develop these exciting findings,” said LeDuc.

The researchers acknowledged the great contribution of the late Lee Weiss, who originally constructed the high-resolution 3D printing system. Weiss was a professor in the College of Engineering and School of Computer Science, as well as a founding member of Carnegie Mellon’s Robotics Institute.

While adoption of the 3D ice process for engineering applications such as creating pneumatic channels for soft robotics could be available in as little as a year, its clinical use for tissue engineering will take more time.