One challenge of researching nanotechnology is that you can’t manipulate the pieces with your hands. You can look at computer models, but it isn’t the same as tactile interaction. Models can be 3D printed, but this can be unrealistic for small high schools, universities, or labs that lack the funding required to pay for it.

To tackle these issues, Rebecca Taylor, associate professor of mechanical engineering, and her student Caleigh Goodwin-Schoen are 3D printing models of proteins and DNA and optimizing the designs for affordability. The DNA project was adapted from mkuiper’s product on Thingiverse.

“The point of the physical models is that you can hold them in your hand and play around with them,” Goodwin-Schoen said. “That allows you to analyze the model more easily and get a better feel of how you would work with it in research.”

Goodwin-Schoen, a fourth-year student in the mechanical engineering integrated master’s/bachelor’s program, has been working on this project since her sophomore year. The project combines additive manufacturing, nanotechnology, and education.

I’m using so many different parts of mechanical engineering. It’s really exciting to be able to apply everything I’ve learned, and I feel like I’m learning so much.

“I’m using so many different parts of mechanical engineering,” Goodwin-Schoen said. “It’s really exciting to be able to apply everything I’ve learned, and I feel like I’m learning so much.” The 3D printing method most people are familiar with works by depositing liquid plastic one layer at a time. Goodwin-Schoen’s project uses a different kind, called selective laser sintering (SLS). In these printers, a thin layer of nylon powder is hit with a laser, binding it into a solid mass. Then, another thin layer is added, and the process repeats. The benefit of using SLS is that the final product is equally strong in all directions. One challenge Goodwin-Schoen had to face was the lack of documentation on making connectors using SLS. She’s had to conduct many tests to figure out the best techniques.

Originally, each piece of the model was printed separately. But the cost of printing could be decreased if everything could be printed together. In fact, Goodwin-Schoen says the price would fall from hundreds of dollars to less than one hundred dollars. She came up with a way to weakly connect the pieces so they could be easily separated after printing.

Now, Goodwin-Schoen is working on creating DNA models, which she says could be printed for less than $100. One important aspect of making useful models is finding ways to show how different pieces connect with each other. The connection between the two nucleobases can be represented as having just one degree of freedom, so Goodwin-Schoen chose a simple snap connector that doesn’t allow much movement. The connection between the base and the backbone, however, has three degrees of freedom. She picked a ball-and-socket connector to represent this physical property. 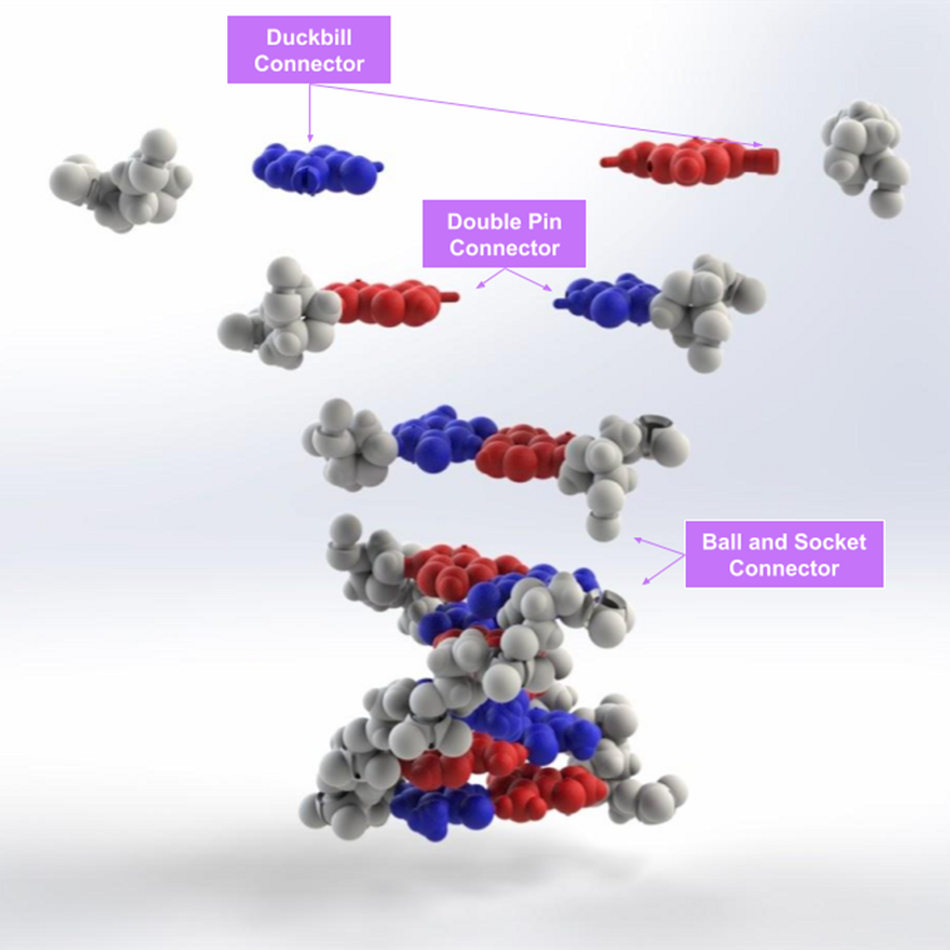 “You can’t tell from a diagram, so it’s pretty cool and pretty useful to just see how all the pieces move relative to one another,” Goodwin-Schoen said. “They sort of zip up and form a DNA structure, and you can stack up structures with them.”

Goodwin-Schoen has also created a post-processing technique to color the models. Adding colors makes it easier to distinguish between adjacent pieces. 3D printing in color gets expensive fast, but she realized fabric dye could be used to make the models more vibrant at a much lower cost.

Next, Goodwin-Schoen will work on creating PNA models. PNA, or peptide nucleic acid, is a synthetic polymer that has a similar structure to DNA. She also plans to create a program that will convert files describing the geometry of a protein into a file that can be 3D printed. This would allow schools and labs without mechanical engineers to make 3D models specific to their classes and research.

“It would be really exciting to see my work be used throughout many classrooms and labs,” Goodwin-Schoen said. “It seems so applicable to research and education, the grounds where all innovation starts.”

A new approach makes liquid-crystal-like beacons out of harmful amyloid proteins present in diseases such as Type II diabetes.

ETH Zurich researchers have created artificial colours by 3D printing certain nanostructures inspired by those of a butterfly. This principle can be used in the future to produce colour screens.