Kyujin Cho at Seoul National University developed the Exo-Glove Poly, a soft wearable robot that addresses paralysis of the hand by enabling people to grasp and pinch various objects. Exo is from the Greek for ‘outside’ and Poly refers to the glove’s being made of polymer. Inspired by human fingers, this flexible, rubber-like robotic glove is superior to bulky exoskeletons due to its lightweight compactness and increased usability.

It is built so that it’s comfortable enough to be worn every day and waterproof for easy sanitization, Exo-Glove Poly has three fingers that fit over the wearer’s thumb, index finger and middle finger, with a soft tendon routing system of wires. The Exo-Glove Poly actuates both fingers in the flexion-extension direction using a tendon-driven actuator. The motor, controlled by a simple switch, pulls on the wires to open and close the hand.  For the thumb, the lab developed a passive thumb structure using thermoplastic and silicone to fix the thumb in an abducted position, essential for grasping. Tendon-driven mechanisms enable us to minimize the size of the system and separate the actuation system from the glove. This requires the user to only wear the glove part of Exo-Glove Poly, and the actuation system can then be equipped on the back of a wheelchair or placed on a table. Design features allow adjustment to different hand sizes and to protect users from injury, as well as taking into consideration price, mass production, wearability, and appearance.

The Exo-Glove uses a glove interface. One of the problems of using a glove interface is that it stretches. To solve this problem, the tendons are attached to the finger by a thimble-like strap made from inextensible fabric.  When the flexor tendon is pulled, the strap pushes the back and tip of the phalange, minimizing the deformation of the attachment points. 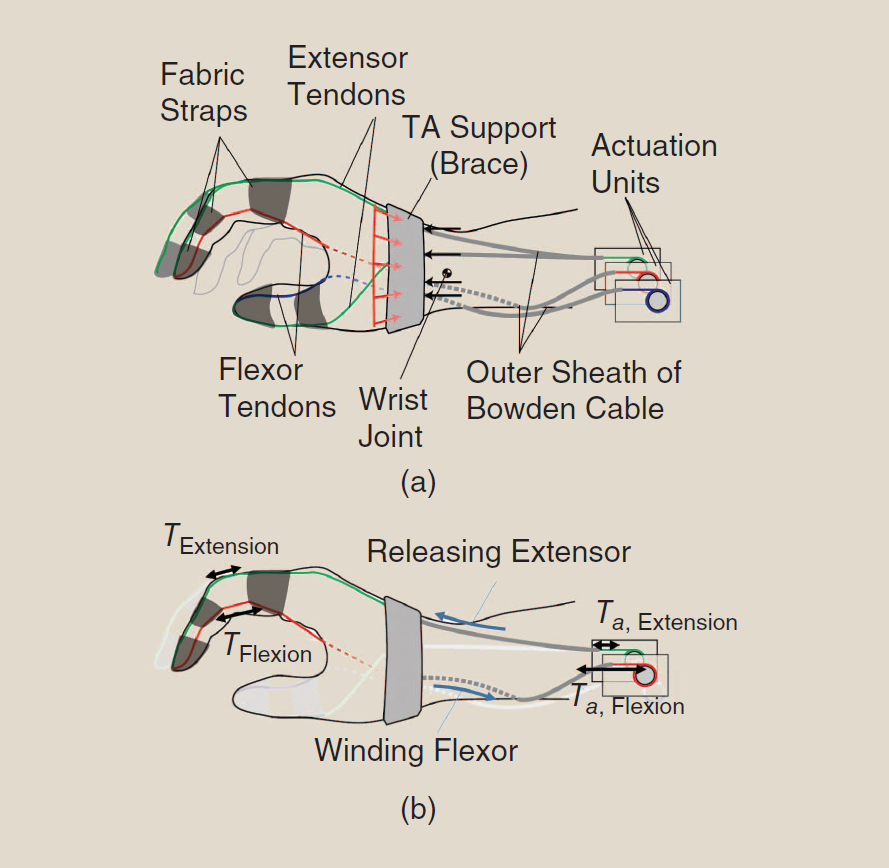 In the hand, the annular ligaments attached to the bone act as pulleys, and they determine the path of the tendons. The Exo-Glove pulleys are made from fabric straps and a Teflon tube and are indicated in gray. The straps are attached to the dorsal side, with their two ends located on the left and right sides of the phalanges. Both ends of the straps are rolled up and stitched to hold the Teflon tubes that minimize friction when the flexor tendons move.

To control the fingers while also isolating them from the movements of the wrist and elbow joints, the Exo-Glove uses a Bowden cable such as that used in the transmission of a bicycle brake. One end of the outer sheath of the cable is fixed to the actuator side, and the other end is fixed between the metacarpophalangeal joint and wrist joint. The inner tendon is then connected to the finger. This is similar to the way that the actuation of a brake lever can be transmitted to the brake regardless of the movement of the handle. Without the Bowden cable, it would be necessary to place the actuator on the back of the hand. In most soft devices, the actuator is fixed by straps and wrapped around the body, which always applies pressure to the skin. To avoid applying continuous pressure, the Exo-Glove uses a thin, rigid brace customized to the shape of the hand to anchor the tendons. When the tendon is actuated, the actuator and the outer sheath of the Bowden cable are forced toward the finger. The brace blocks the Bowden cable from moving toward the finger by applying a normal force to the hand while actuated, thereby firmly fixing the tendon. No pressure is exerted on the hand when the tendon is released.

Operation of the Soft Tendon

These problems are accentuated by friction in a soft tendon routing system because friction considerably increases with pretension. Since friction-reducing components, such as mechanical pulleys or bearings, cannot be installed without greatly complicating the robot, the tendon must slide unassisted through the tendon path. The tendon path is usually also severely curved in a soft tendon routing system, and this curvature further increases friction

Considering that the expected users of the Exo-Glove are people with some type of disability, the input command for the control has been made as simple as possible. In particular, admittance control is used. This control makes the tendon act as a virtual compliant spring, with the single input command being used to determine the pulled length of the virtual spring. Moreover, the compliance characteristic of the admittance control guarantees the safety of the device. Regarding the control input, various types of human-robot interfaces, such as electromyography (EMG), electroencephalography, and analog switches for detecting body motion could be used. 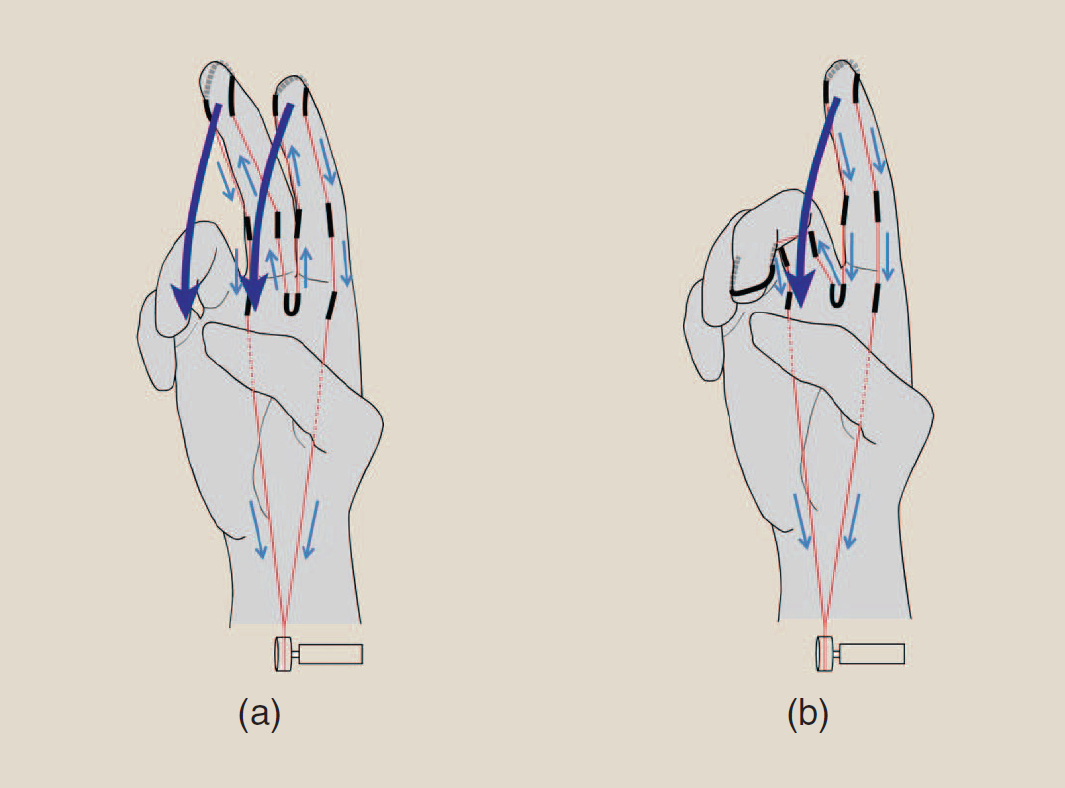 The tendon movement in the Exo-Glove adaptive mechanism. (a) The two fingers move identically. (b) The middle finger is fixed while the index finger moves.

Wrist motion has been considered for the following two reasons. First, wrist motion is easy to detect and is reliable. For example, a simple bend sensor can detect wrist motion with high reliability. Second, people with a paralyzed hand are generally familiar with performing wrist motion to induce finger motion to grasp an object. Wrist motion is connected to finger motion by a mechanism referred to as the tenodesis effect, which is the flexing of the finger when the wrist is extended. It should be noted that the use of wrist motion as control input eliminates one degree of freedom from the movement of the hand, thereby restricting the position in which the object can be grabbed. This issue can, however, be solved by adding another combinable control input. The simplicity of wrist motion makes it a good candidate for the control input for assisting the disabled. Here, a resistor bend sensor installed at the back of the wrist is used to measure the angle of the wrist.

A blog post on the Atlas of the Future describing the Research.

Body hacks is a website dedicated to health and fitness. An article was published on body hacks highlighting the benefits of its research and impact.

The heart of the new soft robot is a 'hysteretic valve', as the researchers call their invention in a publication in the journal Matter.