The first slide shows the battery gap- Ahmed has collected data by year showing that power demand of phones far exceeds the power supply level of batteries, creating a "battery gap" which widens each year as more power-hungry features are added whilst battery technologies imporves only incrementally. Some 70% of power consumption of a mobile phone or tablet is by the display, showing its outsize importance in shrinking this gap.
The second slide shows the improvements in the efficiency (lm/W) of 'released' OLED devices per year. The OLED efficiency has clearly plateaued in produced or released products. The backdot represents the projected potential of microLEDs, showing how the microLED technology can be a game changer.

The third slide shows that there is a gap between EQE of laboratory OLEDs and that of released products. The origins are not clear but likely involve trade-offs neccessary in production and trade-offs between lifetime stability and EQE.

The four side compares the efficiency of GaNw LEDs at various wavelenghts vs organic LEDs (from previous slides). It shows that GaN LEDs offer dramatically higher EQE levels compared to OLEDs at all wavelenghts except red. Indeed, there is a red efficiency gap in GaN microLED technology, the filling of which is the subject of intense global R&D

This charts clearly demonstrate that while OLED technology seems to have plateaued and thus will not likely ever overcome the Battery Gap, the emerging microLED technology offers high promise to do us. Of course development and manufacturing of microLEDs involves other challenges such as rapid transfer as well as high-yield production which we will disucss elsewhere
To learn more about microLED technologies, join the world's first ever specialist technology on the topic. Check out the world-class agenda at www.TechBlick.com/microLEDs 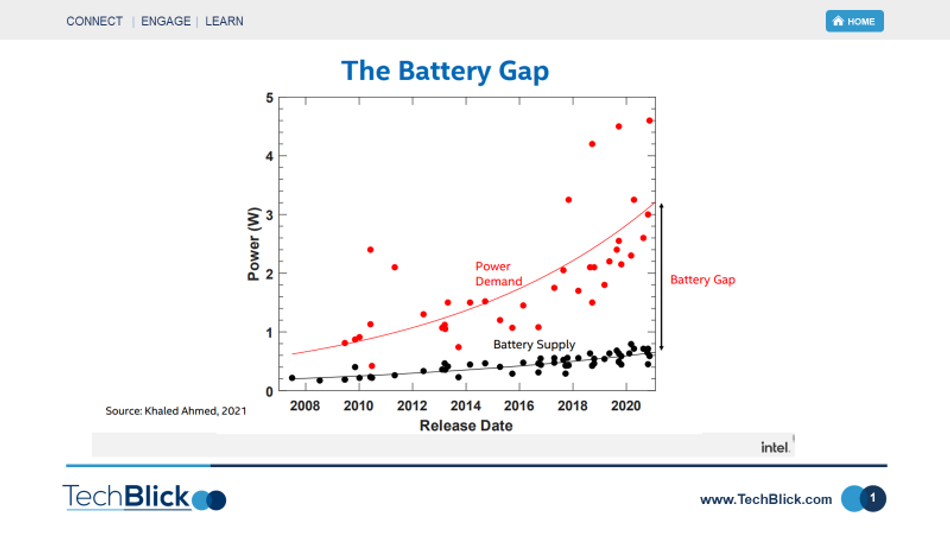 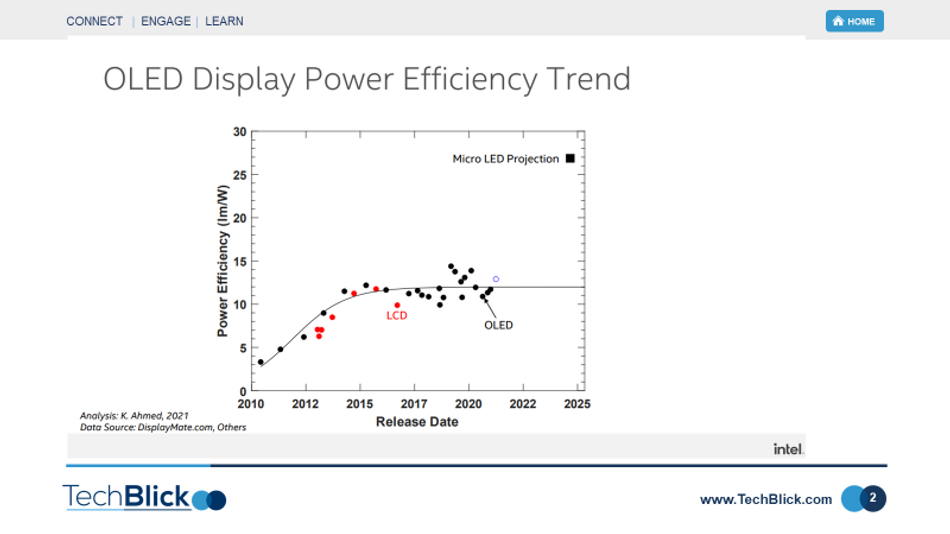 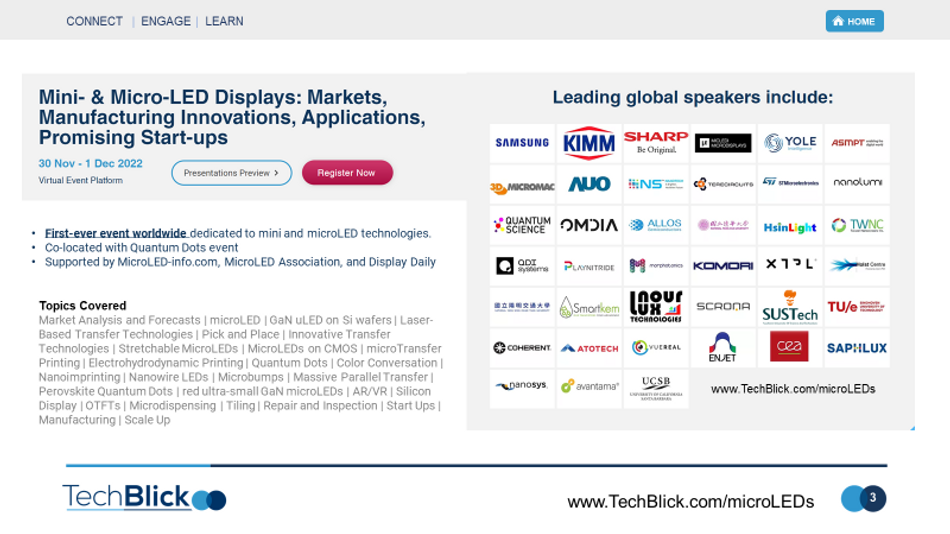 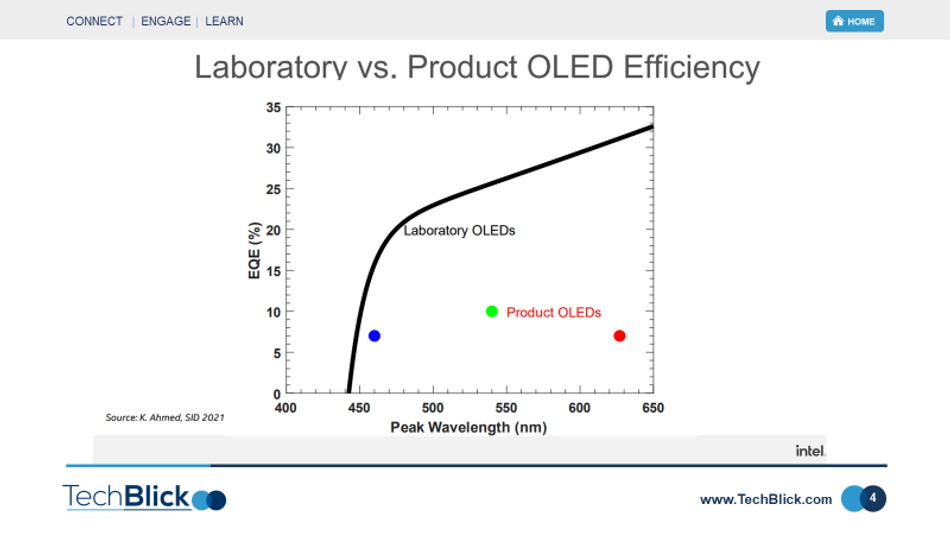 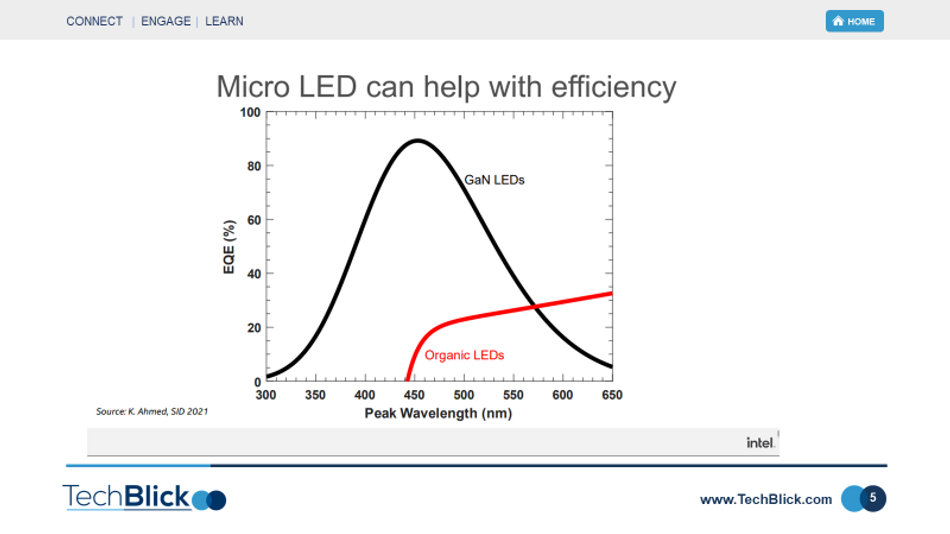 This page is dedicated to bringing you the latest technical, application, and market analysis for the diverse and broad space of additive electronics. This emerging technology frontier encompasses printed, flexible, hybrid, 3D, inmold, structural, stretchable, and wearable electronics.