The level of gun violence in 1993 first moved him to make “Death Star”, at the time composed of “only” 18,000 brass and copper bullets. Twenty-five years and increased fatalities later, he was compelled to create Death Star II.

“The look of the sculpture was inspired by Star Wars and a disco ball, though there was nothing whimsical about the incident that sparked the idea,” says the artist. The impressive 6-foot sphere is studded with 40,054 full-metal-jacket bullets, representing the number of U.S. citizens killed by guns in one year.

Robert Longo didn’t want the bullets to be set in a specific pattern. To ensure even but random positioning of the bullets, each attached by hand, the artist worked with Neoset Designs, a digital fabrication studio entirely dedicated to complex robotic milling located in Brooklyn, New York. The actual engineering of the Death Star was carried out by Brooklyn-based Proptogroup using the pattern generated by Neoset Designs.

The precision of this work was critical to the artist, as any imperfection would distract the viewer’s eye from the overall work. So they used a KUKA robot to drill the holes, but first calibrated the robot to maximum absolute accuracy using Creaform’s C-Track Optical Tracker and RoboDK’s robot calibration software. That process improved the robot’s positional accuracy by a factor of 10.

They then used the C-Track and RoboDK to dynamically monitor and correct the robot’s drill tip position and angle just above the sphere surface before “plunge-drilling” the hole.

Konstantinos Papalexiou of Neoset Designs explains: “We had to fabricate a 6-foot aluminum sphere and then, using a robot, precision drill 40,054 holes into the surface of it into which we would later insert the same number of bullets. In order to maintain precision, we set up a system where we were getting feedback from the Creaform C-Track as to how far from the threshold we were, and then correcting in real time in 3–4 iterations before we plunge for drilling. Of course, a ton of metrology was also taking place every day making sure positioning, progress, etc., was all within tolerance.”

In the Death Star creation process, it is thanks to C-Track that the robot can accurately position itself in space. Along with VXtrack, a dynamic tracking measurement software module, they form a complete portable dynamic 3D measurement solution.

VXtrack simultaneously and accurately measures the position and orientation of multiple objects (in this case the robot tool and the sphere) in space. This makes it possible to analyze and correct position and pose of robot tools with respect to the workpiece.

This align and drill application in the art world has a direct parallel in Align-and Mate applications like the one in this photo: 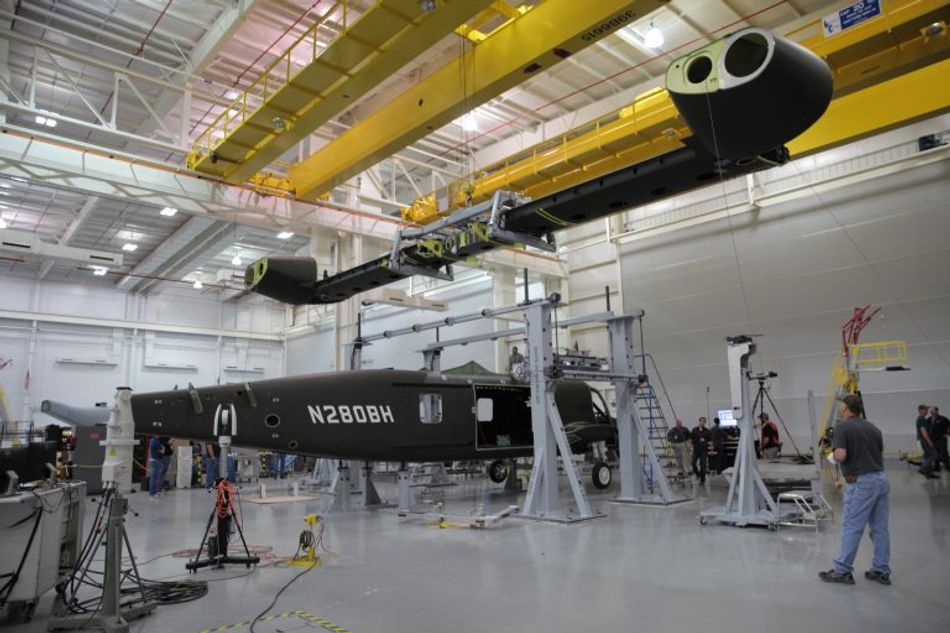 Look carefully and you can see a C-Track monitoring the position and alignment of the V-280 Valor medium-lift tiltrotor transport’s wing and nacelles as they are being mated with its fuselage.

Co-creation between art and digital fabrication can result in powerful mesmerizing work but it takes an artist and robot specialist like Konstantinos Papalexiou of Neoset Designs working with Proptogroup to pull it all together. Robert Longo’s masterpiece “Death Star II” is proof of this. The 2-ton masterpiece took over a year to complete. The sculpture was sold in minutes following the opening for 2 million dollars.

Robert Longo’s Death Star 2018 was presented by The Artist’s Galleries Metro Pictures and Galerie Thaddaeus Ropac at Art Basel Unlimited in 2018. Watch this video that documents the artist’s creative thought process and how he came to integrate industrial robotics, optical tracking and techniques that you would typically see in aerospace or advanced assembly lines to bring his vision to life.

40,054 bullets mounted on an aluminum sphere forcefully conveys the physical and psychological weight of the work leaving the viewers with an unforgettable experience.

Robotics and C-Track made it possible for Neoset to create this work to the artist’s specifications.

The electrification of vehicles has gotten a lot of ink and airtime over the past few years as a compelling alternative to traditional fuel-powered cars and trucks.

Fiberline A/S, a Danish family owned company founded by Henrik and Dorthe Thorning in 1979, is today a world-leading producer of glass- and carbon-fiber profiles.

Measurement of foundry parts with a 3D scanner

During his history the company has undergone a long development of its production focus, which began with foundry production, followed by the addition of mechanical engineering to the decision to product forming machines of own brand in 1925.