The German Aerospace Center (Deutsches Zentrum für Luft- und Raumfahrt; DLR) is developing a new computer architecture that will provide On-Board Computers (OBCs) with more power as well as enabling them to repair themselves.

Reliable and powerful computers play a central role in spaceflight – for example, computer systems in satellites enable sophisticated Earth observation missions. The German Aerospace Center (Deutsches Zentrum für Luft- und Raumfahrt; DLR) is developing a new computer architecture that will provide On-Board Computers (OBCs) with more power as well as enabling them to repair themselves. Distributed heterogeneous OBCs are being created in the Scalable On-Board Computing for Space Avionics (ScOSA) flight experiment project. They feature different computing nodes that are connected to form a network.

A general challenge for computer systems in satellites is that cosmic radiation can interfere with their operation. "If a radiation particle impacts a digital memory element, it might turn a zero into a one," explains Project Manager Daniel Lüdtke from the DLR Institute for Software Technology in Braunschweig. Ultimately, the system can even fail or deliver incorrect results. For this reason, radiation-hardened processors are available for use in space. However, these are very expensive and have only limited computing power. On the other hand, processors such as those used for smartphones are very powerful and also much cheaper. They are, however, much more vulnerable to space radiation. ScOSA integrates both types of processors in one system. 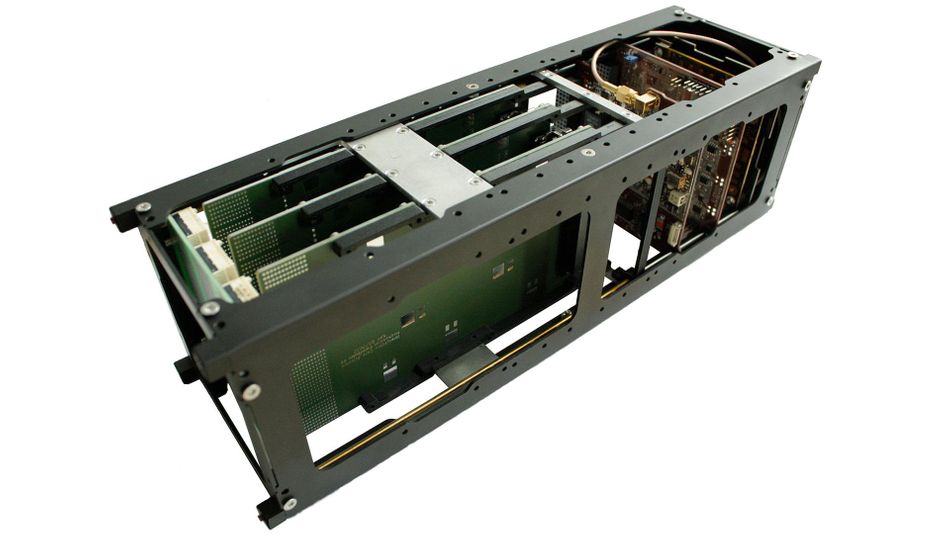 Testing on the OPS-SAT satellite in low-Earth orbit

Special software detects errors and failures, and manages the computers. "In this process, programs running on a faulty processor are automatically transferred to other processors via the network," explains Lüdtke. Meanwhile, the satellite continues to function normally. The software then restarts the processor and re-integrates it into the system.

An experiment on the European Space Agency (ESA) OPS-SAT satellite has now shown that this works. "The satellite, which is 30 by 10 by 10 centimetres in size and contains an experimental computer, has been in low-Earth orbit since the end of 2019. OPS-SAT is available to researchers as a fully equipped and open platform," explains David Evans, ESA Project Lead for the mission.

The DLR researchers installed and successfully tested the ScOSA software on OPS-SAT together with ESA. To do this, the satellite acquired Earth observation images, then processed and evaluated them using artificial intelligence. The satellite then only transmitted the viable images to a ground station. "Sensors with increasingly high resolutions and complex algorithms require more and more computing power," says Daniel Lüdtke, summarising the requirements for software and hardware. A larger ScOSA system consisting of radiation-hardened and commercially available processors will soon be tested on a dedicated DLR CubeSat. This small satellite is expected to be launched at the end of 2023.

Swarms of small satellites could communicate amongst themselves to collect data on important weather patterns at different times of the day or year, and from multiple angles. Such swarms, using machine learning algorithms, could revolutionize scientists’ understanding of weather and climate changes.

There are no easy comparisons to show how accurate the clocks on the Galileo satellites are. Is it a matter of fractions of seconds, or of milliseconds, perhaps? That is far too imprecise. The Galileo system uses atomic clocks that are accurate to the nanosecond.