Photo by Made From The Sky on Unsplash

Researchers at the Harvard John A. Paulson School of Engineering and Applied Sciences (SEAS), in collaboration with colleagues at the University of Cambridge, have developed a new method to dramatically extend the lifetime of organic aqueous flow batteries, improving the commercial viability of a technology that has the potential to safely and inexpensively store energy from renewable sources such as wind and solar.

“Organic aqueous redox flow batteries promise to significantly lower the costs of electricity storage from intermittent energy sources, but the instability of the organic molecules has hindered their commercialization,” said Michael Aziz, the Gene and Tracy Sykes Professor of Materials and Energy Technologies at SEAS. “Now, we have a truly practical solution to extend the lifetime of these molecules, which is an enormous step to making these batteries competitive.”

The research is published in Nature Chemistry.

Over the past decade, Aziz and Roy Gordon, the Thomas Dudley Cabot Professor of Chemistry and Professor of Materials Science, have collaborated to develop organic aqueous flow batteries using molecules known as anthraquinones, which are composed of naturally abundant elements such as carbon, hydrogen, and oxygen, to store and release energy.

Over the course of their research, the team discovered that these anthraquinones decompose slowly over time, regardless of how many times the battery has been used.

In previous work, the researchers found that they could extend the lifetime of one of these molecules, named DHAQ but dubbed the “zombie quinone” in the lab, by exposing the molecule to air. The team found that if the molecule is exposed to air at just the right part of its charge-discharge cycle, it grabs oxygen from the air and turns back into the original anthraquinone molecule — as if returning from the dead, hence the nickname.

To find a more practical approach, the researchers collaborated with chemists at the University of Cambridge in the U.K. to better understand how the molecules decompose and invented an electrical method of reversing the process.

The team found that if they performed a so-called deep discharge, in which the positive and negative terminals of the battery get drained so that the voltage difference between the two becomes zero, and then flipped the polarity of the battery, forcing the positive side negative and the negative side positive, it created a voltage pulse that could reset the decomposing molecules back to their original form. 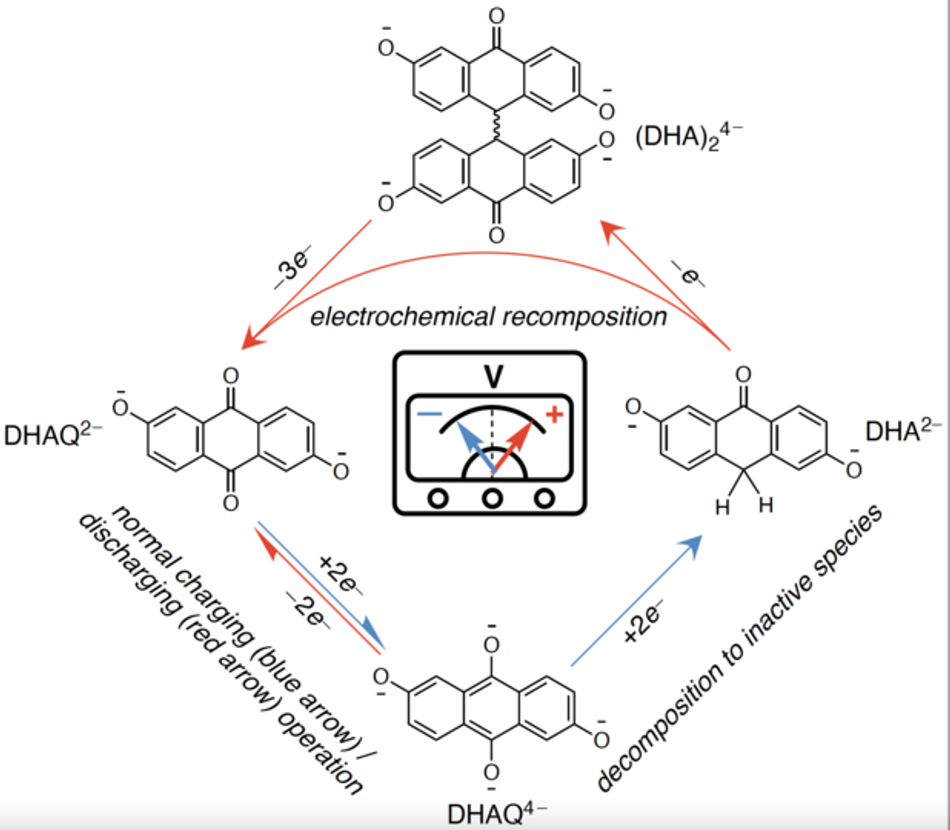 The cycle of decomposition and recomposition. During normal charge and discharge, the zombie molecule oscillates between its DHAQ2- form (left) and its DHAQ4- form (bottom center). When it decomposes, it turns into DHA2- (right). A voltage pulse resets the decomposed molecules (right) back to their original form (left). Credit: Yan Jing/Harvard SEAS

“Usually, in running other kinds of batteries, you want to avoid draining the battery completely because it tends to degrade its components,” said Yan Jing, a postdoctoral fellow at Harvard and co-first author of the paper. “But we’ve found that this extreme discharge, up to actually reversing the polarity, can recompose these molecules — which was a surprise.”

The process works a bit like a pacemaker, periodically providing a shock to the system that revives decomposed molecules.

“Getting to a single digit percentage of loss per year is really enabling for widespread commercialization because it’s not a major financial burden to top off your tanks by a few percent each year,” said Aziz.

Harvard’s Office of Technology Development has protected the intellectual property associated with this project and has licensed the technology and other related patents on quinone flow batteries to Quino Energy, a startup pursuing its commercial development.

The research team also demonstrated that this approach works for a range of organic molecules and for a range of deep discharge processes, both with and without polarity reversal. Next, the team aims to explore how much further they can extend the lifetime of DHAQ and other inexpensive anthraquinones that have been used in these systems.

“Flow batteries can be expected to be the next wave in storage technology beyond Lithium – particularly batteries with organic electrolytes,” said Imre Gyuk, Director of the Department of Energy’s Office of Electricity Storage program. “This work allows control of the decomposition process, thus greatly extending the lifetime and enabling applications for medium- and long-duration energy storage.”

An energy-storage solution that flows like soft-serve ice cream

Researchers make the case for a semisolid electrochemical compound as a cost-efficient, grid-scale battery backup for wind and solar power.