In social insects, such as ants and termites, the communication and coordination to pass information to other members of their species are done using an indirect form of interaction known as Stigmergy. The concept behind stigmergy is the release of a chemical substance referred to as pheromone to convey information. The mechanism for agent-to-agent coordination, each insect modifies the surrounding environment as a result of its action to influence the activities of the other agents without any direct interaction between the agents. In the recent research carried out, there have been a few systems in swarm robotics that replicate this process by introducing the phenomenon of artificial pheromone.

The chemical produced by animals, the pheromone is volatile in nature and starts to fade after being deposited in the surrounding environment because of which the insect keeps releasing the substance over time to reinforce the path trail. The existing research [1] in swarm robotics that mimics the stigmergy mechanism through implementing artificial pheromone has reached several complications. Some of the challenges in prototyping this mechanism are cost-efficiency and difficulty to reproduce and designed to execute a specific mission. Our team of researchers affiliated with the Université libre de Bruxelles in Belgium carried out work to introduce Phormica [2], a system to conduct experiments in swarm robots that enable a swarm of e-puck robots to release and detect artificial pheromone.

In the paper titled, “Phormica: Photochromic Pheromone Release and Detection System for Stigmergic Coordination in Robot Swarms,” we proposed a cost-effective and functional system to conduct research on swarm robots to investigate the collective behaviour based on stigmergic coordination. Thanks to the ability of swarm robots to project UV light on the ground, it enables them to operate on a surface coated with a photochromic substance to change colour from white to magenta when exposed to UV light. These robots can deposit artificial pheromone by switching their own UV light. The developed system has three parts– the surface coated with a photochromic substance, hardware extension for the e-puck robot to emit UV-light beam, and an omnidirectional camera to detect the pheromone in the environment. 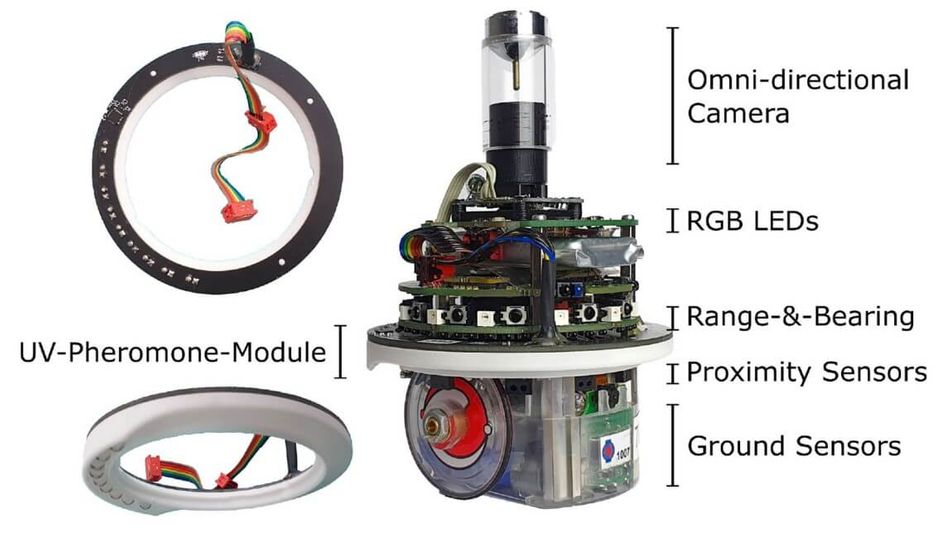 The devised methodology is related to the study proposed by Mayet et. al [3] in which the robots operate on a surface covered by glow paint that glows in the dark if exposed to UV light. However, the research authors limited the work to only demonstrating the feasibility of the system with a single physical robot. “Our experiments go beyond the ones of [3] and comprise a swarm of e-puck robots that use Phormica to achieve stigmergic coordination in three different collective missions,” we explain.

As an inexpensive coating surface material, the prototyping cost per square meter of the artificial pheromone environment is approximately €25. The team uses a swarm of e-puck robots equipped with various computer-on-modules, sensors, and communication modules– the Overa Gumstix, that runs on Linux. The sensors include a ground sensor module to detect the gray-level colour of the floor, an omnidirectional camera to perceive the environment and a range-and-bearing module for communication. The release of artificial pheromone in the surrounding environment is taken care of by two modules– a UV-pheromone module used to deposit the pheromone in the environment, and the omnidirectional camera to detect the pheromone. The UV-pheromone module allows the e-puck robots to project UV light on the floor of the surface-coated environment and is in the shape of a ring that consists of a PCB and a 3D-printed ring that acts as a PCB holder to give mechanical strength. The estimated prototyping cost of one UV-pheromone module is €36.

The onboard omnidirectional camera is able to perceive various colours such as red, blue, green, cyan, magenta, and yellow in a 360-degree field of view. The wide field of view provides the ability to control the robot to perceive pheromone in a given direction. After perceiving the chemical substance, the robot will use the information to move towards that area using a unit vector.

The experiment is done on five e-puck robots to perform tasks on three collective missions– coverage, foraging, and tasking. The two experiments for each collective mission include the robot performing a collective mission without using artificial pheromone and robots taking advantage of the proposed Phormica mechanism using artificial pheromone. “In the three missions, the robots operate in a rectangular arena in which modular RGB blocks [4] are placed as walls,” the team notes. “Each RGB block is 0.25 m long and can display a color according to the mission requirements.”

There are limitations and possible extensions to enhance the usability and prospects of the developed functional system, Phormica.  According to the analysis, the team mentions that an extended UV exposure can damage the molecular structure of the substance and reduce the life span. The results of the performed experiments indicate that the robots achieve stigmergic coordination using the Phormica system. “The technology we proposed in the paper can also be used as a visualization tool to observe motion patterns, various random walks, or other behaviours without the help of any complex external infrastructure,” as we conclude.

The research was published in Frontier in Robotics and AI, Multi-Robot Systems under open-access terms.

I am PhD student in Swarm Robotics at IRIDIA, ULB. Let's talk about collective robotics!