Columbia engineers invent a flat lens that exclusively focuses light of a selected color—it appears entirely transparent until they shine a beam of light with the correct wavelength onto it, when the glass turns into a lens.

As anyone who has recently tried out an augmented reality headset knows, the technology is not yet ready to be part of our everyday lives. Researchers have been working to perfect high-performing augmented reality (AR) glasses, but there are a number of challenges. One major problem with conventional AR glasses is that there is a tradeoff in terms of quality and brightness between the external scene you actually see and the contextual information you also want to visualize. Early solutions like Google Glass used multiple bulky optical components that were partially reflective and partially transmissive to mix the real-world and contextual scenes, with the result of a dimmed and distorted vision of both scenes.

More recent AR head-mounted-display eyeglasses have been patterned with diffractive gratings (fine grooves) with wavelength-sized spacing that deflect contextual information from a miniprojector beside the glasses to the viewer’s eye. But these eyeglasses still dim and distort the external scene because real-world light passing through the glass inevitably gets scattered and dispersed by the gratings. The distortions get worse when several sets of overlapping gratings must be used to handle multiple distinct colors from the miniprojector. AR glasses that perfectly blend the external environment and contextual information for the human eye would be highly useful for many applications. As a head-up display, the technology could give navigation instructions to someone driving a car or feed data from sensors to the pilot flying a plane without requiring them to look away from their windshields. As a head-mounted display, the technology could enable surgeons and soldiers to view information related to their tasks at hand with unprecedented ease and efficiency.

The glass needs to not only be highly transparent over almost the entire visible spectrum, allowing for unattenuated and undistorted vision of the outside world, but also to function as a highly efficient lens that focuses light from a miniprojector into the human eye to form a visual context accompanying the external real-world scene. 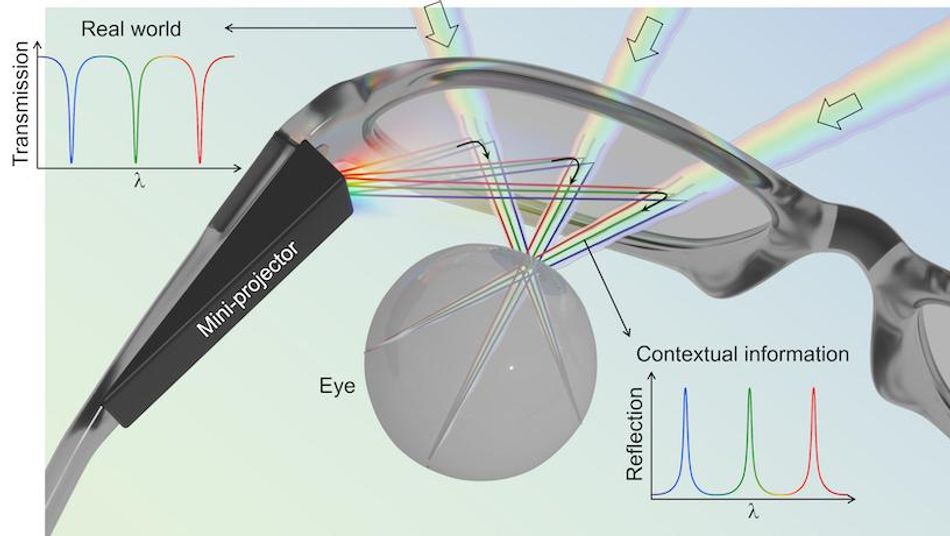 Researchers at Columbia Engineering report that they have now invented just this kind of glass. Led by Nanfang Yu, associate professor of applied physics and applied mathematics, the team has created a flat optical device that focuses only a few selected narrowband colors of light while remaining transparent to nonselected light over the vast majority of the spectrum. The paper was published online August 8, 2022, by Light: Science & Applications.

We’ve built a very cool flat optical device that appears entirely transparent—like a simple piece of glass—until you shine a beam of light with the correct wavelength onto it, when the device suddenly turns into a lens. To me this is optical magic.

“We’ve built a very cool flat optical device that appears entirely transparent—like a simple piece of glass—until you shine a beam of light with the correct wavelength onto it, when the device suddenly turns into a lens,” said Yu, a leader in nanophotonics research. “To me this is optical magic.” 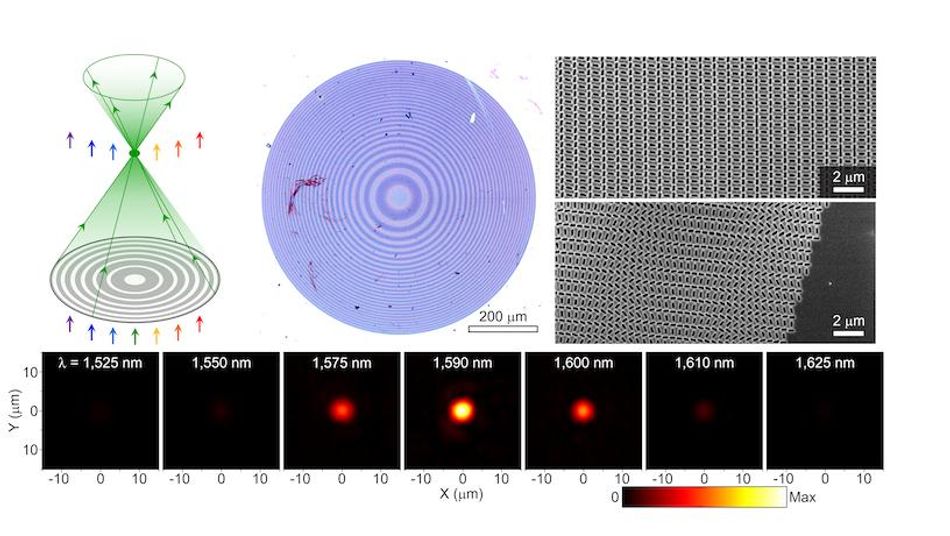 Top row: (Left) Illustration showing the operation of a wavelength-selective metalens, with “green” light being focused, while the other colors are passed without distortion. (Middle) Optical image of a wavelength-selective metalens composed of rectangular apertures etched into a silicon thin film. (Right) Scanning electron microscope (SEM) images of the metalens at its center and edge. Bottom row: A series of two-dimensional (2D) far-field scans shows that focusing is most efficient at the center of the resonance, l= 1590 nm, with the focusing efficiency dropping at the two shoulders of the resonance, l= 1575 nm and 1600 nm, and that the focal spots become almost undetectable at wavelengths tens of nanometers away from the center of the resonance. Credit: Nanfang Yu, Stephanie Malek, Adam Overvig/Columbia Engineering

Yu’s group develops flat optical devices based on metasurfaces—ultra-thin optical components—to control light propagation in free space and in optical waveguides. Metasurfaces are made of two-dimensional (2D) arrays of designer scatterers, called “optical antennas” — a tiny version of radio antennas that have nanometer-scale dimensions. The key feature of metasurfaces is that the optical scatterers are all different optically. The light they scatter can have different amplitude, phase, or polarization, so that metasurfaces can introduce a spatially varying optical response that can control light in extremely flexible ways. As a result, metasurfaces make it possible to realize functionalities that conventionally require 3D optical components or devices with a much larger footprint, such as focusing or steering light beams, or switching optical signals on integrated photonic chips.

Yu’s team invented a “nonlocal metasurface” that can manipulate light waves in distinct ways at distinct targeted wavelengths, while leaving light at untargeted wavelengths unaffected. The new devices exert both spatial and spectral control over light by selecting a color (spectral) and focusing it (spatial) not just at a single wavelength but also independently at multiple different wavelengths. For example, one demonstrated device functions both as a converging lens that focuses light at one color, and as a concave lens that disperses light at a second color, while staying transparent, like an unpatterned slab of glass, when illuminated with light at colors over the rest of the spectrum.

Breaking symmetry to radiate light and shape its wavefront 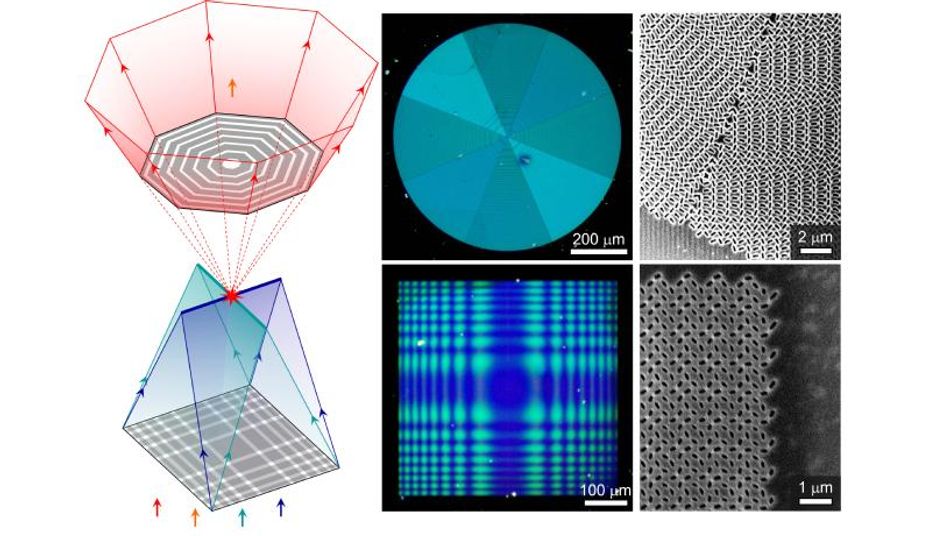 These new devices originated from theoretical explorations by Adam Overvig, a former PhD student in Yu’s group and co-author of the study, into how to manipulate symmetry in photonic crystal (PhC) slabs, such as a 2D periodic structure that is a square array of square holes defined in a thin film of silicon. PhC slabs are known to support a set of modes, the frequencies or colors of which are determined by the geometry of the slab (e.g., periodicity of the array and size of the holes). The modes are essentially a sheet of light that is spatially extended (nonlocal) along the slab but otherwise confined in the direction normal to the slab.

Introducing a symmetry-breaking perturbation to an otherwise structurally repetitive PhC slab, such as simply by deforming square holes of the PhC into rectangular ones, lowers the degree of symmetry of the PhC so that the modes are no longer confined to the slab: they can be excited by shining a beam of light from free space with the correct color and can also radiate back into free space.

Significantly, instead of applying a uniform perturbation over the entire PhC slab, the researchers spatially varied the perturbation, orienting the rectangular holes along different directions over the device. In this way, the surface emission from the device could have a molded wavefront in relation to the pattern of the orientation angles of the rectangles.

“This is the first time that anyone has experimentally demonstrated wavelength-selective, wavefront-shaping optical devices using an approach that is based on symmetry-breaking perturbations,” explained Stephanie Malek, a doctoral student in Yu’s group who was lead author of the study. “By carefully choosing the initial PhC geometry, we can achieve wavelength selectivity, and by tailoring the orientations of the perturbation applied to the PhC, we can sculpt the wavefront of the selected color of light. This means that we can make lenses that focus light of only the selected color.”

The most highly multifunctional and multicolor metasurface yet

The team demonstrated a multifunctional device that shapes the optical wavefronts independently at four distinct wavelengths but acts as a transparent substrate at other nonselected wavelengths. This makes it the most highly multifunctional and multicolor metasurface that has been demonstrated so far, and also suggests that in the future full-color AR displays can be made by independently controlling a few colors of virtual information.

These new wavelength-selective, wavefront-shaping “nonlocal” metasurfaces offer a promising solution for AR technologies, including head-up displays on the front windshield of cars. The optical see-through lens can reflect contextual information to the viewer’s eye at selected narrow-band wavelengths of the miniprojector while also allowing an unobstructed, undimmed, broadband view of the real world. And, because the wavelength-selective metasurface lenses are thinner than a human hair, they are well-suited to developing AR goggles that look and feel like comfortable and fashionable eyeglasses. 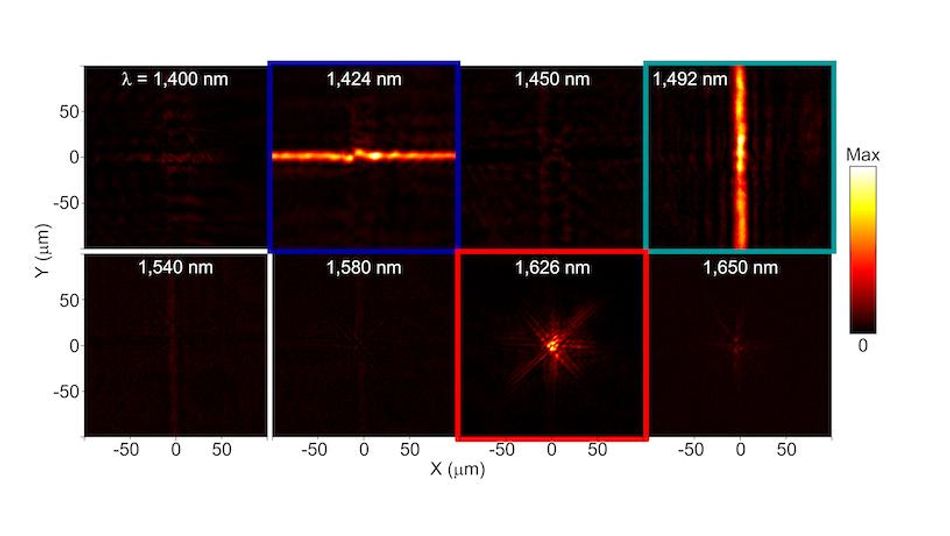 Yu’s flat metasurfaces can also be used to substantially reduce the complexity of quantum optics setups that manipulate ultracold atoms. Because multiple laser beams at distinct wavelengths have to be independently controlled for cooling, trapping, and monitoring cold atoms, these setups can become massive. This complexity has made it difficult for researchers to widely adopt cold atoms for use in atomic clocks, quantum simulations and computations. Now, instead of building several ports around the vacuum chamber for the cold atoms, each with their unique beam-shaping optical components, a single metasurface device can be used to simultaneously shape the multiple laser beams used in the experiment.

What’s next: demonstrating the concept in visible spectrum range

The devices in this study simultaneously and independently control the wavefronts of several near-infrared beams using nanostructured silicon thin films. The team plans next to demonstrate the concept in the visible spectral range, to fully control the wavefronts of three narrowband visible laser beams using a device platform featuring low absorption loss in the visible, such as thin-film silicon nitride and titanium dioxide. They are also exploring the scalability of the wavelength-selective metasurface platform by including more than two perturbations into a single metasurface and by stacking more than two metasurfaces into a compound device.

Device fabrication was carried out at the Columbia Nano Initiative cleanroom, and at the Advanced Science Research Center NanoFabrication Facility at the Graduate Center of the City University of New York.

Concerned Your Smartphone Is Spying on You?

The automotive industry is increasingly one of the biggest adopters of new display technologies.

Researchers have developed the first LiDAR-based augmented reality head-up display for use in vehicles. Tests on a prototype version of the technology suggest that it could improve road safety by ‘seeing through’ objects to alert of potential hazards without distracting the driver.

In three recent papers, engineers report the first demonstration of optical phased array technology on-chip at both near infrared and blue wavelength with applications in a broad range of research areas