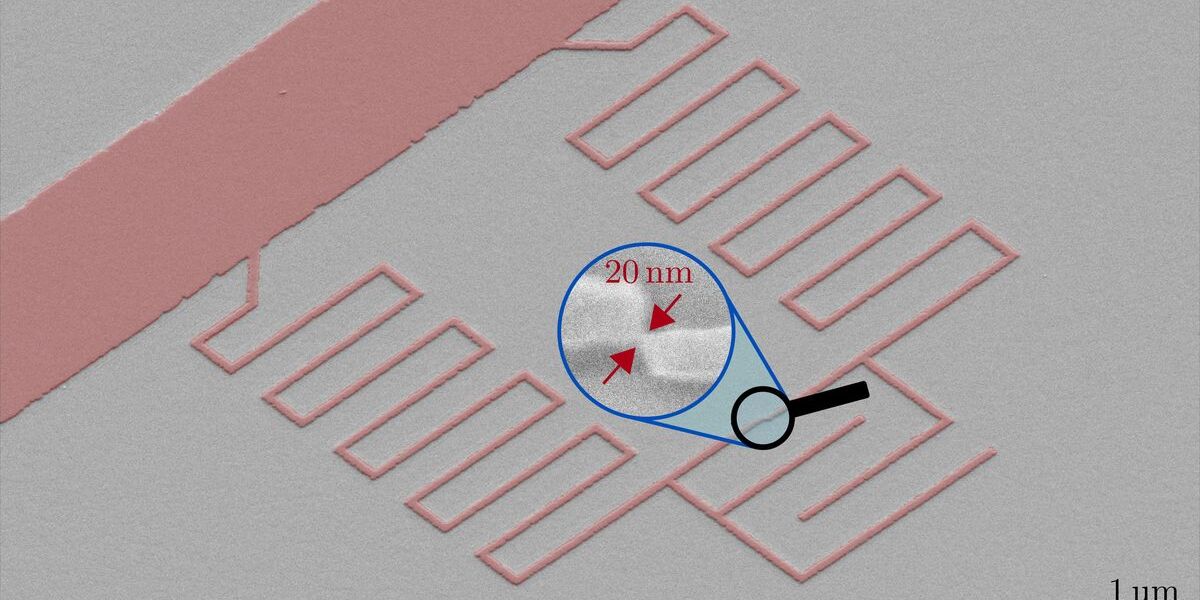 The properties of Gralmonium qubits are dominated by a tiny constriction of just 20 nanometers, which acts like a magnifying glass for microscopic material defects. (Graphic: Dennis Rieger, KIT)

Quantum computers are considered the computers of the future. A and O are quantum bits (qubits), the smallest computing unit of quantum computers. Because they not only have two states, but also states in between, qubits process more information in less time. However, maintaining such a state for longer is difficult and depends in particular on the material properties. A KIT research team has now created qubits that are 100 times more sensitive to material defects - a crucial step in eradicating them. The team published the results in the journal Nature Materials (DOI: 10.1038/s41563-022-01417-9 ).

Quantum computers can process large amounts of data faster because they carry out many calculation steps in parallel. The information carrier of the quantum computer is the qubit. With qubits, there is not only the information “0” and “1”, but also values in between. The difficulty at the moment, however, lies in making qubits that are small enough and can be switched fast enough to carry out quantum calculations. Superconducting circuits are considered a promising option here. Superconductors are materials that have no electrical resistance at extremely low temperatures and therefore conduct electricity without loss. This is crucial for preserving the quantum state of the qubits and connecting them together efficiently.

KIT researchers have succeeded in developing novel and unconventional superconducting qubits. “The heart of a superconducting qubit is a so-called Josephson junction, which is used to store quantum information. It is precisely at this point that we have made a decisive change," says Dr. Ioan M. Pop from the Institute for Quantum Materials and Technologies of KIT (IQMT). Typically, such Josephson junctions for superconducting quantum bits are created by separating two layers of aluminum with a thin oxide barrier. "In contrast, for our qubits we only use a single layer of 'granular aluminum', a superconductor made of aluminum grains a few nanometers in size embedded in an oxide matrix," says Pop. As a result, the material itself forms a three-dimensional network of Josephson junctions. "Excitingly, the entire properties of our qubit are dominated by a tiny constriction of only 20 nanometers. As a result, it acts like a magnifying glass for microscopic material defects in superconducting qubits and offers a promising perspective for their improvement," adds Simon Günzler from IQMT.

All of a piece: Qubits made entirely of granular aluminum

The qubits developed by the team are a fundamental advancement of a previously tested approach with so-called fluxonium qubits. In this previous version, parts were made of granular aluminum and other parts were conventionally made of aluminum. In the current work, the researchers went the decisive step further and produced the complete qubits from granular aluminum. "It's like simply cutting a quantum circuit out of a metal film. This results in completely new possibilities for industrial production with etching processes and expanded areas of application for the qubits, for example in strong magnetic fields," says Dennis Rieger from the Physics Institute of KIT.

The authors also protected this invention with a European patent.

New Sensor to Increase the Number of Trains on the Route

Diamonds are fascinating structures made of carbon – they are harder than any other natural material, they are prized in jewellery, and they can advance quantum computing. One promising area of technological advances in quantum computing is the creation of qubits based on nitrogen-vacancy (NV) centres in diamond.