EPFL scientists are developing a three-legged robot for search and rescue missions that can crawl, roll, jump, and – like a Swiss Army knife – fold away into compact form, all on less power than your standard LED light.

Meet Tribot, the three-legged origami robot designed and built by EPFL scientists. Tri- for three legs and -bot for robot, this super-light critter fits in the palm of your hand, is cheap to build, runs on less than one watt of power, and may one day be deployed in mass for search and rescue missions.

“Hundreds of Tribots could be dropped from the sky into remote areas, and reach places using their three types of locomotion that more expensive and larger robots cannot,” explains EPFL scientist Jamie Paik, head of the Reconfigurable Robotics Laboratory. “It only weighs a few grams, so it’s the perfect robot when weight is a constraint.” 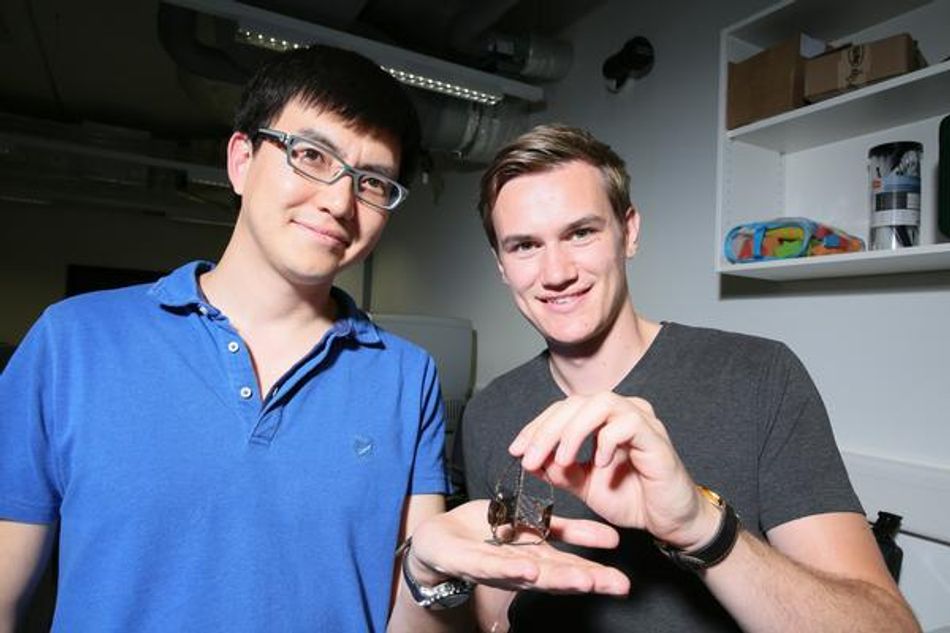 Like a Swiss Army knife, tribots are multi-functional : they crawl, roll, and hop to get around obstacles ­– with a prototype jumping repeatedly as high as 25 centimeters, seven times their size. They can also fold-up into a little package, and unfold themselves into an upright position, even when dropped from high altitudes. The scientists are experimenting with different types of shape memory alloys as actuators for improved energy management.

Now working on a fourth generation of Tribot prototypes, the scientists have come up with a systematic design method that takes into account the robot’s flat and folded configurations, functional materials, flexible mechanisms, and using only 2D fabrication methods, similar to circuit board printing. Such systematic design and integrated manufacturing processes allow for fast prototyping, flexibility in design and choice of materials, which are crucial for creating “printable robots”, leveraging robot mass production that require no manual assembly. The results are published in IEEE Transactions on Robotics.

Some organisms cover distance by growing. Now a robot can, too.

​A newly developed vine-like robot can grow across long distances without moving its whole body. It could prove useful in search-and-rescue operations and medical applications.

Situational or Tactical: Which TIC Do You Need?

Thermal imaging cameras (TICs) aren't new to the fire service. Whether you're remembering that expensive first camera that seemed to outweigh your SCBA or today's more affordable pistol-grip TICs, you know what they're capable of.