The Italian company Blacks S.r.l. was established in November 2011 by a group of young but experienced specialists in composite materials and specializes in the design, prototyping and manufacture of components in advanced composite materials (carbon, glass, aramid, hybrid fibers). The company offers the design and production of composite and metal parts for the automotive, aerospace, marine and sports industry. Blacks customers require extremely high dimensional accuracy. For this reason, the company has always been equipped with 3D measuring tools. The 3D measurement technologies are used on a daily basis in the dimensional control and validation of incoming models, molds and outgoing components. In some cases, the technology is also used in the case of reverse engineering, to support production and design, simplifying the production process.

In order to enhance its metrology equipment, Blacks decided to acquire the portable 3D scanner MetraSCAN BLACK from Creaform. The system convinced due to his scanning speed compared to previously used systems. Besides, no spray needs a be applied on shiny parts and targets are not necessary. The Creaform system is faster, more versatile, and efficient in all situations and can be used for a wider range of applications.

As Blacks already used a wide range of different measurement systems, it was easy to implement the new system, as using the Creaform scanner is very intuitive. The operators quickly became familiar with the new tool and used it quickly to its full potential. Let’s take an example from the racing car starting with the following assumptions:

In these conditions, which frequently occur in the production of prototypes for the motorsport sector, having a real-time control of the gluing, therefore during the adhesive consolidation process, allows to reach the optimal result in the production phase.

This is what Blacks did: “Since the value of the glued assembly was greater than € 15,000, it was decided to proceed with a gluing template and continuous monitoring during the hardening phase of the adhesive, to ensure the correct mutual positioning of the parts.”

Could Blacks have done the same check with the old measurement tool? They are not able to say, as the strong limitation of the opacification of the surfaces has always discouraged them in the attempt.

This particular use of the MetraSCAN 3D differs from the daily use like mold inspection and dimensional control at Blacks, however it demonstrates how it is functional in all cases of gluing prototypes or setting up glued components without the need to create dedicated gluing equipment. 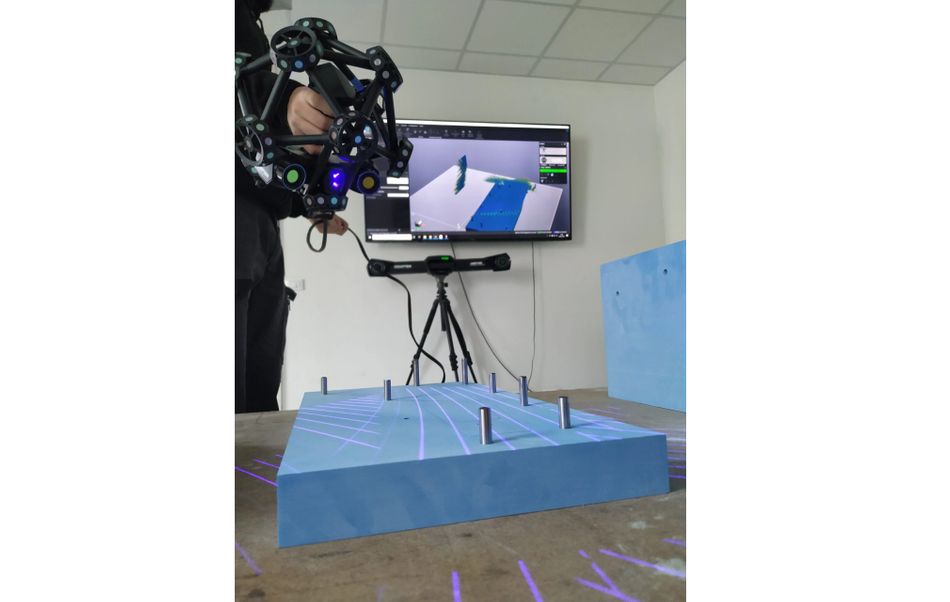 “For sure, we would have been able to complete the described project with another equipment but with higher costs and timing. It has also to be mentioned, that in some cases it is possible that higher costs and timing lead to the loss of the order and that therefore acting with an alternative system such as the MetraSCAN BLACK from Creaform is the determining factor in the project”, comments Daniele Malusardi, Project Manager at Blacks Srl.

“We will continue with the daily use of 3D measurement in the control of molds, models and components, in cases of reverse engineering and gluing of prototypes or one-off pieces. However, we always remain active in the search for innovative application solutions to support production. The strengths of the Creaform system applied to our experience are certainly the great speed of scanning and the versatility of the measurement technology. “

Everything You Always Wanted to Know About Creaform's Measurement Technology Service

Did you know that Creaform has implemented more than 10,000 measurement technology projects and engineering service projects worldwide in the last 15 years? Customers include leading international manufacturers in the aerospace, mass transit, energy, leisure items and consumer products sectors.

Robots Are Invited To Quality Control: How To Tie In Metrology With Robotics?

The optimization of manufacturing processes has become a priority for the vast majority of the automotive and aerospace industries.