Why is asparagus one of the most expensive vegetables in Europe? Because harvesters have to painstakingly pierce each stalk individually. A robot could change this, and engineers at the Bremen Centre for Mechatronics (BCM) are developing one. It works with harvesting tools, which run on precision rails from HepcoMotion – a specialist in linear guidance systems.

Asparagus has been steadily growing in popularity among British consumers, yet for the farmers it means spring time stress. This is because they have to harvest enormous quantities in such a short time – in 2015 according to the Federal Bureau for Statistics it was 112,100 tons. Work in the fields is arduous and workers have to cut through each individual stalk. It is therefore no wonder that farmers find it more and more difficult to get workers, and because of the cost of wages, are only able to offer asparagus at high prices.

Automation is greatly desired, which incidentally has long been taking place in the cultivation of asparagus. It is true that there are numerous approaches, however up to now no machine has been able to outdo humans when it comes to harvesting. Aware of this need, the green asparagus harvesting robotic system project (Garotics) is developing a harvesting robot for green asparagus. The Bremen Centre for Mechatronics (BCM), the packaging machine manufacturer Strauss from Buxtehude, and the British agricultural company C. Wright & Son are also working on this project. 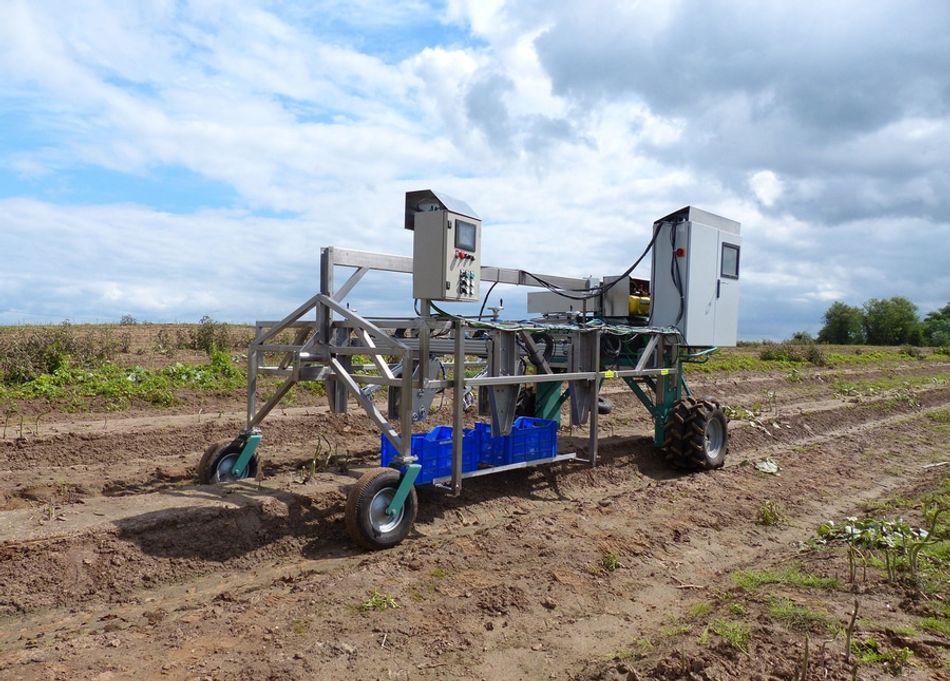 “Green asparagus harvesting robotic system” (Garotics) is able to work for 24 hours in the fields.

The basis of the harvester robot is a chassis with four wheels and a front-wheel drive. In the centre between the front wheels there is a camera system installed, which films the green asparagus stems as it goes past. Unlike white asparagus, green asparagus grows above the ground. Photographic processing software then identifies stalks that are ripe for harvesting. “It wouldn’t make sense to build a type of lawnmower which mows everything down because the stalks grow at different speeds” explains Sebastian Allers, Design Engineer at Strauss. “One of the challenges was therefore to implement image processing which can differentiate the different stages of growth.” 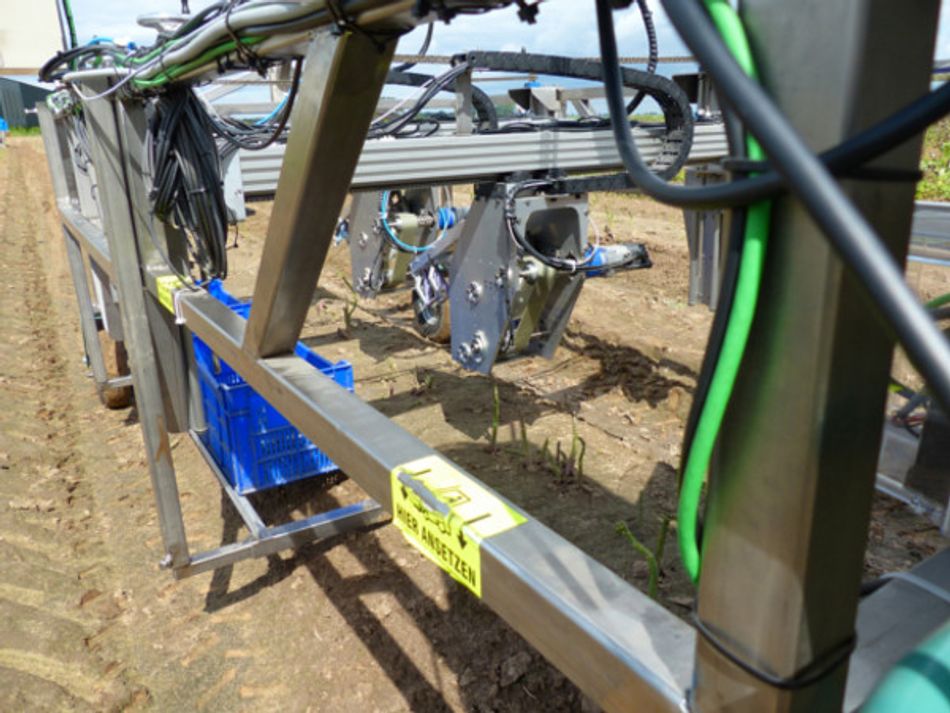 High throughput: Two work tool heads move simultaneously and independently of each other onto two rails positioned one behind the other.

Software then guides the coordinates of the ripe samples further to the tool head, which is mounted under a hardened and precision-cut linear guide rail made of stainless steel from HepcoMotion. The tool head can travel across the full vehicle width from side to side on a timing-belt-driven carriage.

The driving force comes from an AC geared motor with a worm gear, located on the side of the linear guide rail. “The motors of the DLS system can have a power of up to 1.1 kW, this gears a reduction of 5:1 up to 75:1, explains Mark Völkers, Area Manager Field Sales North Germany at HepcoMotion. “This allows driving forces up to 750 Newtons and speeds of up to 1.4 metres per second, with special motors it is possible to achieve 5 metres per second”. The harvesting robot works with two tool heads simultaneously, which can move on two rails positioned one behind the other independently of each other – enabling a high throughput. 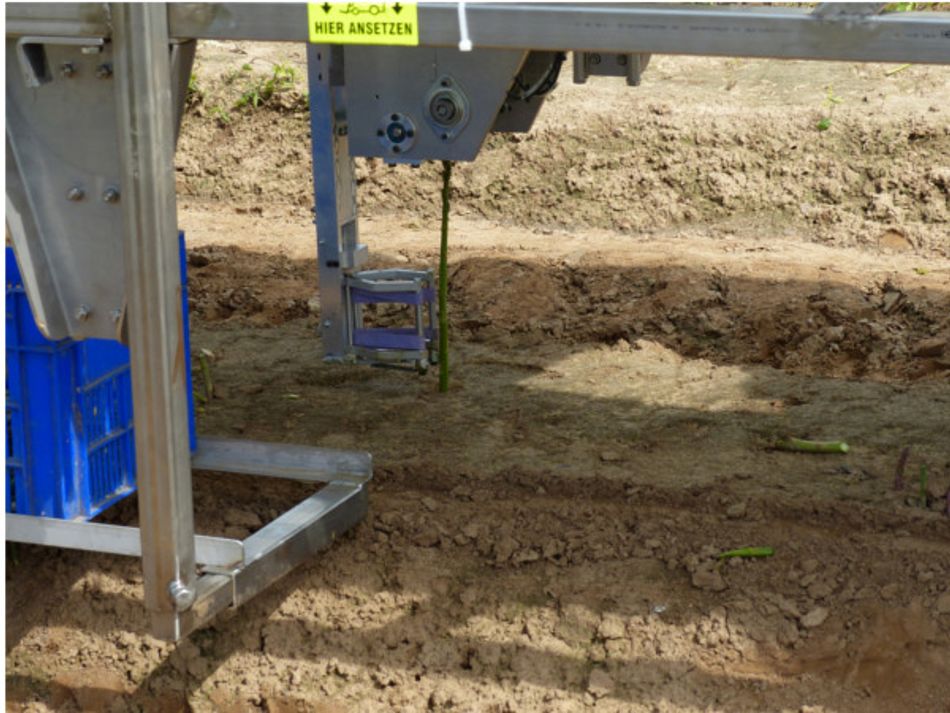 The tool head for harvesting the asparagus stems moves across the whole width of the vehicle via a HepcoMotion belt-driven carriage and a Hepco SL2 linear guide rail.

As soon as the tool head is positioned, it swivels a gripper arm from the back downwards. For this movement the engineers have used another HepcoMotion system: PRT2. The solution involves a spectrum of stainless steel rings and ring segments. They can be linked by straight guide rails to a diversity of open and closed stretches of rail. With the asparagus robot there are 90-degree bends on both sides of the tool head fitted with attached straight pieces. The gripper arm is screwed onto a carriage with V-guide bearings, which are arranged concentrically and eccentrically. These rollers engage from above and below with the induction-hardened V track of the ring segment.

The movement is affected by means of a timing belt which pulls the carriage and gripper arm across the 25-millimetre-wide rail thus producing a pivotal movement. The motor is mounted on the outer side of the tool head. “The special feature is that thanks to the rail system a linear movement and rotation of the gripper are achieved with only a space-saving drive” says Lasse Langstädtler, Research Assistant of the Bremen Institute for Structural Engineering and Production Equipment (bime), in the faculty of Production Engineering at the University of Bremen. “The roller guide also allows the gripper arm to lower relatively quickly, and thanks to the combination of a linear movement and rotation when lowering, it is possible to fit in a small distance between the stalks of two asparagus”.  A slower movement would have to start earlier which could cause the gripper arm to damage any immature asparagus stems which are not yet ready for harvest. As soon as the gripper arm is lowered, a pneumatic cylinder is triggered to drive a shearing off action and simultaneous gripping of the asparagus while the robot continually moves forwards at 0.5 metres a second. The whole tool head then travels to the side and deposits the asparagus on a conveyor belt.

Asparagus is grown in many different countries, which means the environmental conditions are quite diverse (it can be hot or cold, dusty and wet). This was another reason why the engineers decided on HepcoMotion as the system can withstand the rough environmental conditions. “The V-guide principle is virtually self-cleaning” says Völkers. During the carriage’s journey, the bearings push the dirt off the rail.” In addition, unlike bearing circulation systems, there is no need for greasing as all the components are corrosion-resistant. The asparagus therefore never comes into contact with rust. “This is one of the basic requirements that needs to be fulfilled in the food industry.“ 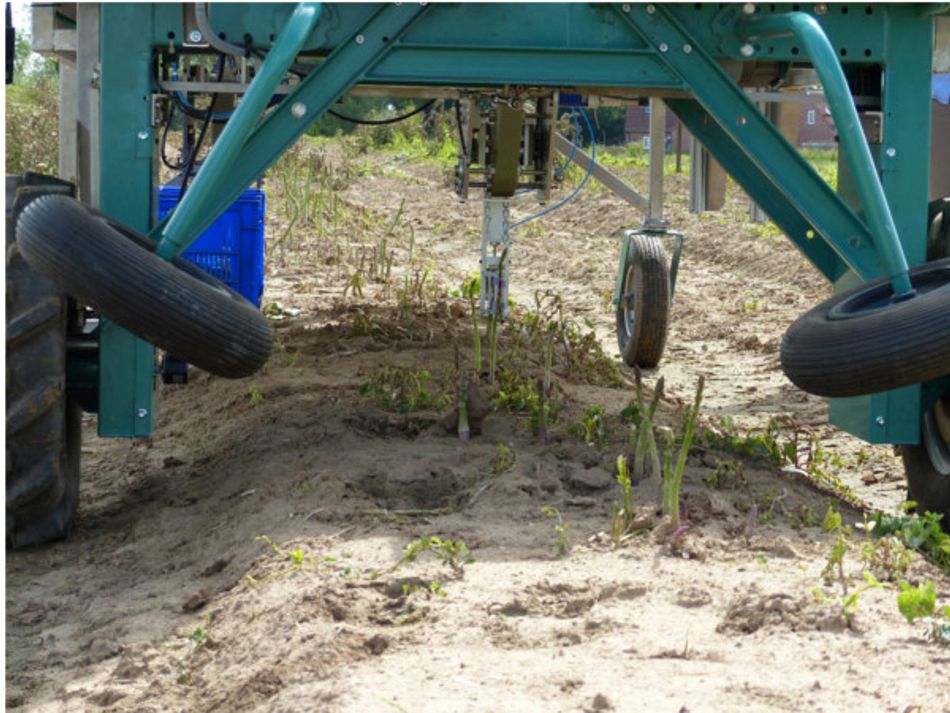 The guide systems can withstand the harshest environmental conditions. The V-guide principle from HepcoMotion is self-cleaning.

The engineers together with their project partner from England, C. Wright & Son have tested the asparagus harvest machine in real conditions. “Among other things with this field test we wanted to find out how long the batteries can supply the machine with energy” says Strauss. One of the challenges is also the speed of the harvesting tools. “Up to now they have been no faster than human harvesters”, but if they had a sufficient supply of energy, they could work in the fields for 24 hours without any problems. This could make harvesting in the future more economic and make asparagus cheaper.

HepcoMotion is a world-leading manufacturer of linear motion systems and automation components. HepcoMotion has been leading the development of V Guide technology since 1969, and continues to develop innovative linear products and track systems that offer new solutions to design engineers.

Working directly with oyster farmers, MIT students are developing a robot that can flip heavy, floating bags of oysters, helping the shellfish to grow and stay healthy.

TerraClear is developing an autonomous system to remove rocks from farmland, making it easier for farmers to get their fields ready for planting.