Heart disease is the leading cause of death among adults and infants in the U.S. with about 659,000 people dying from heart disease each year, every one in four deaths. Among the many patients with a critical heart condition, about 3,500 are waiting for a heart transplant. Many of them will wait for more than six months, and for some of them time will run out before a transplant becomes available. These alarming statistics illustrate the need for more effective heart tissue replacement strategies.

In contrast to other organs that can repair themselves to various degrees after injury, the heart has limited to no regenerative capacity. When heart cells die during prolonged heart disease or a myocardial infarction, they are replaced by a fibrotic scar that compromises the heart’s normal contraction. While modern stem cell technology has enabled production of patient-specific heart cells as a source for tissue engineers, emulating the heart muscle’s highly structured architecture and complex functionality remains a serious challenge. 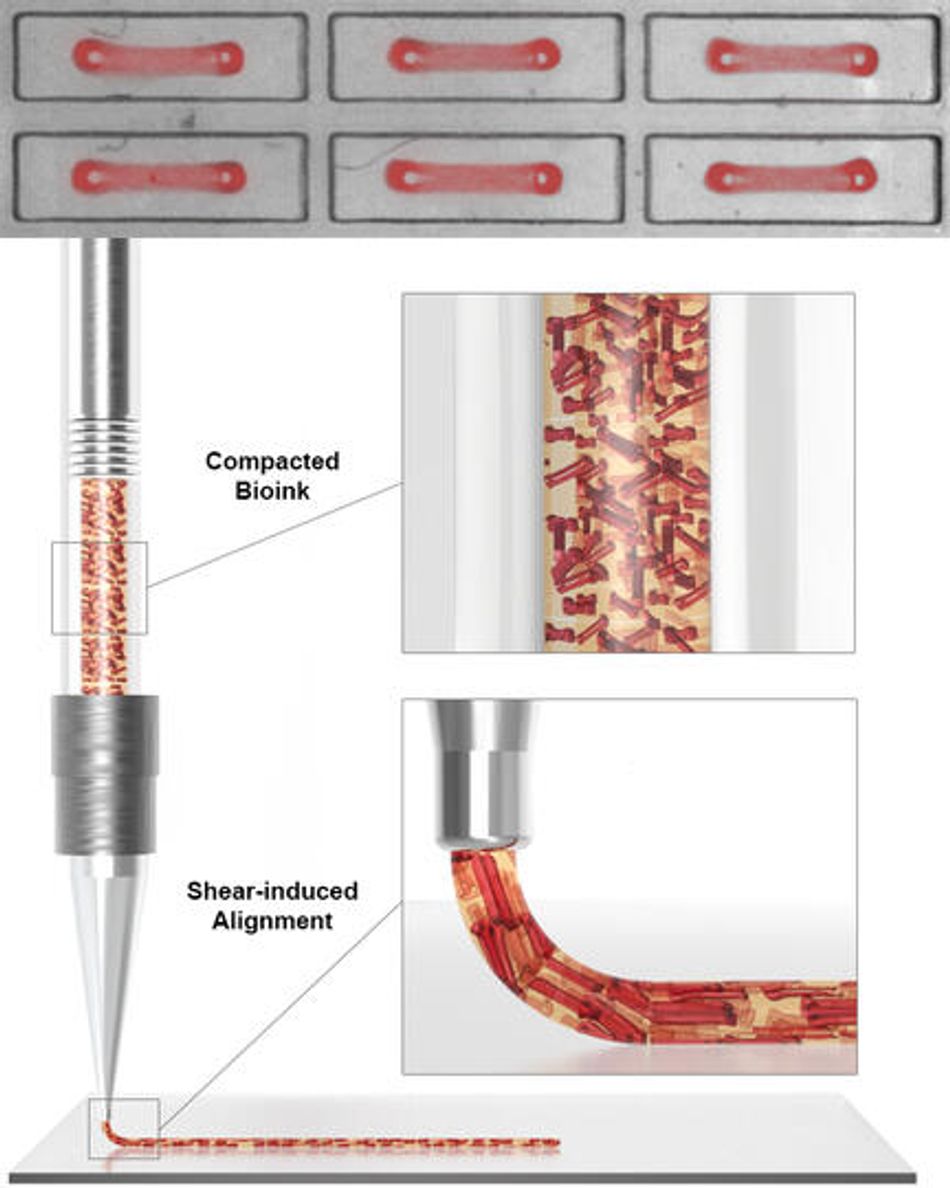 To create layers of aligned contractile human heart muscle tissue, the team first developed a platform with which they could simultaneously generate 1050 individual contractile Organ Building Blocks (OBBs) between two micropillars, using human induced Pluripotent Stem Cells (hiPSCs), human fibroblast cells and essential extracellular matrix molecules (ECMs). The OBBs were then lifted off the micropillars and used as a feedstock to fabricate a dense bioink (lower panel). In a second alignment step the mechanical shear forces generated at the print head during the printing process act on the OBBs while they are being extruded to give them directionality in printed cardiac tissue sheets. Credit: Wyss Institute at Harvard University

The heart’s left ventricle pumps blood through our circulatory system by contracting in a torsional “wringing” motion. This is enabled by layers of cardiomyocytes whose contractile machineries are all aligned in the same direction within an individual layer. Multiple layers are then stacked on top of each other across the 1cm thick heart muscle wall, each oriented at an angle with respect to its neighboring layers. Even though each cardiomyocyte contracts in one direction, the varying alignment of each cardiomyocyte layer causes the ventricle to twist, squeezing the blood within and forcing it to flow to the rest of the body. Tissue engineers have devised different methods to align heart cells on various surfaces but these do not recreate the heart’s intricate alignment, nor can they generate myocardial tissue thick enough for use in regenerative heart therapies.

Now, Jennifer Lewis’ team at Wyss Institute for Biologically Inspired Engineering at Harvard University and the Harvard John A. Paulson School of Engineering and Applied Sciences (SEAS) has developed a suite of new heart engineering technologies that has allowed them to mimic the alignment of the heart’s contractile elements. Using a bioink with densely packed contractile organ building blocks (OBBs) composed of cardiomyocytes derived from human induced pluripotent stem cells (hiPSCs-CMs), they were able to print aligned cardiac tissue sheets with complex and varied alignment. These sheets have an organization and functionality similar to those in actual human heart muscle layers. The findings are published in Advanced Materials. In the future, this advance could enable the development of thick multilayered human muscle tissue with more physiological contractile properties.

The study builds on Lewis’ team’s 3D bioprinting platform, known as “sacrificial writing in functional tissue” (SWIFT), which allowed them to create cardiac tissue constructs that have the typical high cellular densities of normal heart tissue, using sophisticated 3D bioprinting capabilities. The approach makes use of preassembled cardiac organ building blocks (OBBs) composed of iPSC-CMs, and allows them to address another grand tissue engineering challenge – the introduction of a blood-supporting vascular network using sacrificial inks. However, the resulting tissue constructs did not replicate the complex alignment of the human heart.

“To also gain control over directional contractility in engineered layers of heart tissue, we first devised a strategy to program the parallel alignment of iPSC-CMs in developing OBBs,” said first-author John Ahrens, who is a graduate student in Lewis’ group. To accomplish this, the researchers developed a platform with 1050 individual wells, each containing two micropillars. Into the wells, they seeded hiPSCs-CMs in a mixture with human fibroblast cells and the extracellular matrix (ECM) protein collagen, both of which are essential for heart muscle development. Over time as the cells compact the ECM, they form a dense microtissue in which the cardiomyocytes and their cellular contractile machineries are oriented along the axis connecting the micropillars. The OBBs, called anisotropic OBBs (aOBBs) because they contract in one major direction, are then lifted off the micropillars and used as a feedstock to fabricate a dense bioink. The team’s high-throughput approach to the generation of aOBBs also enabled them to fabricate an unprecedented number of contractile building blocks.

The second alignment step is the printing process itself. The mechanical shear forces generated at the print head act on the aOBBs while they are being extruded to give them directionality. “Our lab has previously shown that it was possible to align anisotropic soft materials via 3D printing. Here, we demonstrated that this principle could be applied to cardiac microtissues too,” said co-author Sebastien Uzel, Ph.D., who is a Research Associate on Lewis’ team and mentored Ahrens. To highlight the versatility of their bioprinting process, the researchers printed cardiac tissue sheets with linear, spiral, and chevron geometries in which the contractile aOBBs exhibited significant alignment. 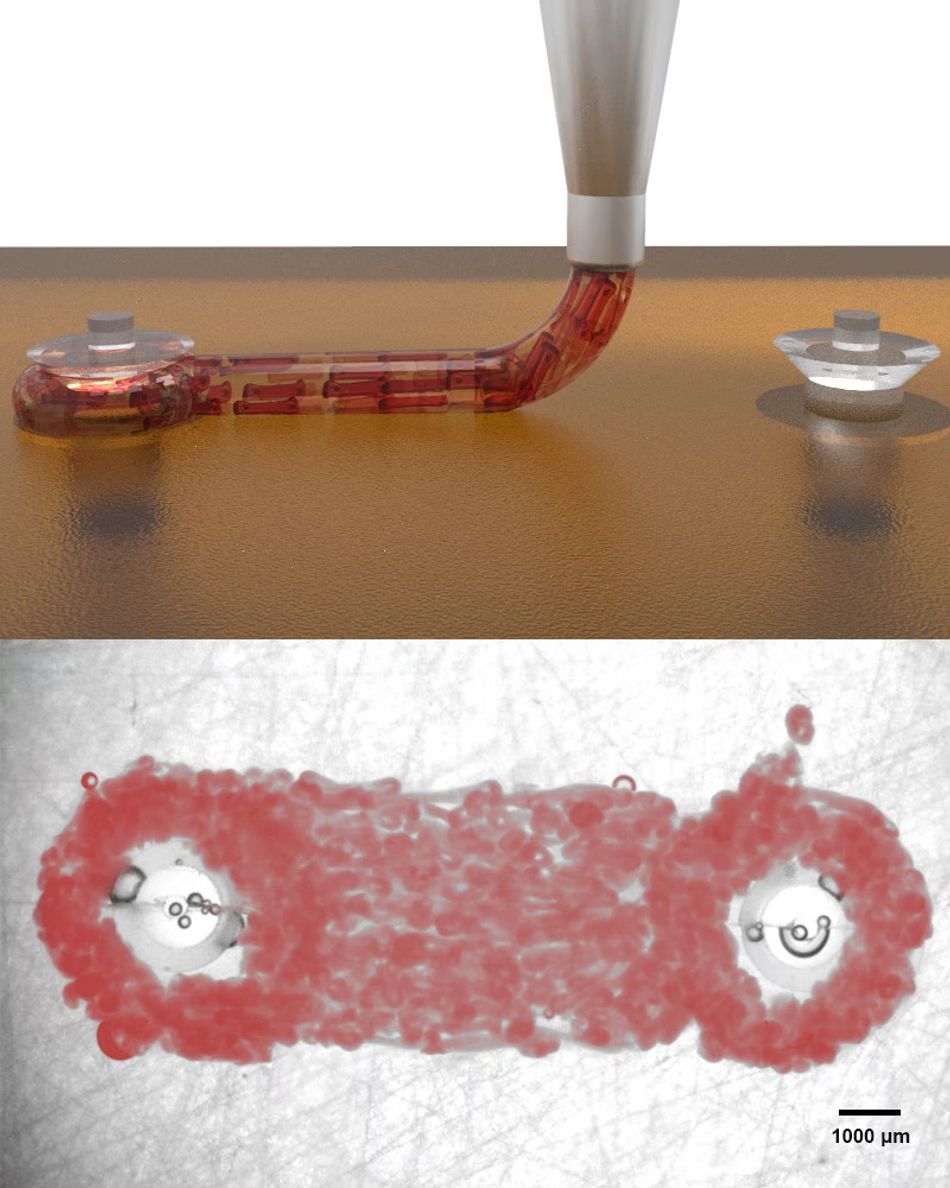 By printing long cardiac macrofilaments connecting two macropillars, the team were able to measure the macropillar deflections caused by the contractile heart muscle layer making up the macrofilament. They found that their contractile forces and contraction velocity (speed) increased over a period of seven days, which showed that the cardiac filaments kept maturing into actual muscle-like filaments. Credit: Wyss Institute at Harvard University

But the team also wanted to be able to measure the contractile features of cardiac constructs printed with aOBBs. For this, they printed long macrofilaments connecting two macropillars, similar to the OBB-generating step using the micropillar platform, only on a larger scale. By measuring the macropillar deflections, they could determine the contractile forces generated by the macrofilaments. The team indeed found that the contractile forces and contraction velocity (speed) increased over a period of seven days which showed that the cardiac filaments kept maturing into actual muscle-like filaments. “With SWIFT, we wanted to address cellular density and tissue scale. Now, by programming alignment, we aimed for mimicking the microarchitecture of the myocardium. One innovation at a time, we are moving closer and closer to engineering functional cardiac tissues for repair or replacement,” said Uzel. For their next order of engineering, the team plans to apply this method to generate more physiological tissues beyond two-dimensional, single layered constructs.

“While the holy grail of tissue engineering efforts would be a whole organ heart transplantation, our approach could enable contributions to more immediate applications. It could be used to generate more physiological disease models, and create highly architected myocardial patches that, like LEGO® blocks, could match and be used to replace a patient-specific scar after a heart attack,” said Ahrens. “Similarly, they could be tailored to patch up patient-specific holes in the heart of newborns with congenital heart defects. In theory, these patches could also develop with the child and not have to be replaced as the child grows.”

“With their methodical approach of confronting and overcoming each new challenge in organ engineering as it arises, Jennifer Lewis and her team in the Wyss Institute’s 3D Organ Engineering Initiative are making enormous advances that are bringing us ever closer to realistic 3D printing of living human tissues, such as heart, that can be used surgically to repair injuries and even grow when used in pediatric patients,” said Wyss Founding Director Donald Ingber, M.D., Ph.D., who is also the Judah Folkman Professor of Vascular Biology at Harvard Medical School and Boston Children’s Hospital, and Hansjörg Wyss Professor of Bioinspired Engineering at the Harvard John A. Paulson School of Engineering and Applied Sciences.

Other authors on the study are present and former members of Lewis’ team, including Mark Skylar-Scott, Ph.D., who was instrumental in the development of SWIFT, Mariana Mata who assisted with most experiments in this study, as well as Aric Lu and Katharina Kroll.

A team in the Department of Biomedical Engineering has designed a 3D-bioprinted model of a blood vessel that mimics its state of health and disease, thus paving the way for possible cardiovascular drug advancements with better precision.