Motion Capture for Analysis in sports

Last year's release of Xsens MVN 2020 updated our world-leading inertial motion capture system with a host of game-changing new features, such as remote on-body recording (rOBR), object tracking, 3D positional aiding, and much more. Already, MVN Analyze users have begun harnessing these new features to achieve incredible results – one such user is Dr. Alex Moorhead, a research scientist and post-doctoral research fellow at the Politecnico di Milano, where he has utilized the rOBR feature to conduct professional sports analysis on junior tennis players.

Completing his master’s degree at the University of Colorado while working at the US Olympic Training Center, Dr. Moorhead has since researched the biomechanics of a broad range of professional sports, completing over 1000 tests and analyses for athletes ranging from swimming, wrestling, track and field, pentathlon and many others – his most recent focus being the performance of professional junior tennis players in Rome. We spoke with Dr. Moorhead about his research into these pro tennis players, and how Xsens MVN Analyze has revealed detailed insight into performance enhancement and injury prevention.

After completing his Ph.D. in Integrated Biomedical Research at the University of Milan, Dr. Moorhead began working at Politecnico di Milano where he was introduced to Xsens when they visited to present their technology. As his work became more widely known, he was invited to research a team of Italy’s very best junior tennis athletes – they were seeking expertise and technology that could guide the enhancement of their athletic performance and technique. With knowledge of various research tools used to study biomechanics, Dr. Moorhead recognized this as a great opportunity to utilize Xsens MVN Analyze for the research. The ability to use the Xsens inertial motion capture suits anywhere with precision allows Dr. Moorhead to capture the dynamic athleticism required in tennis whilst his subjects are on the court.

“Before I had even spoken with Xsens to order the suits, I knew it would be the right tool for the job,” explained Dr. Moorhead. “One of the things I like about the Xsens suit is it holds the sensors in place, providing accurate motion capture  without the need for frequent recalibration, and yet, it allows the athletes to move without feeling restricted. As soon as they had the suits on, they had no issues at all. The MVN Analyze software is also perfect for the post-processing of the data,” he added. 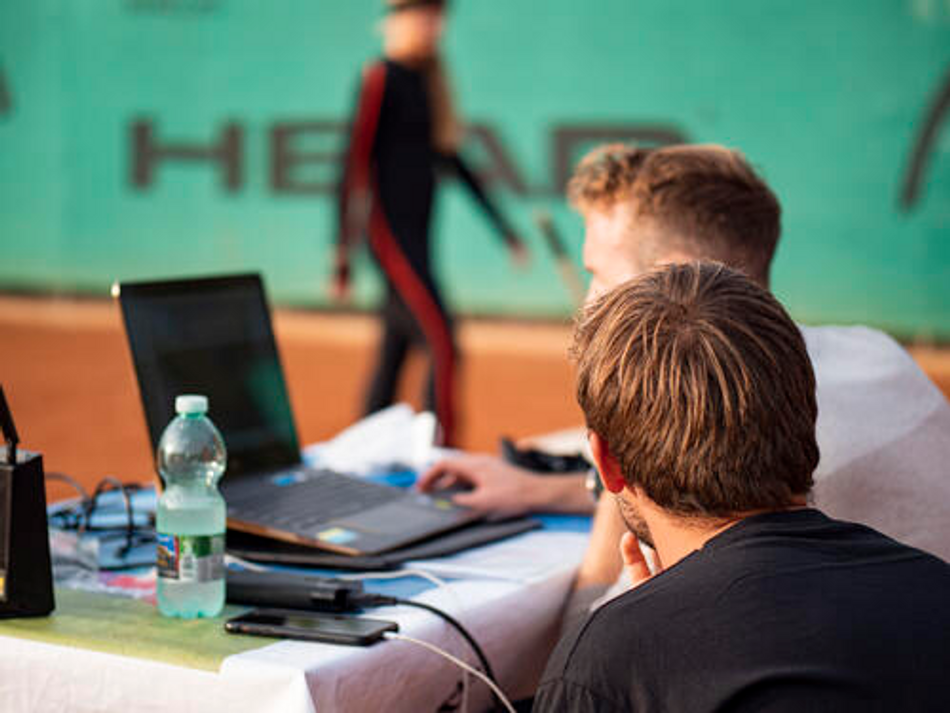 Using the Xsens suits, Dr. Moorhead was able to obtain clean data from the tennis athletes in real tennis court environments and record accurate, repeatable results. Vital techniques, such as the serve, can be analyzed in realistic scenarios.

“From the range of movement and agility testing to actual serves, everything is recorded on the court. We’re trying to find the correlation between service speed, accuracy, and the range of motion in the shoulders – both external and internal with the full extension of the arm and the hip flexors. More than 90% of the tennis match points are decided from the serve or return of serve. So if you can get the most powerful and accurate serve possible, you have a huge advantage,” he explained. 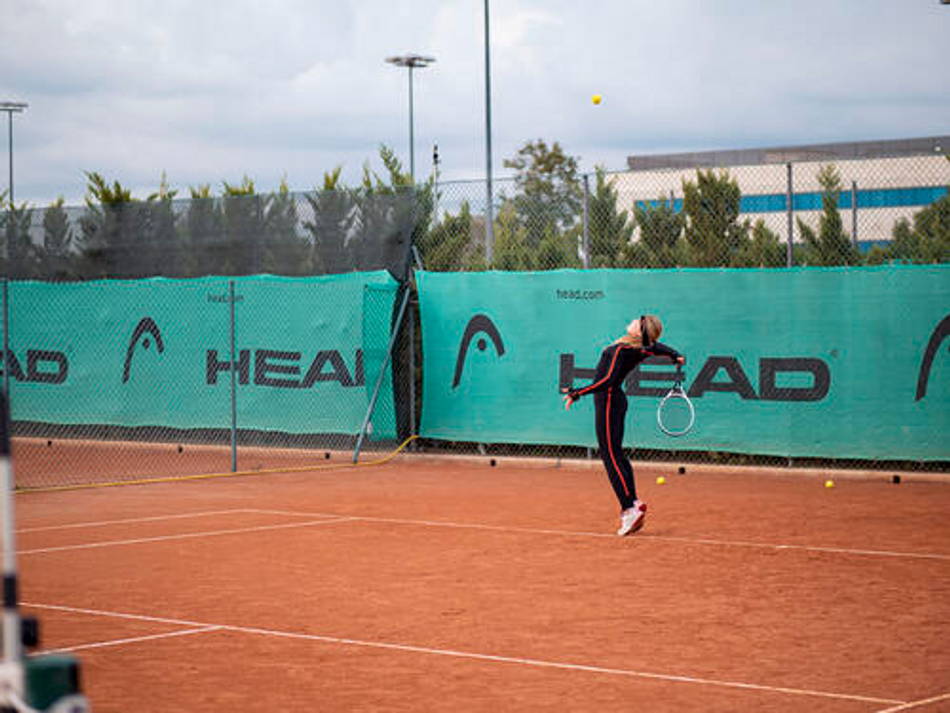 One of several new features launched with MVN 2020, rOBR (Remote On-Body Recording) became an integral part of Dr. Moorhead’s research. The rOBR feature allows full-body motion data to be tracked and recorded using body packs worn by the user, rather than being tethered to a workstation or laptop. This makes it possible to analyze multiple athletes simultaneously and also means data from the body packs can be transferred to the computer later for analysis. The latter made Dr. Moorhead’s research quicker and more efficient.

“rOBR is great. You can watch this data as it’s collected live and stop and cut while the athlete is performing. I ended up transitioning to only using rOBR because of how efficient it was. It makes calibration quicker, it makes it easier to interact with the athlete, and it’s quite nice when you have 12 athletes completing multiple movements. The fact that the data is recorded and downloaded later cuts a lot of valuable time” explained Dr. Moorhead.

Dr. Moorhead uses Xsens MVN Analyze to process his data, with as many as 100 files processed overnight, all before inputting the data into MATLAB software for analysis.

“rOBR will probably be my primary means of using the software in the future. It was so accurate that I didn’t need to check that the movements were fine while assessing. You can interact with the athlete to an even greater extent and you don’t need to monitor a computer the whole time,” he said.

By studying the mechanics of the movement, he realized that the serving motion utilizes many of the same muscles which are activated during an overhead squat (squatting with a barbell fully extended above the head) while also giving insight into the athlete’s active range of motion. By studying the athlete’s overhead squat with an empty barbell while in the Xsens suit, Dr. Moorhead could assess individual flexibility and strength. Improper form or weak links in the kinetic chain can result in poor performance or shoulder injuries, one of the most common injuries found in professional tennis.

“Serving begins with the power of the feet driving into the ground, the kinetic energy then travels through the abdominal muscles, into the shoulder, the elbow, and finally, the hand. Somebody that doesn’t have an efficient or full kinetic chain may attempt the majority of the movement with the shoulder,” he said. “Let’s say there’s no flexibility in an athlete’s hips and ankles for the overhead squat. Power gets lost at these joints and doesn’t get transferred. The subject is then required to produce all of the strength with their pecs and shoulders. You might be surprised to see some of these elite athletes; some of them can’t hold a bar and descend without collapsing at the hips or lifting heels off the ground,” he continued. 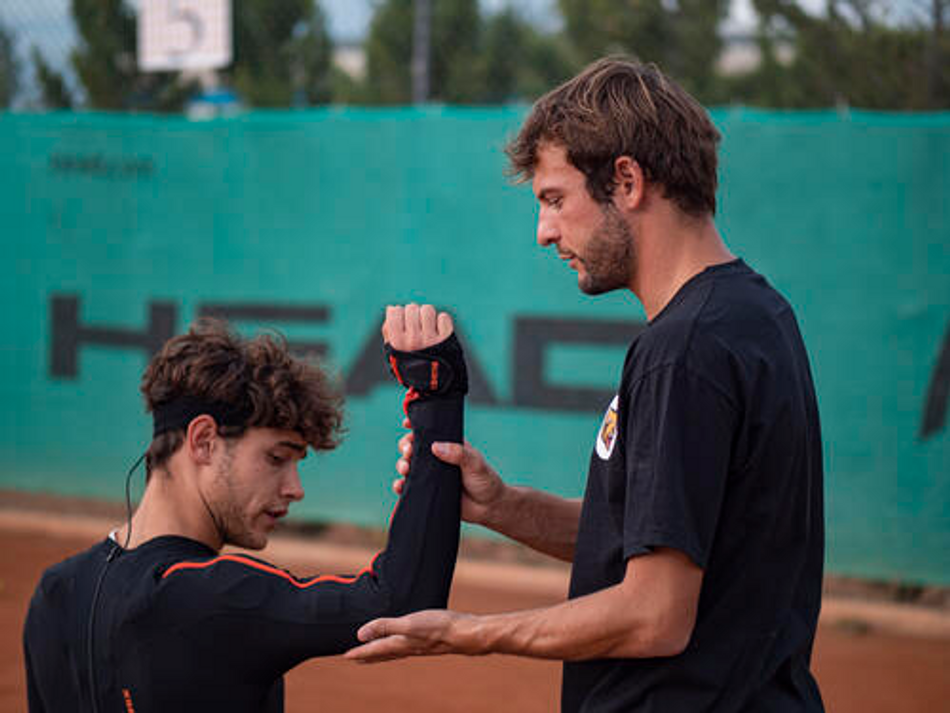 The precision and durability of the robust Xsens sensors make them the perfect solution for professional tennis analysis, and during his research, the sensors provided a means to accurately assess and compare techniques.

“If you then compare a well-performed serve to a less accurate or powerful serve with different movement patterns, you can show they’re exposing themselves to more injuries. This could be mitigated through strengthening of the rotator cuff, opening hips, or strengthening the posterior chain to explode upwards and come down on the ball. By looking at the basic movements using Xsens data, you can piece together the bigger movements one joint at a time,” explained Dr. Moorhead.

Dr. Moorhead was able to utilize the Xsens motion tracking alongside a high-speed video that matched Xsens’ 240 samples per second. This meant he could show how the athletes moved on camera and then relay it with the exact data.

“Athletes are not scientists, so if you can present a graph next to a video then that can make a huge difference. Here, you can see an example of an athlete which performed an Overhead squat. By looking at the maximal range of motion on each repetition, it is apparent that the athlete has diminished flexibility in his right lower extremity. This could be due to injury, or lack of training.” 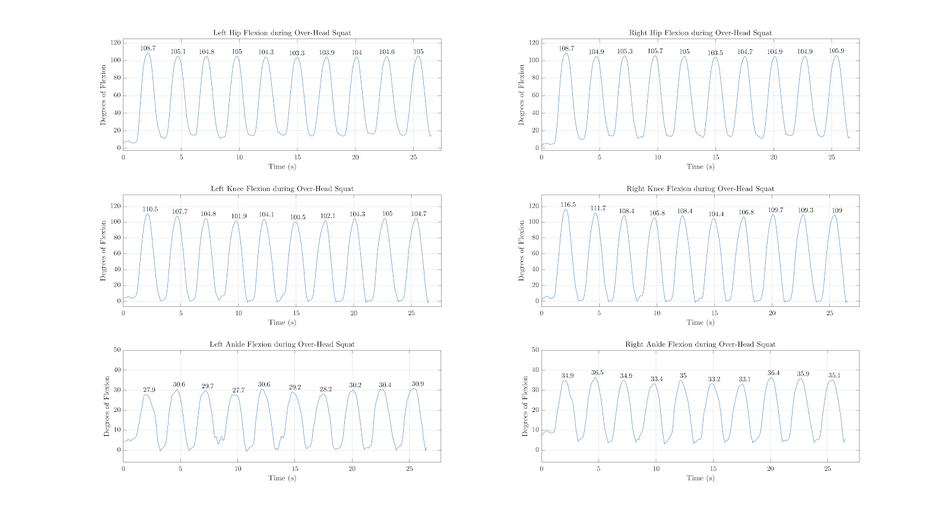 “The Xsens avatar also comes in great use for providing a visual aid when we’re discussing the findings with the athletes,” said Dr. Moorhead. “While athletes can watch a video, seeing an up-close, virtual model of their exact movement which can be rotated, stopped, and replayed, really helps the athlete to perceive what happens during each movement and understand where they can improve,” he added.

So far, Dr. Moorhead has analyzed the first part of the junior athlete’s tennis season, tracking large quantities of biomechanical data. While this data provides an in-depth look into the performance of the athletes, with significant adaptations already being made to technique and performance, the long-term analysis of an entire tennis season will help benchmark performance and create databases for reference.

“This is only the beginning, we want to build a database of normative values. For instance, each sport can have an age range and performance level with data that allows us to predict whether someone may be heading towards an injury or dip in form. We want to avoid injuries, but if they occur, we can use this data to help them recover faster too. We can use this data to improve avoidance of injury in other athletes due to the depth of data and length of time the data was recorded,” explained Dr. Moorhead.

“This is based in hard science and we can significantly improve performance with this data.” 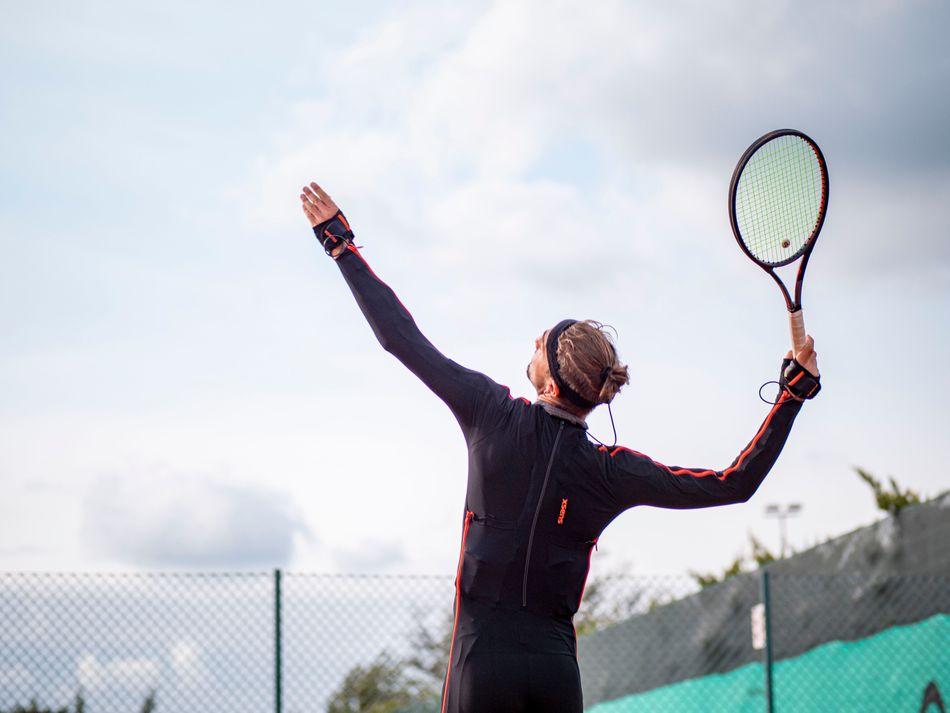 Find out more about how you can utilize MVN Analyze to enhance your sports and biomechanical research here.

Xsens is the leading innovator in 3D motion tracking technology and products. Our sensor fusion technologies enable a seamless interaction between the physical and the digital world in consumer electronics devices and professional applications such as Motion Capture, Motion Analysis, healthcare, spo... learn more