If you’ve ever left a food container in the microwave a bit too long, you’re aware that some plastics don’t handle high temperatures too well. Depending on the vintage and type of container, you might be storing last night’s dinner in polypropylene (PP), polycarbonate (PC), or polyethylene (PE), none of which are heat-resistant superheroes. Polypropylene, for example, begins to lose strength at 82°C (180°F) . Polyethylene does a better job at 130°C (266°F), but even so-called “high-heat” polycarbonate is only rated to 140°C (284°F).

Defining Hot: What is a Heat-resistant Plastic?

As evidenced by the tiny microwave oven symbol on the backs of these containers, each of the polymers just listed is clearly up to the task of heating leftovers. For high-temperature applications, however, something more robust is needed. But what does that mean, exactly? In other words, how hot is hot? The exact answer depends on the application requirements, but for the purposes of this design tip, let's define it as greater than 175°C (350°F).

Let's also clarify that, for the most part, we're talking about working temperatures rather than those needed to melt or crystallise the polymer. That topic is covered elsewhere on our site. Nor are we discussing a polymer’s flame-retardant capabilities. As you'll see, this important attribute has little to do with a polymer's heat resistance.

Consider acrylonitrile butadiene styrene, a common plastic you might know as ABS. A favourite of plumbers and toy makers everywhere, ABS has a Vicat softening temperature—the temperature at which the material loses its “stability-form”—of roughly 219°F (104°C) and a heat deflection temperature of just 201°F (94°C). By adding an organic halogenated compound or other flame retarding compound, these values drop significantly, even though the material is much less likely to catch fire.

So, what are some of these high-temperature polymers? Let’s start with polytetrafluoroethylene (PTFE), better known by its trade name, Teflon®. Discovered by accident at DuPont in 1938, PTFE begins to deteriorate after the temperature reaches about 260 °C(500°F). And despite what was said just now about flame retardancy, PTFE also has an admirable V-0 rating. Although chemically stable and nontoxic at lower temperatures, fume safety should be considered if the temperature could exceed 350°C. It’s hydrophobic (repels water), has one of the lowest coefficients of friction of any plastic (makes it extremely slippery). Plus, it’s highly resistant to most acids, solvents, and other corrosive chemicals.

PTFE is often used as a coating for carpets and clothing, but due to its low coefficient of friction, is also an excellent choice for components such as bearing blocks and housings. PTFE is relatively soft, so easy to machine but has lower dimensional stability owing to its thermal expansion. Because it does not flow when heated above its 620°F (327°C) melting point, however, it cannot be plastic injection-moulded, nor is it 3D-printable.

One heat-resistant thermoplastic that’s both machinable and injection mouldable is polyetheretherketone, or PEEK. With a melting point close to that of PTFE, PEEK retains its mechanical properties—which are quite excellent—at temperatures of 250°C (482°F) or higher (up to 300°C for short periods). It's also resistant to radiation, chemical attack, and hydrolysis. That last characteristic means PEEK can be sterilised in an autoclave, making it a favourite of the medical industry for use in spinal implants and fixation devices. These same properties make it suitable as a food-grade polymer.

PEEK has good dielectric strength, so it’s commonly used as an electrical insulator in semiconductor applications. It is not quite as "slippery" as PTFE but still has a low co-efficient of friction is very wear resistant. It sees extensive service in automotive seals, wear rings, and bearing surfaces. And thanks to its high strength-to-weight ratio and other physical attributes, PEEK often stands in as a replacement for metal alloys in various aircraft components (with a density of 1.32 it’s 1/5th the weight of steel (8) and less than half the weight of most aluminium alloys (3). Like PTFE, PEEK is truly a wonder material…

The Rest of the High-temp

So is polyphenylene sulfide (PPS). Though not on par with PEEK and PTFE in terms of thermal capabilities, it still offers a respectable working temperature of 428°F (220°C). Known to automotive and electrical engineers as Ryton®, this thermoplastic provides a good combination of corrosion resistance, mechanical strength, and dielectric properties. It also flows quite well in plastic injection moulding operations and exhibits minimal shrinkage, both of which make it a good candidate for precision electrical connectors and similar components.

PPS is not a candidate for machined parts, but PPSU is. Polyphenylsulfone (aka Radel®) has a working temperature quite close to PPS, enjoys similar mechanical and electrical characteristics, can be sterilized, and is quite machinable. It's used in aircraft window bezels, surgical instrument handles, hot water fittings, and because it’s FDA compliant (as are the other polymers listed thus far), is suitable for direct contact with food.

Similarly, there’s polyetherimide (PEI), known as Ultem. PEI is both machinable and injection-mouldable and is available in a range of glass fill (GF) levels. With a maximum continuous operating temperature of 340°F (171°C), Ultem is not quite biscuit baking compatible, but it is an excellent, all-around polymer for applications requiring strength, rigidity, solvent and flame resistance, and dielectric properties.

What About Heat-resistant 3D Printing Materials?

Other notable high-temp polymers include Vectra, a type of injection-mouldable liquid crystalline polymer (LCP) commonly used in the SMT (surface mount technology) industry. It offers excellent flow characteristics, can produce parts with very thin walls, and has an operating range of up to 240°C (464°F ). There’s also PC/PBT, a blend of polycarbonate and polybutylene terephthalate able to withstand temperatures up to 130°C (266°F)—nowhere near its counterparts described so far, but still offering a nice balance of toughness and weather resistance, especially where cold temperatures are a concern (as in -40°F, which is also -40°C).

You might be thinking, “But what about 3D-printed parts? What are the options for high-temp materials here?” You’re in luck. Chief among these is a ceramic-like advanced high-temp (PerFORM) stereolithography resin, able to handle temperatures up to 268°C (514°F) after an optional post-curing process. This gives designers the opportunity to prototype strong, stiff parts for use in applications such as wind tunnel testing, rapid tooling, electronic housings, and more. Similarly, PC-like advanced high-temp (Accura 5530) is a translucent material that combines optical clarity with good heat resistance. And like the polycarbonates used for machined and plastic injection-moulded components, Accura 5530 withstands water, chemicals, fire, and electrical effects. 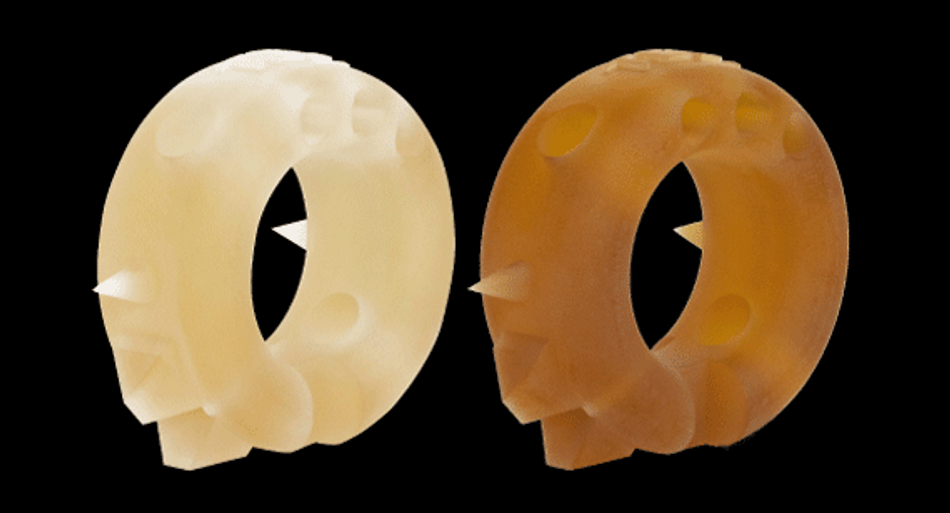 Because each of the engineering-grade polymers discussed here is both strong and stable, there’s little to worry about in terms of design for manufacturability. Some are more abrasive than others and require the machinist to use carbide drills and end mills, while those with very high melting temperatures might require some adjustments to the plastic injection moulding process. Being that all are listed as standard Protolabs materials, though, feedback will be provided during the online quoting process.

We encourage you to check the extensive list of material data sheets available on our website for additional details. With more than 140 polymers and 30 types of elastomer or liquid silicone rubber (LSR) available—some of which can withstand fairly high temperatures—there's sure to be the perfect material for your next project. If you have any questions, drop us a line. Our applications engineers are always available to help at +44 (0) 1952 683047 or customerservice@protolabs.co.uk.

A new method for machining hole patterns has implications for cost and time savings in automobile, construction and tech companies, according to a team of researchers from the Harold and Inge Marcus Department of Industrial and Manufacturing Engineering at Penn State.

Enabling the Developer Ecosystem for Manufacturing

If you were to ask a software developer what the most exciting industry for software will be in the next five years, they might mention retail, or healthcare, entertainment or security, or perhaps Fintech, Edutech, or Agritech.