As with any manufacturing process, injection moulding comes with its own set of design guidelines, and design engineers who understand these best practices will increase their chances of developing structurally sound and cosmetically appealing parts and products.

Here are some common cosmetic defects that occur on plastic injection-moulded parts, and tips on how to avoid them.

As its name implies, sink appears as a dimple or shallow depression on the surface of a moulded part. It’s caused by thicker than normal cross sections, non-uniform part design or an improper gate placement—the doorway through which hot plastic first enters the mould cavity. Some plastics—polypropylene and acetal, for example—are very susceptible to sink, whereas fibre and glass-filled materials are less prone to sink. At Protolabs, we have wall thickness recommendations for each material, and advise that a workpiece minimum wall thickness be no less than 40 to 60 percent of its thickest section. Material flow within the mould should travel from thick to thin whenever possible, which might mean reorienting the mould cavity, or placing the gate in an area originally reserved for a cosmetic surface. 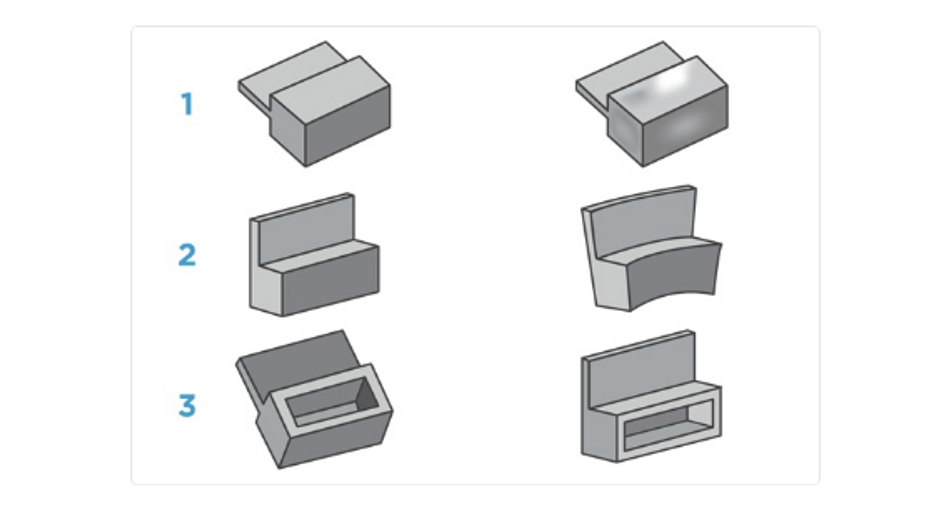 Design a part with walls too thin for the target material and it’s likely to curl up like a potato chip. This is called warp, and is easily avoided by following the same rules used with sink, namely staying within the general wall thickness guidelines. Ironically, the glass-filled materials that work well with sink-prone parts are more susceptible to warp. That’s because, as the part cools, the glass fibres tend to line up in the same direction, creating internal stresses. Parts with internal support structures—gussets to support thin walls, or ribbing of large flat surfaces—fare best against warp.

Look closely at a rubber O-ring and you’ll see a thin line of material at its outermost periphery. That’s a parting line, the seam where the two halves of the mould come together. With free flowing materials such as Santoprene or unfilled nylon, a small amount of flash can sometimes ooze into the seam, and often requires trimming once the part has cooled. On a donut shape such as this, there’s little choice over the parting-line location, but many orthogonal parts have sharp corners, which make a clean, crisp junction at which the mould can separate. Flash or no, you should expect a parting line on most moulded products, but we will identify the parting line location on your ProtoQuote, and may suggest ways of modifying the part geometry to avoid one.

From Honey Beige to Cornflower Blue, we stock more than 40 standard colourants. These are mixed with natural resin pellets immediately prior to the moulding run and are usually quite close to the target colour, but the final product may vary due to the polymer being used, texture and polish of the tool, and swirling during the mixing process. If you want an identical colour match on your parts, it would be best to purchase colour-matched, pre-compounded resin from an external vendor. We accept most customer-supplied resins sent our way.

Worried about those fine lines that look like hairline cracks in your injection-moulded part? Don’t be. Those are knit lines, formed when two opposing flows of material join together in the mould cavity. Commonly seen at the edge of a hole or other cored feature, knit lines are—as a rule—purely cosmetic, but may create a physical failure point if present in an area of the part that receives substantial stress, such as the head of a screw. In this case, designing a strengthening boss feature around the hole is a good precaution, or just skip the hole entirely and drill it afterwards.

If you select a PM-F0 non-cosmetic finish on a tool, the finished part will likely show small, circular, end-mill marks and tool transition lines. If you need a surface finish that’s more cosmetically appealing, it’s generally a simple, if more expensive, matter to manually polish the tool. A PM-F1 finish removes most tool marks, while an SPI-A2 will be smoother than a fresh jar of peanut butter. Texturing via bead blasting is another option, which generally leaves a uniform matte finish, except in thicker areas, around knit lines, and in darker materials. Bear in mind that deep slots and cavities are difficult to reach for polishing and texturing, and that fine finishes may impact quick turnaround time because of the additional effort needed for polishing. We offer seven surface finish options to choose from for injection-moulded parts.

Sufficient draft is an important part of any mould design, and quick-turn tooling is no exception. Vertical walls, meaning those part surfaces parallel to the direction of mould operation, should have a minimum draft angle of a 1/2 degree, and 2 degrees is even better; heavily textured surfaces may require 5 degrees or more. Without proper draft, part ejection becomes difficult if not impossible, and drag or scrape lines may occur.

Gate vestige is that small ugly spot at one end of the part left by removal of the gate after moulding, usually with a side cutter or razor knife. It’s an unavoidable fact of injection moulding. The only thing, for the most part, that can be done to avoid it is orienting the part in the mold such that cosmetic surfaces are unaffected—when moulding a Statue of Liberty replica, for example, the gate should be placed on the soles of Lady Liberty’s feet. When submitting a design to Protolabs, always be sure to speak to an applications engineer to be sure surfaces that require a vestige-free appearance can be accommodated. We may have options to change a gate style depending on the material and part geometry. It is much easier to do this during the review stages rather than after the mould design stages have begun.

There are several miscellaneous problems that can crop up with injection moulding, several of which can be tied back to wall thicknesses that exceed general recommendations:

Thankfully, most of these issues can be resolved through slight modifications to part design and/or selecting a different material. Difficult part geometries often require fine-tuning of the moulding temperature, injection speed, hold times, or all three. Material selection also plays a big part with cosmetics. Two examples of this are polypropylene and HDPE, which tend to sink more than polybutlylene or acetal, but flow better into small part details. It is possible to test different materials using the same mould, but unfortunately shrink factors may prevent parts from having dimensions that match the CAD. In some cases after testing multiple materials, a new mold may be required for further testing or production parts.

The good news is that we’ve manufactured more than 50,000 moulds. We’re quite familiar with the good, the bad, and the ugly of injection moulding, and can steer your quick-turn project in the right direction. Our free online design analysis on your uploaded CAD model provides valuable recommendations on improving the manufacturability, and our experienced applications engineers are always available to help at +44 (0) 1952 683047 or customerservice@protolabs.co.uk.

How to create consistency in injection moulding part production through detailed, scientific processes.