Additive manufacturing, or 3D printing, has brought with it the ability to customize creations in ways never before possible. Shapes, materials, and colors can all be programmatically altered before short production runs of as little as a single unit — but work at the Massachusetts Institute of Technology is looking to take things a stage further through the use of lenticular lenses.

Known to most as the secret behind those “3D” bookmarks and posters available from at least one stall at every market in the world, lenticular lenses allow for different images to be seen when a surface is viewed from different angles. The MIT team has not only developed a way to print these lenses on a 3D printer, but also created software to make their design as easy as possible — demonstrating the project’s potential with devices ranging from a kettlebell that lets you know when your form is good to secret-message shoes designed to cheer the wearer up.

Lenticular lenses work by magnifying the surface beneath, making it so different parts of the surface are visible from different angles — and are typically limited to two-dimensional objects like posters or CD covers.

“One reason why lenticular prints do not yet exist in the form of 3D objects is that up until recently,” the researchers explain, “no fabrication process existed that was able to manufacture the lenticular lenses and high resolution color patterns on doubly curved surfaces. However, over the last years, multi-material 3D printers have been developed that can print with a multitude of materials and in high-resolution color.” 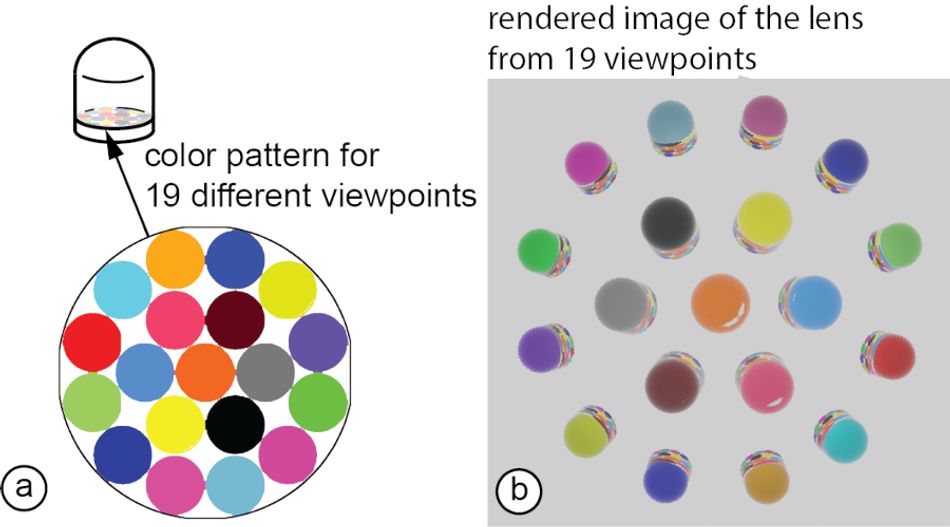 3D modeling software developed at MIT is capable of designing lenticular lenses good for an impressive 19 unique viewpoints, but the limitations of 3D printing technology mean fewer are possible in reality.

Using an off-the-shelf multi-material 3D printer, the team set about creating lenticular lenses which could be printed alongside the rest of the object — requiring only a little post-processing, in the form of the application of varnish or oil, to increase their light transmission. That, however, was only half the problem solved: The other half was figuring out where the lenses needed to go, and what should be underneath them to produce the desired effect.

For this the team developed custom software designed as a plug-in for the Rhino3D modeling tool. Using the plugin, a designer can import the 3D model of any object, add a lens layer, and apply textures with the colors to be seen from each of the possible viewpoints — up to 19 in theory, the team found through computer modeling, though that number is presently unachievable on commercial 3D printing hardware. 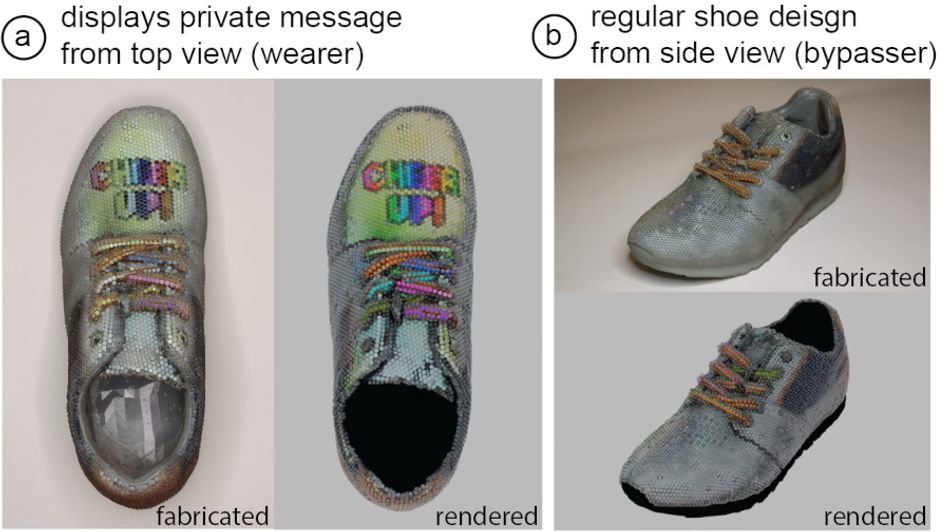 The team's software calculates the lens layer and the underlying textures ready for printing; a ray-traced render is shown for each viewpoint for confirmation.

Using ray-tracing technology, the software simulates the way light travels through the lenses from each of the possible viewpoints in order to allow the object designer to confirm the texture that will be shown. Once confirmed, the data is sent to the printer — and the whole object, including the lenses, is printed in a single pass.

Lenticular prints are often considered novelties, but the MIT team believes there’s a lot more to the technology than at first glimpse. To prove it, the software was used to generate a series of functional objects — the most functional of which is a kettlebell weight, fitted with a lenticular shell designed and printed using the custom plugin.

When the user lifts the kettlebell to the correct exercise position, they’ll see a checkmark; fail to lift the kettlebell high enough and they’ll see an arrow pointing upwards, providing feedback as to the mistake and how to correct it. If the kettlebell is lifted too high, meanwhile, the symbol shifts into a downward arrow — and all entirely passively, with no active electronics or sensing devices to be found. 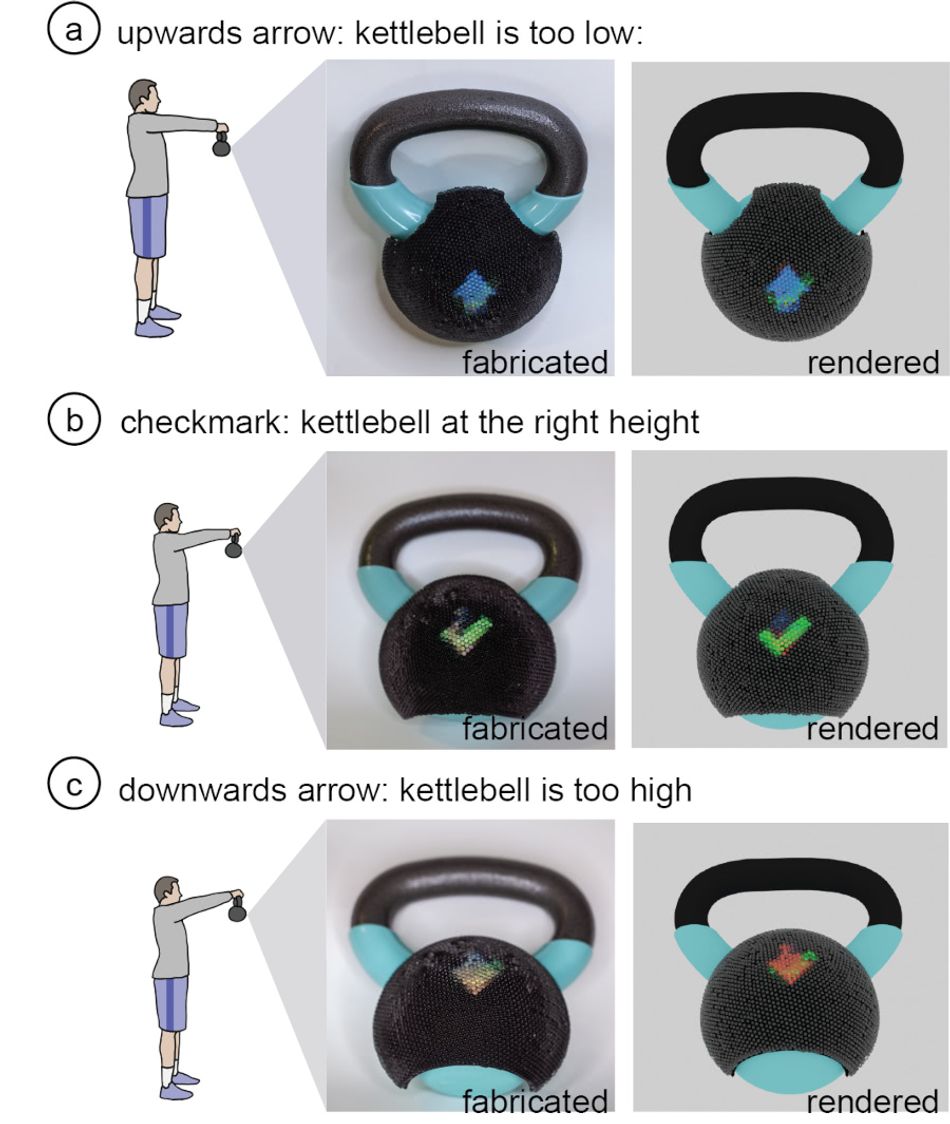 Although frequently associated with art and entertainment, lenticular lenses can create functional objects — like this form-checking kettlebell.

Other demonstrations put together by the team include: A lampshade which reads “Good Night” when the user is lying in bed and “Good Day” when they are sitting up; an earpod case which shifts through a series of five striped patterns at different angles, as an aesthetic implementation; and a pair of shoes which appear plain to observers but show a colorful “Cheer Up” message to the wearer.

A final demonstration serves as an experiment in switching to cylindrical lens shapes, which are just as compatible with 3D printing as the traditional round lenses used for the other objects. Offering higher spatial resolution with the limitation of only shifting along a single axis, the cylindrical lenses were used to create a container which reveals its contents only when held to eye-level. 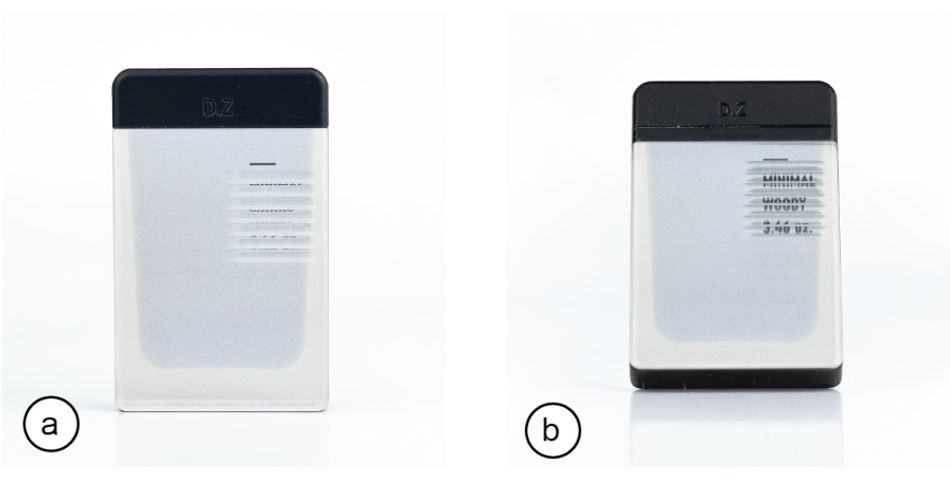 While the team's software currently focuses on round lenses, cylindrical lenses — which offer a higher resolution — are also possible.

While admitting to limitations in the work’s current state — including the ability for the designer to accidentally create invalid viewing angles, the application of lenses on top of rather than within object geometry adding 3mm (around 0.12") of thickness to the target surface, the lenses altering the surface texture and haptics of an object — the team has shown a solid basis for future work, which is to include enhancements to the software and experimentation with dynamic lens sizing.

The team’s work has been published in the Proceedings of the 34th Annual ACM Symposium on User Interface Software and Technology (UIST '21) under open-access terms.

Drying your FDM filaments, and keeping them dry: An overview

If you are printing with engineering-grade FFF materials, it is very likely that you need to dry your filaments before using them. This article will give an overview of your filament drying options, as well as their advantages, and their drawbacks!