In this article, CEO Jorgen Pedersen discusses how supervised autonomy can allow robots to perform duties that are otherwise hazardous to humans, while still giving the robot operators full control over specific tasks.

Discussions surrounding the latest robotic technology tend to focus primarily on the prospect of creating fully autonomous robots. Despite significant advancements in artificial intelligence and machine learning, autonomous robots are still not quite ready to handle the “edge cases” that the world presents—particularly in unstructured and unpredictable environments like the outdoors.

Keeping humans in the loop is critical to any successful robotics implementation. Despite what science fiction movies portray, humans are still very much needed for decision-making, error handling and error recovery in unstructured environments. This is especially true among applications that rely heavily on human intellect or physical capabilities, such as those in the health care, aerospace, or energy industries.

As the robots of today move beyond the factory floor and into the outside world, the spectrum of robotic technology has expanded. On one end of the spectrum, teleoperation has made it possible for operators to be in complete control while controlling robots from a safe distance. With teleoperation, a person is responsible for 100 percent of the decision-making and the direct actions of the robot through the use of a remote controller.

On the other end of the spectrum, there are fully autonomous robots, which keep humans completely out of the loop. Fully autonomous robots are responsible for all decision-making and actions, as well as all error handling and recovery. They must adapt to varying environments and recover from errors entirely on their own. Even though popular culture wants us to believe that AI-driven robots are now primed to take over all of humanity, it will be a long time—perhaps several decades—before we see fully autonomous, outdoor mobile robotic systems, simply because robots cannot yet fully think, act or respond to adaptions on their own, especially in unstructured or changing environments. 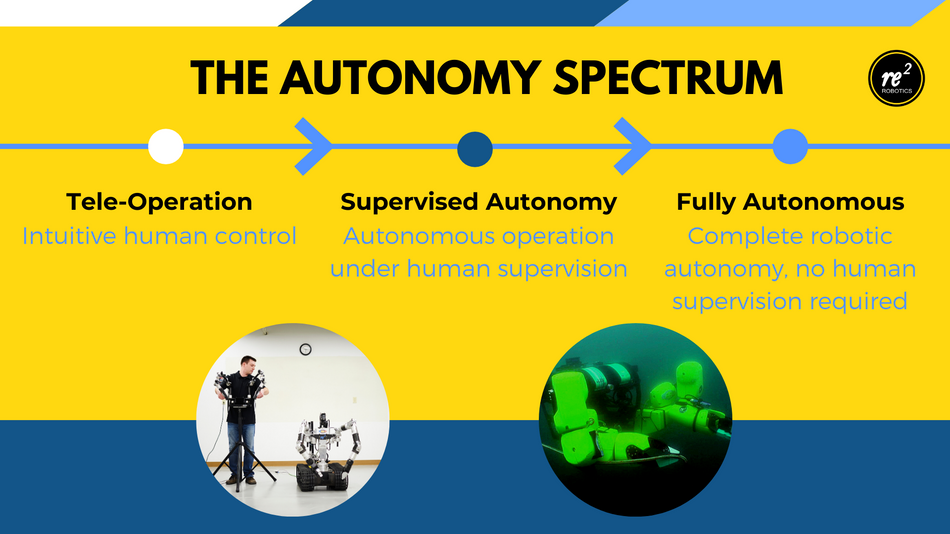 In between these two extremes — and readily available for implementation today — is “supervised autonomy.” This type of autonomy has two distinct levels: in the first level, a person is making the decisions and the robot is responsible for the direct action. In the second level, the robot is responsible for the high-level decision-making and the direct actions, and operator remains in the loop solely for error handling and recovery.

Supervised autonomy can allow robots to perform duties that are otherwise hazardous to humans, while still giving the robot operators to full control over specific tasks. This technology also can serve as a force multiplier when there are labor shortages. In addition, because this technology transfers physically demanding tasks to the robot, older workers can stay on the job longer while using their expertise to optimize control of the robots.

Unlike full autonomy, supervised autonomy is ready now for environments that are both controlled (not open to the public) and populated only by trained personnel.

For instance, industries such as aviation, construction, energy, and oil and gas, which all share common requirements for trained personnel, controlled environments, resilience to external factors, and the cognitive ability to learn and adapt, can especially benefit from supervised autonomy.

Although this technology has the potential to benefit many industries, the energy industry could find it particularly useful. The maintenance of high-voltage power lines is, without a doubt, one of the most hazardous manual labor jobs across any industry. Using robots to conduct dangerous inspection or repair tasks could protect workers from serious or even fatal injuries from falls, burns and electrocutions. At first, robots could be teleoperated by experienced operators. Once the system has learned from the experiences and data collected during teleoperation tasks, it could transition to a supervised autonomous system. Since workers would only be involved in a supervisory capacity to assist with error handling and recovery, they would be kept completely out of harm’s way.

Overall, the time is right for businesses to consider using supervised robotic autonomy to augment their staff and operations. Whether on the factory floor, in the operating room, or 40 feet in the air on a power line, supervised autonomy can help to keep workers out of harm’s way while improving productivity.

Author Bio:  Jorgen Pedersen, President and CEO, founded RE2 Robotics in July of 2001. Jorgen has contributed to the growth of the unmanned systems market for the past 20 years, beginning his career at Carnegie Mellon's National Robotics Engineering Center (NREC). Jorgen has held several leadership positions within the Robotics industry. He served as the Chairman of the Robotics Division of the National Defense Industrial Association (NDIA). Jorgen has also served in key roles such as a member of the Board of Trustees for NDIA and the Board of Directors for the National Advanced Mobility Consortium. Jorgen is the 2016 Carnegie Science Start-up Entrepreneur of the Year recipient. Jorgen was presented with the 2008 Army SBIR Achievement Award for the development of the Small Robot Toolkit for unmanned ground vehicles and the 2011 Tibbetts Award for SBIR Excellence. Jorgen holds a M.S. degree in Robotics and a B.S. degree in Electrical and Computer Engineering from Carnegie Mellon University. Connect with Jorgen on LinkedIn & Twitter.

More by RE2 Robotics

RE2 to Develop Underwater Autonomous System for the U.S. Navy

RE2 to Create Autonomous Helicopter Refueling System for the U.S. Army

How Plainsight created a no-code ML platform on Google Cloud

A team of MIT researchers is making it easier for novices to get their feet wet with artificial intelligence, while also helping experts advance the field.

Researchers have developed a tool that flags potential biases in sets of images used to train AI systems. The work is part of a larger effort to remedy and prevent the biases that have crept into AI systems that influence everything from credit services to courtroom sentencing programs.