The word 'farming' usually brings to mind the image of a shabbily dressed man plowing the fields using a classic tractor and sweating it out under the hot sun. However, that picture is not entirely in tune with the current version of reality. Agriculture has become high-tech today with various mechanical and automation tools, including robots, thus making farming sophisticated and comfortable by leveraging AI-ML (Artificial Intelligence- Machine Learning), IoT devices, etc.

Automation is the name of the game

The time-tested solution to overcome manual labor is automation. Automation is already present in farming with machines like tractors, harvesters, weeders, and even irrigation appliances. However, that will not suffice to cater to the growing demand for labor in the agricultural sector. Hence, agriculture robots must be designed, keeping the following aspects in mind:

The situation is perfectly ripe for the entry of agriculture robots to usher the community into the world of digital farming. While designing future agri-robots, the architects and designers must consider emerging technologies along with the aspects mentioned above, such as:

Benefits are endless: Where can agricultural robots help?

Farming consists of various repetitive and tedious tasks that take their toll on the farmers. Agricultural robots can automate such jobs with the mechanical robotic arms incorporating specialized manipulators, grippers, and effectors, thereby allowing farmers to focus on improving their overall yields. Here are some examples of how farming robots can help in making it easy for the agriculturist.

Planting And Sowing Seeds: The automatic seed-sowing robot is one of the simplest examples of robots in agriculture. This device can reduce the time and labor required for the farmer to sow seeds. 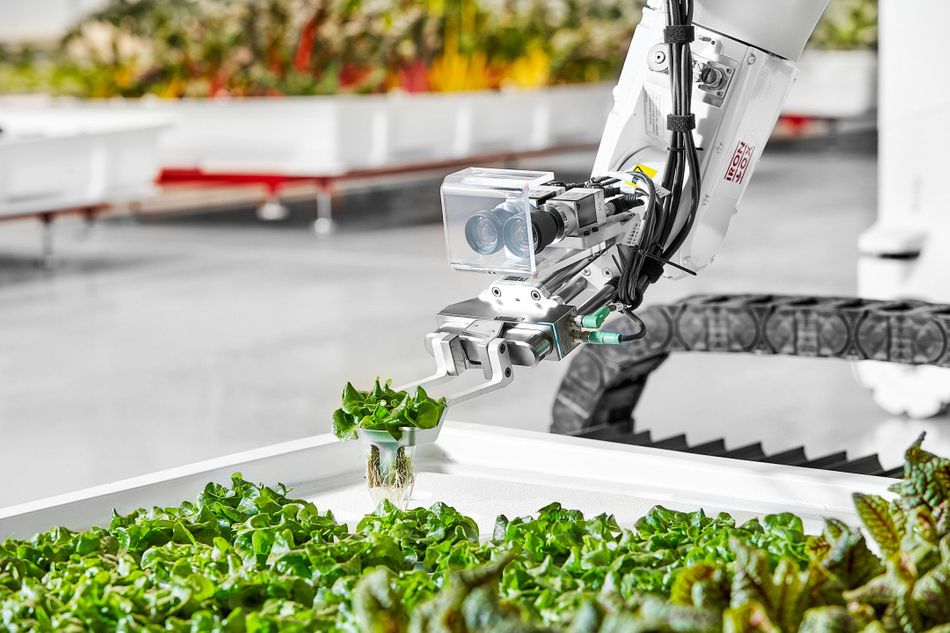 Here are 20 examples of popular agricultural robots that carry out various functions related to farming.

Tertill, a 4-wheeled robot, removes weeds independently using a nylon string under it. It is suitable for home gardens and small farms. It has a solar panel incorporated and only weighs 1.1 kg. 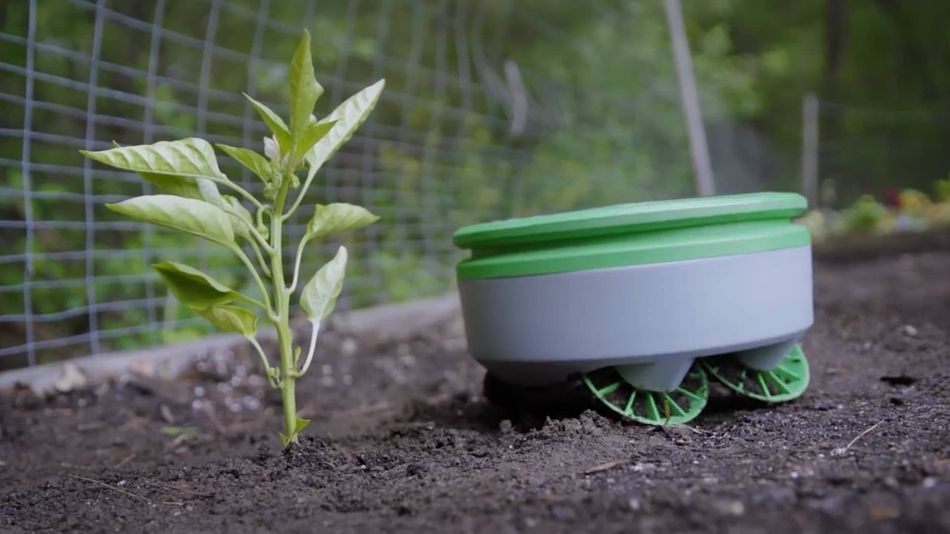 The Rubion model robot from Octinion identifies and plucks ripe strawberries without bruising them. It also weighs and places them safely in the punnet. 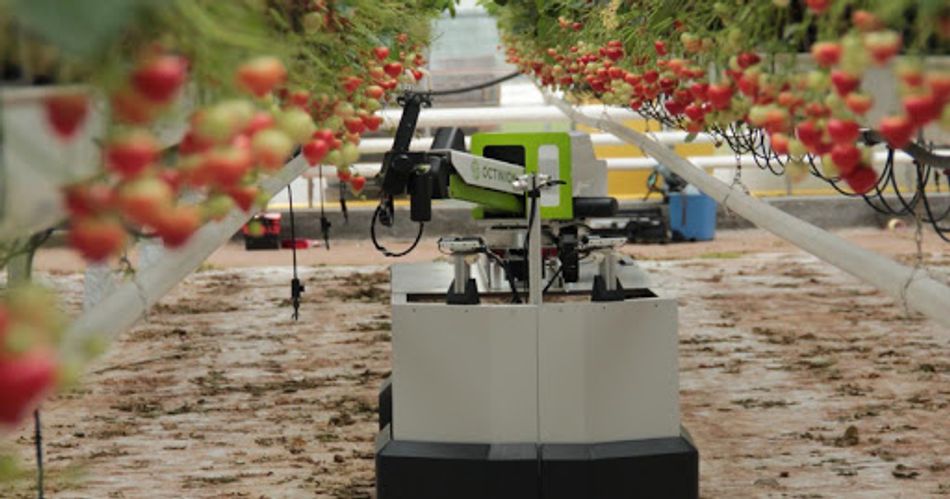 SmartCore helps in collecting soil samples intelligently for analysis. It makes sure to collect them from the same point every season to analyze the field’s evolution accurately. 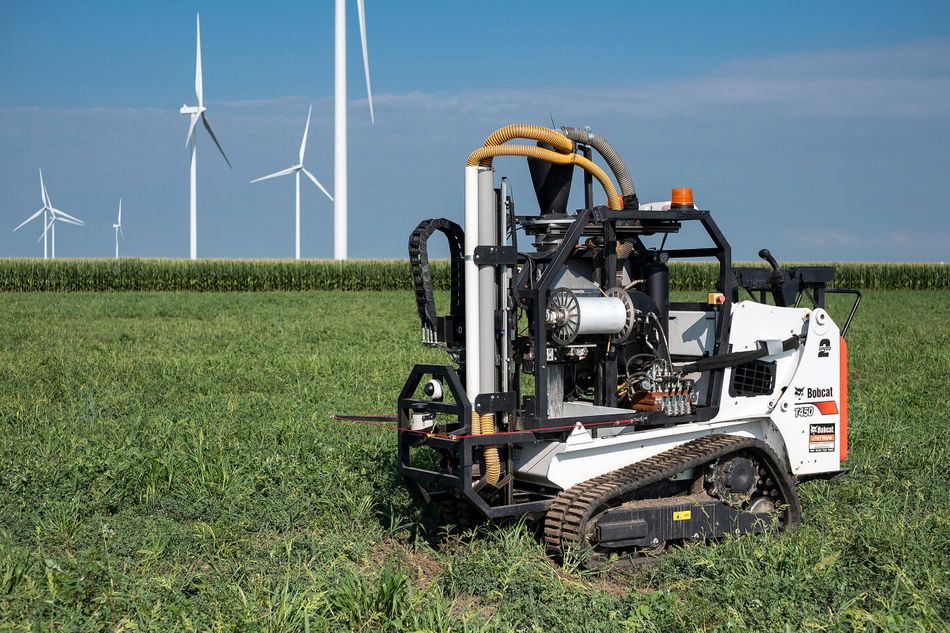 Fendt’s robots work in swarms across the field to plant seeds. It uses satellite-based navigation to accomplish the task. 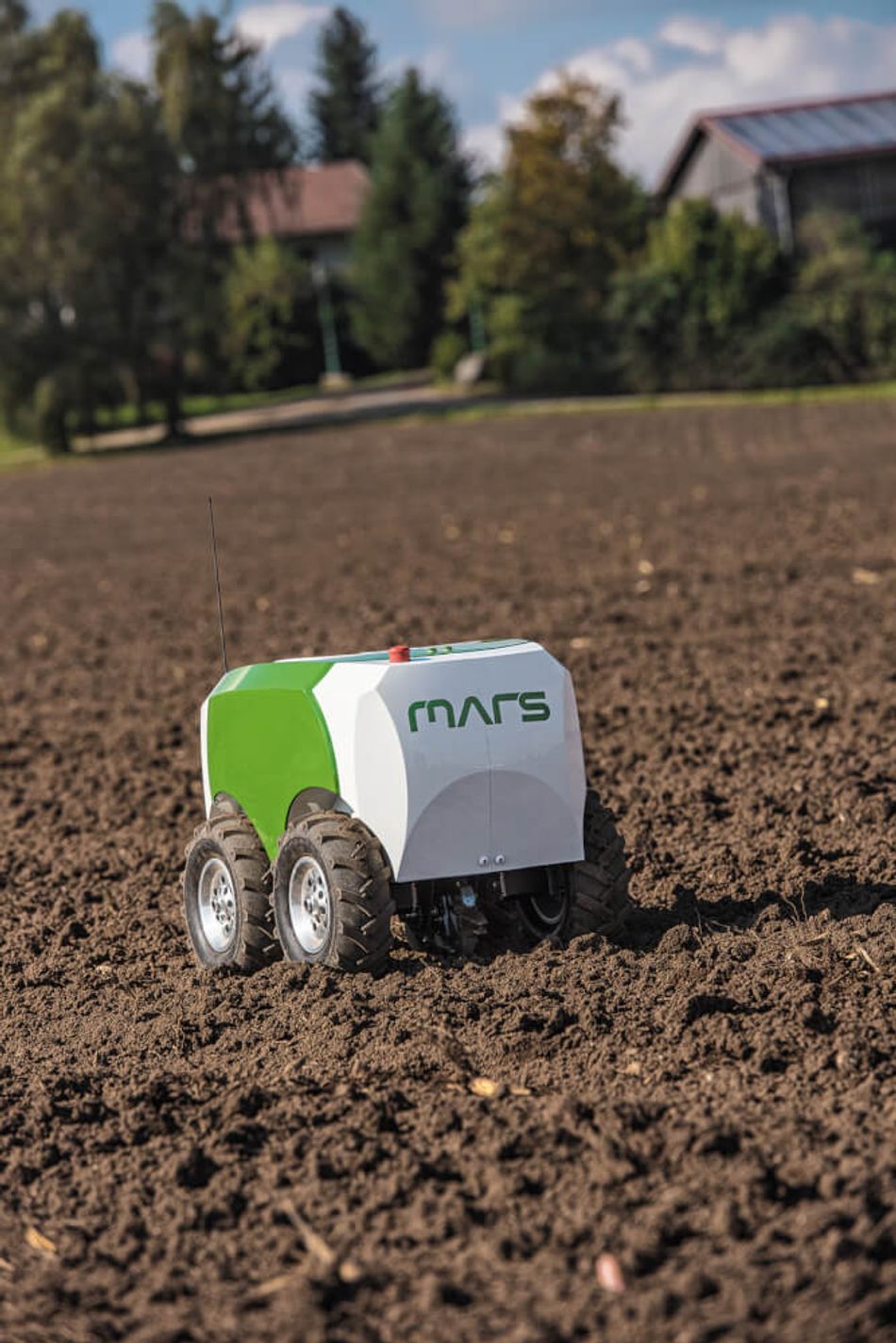 Dino from Naio Technologies works autonomously using the GPS guidance system for weeding large fields. It can work on predefined schedules like weeding every week. 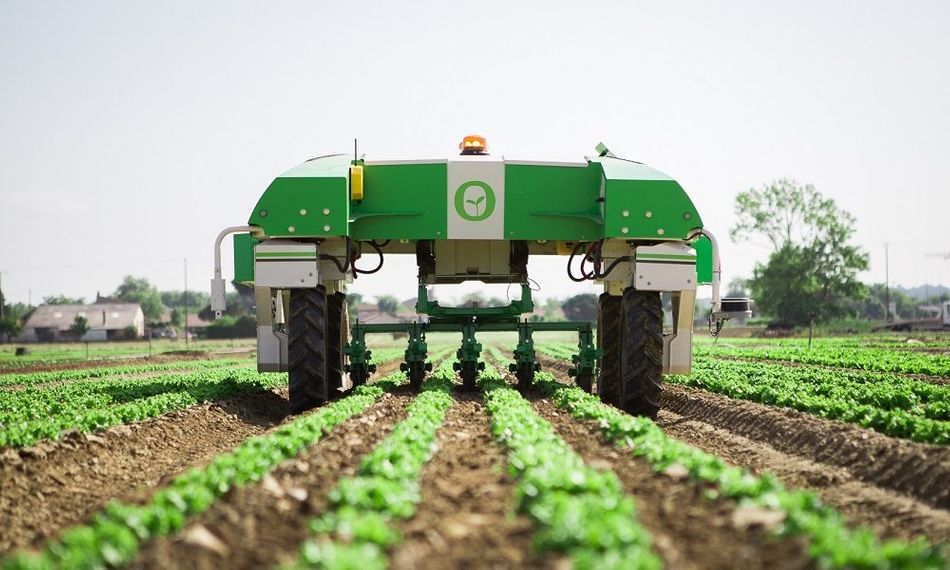 The SwagBot robot from Agerris will work based on AI software control and can weed, monitor crops, and even watch cattle, eliminating watch dogs. 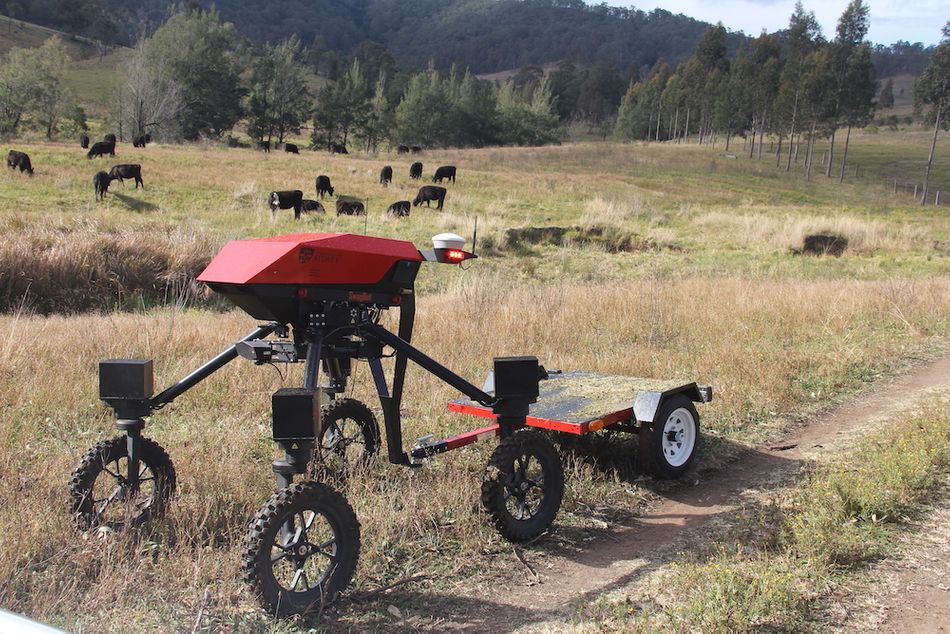 Mamut uses sophisticated technologies like an AI system, compass, and six 360 degree cameras for its work. It roams the field and captures images, helping to identify diseased crops.

FarmWise is a versatile robot used for weeding and adapts to different environments. It works with an AI-controlled mechanism and Deep-learning algorithms. 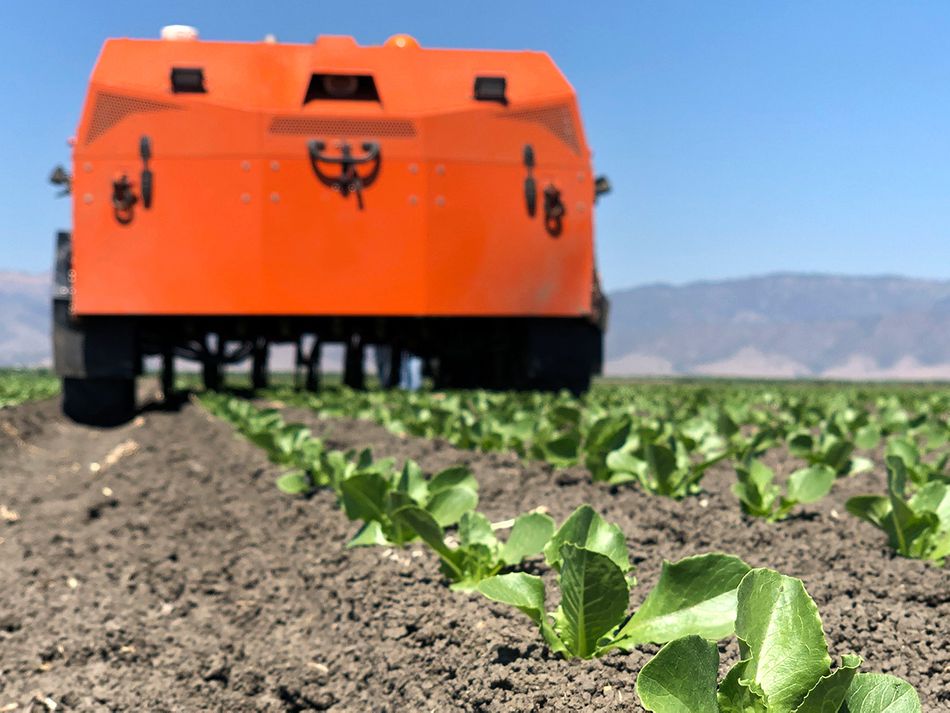 Ecorobotixs is a scan-and-spray robot targeting its enemy accurately with the help of a camera system and AI-control. It sprays 20 times less pesticide than traditional spraying methods.

Thorvald is envisaged as a versatile robot performing many functions and replaces human labor to a significant extent. It navigates the field without damaging plants and can even carry loads. 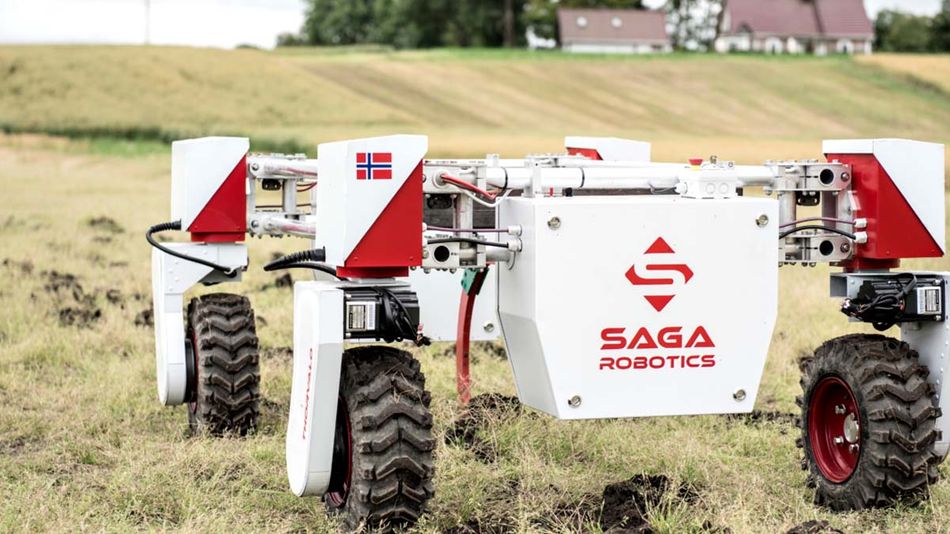 Energid is a harvesting robot mostly helping in picking citrus fruits. It can pluck one fruit in 2-3 seconds, and the overall cost is cheaper than human labor. 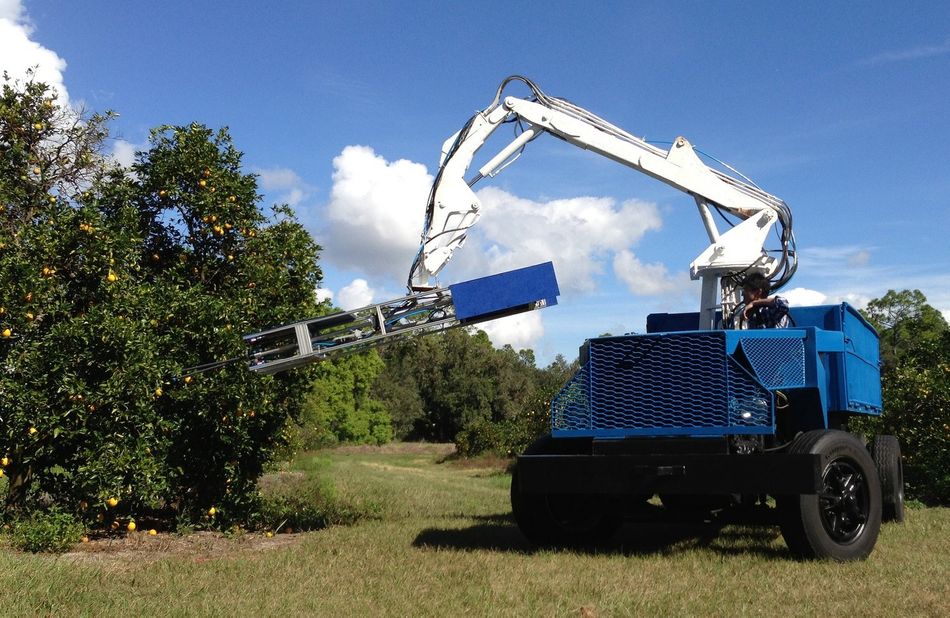 The E-Series is another harvesting robot with an AI system and 24 robotic arms. It not only picks strawberries but can also identify the ripe ones accurately.

The LettuceBot2 robot from Blue River helps farmers in thinning out the lettuce fields. It attaches to a tractor to do its work. 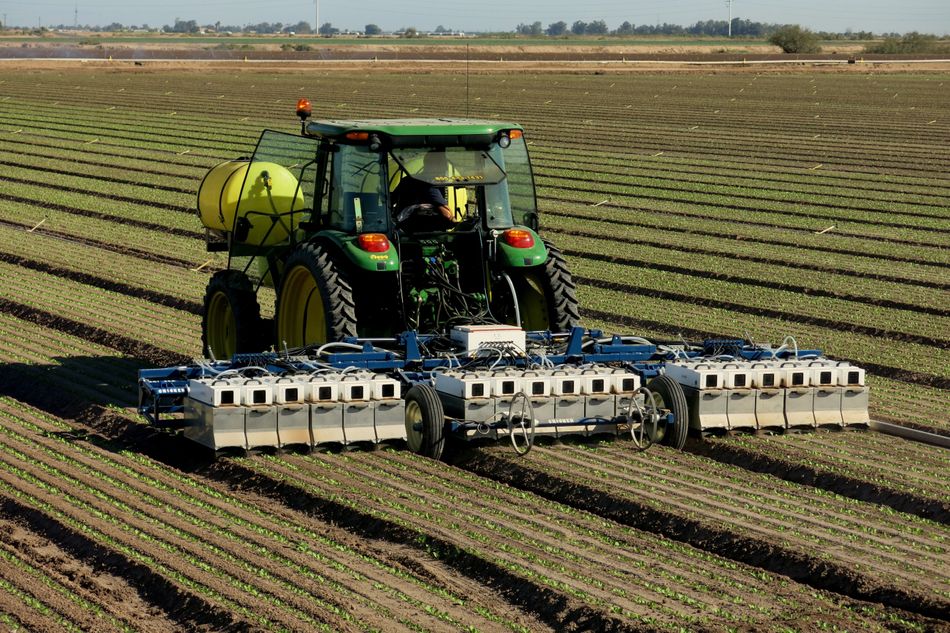 Agribotix by AgEagle Aerial Systems is a drone robot that helps monitor the crops and even measures their health. It captures aerial photos and records videos and also has an infrared sensor system. 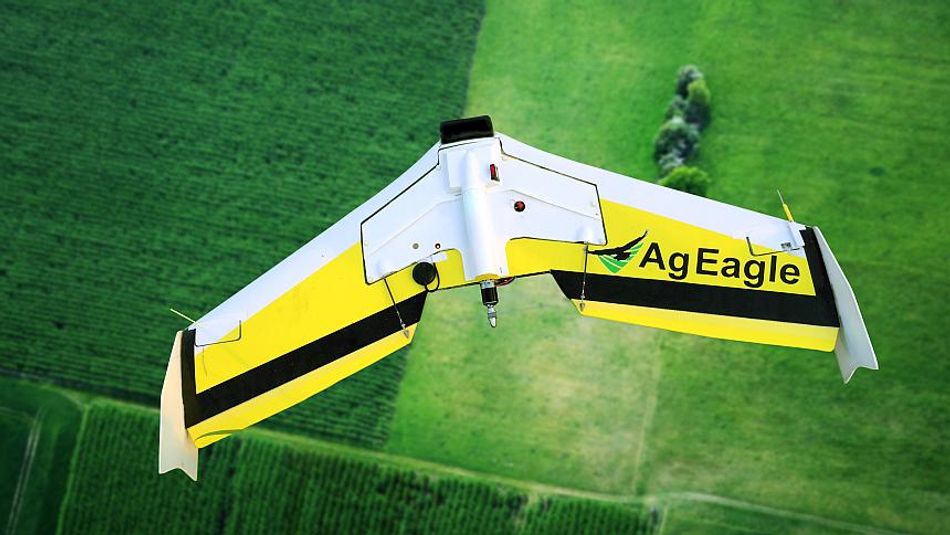 The Vision Robotics range of robots can automatically thin plants, especially lettuce, and prune vineyards. It is sophisticated with its AI-powered mechanisms. 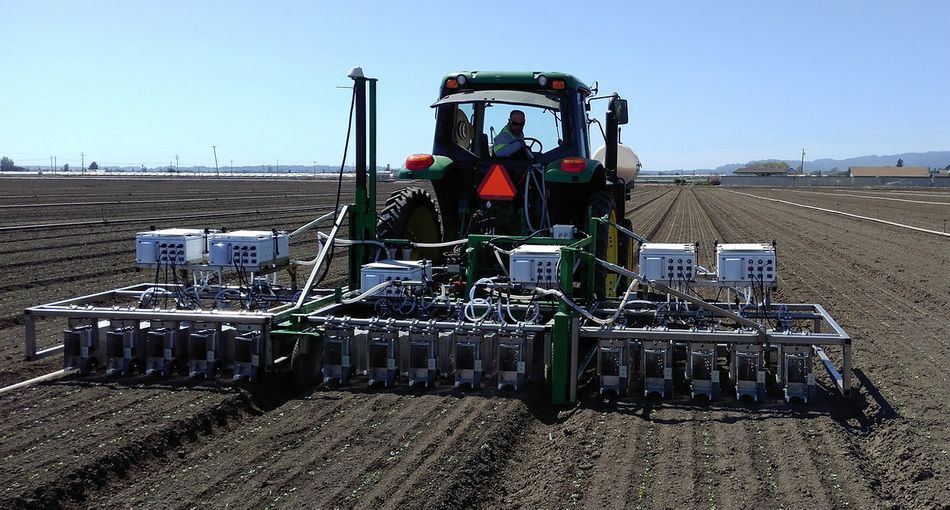 RoBoPlant helps in planting seeds using its semi-automatic and fully automatic modes. It finds optimal patterns for planting and is suitable for greenhouse management.

PrecisionHawk is a versatile drone robot that can help farmers with many sophisticated functions. It leverages multispectral, hyperspectral, and LiDAR technologies to perform tasks.

Harvest CROO is a harvesting robot with sophisticated parts for grabbing the leaves, picking the strawberries, and packing them. It can distinguish between ripe and unripe fruits. 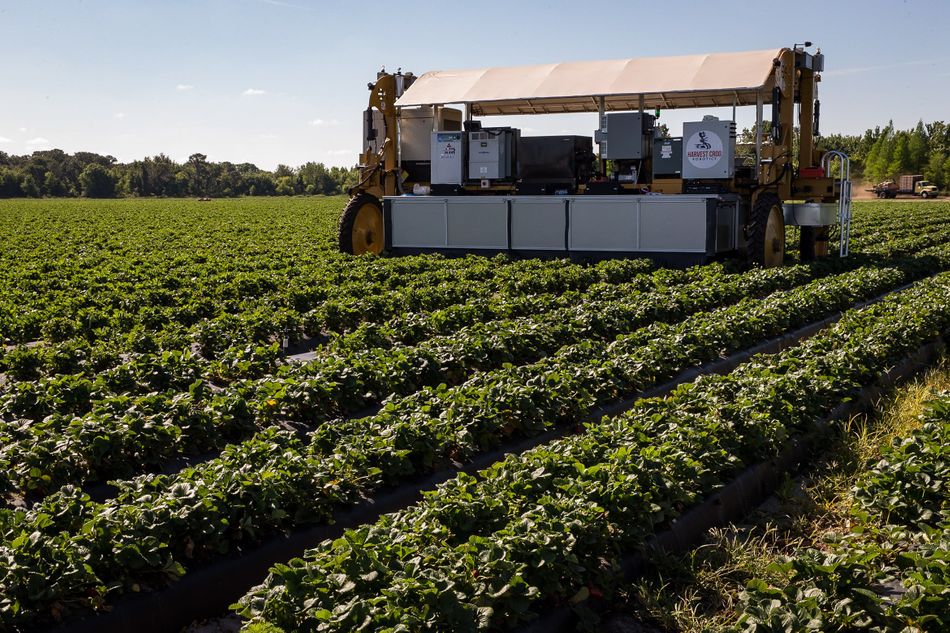 Abundant is an advanced apple-harvesting robotic brand. It can identify the ripe ones, pluck them, and then store them. It works based on a vacuum-control mechanism and uses advanced algorithms. 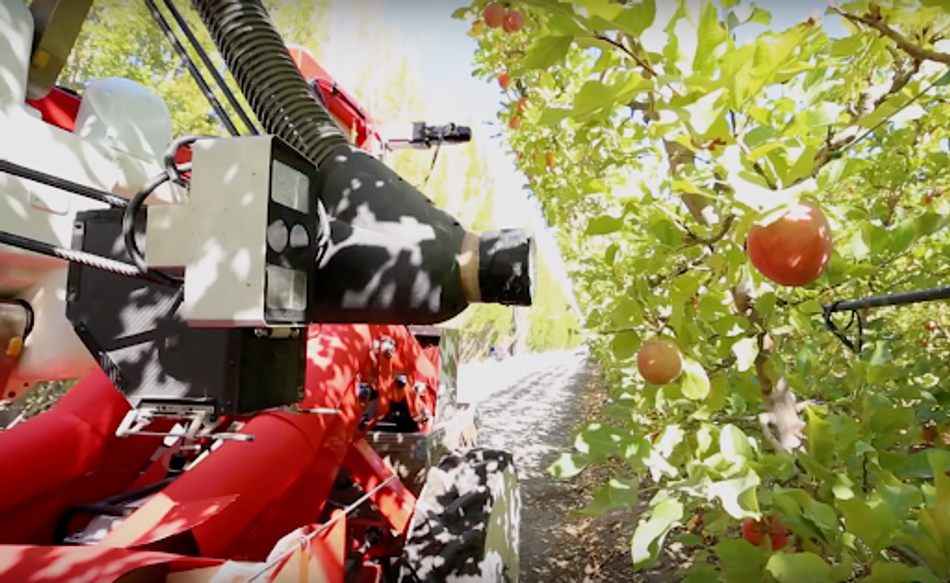 The award-winning R2Weed2 robot from Nexus intelligently distinguishes between weeds and crops and removes weeds efficiently. It performs environmental monitoring and soil analysis alongside too. 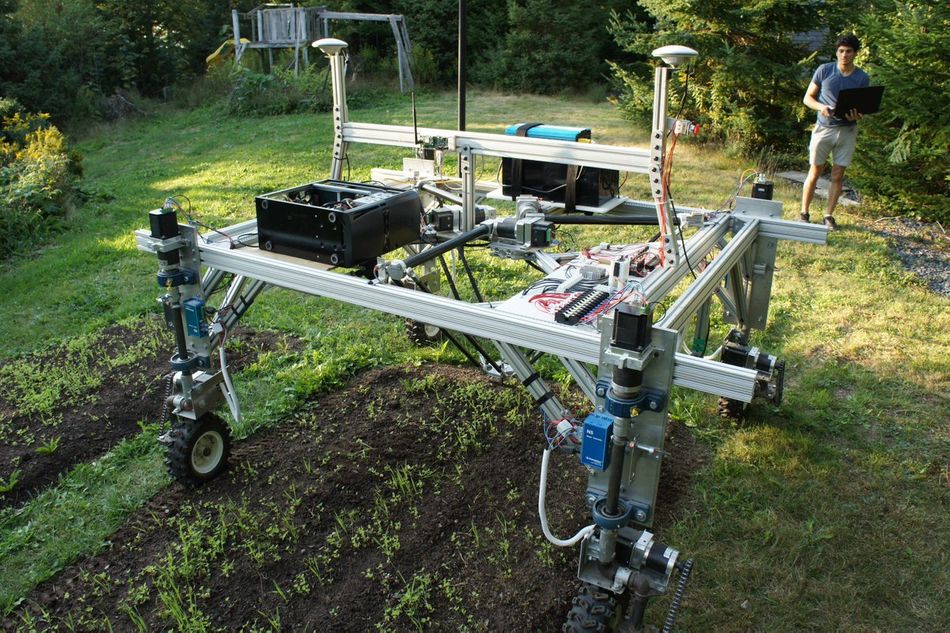 What are some of the key benefits of agricultural robots?

Besides making work a lot easier for the farmers, here are some ways robots can prove to be advantageous in agriculture:

Fewer Errors – Compared to humans, robots can be programmed to make fewer errors. Besides, robots can eliminate work that can be dangerous to humans.

Just as farming robots are advantageous, they come with distinct disadvantages, as well. Robots are specialized machinery. Hence, they are costly to acquire and, being machines, require a great deal of care to keep them functioning. The Agri-robots need a great deal of research and development to be continuously improved and updated. It involves massive R&D investments and also not easily accessible for the small and marginal farmers. On the other hand, conventionally, farming has been a manual activity over the years, and getting used to agricultural robots will be a cultural and emotional change.

All in all, robots have proved to be handy in the industrial sector as they speed up operations and save human labor. Hence, they have tremendous scope in an industry with the maximum human activity, i.e., agriculture. Robots in agriculture can reduce the dependency on human labor to a significant extent. And they improve the overall efficiency levels considerably with holistic farming approaches by leveraging emerging technologies like AI and ML.

It spanned over 120 feet and took up a considerable area inside the already overpacked robotics section of the Las Vegas Convention Center, leaving many to wonder, ‘What on earth is a tractor doing at CES?’

This paper is about fast slosh-free fluid transportation. Existing approaches are either computationally heavy or only suitable for specific robots and container shapes.