Written micro- and nano-periodic structures inside a glass. Photo courtesy of the researchers

Researchers from ITMO’s Faculty of Nanoelectronics together with their colleagues from the Lebedev Physical Institute, D. Mendeleev University of Chemical Technology of Russia, and the National Research Nuclear University MEPhI have conducted a study that showed that nanolattices possess high spectral selectivity. Their layers can be used as color filters for specific wavelength ranges, and one glass plate can contain records of up to six layers. Using this technology, the scientists were able to implement dispersive birefringent filters, which have multiple applications. For instance, they can be used to create AR/VR color displays or novel biochemical sensors for bacterial analysis.

For two years, the researchers have been modeling, designing, and testing a wide range of integral optical elements to build a waveguide holographic periscope, an essential part of next-gen AR/VR glasses. Current headsets tend to limit a user’s field of view, while smart glasses can complement the virtual space and inform users about surrounding objects and environment.

In order to create such a device, scientists have to address a number of issues associated with its creation: for instance, to figure out how to transmit a color image via glasses. For that to happen, the researchers have improved a laser-initiated microplasma (LIMP) glass-processing method that allows them to create laser beam converters for the application of submicron periodic structures. After that, the team applied laser writing to obtain bulk periodic structures inside a glass with modified refractive index. Their next step was to create submicron diffraction gratings on a single glass plate, which will input and output AR/VR images via diffracted orders.

Writing of integrated elements inside a glass. Video courtesy of the researchers

“We aim to develop the basics of using laser writing of integrated elements in photonic materials. Current sets of optical components (a mirror, a light source, filters, converters, etc,) are so massive that they occupy the entire optical table. We, in turn, want to create compact optical integrated circuits that can fit in the palm of a user, also called chip-scale devices. For instance, we record light-transmitting and selectively reflective elements on a glass matrix at several levels in 3D. Such a technology is compact and protected from external threats” comments Roman Zakoldaev, a researcher at ITMO’s Faculty of Nanoelectronics and an author of the paper.

The research involved several teams. The first team was in charge of direct laser writing in optical materials, the second one measured the morphological and physical properties of the produced micro- and nanostructures, and the third worked on the theoretical modeling of physical and optical processes.

The first stage of the study included an investigation of direct laser writing of wide-ranging optical materials, such as quartz, multicomponent and nanoporous glasses, and calcium fluoride. The researchers made use of both materials already used in production and the promising ones. Among the latter are nanoporous matrices, which are developed and used by ITMO scientists. These media are used in laser writing because they help increase the efficiency of phase incursion within a periodic bulk structure with submicron periods. 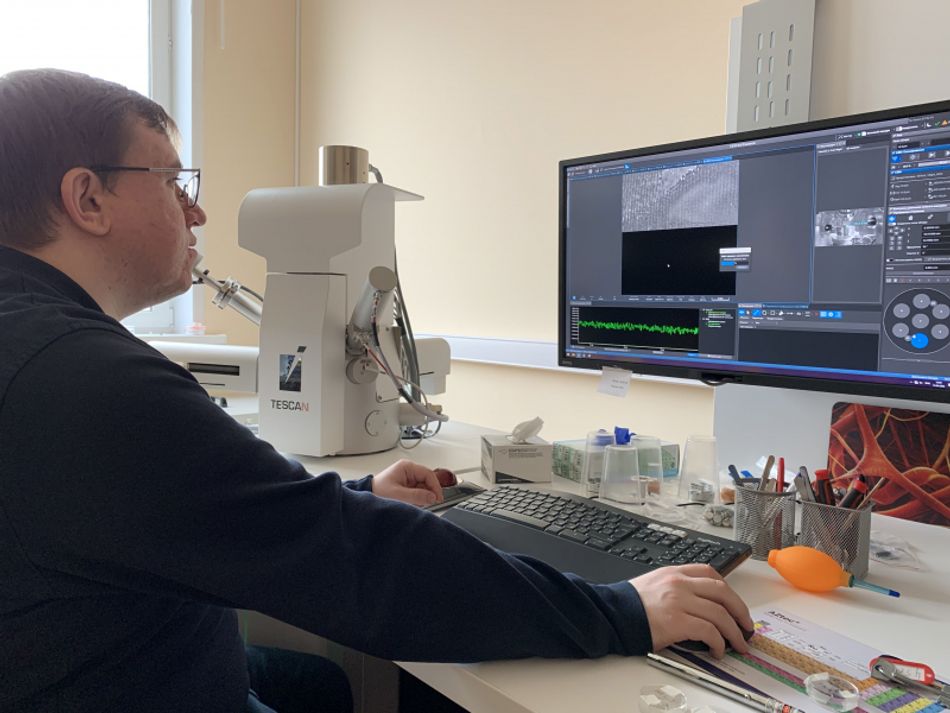 Alexey Rupasov studies the morphology of nanolattices with a period of 390 nm for further modeling. Photo courtesy of the researchers

Then, the researchers tested different laser writing modes in quartz glass. By experimenting with the duration of femtosecond laser pulses, fluence, and the wavelength of laser radiation, they learned that such characteristics as phase incursion and light scattering affect a spectral range of the resulting filters. In other words, the scientists discovered laser writing modes, which allowed them to obtain structures with the highest phase incursion and the lowest light scattering.

For both physics and biochemistry

As a result, the researchers were able to identify a relationship between phase incursion and the modes of laser writing in quartz glass. Phase incursion is a change of the refractive index in quartz glass due to the formation of periodic structures with various refractive indices (glass-air). These zones display a relatively high phase incursion (up to 166 degrees) per layer, which makes it close to a half-wave plate. The discovered modes make it possible to implement any phase optical element inside a glass. Due to the high phase incursion, these structures get colorized with birefringence colors when placed between polarizers. 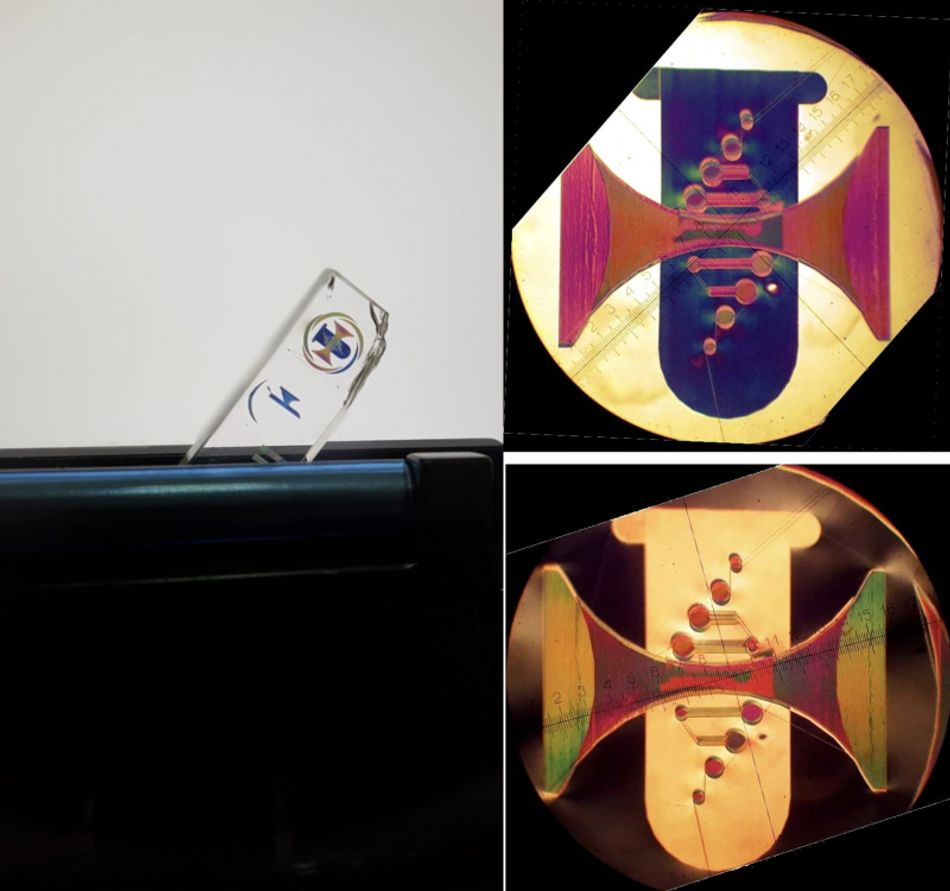 Birefringence regions inside quartz glass in crossed and parallel polarizers. Photo courtesy of the researchers

“Multilayer writing makes it possible to create dispersive birefringent filters in a given spectral range, which paves the way for future compact sensors that will be based on the principles of integrated optics and will include the spectral analysis function. While the modern market does have dispersive birefringent filters, they are still separate optical devices. And we are working our way to offer a single glass plate that will integrate all these filters in one plate. Since our study is fundamental, we prepared a model, which showed us that our technology can be used to record multilayer structures in the visible spectral range,” explains Alexey Rupasov, a researcher at ITMO’s Faculty of Nanoelectronics and an author of the research.

The results obtained provide a vital framework for radiation processing in AR devices, in which images are generated using three RGB coordinates. Diffraction gratings will help ensure input and output of radiation at various wavelengths. In the future, there might be a single glass plate with three types of periodic structures, which will adjust the radiation to RGB wavelengths and colorize the images. 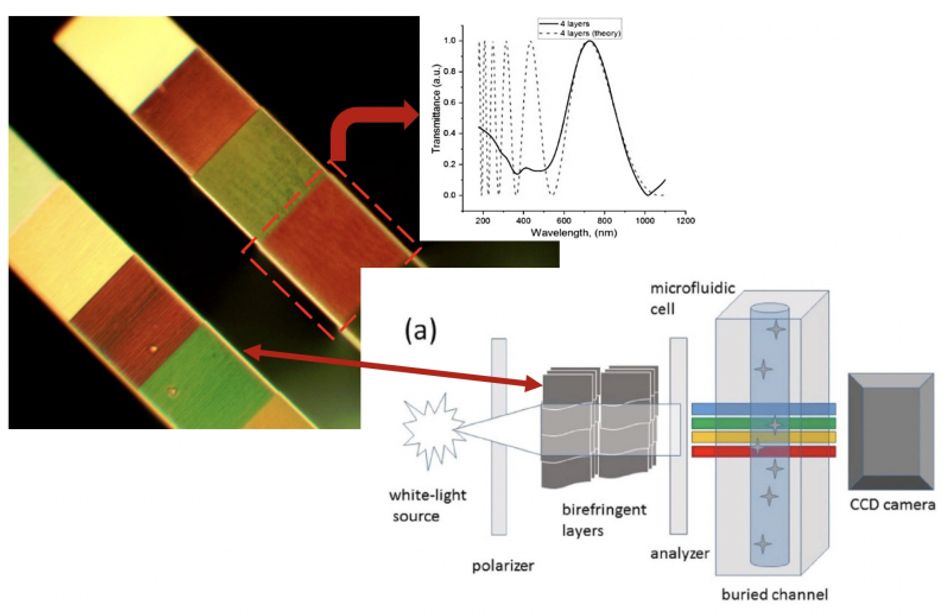 The image of dispersive filters, the cell transmission spectrum, and a layout of a diagnostic microfluidic chip. Illustrations from the article published in Laser Physics Letters

The team also proposed a concept and a design of an integrated biochemical sensor for bacterial analysis. The suggested idea can replace the existing dispersive birefringent filters, which can only analyze wavelengths separately, by offering an opportunity to conduct all studies using a single lab-on-a-chip – a glass surface exposed to polarized light. The technology will include an internal or an external microfluidic chip, within which there’ll be liquids with a detectable substance, such as bacteria. Each of these substances respond to a specific spectral range and a wavelength. On top of that, they can absorb light or fluoresce. The reactions show what is happening inside the chip.

Thanks to the enhanced light-field technology developed by EPFL spin-off Creal, augmented-reality and virtual-reality images appear increasingly life-like with less strain on users’ eyes. The company will present the latest version of its system at the Augmented World Expo this week in California.

EPFL startup CREAL has developed a new technology that brings real-life detail and depth to the virtual world. Its image projection system helps to avoid the nausea experienced by most users of existing technologies.