A group of researchers from ITMO University, the Australian National University, and the Friedrich Schiller University Jena (Germany) has for the first time demonstrated effective generation of higher harmonics in silicon metasurfaces. This result was achieved due to resonant states with long lifietimes. The new discovery brings closer the creation of attosecond radiation sources based on semiconductor nanostructures. Ultrashort pulse lasers which earned their pioneers the Nobel Prize in Physics in 2018 make it possible to excite and explore very rapid processes in nature and matter. This opens new horizons for understanding ultrafast physics and faster information recording.

High harmonics generation is a nonlinear optical process of photon interaction with nonlinear media that results in the generation of radiation with a frequency that is multiplied by a corresponding integer number (e.g., 5th harmonic generation = 5 times the frequency of the initial photon). For instance, during second-harmonic generation photons come together to form new photons with doubled energy and wave frequency but with a wavelength that is only half of the original one. The maximal known harmonic is over 100, meaning that in these cases radiation frequency is more than 100 times higher than excitation frequency.

One of the actively researched areas these days is higher harmonic generation in noble gasses. Subjecting such gasses to interaction with ultrapowerful and ultrashort pulse lasers made it possible to achieve an effective nonlinear transformation of pumping light into higher harmonics. These harmonics demonstrate an important property – the duration of radiation in them can be reduced down to attoseconds, which is a quintillion times shorter than a second and by orders of magnitude shorter than the pumping laser pulse.

Attosecond sources of radiation are used to detect ultraquick processes in various fields and materials. However, when such systems are based on rare gasses they require special conditions, namely, high vacuum and bulky gas tanks. That is why in this project the researchers tested the possibility of generating higher harmonics in solids, in particular, in resonant silicon nanostructures. These are metasurfaces that can support the so-called bound states in the continuum, meaning that they contain energy inside and do not emit it into their surroundings. These states can significantly increase nonlinear optical effects, including higher harmonic generation.

Part of the project was conducted at the Nonlinear Physics Center of the Australian National University by a group of researchers including Yuri Kivshar, Kirill Koshelev, and Sergey Kruk, experts in the field of nonlinear resonant all-dielectric nanophotonics. It turned out that by changing the configuration of metasurfaces (disturbing their surface symmetry), one can produce fascinating effects:

“We had a sample of optimized metasurfaces and we started by analyzing the process of harmonic generation (starting with the third and the fifth) in the laser system available in Australia. With the pulse of several picoseconds we couldn’t generate harmonics of a higher order than fifth, however we noticed that some metasurfaces could generate nonlinear radiation with an efficiency  by a factor of 100 higher than others. This effect could be achieved because of the optimized geometry of a metasurface – meaning the size of metaatoms and the period of their location in the nanostructure,” explains George Zograf, lead author of the article and junior researcher at ITMO’s Faculty of Physics.

Then, the researchers posited that higher-order harmonics could be generated with more powerful ultrashort pulse lasers with pulses of about 100 femtoseconds. This experiment was conducted on the optical setup with an ultrapowerful laser at the Friedrich Schiller University Jena in collaboration with the group headed by Prof. Christian Spielmann and Daniil Kartashov.

It turned out that a more powerful laser makes it possible to use the same silicon metasurfaces to generate higher harmonics up to the 11th order while at the same time eliminating the previously observed twofold difference between resonant and nonresonant metasurfaces. 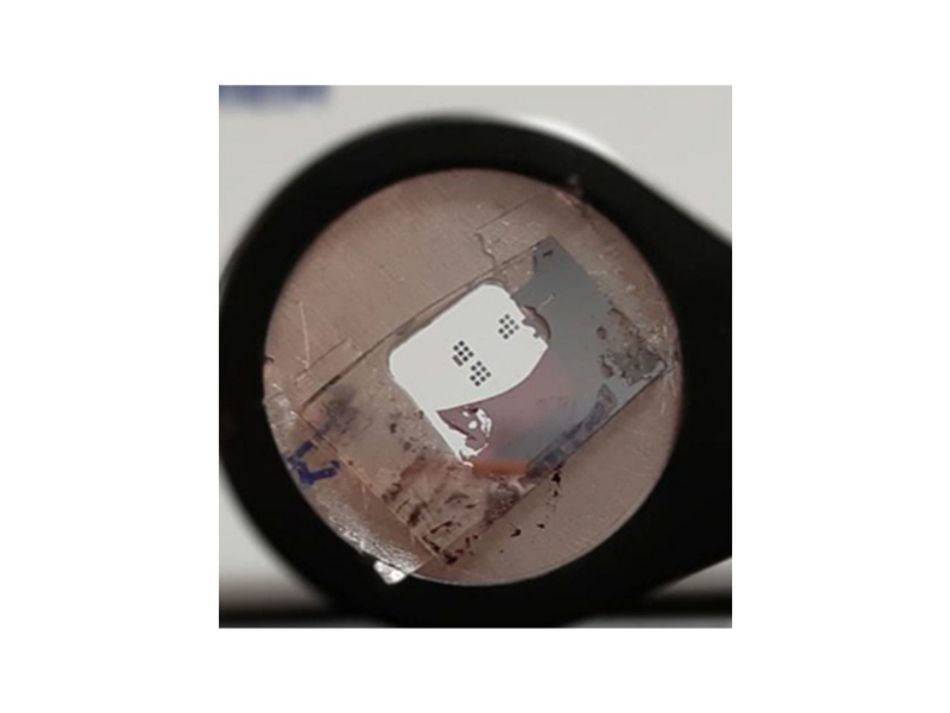 A 300*300 micrometers sample of the silicon metasurface. 3 sets of 8 metasurfaces were used in the experiment. Photo courtesy of the researchers

As a result, the researchers have arrived at a counterintuitive conclusion: the more powerful the laser and the shorter the pulse interacting with a nanostructure, the smaller the effect of its resonance nature and high-quality states. This phenomenon is connected to the fact that when a metasurface is subjected to radiation from an ultrapowerful ultrashort pulse laser, electron-hole plasma is generated inside of it. This means that free electrons appear in the metasurface and their absorption increases the heat thus significantly damaging its resonating properties while at the same time allowing for higher-order harmonic generation.

The main conclusion of this project is that while high-quality bound states in the continuum are crucial for linear effects, the material itself and not its structure is more important for ultrashort pulse and ultrapowerful systems. In order to allow for higher harmonic (and ultrashort pulse) generation, a material has to be highly crystalline and demonstrate a high damage threshold and low (or nonexistent) optical loss in the visible and infrared ranges of the spectrum.

Prof. Sergey Makarov from ITMO’s Faculty of Physics explained that in the future, the researchers are planning to develop more compact designs for efficient higher harmonic generation by employing new materials (such as 2D ones or perovskites) and new approaches to nanoresonator design.

Cornell researchers have developed nanostructures that enable record-breaking conversion of laser pulses into high-harmonic generation, paving the way for new scientific tools for high-resolution imaging and studying physical processes that occur at the scale of an attosecond

With this non-paint brush of over 20 colors and shades, artists may no longer need to be afraid of uneven lines or inadequate palettes. All missteps can be easily erased or repainted with no risk of ruining a picture.