When exposed to the sky, the porous polymer PDRC coating reflects sunlight and emits heat to attain significantly cooler temperatures than typical building materials or even the ambient air.

New York, NY—September 27, 2018—With temperatures rising and heat-waves disrupting lives around the world, cooling solutions are becoming ever more essential. This is a critical issue especially in developing countries, where summer heat can be extreme and is projected to intensify. But common cooling methods such as air conditioners are expensive, consume significant amounts of energy, require ready access to electricity, and often require coolants that deplete ozone or have a strong greenhouse effect.

An alternative to these energy-intensive cooling methods is passive daytime radiative cooling (PDRC), a phenomenon where a surface spontaneously cools by reflecting sunlight and radiating heat to the colder atmosphere. PDRC is most effective if a surface has a high solar reflectance (R) that minimizes solar heat gain, and a high, thermal emittance (Ɛ) that maximizes radiative heat loss to the sky. If R and Ɛ are sufficiently high, a net heat loss can occur, even under sunlight.

Developing practical PDRC designs has been challenging: many recent design proposals are complex or costly, and cannot be widely implemented or applied on rooftops and buildings, which have different shapes and textures. Up to now, white paints, which are inexpensive and easy to apply, have been the benchmark for PDRC. White paints, however, usually have pigments that absorb UV light, and do not reflect longer solar wavelengths very well, so their performance is only modest at best.

Researchers at Columbia Engineering have invented a high-performance exterior PDRC polymer coating with nano-to-microscale air voids that acts as a spontaneous air cooler and can be fabricated, dyed, and applied like paint on rooftops, buildings, water tanks, vehicles, even spacecraft—anything that can be painted. They used a solution-based phase-inversion technique that gives the polymer a porous foam-like structure. The air voids in the porous polymer scatter and reflect sunlight, due to the difference in the refractive index between the air voids and the surrounding polymer. The polymer turns white and thus avoids solar heating, while its intrinsic emittance causes it to efficiently lose heat to the sky. The study is published online today in Science.

Passive daytime radiative cooling (PDRC) involves simultaneously reflecting sunlight and radiating heat into the cold sky to achieve a net heat loss. The process, which is spontaneous, can cool down structures to sub-ambient temperatures.

The team—Yuan Yang, assistant professor of materials science and engineering; Nanfang Yu, associate professor of applied physics; and Jyotirmoy Mandal, lead author of the study and a doctoral student in Yang’s group (all department of applied physics and applied mathematics)—built upon earlier work that demonstrated that simple plastics and polymers, including acrylic, silicone, and PET, are excellent heat radiators and could be used for PDRC. The challenges were how to get these normally transparent polymers to reflect sunlight without using silver mirrors as reflectors and how to make them easily deployable.

They decided to use phase-inversion because it is a simple, solution-based method for making light-scattering air-voids in polymers. Polymers and solvents are already used in paints, and the Columbia Engineering method essentially replaces the pigments in white paint with air voids that reflect all wavelengths of sunlight, from UV to infrared.

“This simple but fundamental modification yields exceptional reflectance and emittance that equal or surpass those of state-of-the-art PDRC designs, but with a convenience that is almost paint-like,” says Mandal.

The researchers found their polymer coating’s high solar reflectance (R > 96%) and high thermal emittance (Ɛ ~ 97%) kept it significantly cooler than its environment under widely different skies, e.g. by 6˚C in the warm, arid desert in Arizona and 3˚C in the foggy, tropical environment of Bangladesh. “The fact that cooling is achieved in both desert and tropical climates, without any thermal protection or shielding, demonstrates the utility of our design wherever cooling is required,” Yang notes. 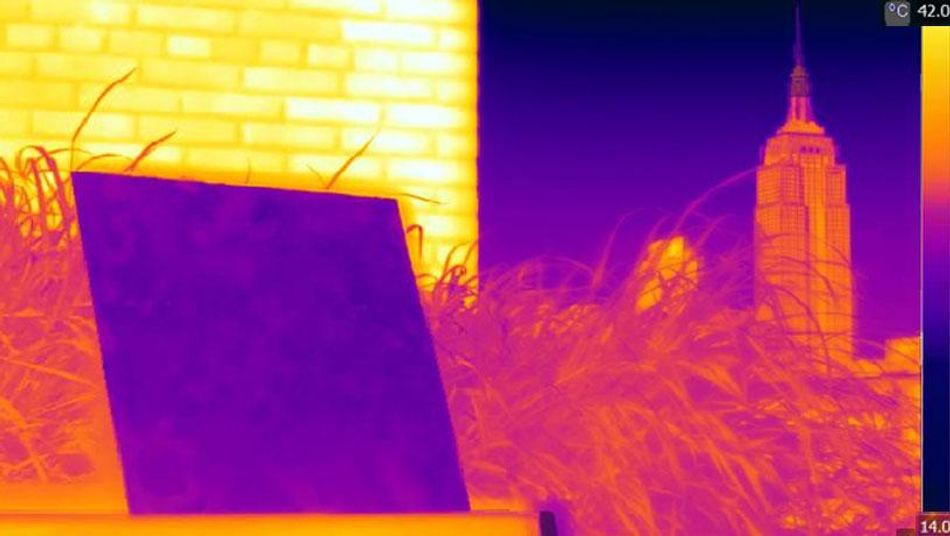 When exposed to the sky, the porous polymer PDRC coating reflects sunlight and emits heat to attain significantly cooler temperatures than typical building materials or even the ambient air.

The team also created colored polymer coatings with cooling capabilities by adding dyes. “Achieving a superior balance between color and cooling performance over current paints is one of the most important aspects of our work,” Yu notes. “For exterior coatings, the choice of color is often subjective, and paint manufacturers have been trying to make colored coatings, like those for roofs, for decades.”

The group took environmental and operational issues, such as recyclability, bio-compatibility, and high-temperature operability, into consideration, and showed that their technique can be generalized to a range of polymers to achieve these functionalities. “Polymers are an amazingly diverse class of materials, and because this technique is generic, additional desirable properties can be conveniently integrated into our PDRC coatings, if suitable polymers are available,” Mandal adds.

“Nature offers many ways for heating and cooling, some of which are extremely well known and widely studied and others that are poorly known. Radiative cooling—by using the sky as a heat sink—belongs to the latter group, and its potential has been strangely overlooked by materials scientists until a few years ago,” says Uppsala University Physics Professor Claes-Göran Granqvist, a pioneer in the field of radiative cooling, who was not involved with the study. “The publication by Mandal et al. highlights the importance of radiative cooling and represents an important breakthrough by demonstrating that hierarchically porous polymer coatings, which can be prepared cheaply and conveniently, give excellent cooling even in full sunlight.” 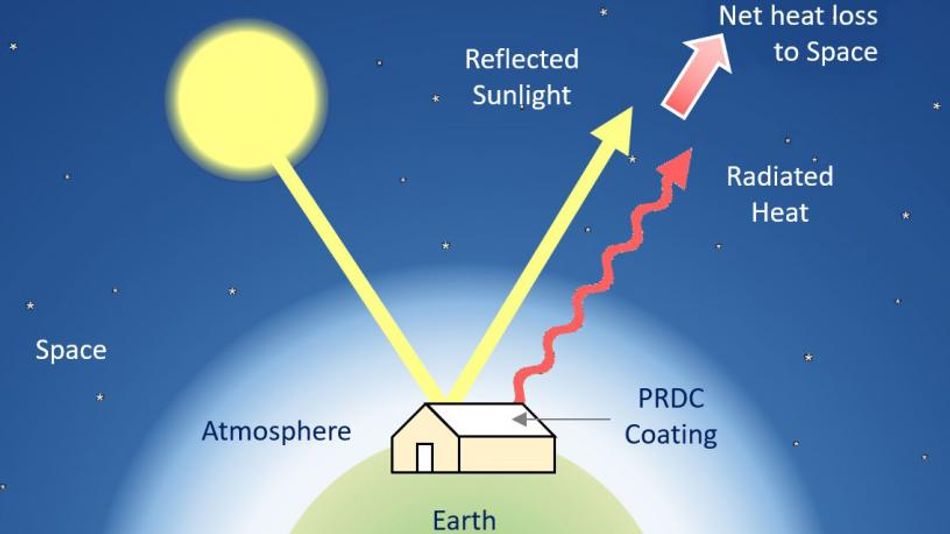 Illustration showing how passive daytime radiative cooling (PDRC) involves simultaneously reflecting sunlight and radiating heat into the cold sky to achieve a net heat loss. The process, which is spontaneous, can cool down structures to sub-ambient temperatures.

Yang, Yu, and Mandal are refining their design in terms of applicability, while exploring possibilities such as the use of completely biocompatible polymers and solvents. They are in talks with industry about next steps.

“Now is a critical time to develop promising solutions for sustainable humanity,” Yang notes. “This year, we witnessed heat waves and record-breaking temperatures in North America, Europe, Asia, and Australia. It is essential that we find solutions to this climate challenge, and we are very excited to be working on this new technology that addresses it.”

Yu adds that he used to think that white was the most unattainable color: “When I studied watercolor painting years ago, white paints were the most expensive. Cremnitz white or lead white was the choice of great masters, including Rembrandt and Lucian Freud. We have now demonstrated that white is in fact the most achievable color. It can be made using nothing more than properly sized air voids embedded in a transparent medium. Air voids are what make snow white and Saharan silver ants silvery.”

Columbia Engineering
Columbia Engineering, based in New York City, is one of the top engineering schools in the U.S. and one of the oldest in the nation. Also known as The Fu Foundation School of Engineering and Applied Science, the School expands knowledge and advances technology through the pioneering research of its more than 250 faculty, while educating undergraduate and graduate students in a collaborative environment to become leaders informed by a firm foundation in engineering. The School’s faculty are at the center of the University’s cross-disciplinary research, contributing to the Data Science Institute, Earth Institute, Zuckerman Mind Brain Behavior Institute, Precision Medicine Initiative, and the Columbia Nano Initiative. Guided by its strategic vision, “Columbia Engineering for Humanity,” the School aims to translate ideas into innovations that foster a sustainable, healthy, secure, connected, and creative humanity.

Could we make cars out of petroleum residue?