For years, scientists have looked for ways to cool molecules down to ultracold temperatures, at which point the molecules should slow to a crawl, allowing scientists to precisely control their quantum behavior. This could enable researchers to use molecules as complex bits for quantum computing, tuning individual molecules like tiny knobs to carry out multiple streams of calculations at a time.

While scientists have super-cooled atoms, doing the same for molecules, which are more complex in their behavior and structure, has proven to be a much bigger challenge.

Now MIT physicists have found a way to cool molecules of sodium lithium down to 200 billionths of a Kelvin, just a hair above absolute zero. They did so by applying a technique called collisional cooling, in which they immersed molecules of cold sodium lithium in a cloud of even colder sodium atoms. The ultracold atoms acted as a refrigerant to cool the molecules even further.

Collisional cooling is a standard technique used to cool down atoms using other, colder atoms. And for more than a decade, researchers have attempted to supercool a number of different molecules using collisional cooling, only to find that when molecules collided with atoms, they exchanged energy in such a way that the molecules were heated or destroyed in the process, called “bad” collisions.

In their own experiments, the MIT researchers found that if sodium lithium molecules and sodium atoms were made to spin in the same way, they could avoid self-destructing, and instead engaged in “good” collisions, where the atoms took away the molecules’ energy, in the form of heat. The team used precise control of magnetic fields and an intricate system of lasers to choreograph the spin and the rotational motion of the molecules. As result, the atom-molecule mixture had a high ratio of good-to-bad collisions and was cooled down from 2 microkelvins to 220 nanokelvins.

“Collisional cooling has been the workhorse for cooling atoms,” adds Nobel Prize laureate Wolfgang Ketterle, the John D. Arthur professor of physics at MIT. “I wasn’t convinced that our scheme would work, but since we didn’t know for sure, we had to try it. We know now that it works for cooling sodium lithium molecules. Whether it will work for other classes of molecules remains to be seen.”

Their findings, published today in the journal Nature, mark the first time researchers have successfully used collisional cooling to cool molecules down to nanokelvin temperatures.

Ketterle’s coauthors on the paper are lead author Hyungmok Son, a graduate student in Harvard University’s Department of Physics, along with MIT physics graduate student Juliana Park, and Alan Jamison, a professor of physics at the University of Waterloo and visiting scientist in MIT’s Research Laboratory of Electronics. 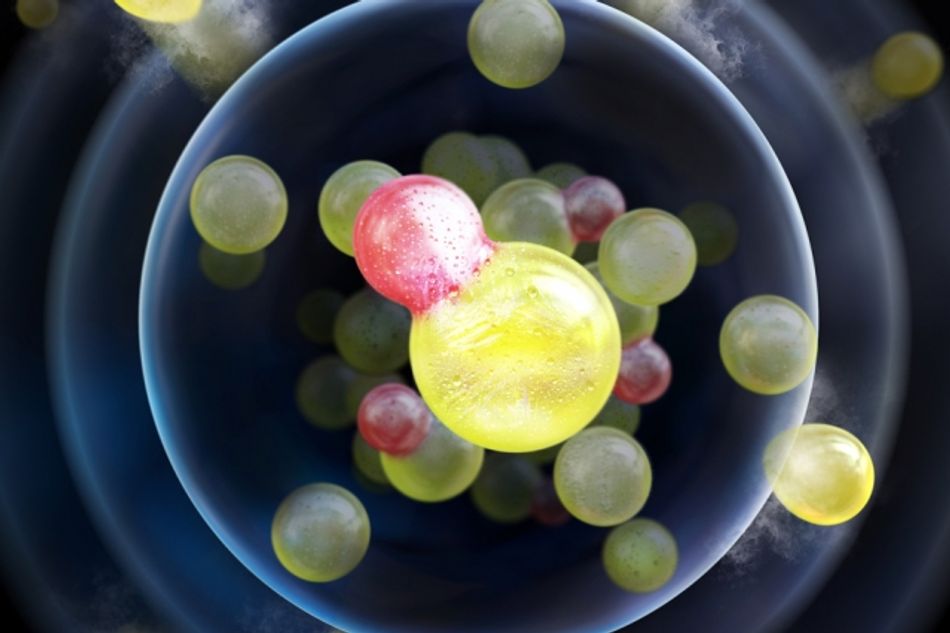 A new refrigerator for molecules. Sodium atoms (yellow spheres) collide with sodium-lithium molecules (combined-yellow-red-spheres). The atom-molecule mixture is trapped in an optical trap whose effective edge is shown as a white rim. As the trap is loosened (depicted as a dimmer rim), the most energetic sodium atoms leave the trap, providing evaporative cooling. The cooling is transferred to the molecules via elastic collisions. The frost on the molecules indicates that they have reached a temperature of 200 billionths of a degree Kelvin. Figure credit: Pilsu Heo at Micropicture (South Korea)

In the past, scientists found that when they tried to cool molecules down to ultracold temperatures by surrounding them with even colder atoms, the particles collided such that the atoms imparted extra energy or rotation to the molecules, sending them flying out of the trap, or self-destructing all together by chemical reactions.

The MIT researchers wondered whether molecules and atoms, having the same spin, could avoid this effect, and remain ultracold and stable as a result. They looked to test their idea with sodium lithium, a “diatomic” molecule that Ketterle’s group experiments with regularly, consisting of one lithium and one sodium atom.

“Sodium lithium molecules are quite different from other molecules people have tried,” Jamison says. “Many folks expected those differences would make cooling even less likely to work. However, we had a feeling these differences could be an advantage instead of a detriment.”

The researchers fine-tuned a system of more than 20 laser beams and various magnetic fields to trap and cool atoms of sodium and lithium in a vacuum chamber, down to about 2 microkelvins — a temperature Son says is optimal for the atoms to bond together as sodium lithium molecules.

Once the researchers were able to produce enough molecules, they shone laser beams of specific frequencies and polarizations to control the quantum state of the molecules and carefully tuned microwave fields to make atoms spin in the same way as the molecules.  “Then we make the refrigerator colder and colder,” says Son, referring to the sodium atoms that surround the cloud of the newly formed molecules. “We lower the power of the trapping laser, making the optical trap looser and looser, which brings the temperature of sodium atoms down, and further cools the molecules, to 200 billionths of a kelvin.”

The group observed that the molecules were able to remain at these ultracold temperatures for up to one second. “In our world, a second is very long,” Ketterle says. “What you want to do with these molecules is quantum computation and exploring new materials, which all can be done in small fractions of a second.”

If the team can get sodium lithium molecules to be about five times colder than what they have so far achieved, they will have reached a so-called quantum degenerate regime where individual molecules become indistinguishable and their collective behavior is controlled by quantum mechanics. Son and his colleagues have some ideas for how to achieve this, which will involve months of work in optimizing their setup, as well as acquiring a new laser to integrate into their setup.

“Our work will lead to discussion in our community why collisional cooling has worked for us but not for others,” Son says “Perhaps we will soon have predictions how other molecules could be cooled in this way.”

Quantum computing. Unlike traditional computers that use bits, quantum computers use qubits to encode information as zeros or ones, or both at the same time.