The share of electric vehicles on our roads is increasing, ranging from smaller urban vehicles to larger sedans and SUVs. However, e-mobility still faces a number of challenges: whether it concerns vehicles that drive on steep roads, sports cars that need to quickly reach top speeds, or vehicles that need to tow a trailer or caravan. Together with German high-tech multinational Bosch, PhD candidate Caiyang Wei has developed an automatic transmission system for electric cars that ensures an optimal balance between efficiency and power, while potentially lowering the total cost for both manufacturer and user. Wei recently defended his thesis at the Eindhoven University of Technology (TU/e).

The electric vehicle (EV) market is currently dominated by so-called single-speed transmissions, which use a fixed transmission to transfer power from the electric motor to the wheels. Although simple in design, fixed transmissions create conflicting requirements for the vehicle. At low speeds, the vehicle has to offer good drive-off performance, resulting in large and heavy designs that have a negative impact on the car’s ability to accelerate efficiently. Large motors and batteries are also bad news for the car’s energy consumption, driving range, and cost.

To solve these problems, a continuously variable transmission (CVT) is a good alternative. CVT is a system widely used in non-electric cars, and allows a vehicle to automatically adjust the RPM (revolutions per minute) and torque of the car’s motor according to its speed, thus ensuring an optimal balance between efficiency and performance.

Together with researchers and engineers at Bosch, a German high-tech multinational, Caiyang Wei  has developed and tested a new version of CVT that significantly improves the efficiency and performance of electric cars. The researchers used an optimization method that not only accounts for control of the car’s speed, energy consumption, and heat generation, but also considers the physical design of the car’s electric motor and transmission system.

Using this method, which combines machine learning algorithms with thorough analysis of measurement data, the researchers were able to design a system that is optimal in both performance and efficiency, and also potentially reduces cost, both for the manufacturer and the user. 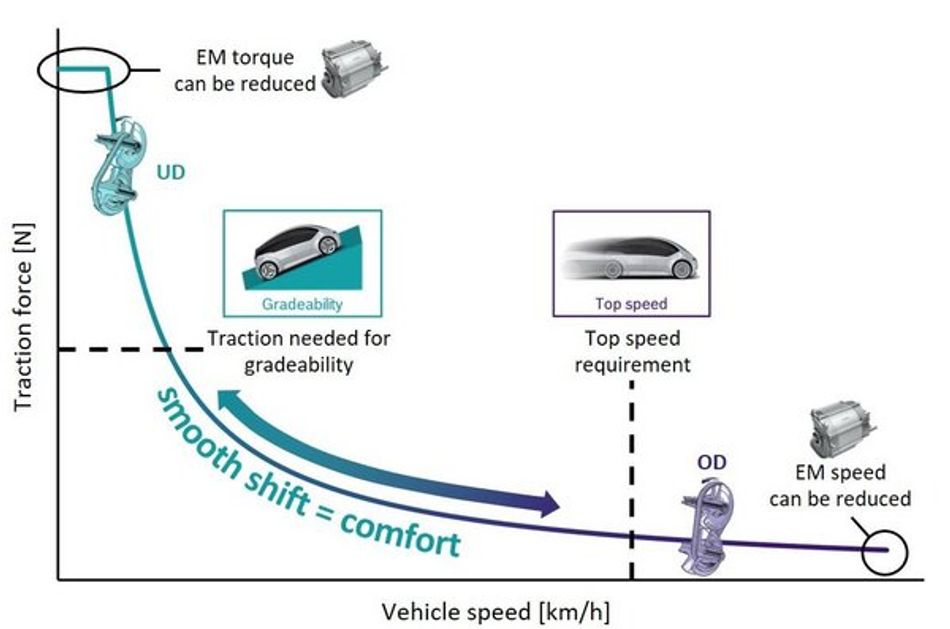 This is how Continuously Variable Transmission works in an electric car. As the car speed (x-axis) increases, traction (y-axis) decreases. The CVT ensures a smooth, comforable transition.

Bosch has integrated Wei’s work in a new powertrain (i.e. the source of propulsion in combination with the drive system) called CVT4EV. According to Bosch, the new system controls result in faster accelerations, higher top speeds, and more torque at the wheels for towing and off-road performance.

“By operating the electric motor at its most efficient operating point, the CTV also ensures lower energy consumption. In addition, due to the reduced torque and speed requirements of the electric motor, CVT4EV makes a more compact electric motor possible. Alternatively, a larger driving range can be selected with the same motor”, says Gert-Jan van Spijk, Transmission Director at Bosch transmission technoogy in a press release.

Wei is very happy with the results of his work, which concludes four years of research at the Control Systems Technology group at the department of Mechanical Engineering. “Our investigations have shown that even though the current EV market is dominated by single-speed transmissions, multi-speed transmissions like our new CVT can be considered as competitive alternatives”.

The optimization method that has been implemented in CVT4EV, will now be used by Bosch to further improve the design of future CVT systems for electric vehicles.

A deep dive into the carbon footprint of alternative fuel vehicles

A deep dive into the carbon footprint of alternative fuel vehicles

Where your alternative fuel car is made as well as where and how it is driven significantly impacts its lifetime carbon emissions.