The ROboMObil (ROMO) has been transferring space research to the road since 2011. The project began a few years earlier at the German Aerospace Center (Deutsches Zentrum für Luft- und Raumfahrt; DLR) when researchers at the Robotics and Mechatronics Center (RMC) had the idea to combine rover technology developed for Mars and lunar vehicles with electric mobility. This is how one of the world's first robotic electric vehicles was created in Oberpfaffenhofen. It can drive autonomously, turn within its own length and move sideways or at an angle. This makes parking in narrow spaces child’s play. With the help of ROMO, new technologies can be developed that make vehicles extremely manoeuvrable and safe when using Artificial Intelligence (AI).

The streamlined, futuristic design received mixed reactions from car enthusiasts. However, at its first international appearance, during the Berlin Air Show (Internationale Luft- und Raumfahrtausstellung; ILA) in 2012, the two-seater quickly became a crowd favourite. During the same year, the team also received professional recognition. With the eCarTec Award – the Bavarian state prize for electric mobility – the ROboMObil was honoured as the 'most significant product vision in electric mobility'. 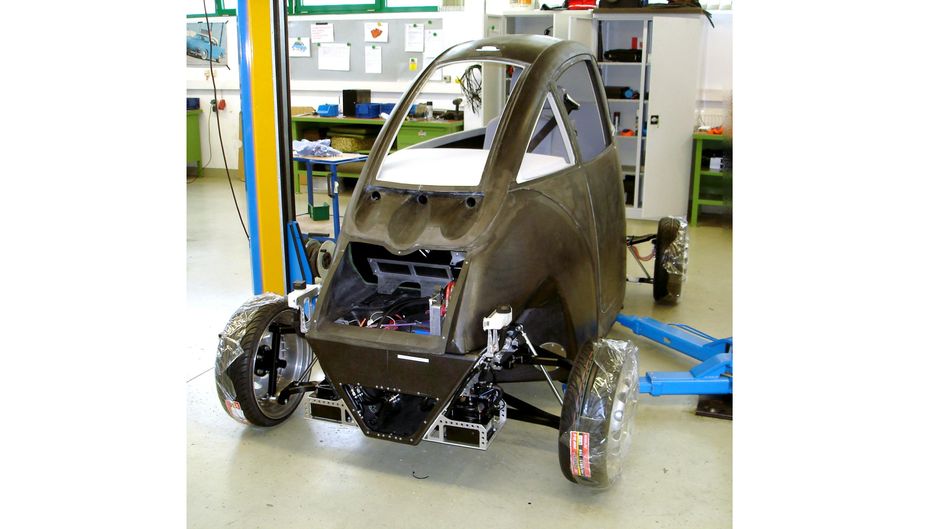 'Marriage' of chassis and bodywork. Credit: © DLR. All rights reserved

Autonomous driving thanks to space research

Project Manager Jonathan Brembeck has been shaping this vision since the initial drafts for the concept. At the DLR Institute of System Dynamics and Control at the RMC, he has witnessed how an idea on paper became a unique vehicle suitable for the road. Brembeck vividly recalls the debut drive 10 years ago: "I was excited to see if everything would work. The mechanics and electrics ran smoothly, and the battery also worked reliably. It was just the control system that was not quite optimal yet." A heart-stopping moment. "But with a few tweaks we were able to adjust the settings and then the ROboMObil drove as desired – that was an incredible feeling," says the researcher.

ROboMObil can be operated by a person in the vehicle or remotely, both via a sidestick. Fully autonomous driving is also possible. Its 18 cameras capture the environment in a 360-degree panoramic view. This enables ROMO to find its way independently in unknown environments, even without the help of a map. The researchers originally developed this autonomous driving concept for space robotics. Today, the RMC algorithms are used in the intelligent driver assistance systems of leading car manufacturers.

The core structure of the vehicle is also derived from space research – all four wheel units are equipped with propulsion, steering, damping and brakes. These robotic wheel units are coordinated with the help of an intelligent central control system so that the vehicle can move in all directions. ROMO is also the first robotic electric vehicle with a drive-by-wire central control system – the robotic wheel units are controlled via electrical cables without a mechanical coupling. A conventional steering wheel is therefore not required.

Over the years, the research vehicle had to prove itself during technology demonstrations for various industrial partners. Finally, they were allowed to drive ROboMObil themselves on a virtually marked course using the sidestick. "It is always exciting to see how well outsiders can handle the system," says Brembeck. Some of the guest drivers proved to be particularly skilled. This led to the assumption among the participants that prior experience gained at home while gaming could be advantageous when controlling ROMO. A ranking list of the best drivers was also compiled, "… but this list will remain confidential forever."

Due to the pandemic, it will be a while until the next test drive. However, everyone can now go on a virtual discovery tour of ROMO. A new blog portal with videos, images and scientific documents offers insights into more than 10 years of research work. Visitors can retrace the production stages, follow the first test drive and accompany ROMO at various events. "Technology demonstrations are difficult during a pandemic like this. We are all the more pleased that we can now present our research work to a broad audience in a digital way," explains Brembeck.

Since its first research journey in 2011, DLR's robotic electric vehicle has been making valuable contributions as a technology platform. It has already been on the road for a wide variety of research topics, from optimised vehicle dynamics control to the development of energy management concepts. Thanks to its autonomous and exceptionally flexible driving characteristics as well as the option to steer without a wheel using drive-by-wire technology, ROMO continues to be a sought-after research partner.

In future, the project team will increasingly work in the field of highly automated battery-powered electric vehicles. Among other things, they are developing AI-supported methods for control and system diagnostics. In the coming years, the Oberpfaffenhofen team will also develop cloud-based approaches to be able to use even larger datasets and more complex control architectures. ROboMObil is thus ready for the next stages of its research journey.

Autonomous boats could be your next ride

Five years in the making, MIT’s autonomous floating vessels get a size upgrade and learn a new way to communicate aboard the waters.

Step inside the facility of Arrival's team | Roborace

Since February 2021, ITMO University, together with the Research and Design Institute for Information Technology, Signalling and Telecommunications in Railway Transportation (JSC NIIAS) collaborated on the development of a driverless train that will be launched in Moscow Central Circle.