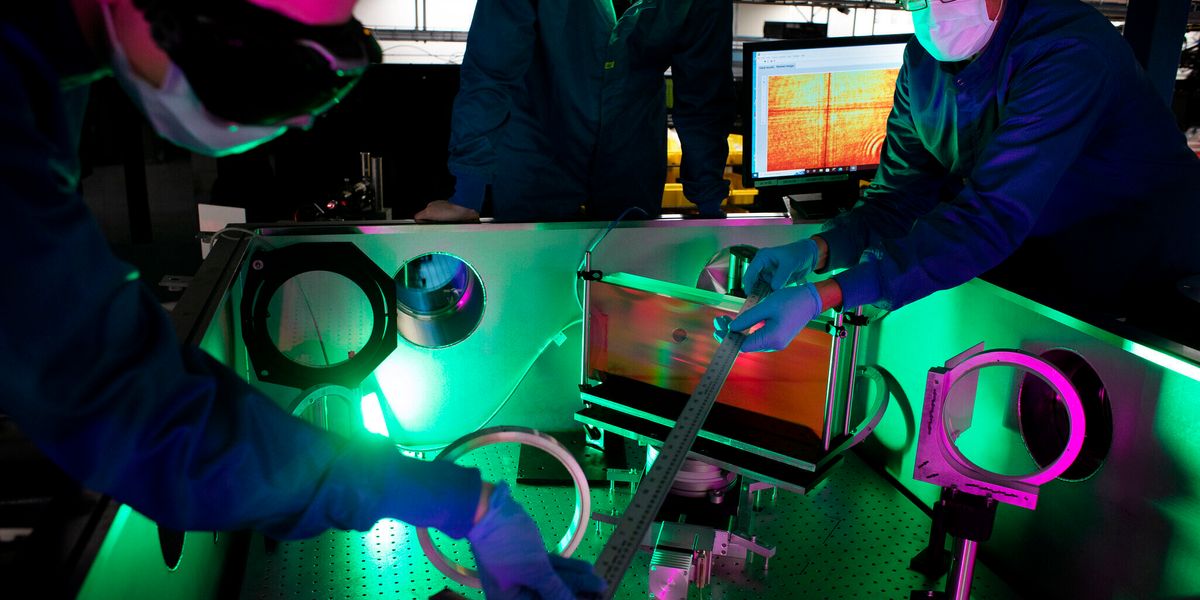 The laser that will be the most powerful in the United States is preparing to send its first pulses into an experimental target at the University of Michigan.

Funded by the National Science Foundation, it will be a destination for researchers studying extreme plasmas around the U.S. and internationally.

Called ZEUS, the Zetawatt-Equivalent Ultrashort pulse laser System, it will explore the physics of the quantum universe as well as outer space, and it is expected to contribute to new technologies in medicine, electronics and national security.

“ZEUS will be the highest peak power laser in the U.S. and among the most powerful laser systems in the world. We’re looking forward to growing the research community and bringing in people with new ideas for experiments and applications,” said Karl Krushelnick, director of the Center for Ultrafast Optical Science, which houses ZEUS, and the Henry J. Gomberg Collegiate Professor of Engineering.

The first target area to get up and running is the high-repetition target area, which runs experiments with more frequent but lower power laser pulses. Michigan alum Franklin Dollar (M.Eng Electrical Engineering ’10, PhD Applied Physics ’12), an associate professor of physics and astronomy at the University of California Irvine, is the first user, and his team is exploring a new kind of X-ray imaging.

They will use ZEUS to send infrared laser pulses into a gas target of helium, turning it into plasma. That plasma accelerates electrons to high energies, and those electron beams then wiggle to produce very compact X-ray pulses.

Dollar’s team investigates how to make and use these new kinds of X-ray sources. Because soft tissues absorb X-rays at very similar rates, basic medical X-ray machines have to deliver high doses of radiation before they can distinguish between a tumor and healthy tissue, he said.

But during his doctoral studies under Krushelnick, Dollar used ZEUS’s predecessor to image a damselfly, showing the promise of laser-like X-ray pulses. Different soft tissues within the damselfly’s carapace delayed X-rays to different degrees, creating interference patterns in the X-ray waves. Those patterns revealed the soft structures with very short X-ray pulses—a few millionths of a billionth of a second—and hence small X-ray doses.

“We could see every little organ as well as the tiny micro hairs on its leg,” Dollar said. “It’s very exciting to think of how we could use these laser-like X-rays to do low-dose imaging, taking advantage of the fact that they’re laser-like rather than having to rely on the absorption imaging of the past.”

In this first run, the ZEUS team is starting at a power of 30 terawatts (30 trillion watts), about 3% of the current most powerful lasers in the U.S. and 1% of ZEUS’s eventual maximum power.

“During the experiment here, we’ll put the first light through to the target chamber and develop towards that 300 terawatt level,” said John Nees, a research scientist in electrical and computer engineering.

Nees leads the building of the laser alongside Anatoly Maksimchuk, a research scientist in electrical and computer engineering, who leads the development of the experimental areas.

Dollar’s team plans to return late in the fall for another run, aiming for the full power intended for the high repetition target area, 500 terawatts. The maximum power of 3 petawatts, or quadrillion watts, will go to different target areas to be completed later. The first test using the target area for ZEUS’s signature experiment is anticipated in 2023.

That experiment will use the laser to generate a beam of high-speed electrons and then run the electrons directly into the laser pulses. For the electrons, that simulates a zetawatt laser pulse—a million times more powerful than ZEUS’s 3 petawatts. In addition to probing the foundations of our understanding of the quantum universe, ZEUS will enable researchers to study what’s going on inside some of the most extreme objects in space.

“Magnetars, which are neutron stars with extremely strong magnetic fields around them, and objects like active galactic nuclei surrounded by very hot plasma—we can recreate the microphysics of hot plasma in extremely strong fields in the laboratory,” said Louise Willingale, associate director of ZEUS and an associate professor of electrical and computer engineering. 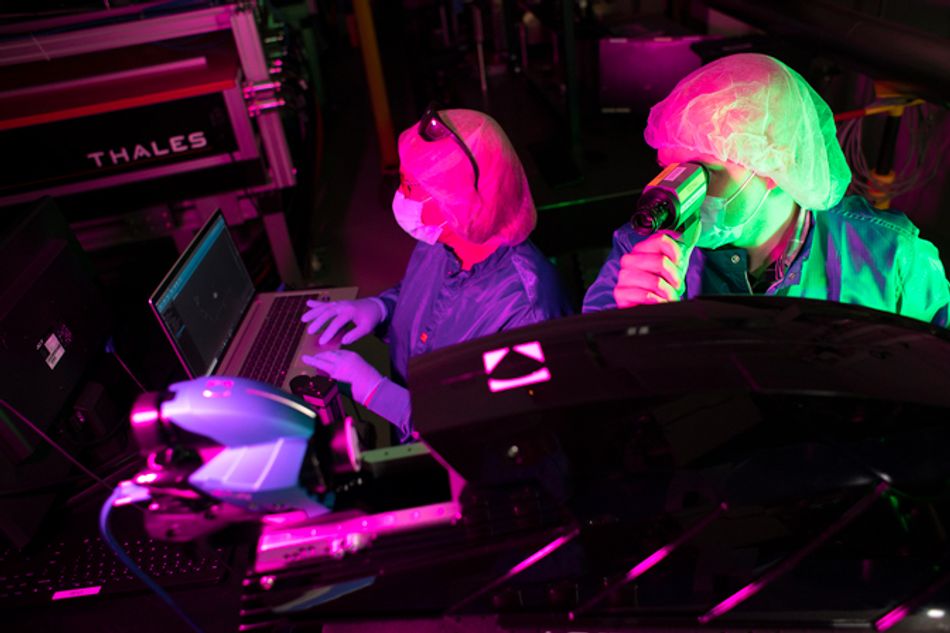 ZEUS offers not only scientific and technological opportunities, but with the discipline-wide effort to grow the laser physics workforce, it creates career opportunities as well. Dollar brought his whole team to get the hands-on experience of a commissioning experiment at a world-class laser.

“At Michigan Engineering, we’re fortunate to have some of the strongest academic and research capabilities in the world, and we’re leveraging that strength to improve the lives of real people. ZEUS exemplifies our commitment to fundamental science—using engineering to understand matter at its most basic levels and then using that knowledge to build solutions to real-world problems,” said Alec D. Gallimore, the Robert J. Vlasic Dean of Engineering. 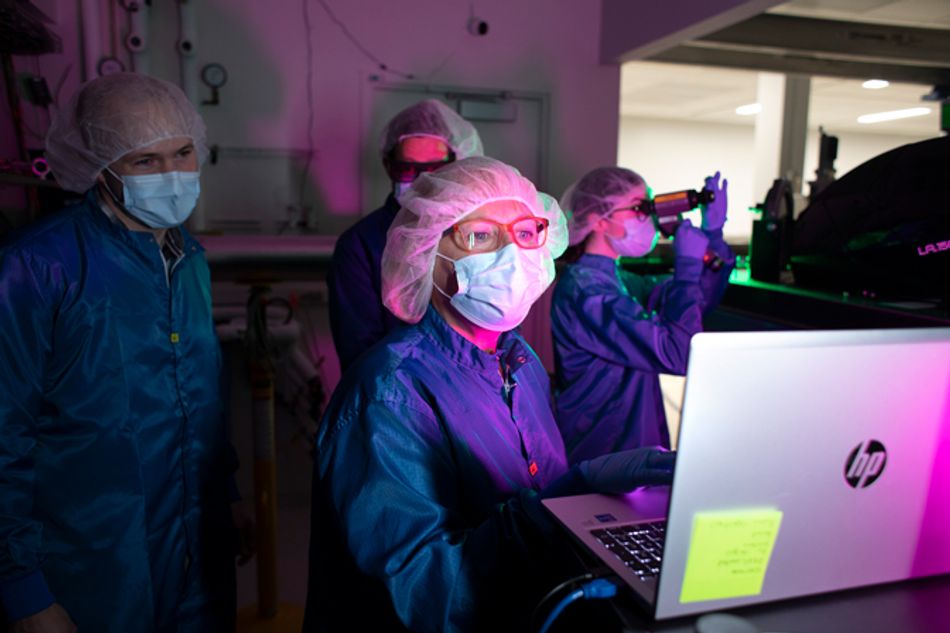 The first experiment milestone feels especially hard-earned because of the way the pandemic disrupted construction early on, when the team was still reconfiguring the building to accommodate a much larger laser. Project manager Franko Bayer reconsidered the schedules, identifying work that could be done in parallel rather than in sequence, to keep as close as possible to the initial timelines.

“Our team at ZEUS is very excited that our hard work paid off, and despite all the post-pandemic equipment delivery delays, we are on schedule to our original timeline.  This experiment is the beginning to gradually ramp up the power until full commissioning in the fall of 2023,” Bayer said.

Graphene made with lasers for wearable health devices

As NASA prepares to send astronauts back to the Moon to live and explore, capabilities for space-based manufacturing of sensors, circuits, and other electronics will become increasingly critical. Recent microgravity flights have helped to advance cutting-edge methods for 3D printing of electronics

Scientists at ETH Zurich are working to develop information-​processing switching systems in biological cells. Now, for the first time, they have developed an OR switch in human cells that reacts to different signals.

Graphene made with lasers for wearable health devices