Choosing the right filament for 3D printing can seem like a daunting task, especially when it comes to picking the type of material, let alone the brand. The truth is, there is no single right material for fused filament fabrication (FFF) 3D printing: choosing the right filament depends entirely on the application at hand. In this article we’ll look at two 3D printing materials with fairly similar profiles, ASA and ABS, to understand what their differences are and when using them makes the most sense.

What is ASA filament?

Acrylonitrile styrene acrylate (ASA) filament is a thermoplastic material for FFF 3D printing. Though not as prevalent a material compared to ABS, ASA has many potential applications due to its beneficial material and mechanical properties. In fact, the material bears many similarities to ABS, but offers superior properties, especially when it comes to UV resistance.

As a material, ASA was first launched by BASF in the early 1970s under the material name Luran S. [1] Its creation was driven by the need—especially by the automotive industry—for material with similar properties to ABS but with better resistance to weather and harsh environments. Chemically speaking, ASA is similar to ABS but adds a grafted acrylic ester elastomer as the styrene and acrylonitrile undergo copolymerization. This has imparted the material with superior UV stability, improving the thermoplastic’s overall weather resistance.

Though ASA is not as widely available as ABS, there are today a number of filament suppliers that offer the material—often in a variety of colors. ASA filament suppliers include Stratasys, PolyMaker, ColorFabb, Raise3D, Zortrax, Fillamentum, and 3DXTech, among others. 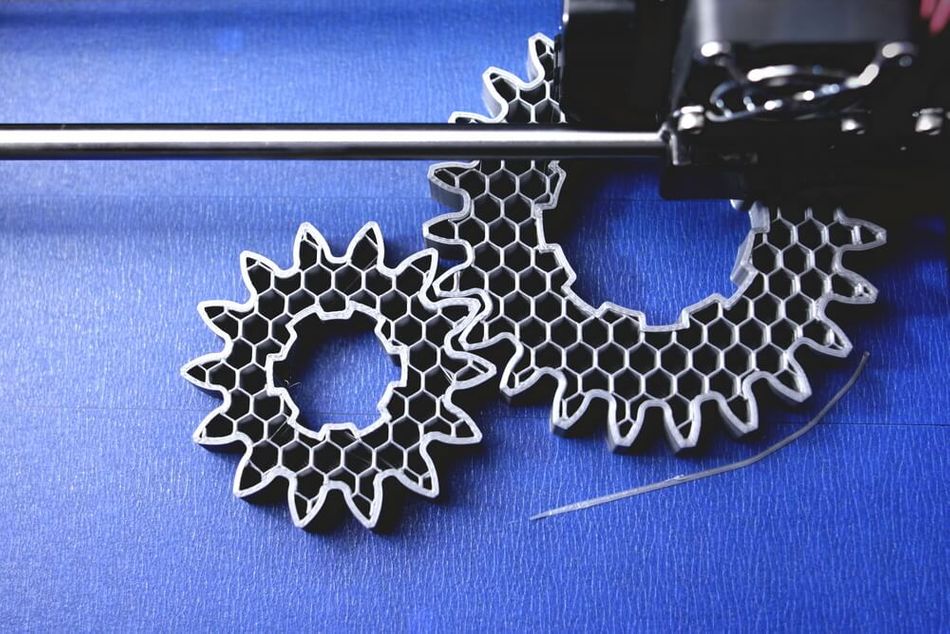 ASA is well suited to outdoor applications due to its UV resistance.

What is ABS filament?

Acrylonitrile butadiene styrene (ABS) is one of the most broadly used thermoplastic filaments in extrusion-based 3D printing. There is no surprise why: the material is easy to process and demonstrates good material properties for printed parts. It is also readily accessible to both professional and hobbyist 3D printing users.

As a plastic, ABS was first launched commercially in the 1950s by Borg-Warner Corporation. Before being used as a 3D printing filament, it was predominantly processed using injection molding to create robust and lightweight parts for automotive interiors, appliances, pipe fittings, toys (such as LEGO), and more.[3] Today, the material is still used with injection molding, but it also has a growing share of 3D printing applications.

ABS filament is known for a range of mechanical properties, including good impact strength, abrasion resistance, and chemical resistance. ABS is also characterized by a low melting point compared to other engineering thermoplastics (about 200°C) which, while precluding it from certain high-temperature applications, makes it easy to process on most FDM/FFF 3D printers.[4] Critically, ABS is also known for its low density, which leads to lightweight parts. The material’s combination of good impact resistance and lightweight has made it especially popular in the automotive sector, where reductions in vehicle weight lead to better fuel efficiency. Other applications include functional prototypes, tooling, and end-use parts in a range of consumer and industrial sectors.

ASA and ABS filaments share a number of characteristics, but also have important differences. These differences should influence which of the two 3D printing materials you choose to work with. But let’s start with the things they have in common.

As thermoplastics, ASA and ABS both share some basic properties. In other words, all thermoplastics are characterized by their ability to be melted into liquid form and hardened when cooled. This capability is imperative when it comes to FFF 3D printing, as solid plastic filaments are passed through a heated print nozzle (also called hotend), which extrudes the melted material onto a build platform. As layers of the material are extruded, they solidify into an object as the plastic cools.

In addition to their basic thermoplastic makeup, ASA and ABS have a few mechanical properties in common, including high impact resistance and toughness. This means both 3D printing filaments are well suited for functional prototypes, jigs and fixtures, as well as production-grade parts. Both materials also have high glass transition temperatures (105°C for ABS and 100°C for ASA), especially when compared to other filaments like PLA, Nylon, and PETG. Glass transition temperature is the temperature at which the filament changes from a hard solid to an amorphous, rubber-like solid.[5] When it comes to post-processing, both ASA and ABS 3D printed parts can be easily sanded down and smoothed using acetone.

ASA and ABS do share a couple of less desirable features, including their risk of warping and shrinking on the 3D printer print bed. Warping and shrinking occur if the printed materials cool too quickly. This causes the material to contract and solidify, which can lead to poor adhesion and ultimately failed prints. Fortunately, there are steps that can be taken to mitigate these risks, such as temperature control for printing and cooling, and better first layer adhesion with the use of a heated bed, kapton tape, or special adhesives. That being said, some brands of ASA filament do boast better layer adhesion and less shrinkage than their ABS counterparts. 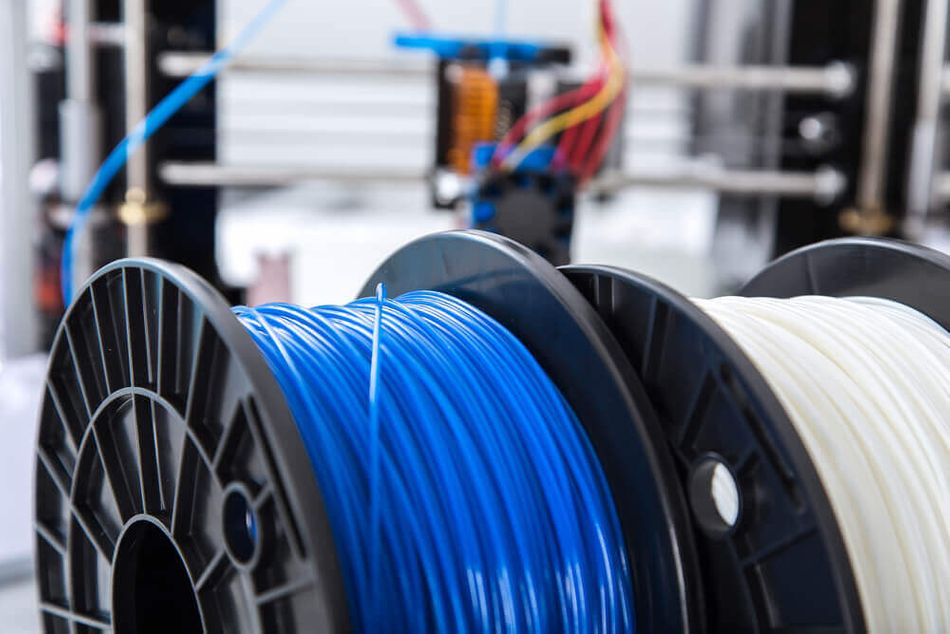 Both ASA and ABS come with a risk of warping, which can be mitigated by temperature control and other settings.

A final thing to note about both ASA and ABS is that the materials should be used within well-ventilated spaces. When 3D printed, ASA releases strong-smelling and toxic fumes, so ventilation is vital. ABS also emits a toxic chemical when it is melted, which can lead to headaches and drowsiness with overexposure.[6] In both materials, the toxicity is related to the thermoplastic's styrene component. All this means is that the 3D printing filaments should be used with proper filtration systems or in a well ventilated space.

In summary, the key similarities between ASA and ABS are:

When it comes to the differences between ASA and ABS filaments, the most important to mention is ultraviolet (UV) resistance. ABS, while tough, is known to degrade quickly when exposed to UV light. This means that the material has limited benefits when used for outdoor applications, where sun exposure is inevitable. When left out, 3D printed parts made from ABS lose their original color (often yellowing) and can lose some of their original strength and integrity.

ASA, by contrast, was specifically engineered for UV resistance. The 3D printing filament is therefore ideally suited to outdoor applications and more rugged use. Additionally, ASA filaments are more resistant to moisture than ABS, a feature which further protects them from the elements and severe weather conditions.[7]

ASA filament has a higher temperature resistance to traditional ABS filaments, which offers both a distinct advantage and disadvantage. First, ASA is well suited to applications that require better heat resistance, such as heat-stressed components. On the downside, however, ASA requires higher printing temperatures to process, which consumes more energy than ABS filaments, thus driving up operational costs. That being said, both ABS and ASA benefit from enclosed and temperature controlled 3D printing systems.

For many 3D printing users, this next difference between ASA and ABS is a crucial one: material cost. As one of the most widely available thermoplastic materials available for FFF 3D printing, ABS is also one of the most cost-effective. As a newer and more niche entry in the filament market, ASA material tends to be more expensive. In some cases, especially for hobbyists, ASA spools can be cost-prohibitive, making ABS the better option. In industrial or professional use cases, however, the additional cost may well be worth the added benefits of UV resistance.

In summary, the key differences between ASA and ABS are:

As we said earlier, what it comes down to is what you are using the material for. If you are setting out to 3D print a prototype or enclosure for indoor use, ABS is probably a good bet. If, on the other hand, you are undertaking a project to produce a functional prototype or end-use part that will be used in an outdoor environment and which can benefit from UV stability, ASA is by far the better option. It is also a good idea to ensure that the material in question is compatible with the 3D printer you are using. If your chosen brand of ASA filament requires an enclosed build chamber, it won’t work well with an open extrusion system. So, while this article provides a helpful overview of ABS and ASA filaments, it is still a good idea to look at filament specifications to find the right material and brand for your needs.