Delivery at the DLR site in Bremen. Credit: © DLR. All rights reserved

The origin of Mars’ two moons, Phobos and Deimos, is still unclear. To unravel this mystery, the Japan Aerospace Exploration Agency (JAXA) Martian Moons eXploration (MMX) mission is scheduled to launch in 2024.

The origin of Mars’ two moons, Phobos and Deimos, is still unclear. To unravel this mystery, the Japan Aerospace Exploration Agency (JAXA) Martian Moons eXploration (MMX) mission is scheduled to launch in 2024. A German-French rover will be on board to explore the surface of the 27-kilometre-diameter Phobos in detail. The German Aerospace Center (Deutsches Zentrum für Luft- und Raumfahrt; DLR) has now completed a major part of the rover. The CFRP structure, which was created in collaboration with several DLR institutes, including the uprighting and locomotion system, was delivered this week from Bremen to the French space agency CNES in Toulouse. Here it will be completed by the summer of 2023 with the installation of all instruments and systems. The MMX rover will then also be equipped with its miniRAD radiometer and RAX spectrometer. Both instruments were built at the DLR site in Berlin and sent to Toulouse beforehand. 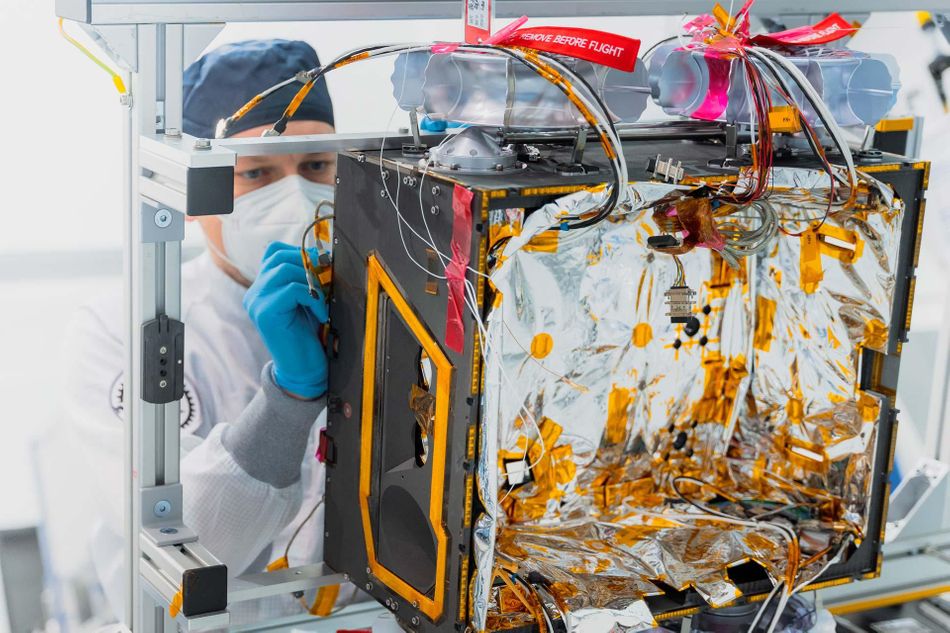 CFRP structure of the MMX rover with uprighting and locomotion system. Credit: © DLR. All rights reserved

"With the MMX rover, we are breaking new ground in terms of technology, because never before has an exploration vehicle with wheels travelled on a small celestial body with only one-thousandth of the Earth's gravitational pull," says Dr Markus Grebenstein from the DLR Institute of Robotics and Mechatronics in Oberpfaffenhofen. "As the rover free-falls onto Phobos following separation from the spacecraft, it will perform several ‘somersaults’ upon touchdown without damage and come to rest in an unpredictable position. From this situation, it must autonomously upright itself with the help of the propulsion system and unfold its solar panels," Grebenstein, DLR's project manager for the MMX rover, continues. "Finally, it will travel very carefully at only a few millimetres per second in order to retain contact with the ground with its special wheels despite the low gravity," adds Stefan Barthelmes from the DLR Institute of System Dynamics and Control in Oberpfaffenhofen. The uprighting and locomotion system was developed and built at DLR's Robotics and Mechatronics Center in Oberpfaffenhofen. The DLR Institute of Composite Structures and Adaptive Systems contributed the particularly lightweight carbon structure. 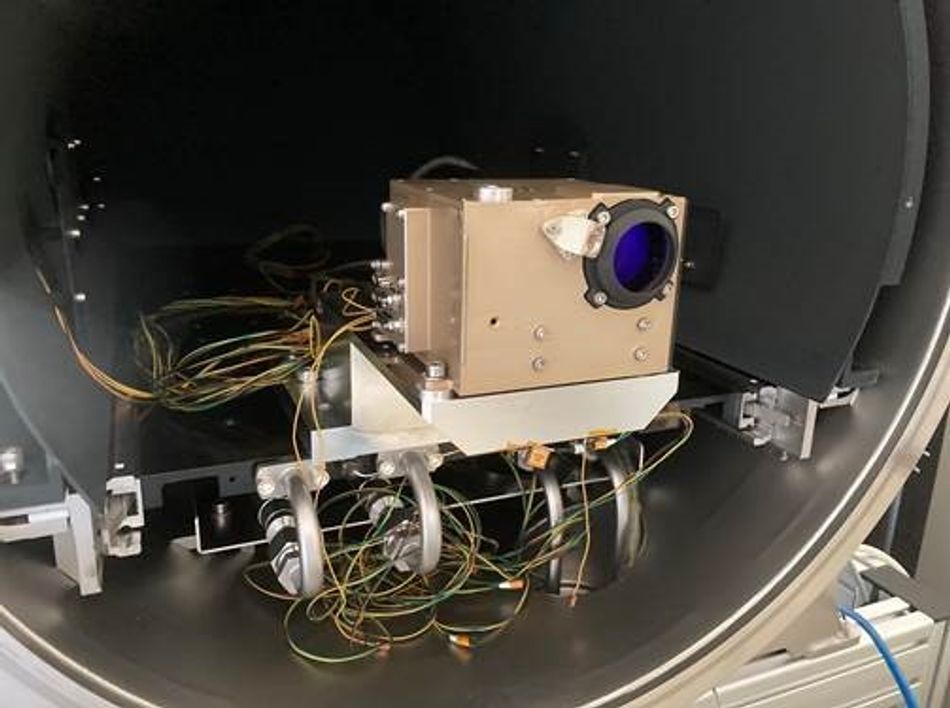 The Raman spectrometer RAX (RAman spectroscopy for MMX) is a development led by the DLR Institute of Optical Sensor Systems with the participation of JAXA and the Spanish space agency INTA. RAX will determine the mineralogical composition of Phobos' surface along the rover's route. Credit: DLR (CC BY-NC-ND 3.0)

Upon separation from the MMX spacecraft, the 25-kilogram rover will descend about 50 metres to the surface of Phobos. This has already been tested in initial drop tests at the DLR Institute of Space Systems, where integration has now also taken place. The rover will explore the physical and mineralogical properties of the moon’s surface for 100 days. The two DLR instruments miniRAD and RAX will be used for this purpose. The miniRAD radiometer from the DLR Institute of Planetary Research will determine the surface temperature using infrared measurements. It will also allow conclusions to be drawn about the porosity of the surface material for comparison with other asteroid and comet samples. The Raman spectrometer RAX (RAman spectroscopy for MMX) is a development under the leadership of the DLR Institute of Optical Sensor Systems with the participation of JAXA and the Spanish Instituto Nacional de Técnica Aeroespacial (INTA). RAX will determine the mineralogical composition of Phobos’ surface along the rover's route. The minerals of a celestial body are closely related to its formation and history, and comparisons with measurements taken by other rovers on Mars will help scientists to better understand the martian system with its moons. 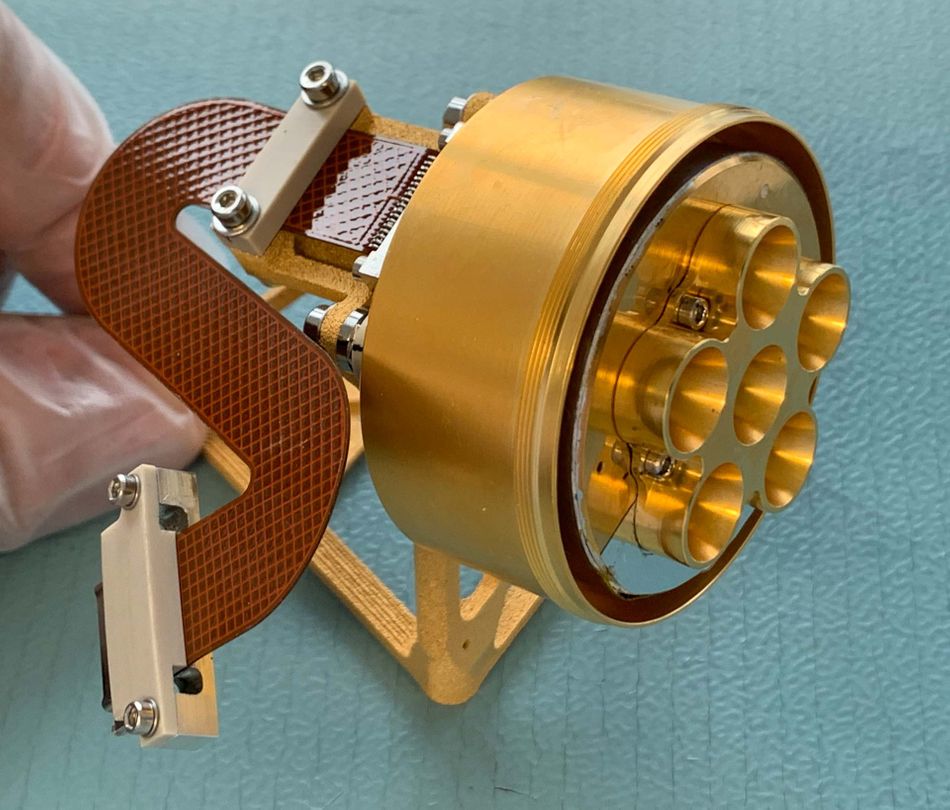 The radiometer miniRAD from the DLR Institute of Planetary Research will determine the surface temperature using infrared measurements. In addition, it will allow conclusions to be drawn about the porosity of the surface material in order to compare it with asteroid and comet samples. Credit: DLR (CC BY-NC-ND 3.0)

In addition to the two DLR instruments, two cameras attached to the wheels to keep an eye on the wheels and the ground, as well as two cameras for navigation, will be installed at CNES in Toulouse over the next few months. The engineering teams are also installing the solar panels, the power system, the radio system for contact with Earth, and the on-board computer in the rover. Then, the complete rover will undergo extensive testing with regard to its functionality and its resistance to the vibrations of the rocket launch and the extreme temperature fluctuations of more than 200 degrees Celsius on Phobos. The MMX rover will complete the tests under space conditions together with the Mechanical and Electrical Connection and Support System (MECSS) to the spacecraft, which is also provided by DLR.

The MMX spacecraft consists of three modules. The exploration module has landing legs, samplers and some instruments as well as the MMX rover on board. The exploration module is connected to the return module with the sample return capsule, which in turn is connected to a propulsion module housing propellant tanks and rocket engines. The launch of the Japanese spacecraft is currently planned for 2024 with an H-3 rocket from the Japanese Space Center in Tanegashima. Approximately one year after leaving Earth, the probe will enter orbit around Mars in 2025 to observe Phobos and Deimos. This will be followed by a quasi-orbit around the martian moon Phobos, where it will collect scientific data, set down the MMX rover it carries and take a sample from the lunar surface. After taking the sample, the spacecraft will return to Earth with the material collected on Phobos. The landing of the MMX rover on Phobos is planned for 2027, and the return to Earth with the samples in 2029. The rover's measurements and images on the Phobos surface will also serve as a reference for the orbiter instruments and help prepare the landing of the exploration module for sampling. 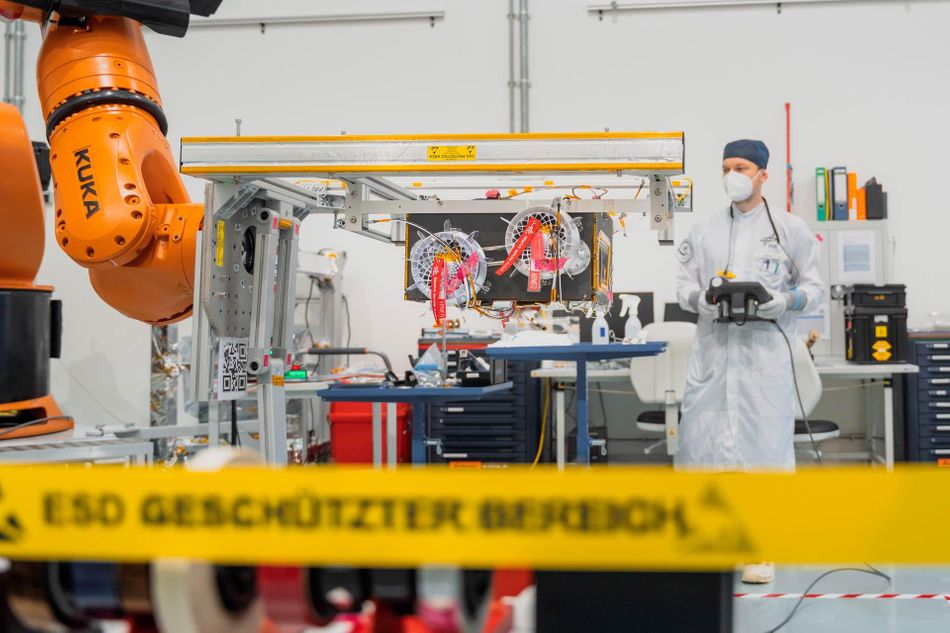 Integration of the MMX rover. Credit: © DLR. All rights reserved

The origin of fear and terror

In Greek mythology, Phobos and Deimos were the companions of Ares, the god of war, who in Roman antiquity had his counterpart in Mars, the god of war. They were discovered in 1877 by the American astronomer Asaph Hall. Due to their small size (Phobos is 27 kilometres in diameter and Deimos 15 kilometres), both moons are irregularly shaped and resemble asteroids. Thus, one theory is that Mars simply captured the two moons in the past, possible in the asteroid belt. However, both moons orbit Mars near the ecliptic plane on which all planets and most of their moons move around the Sun. In addition, both orbits are almost circular. Such a coincidence would be difficult to account for under the 'captured asteroids’ theory. This could be explained if Phobos and Deimos were remnants of a huge meteorite impact on Mars. MMX aims to solve this long-discussed mystery of planetary science. The formation of the Mars system is also key to better understanding the processes of planet formation in the Solar System. In any case, traces of Martian rocks are likely to be found on the surface of Phobos, which landed on Phobos as ejecta from later asteroid impacts. This means that the samples from Phobos could also bring material from Mars to Earth in the return capsule and thus into terrestrial laboratories. 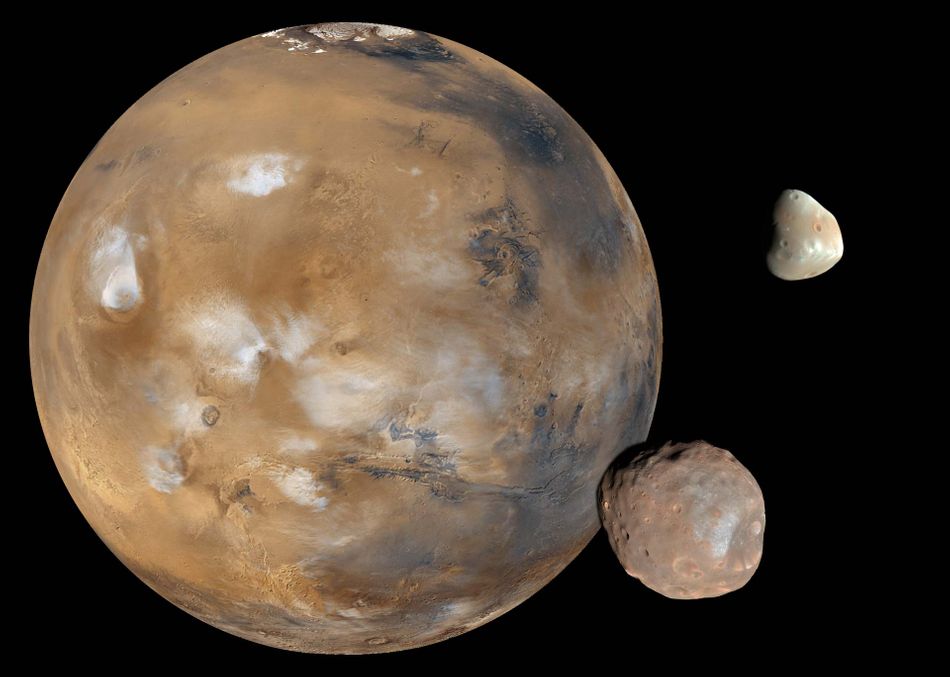 Mars' two moons, Deimos (above) and Phobos, are the targets of the MMX mission. Due to their small size (Phobos 27 kilometres, Deimos 15 kilometres), both moons are irregularly shaped. Their origin is still an unsolved mystery in planetary research. (image montage) Credit: DLR (CC BY-NC-ND 3.0)

MMX is a mission of the Japanese space agency JAXA with contributions from NASA, ESA, CNES (the French space agency) and DLR. CNES (Centre National d'Études Spatiales) and the German Aerospace Center (Deutsches Zentrum für Luft- und Raumfahrt; DLR) are jointly contributing a 25-kilogram rover to the Martian Moons eXploration Mission (MMX). The Franco-German MMX rover is being designed and built under the joint leadership of CNES and DLR. In particular, DLR is responsible for the development of the rover's landing gear, including the lightweight body, as well as the entire uprighting and locomotion system. DLR is also contributing the connection adapter to the MMX spacecraft and providing a Raman spectrometer and a radiometer as scientific experiments. These will analyse the surface composition and texture on Phobos. CNES is making significant contributions with camera systems for spatial orientation and exploration on the surface, as well as for the study of mechanical soil properties. CNES is also developing the rover's central service module, including the on-board computer and the power and communications system. After the launch of the MMX mission, the rover will be operated by CNES control centres in Toulouse (France) and DLR in Cologne (Germany).

For DLR, the institutes of System Dynamics and Control, Composite Structures and Adaptive Systems, of Space Systems, of Optical Sensor Systems, of Planetary Research, for Software Technology and the Microgravity User Support Center (MUSC) are also involved under the leadership of the DLR Institute of Robotics and Mechatronics.

The MMX mission is a continuation of an already long-standing successful cooperation between JAXA, CNES and DLR. It builds on the previous mission Hayabusa2, in which JAXA sent a spacecraft to the asteroid Ryugu with the German-French MASCOT lander on board. On 3 October 2018, MASCOT landed on Ryugu and sent spectacular images of a landscape ridden with boulders and rocks, and virtually no dust. Hayabusa2 collected samples from Ryugu and brought them to Earth on 6 December 2020.

Professor of Mechanical Engineering Kenji Shimada and his team of researchers are using drone technology to help detect and restore damaged water canals in Japan that are critical for the agricultural economy.