Lithium-ion battery capacity can be vastly improved if, on the microscale, their electrodes have pores and channels. An interdigitated geometry, though it does allow lithium to transport through the battery efficiently during charging and discharging, is not optimal. 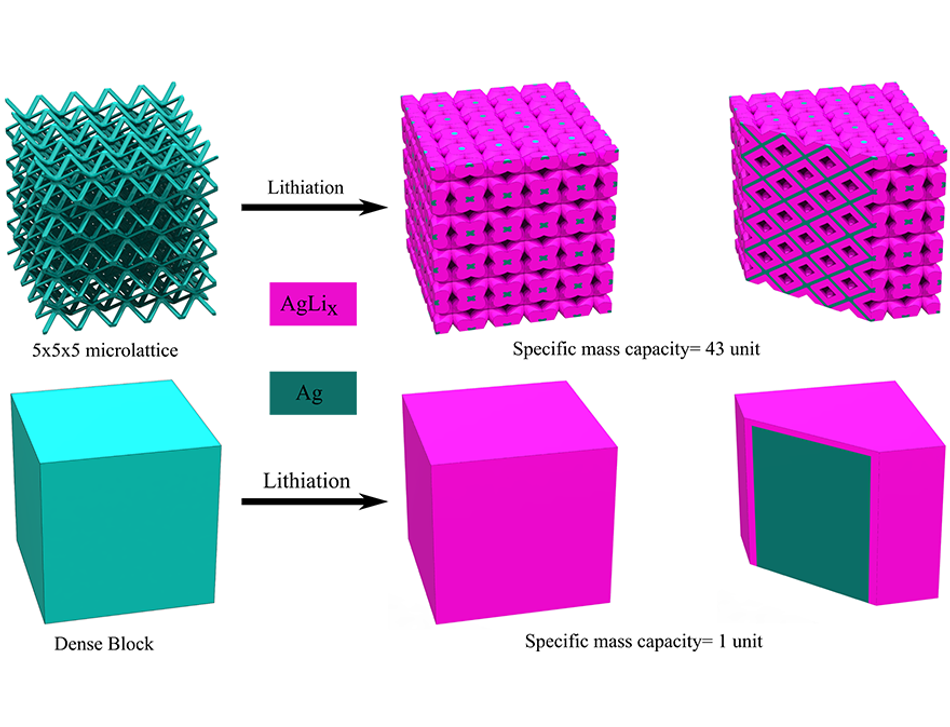 Lattice architecture can provide channels for effective transportation of electrolyte inside the volume of material, while for the cube electrode, most of the material will not be exposed to the electrolyte.

Rahul Panat, an associate professor of mechanical engineering at Carnegie Mellon University, and a team of researchers from Carnegie Mellon in collaboration with Jonghyun Park, assistant professor of mechanical and aerospace engineering at Missouri S&T have developed a revolutionary new method of 3D printing battery electrodes that creates a 3D microlattice structure with controlled porosity. 3D printing this microlattice structure, the researchers show in a paper published in the journal Additive Manufacturing, vastly improves the capacity and charge-discharge rates for lithium-ion batteries.

“In the case of lithium-ion batteries, the electrodes with porous architectures can lead to higher charge capacities,” says Panat. “This is because such architectures allow the lithium to penetrate through the electrode volume leading to very high electrode utilization, and thereby higher energy storage capacity. In normal batteries, 30-50% of the total electrode volume is unutilized. Our method overcomes this issue by using 3D printing where we create a microlattice electrode architecture that allows the efficient transport of lithium through the entire electrode, which also increases the battery charging rates.”

The additive manufacturing method presented in Panat and Park’s paper represents a major advance in printing complex geometries for 3D battery architectures, as well as an important step toward geometrically optimizing 3D configurations for electrochemical energy storage. The researchers estimate that this technology will be ready to translate to industrial applications in about two to three years.

The microlattice structure (Ag) used as lithium-ion batteries’ electrodes was shown to improve battery performance in several ways such as a fourfold increase in specific capacity and a twofold increase in areal capacity when compared to a solid block (Ag) electrode. Furthermore, the electrodes retained their complex 3D lattice structures after forty electrochemical cycles demonstrating their mechanical robustness. The batteries can thus have high capacity for the same weight or alternately, for the same capacity, a vastly reduced weight, which is an important attribute for transportation applications. 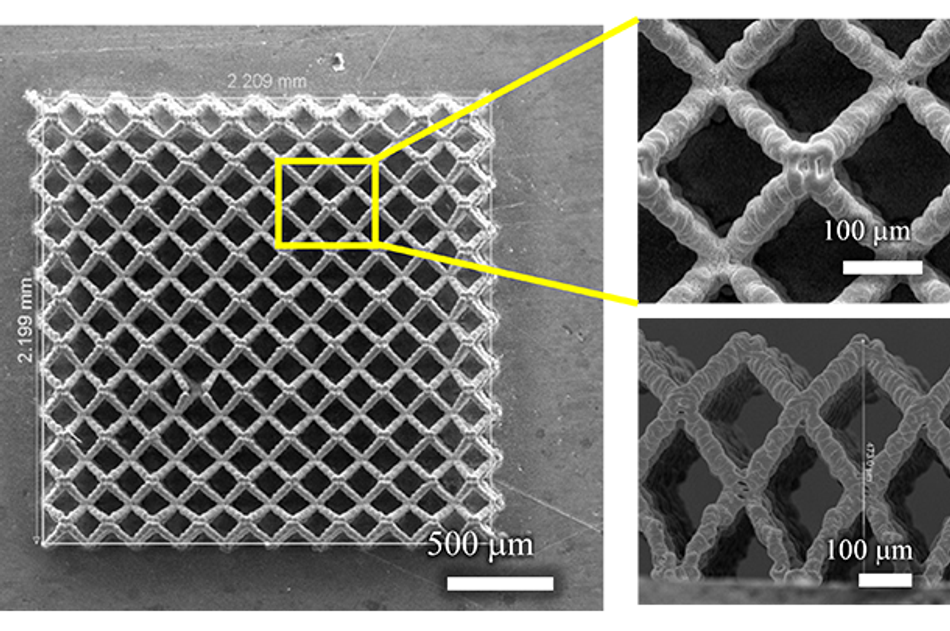 SEM images of 3D printed electrodes for Li-ion batteries used for electrochemical cycling in the researchers’ study. Image taken from top of microlattice electrodes with height of about 250mm.

The Carnegie Mellon researchers developed their own 3D printing method to create the porous microlattice architectures while leveraging the existing capabilities of an Aerosol Jet 3D printing system. The Aerosol Jet system also allows the researchers to print planar sensors and other electronics on a micro-scale, which was deployed at Carnegie Mellon University’s College of Engineering earlier this year. This novel 3-D printing method could be applied to battery technology with a collaboration with the Missouri university, where researchers developed 3-D battery design and analysis, cell fabrication technology, and electrochemical analysis via simulation and modeling.

Until now, 3D printed battery efforts were limited to extrusion-based printing, where a wire of material is extruded from a nozzle, creating continuous structures. Interdigitated structures were possible using this method. With the method developed in Panat’s lab, the researchers are able to 3D print the battery electrodes by rapidly assembling individual droplets one-by-one into three-dimensional structures. The resulting structures have complex geometries impossible to fabricate using typical extrusion methods.

“Because these droplets are separated from each other, we can create these new complex geometries,” says Panat. “If this was a single stream of material, as in the case of extrusion printing, we wouldn’t be able to make them. This is a new thing. I don’t believe anybody until now has used 3D printing to create these kinds of complex structures.”

This revolutionary method will be very important for consumer electronics, the medical devices industry, as well as aerospace applications. This research will integrate well with the biomedical electronic devices, where miniaturized batteries are required. Non-biological electronic micro-devices will also benefit from this work. And on a bigger scale, electronic devices, small drones, and aerospace applications themselves can use this technology as well, due to the low weight and high capacity of the batteries printed using this method.