In order to operate wind turbines more efficiently in the future and also to be able to use them in locations that are less wind-intensive, even larger and at the same time lighter blades are needed.

Rotor blades are one of the most important components of a wind turbine. They can be up to 70 metres long and weigh between 15 and 20 tonnes. In order to operate wind turbines more efficiently in the future and also to be able to use them in locations that are less wind-intensive, even larger and at the same time lighter blades are needed. The German Aerospace Center (Deutsches Zentrum für Luft- und Raumfahrt; DLR) is working with partners from research and industry to find out how this can be achieved and what technical challenges are involved. 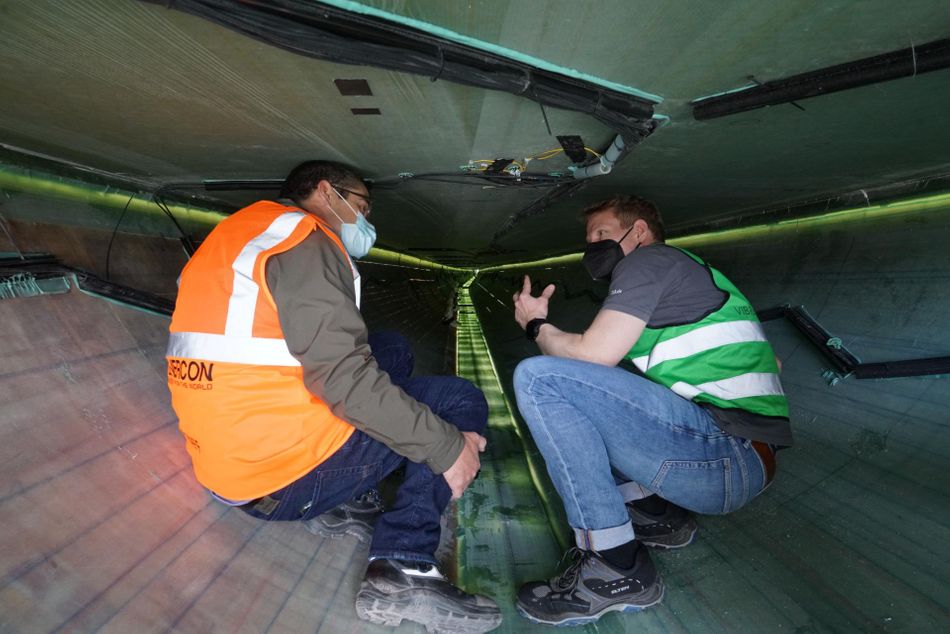 Science at full scale in the Wind Energy Research Farm

DLR's WiValdi (Wind Validation) Wind Energy Research Farm in Krummendeich, which is currently under construction, will offer a unique opportunity to do this. Over several weeks in March and April 2022, researchers from the DLR Institute of Aeroelasticity and the DLR Institute of Composite Structures and Adaptive Systems supported the production of six rotor blades for two wind turbines at the research farm. This was done in cooperation with Leibniz University Hannover, which is part of the ForWind Center for Wind Energy Research. In the Portuguese factory of the industrial partner Enercon, the 30-member team equipped the rotor blades with approximately 1500 sensors, making available state-of-the-art measurement technology from the blade tip to the blade root. This is the first time that vibration and load behaviour, as well as the aerodynamics and statics of a wind turbine, can comprehensively be investigated on a full-size device and during actual operation. 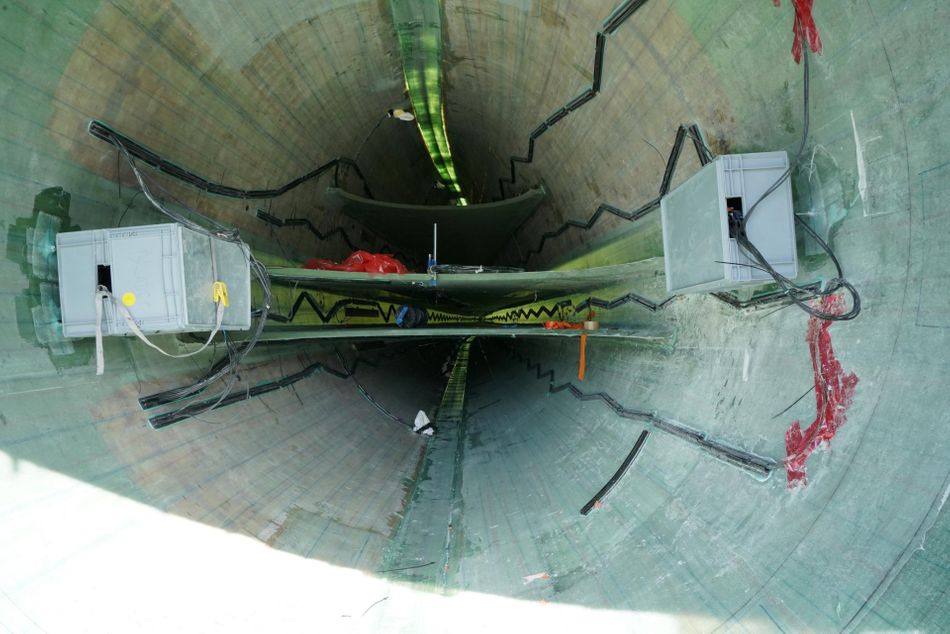 Collecting information – sensors as the 'nervous system' of the rotor blades

"If you have large and lightweight blades, they become very elastic and flexible. They deflect under wind load. This presents new technical challenges that need to be closely investigated," explains Yves Govers from the DLR Institute of Aeroelastics and leader of the instrumentation work package. The rotor blades of two of the wind turbines at the research farm are 57 metres long and can deflect by several metres.

"You can think of the sensors as being like the human nervous system. They collect information, monitor and provide indications of where a problem might arise," illustrates Govers. Electrical and optical sensors are installed inside the rotor blades. They measure, for example, the acceleration at different points on the blades and thus enable statements to be made about the vibration behaviour. Fibre-optic strain sensors that work with laser technology record the loads acting on the materials. A network of piezoelectric transducers receives and transmits ultrasonic signals and can directly detect damage developing in the rotor blades. Other cameras in the vicinity of the wind turbines measure changes in the rotor blades from the outside. As a reference for their measurements, a pattern of dots is painted on several sections of the blades.

If the blades become longer and longer and the turbines larger, new effects arise. For example, vibrations of the rotor blades can amplify each other and influence the stability of the turbine. "Until now, it has been almost impossible to record the vibration behaviour and thus also the material stress during operation. With our comprehensive sensor technology we will be able to collect valuable data and further improve the simulations. This knowledge will help research and industry to make more accurate predictions and to build even lighter and more stable turbines," Govers explains. Today, rotor blades already combine lightweight construction with stability. They consist of two shells glued together, which are largely hollow on the inside and connected with ribs. Sandwich materials are used; these have a top and bottom layer of high-tech plastics reinforced with glass fibres, with plastic foam or very light balsa wood in between. 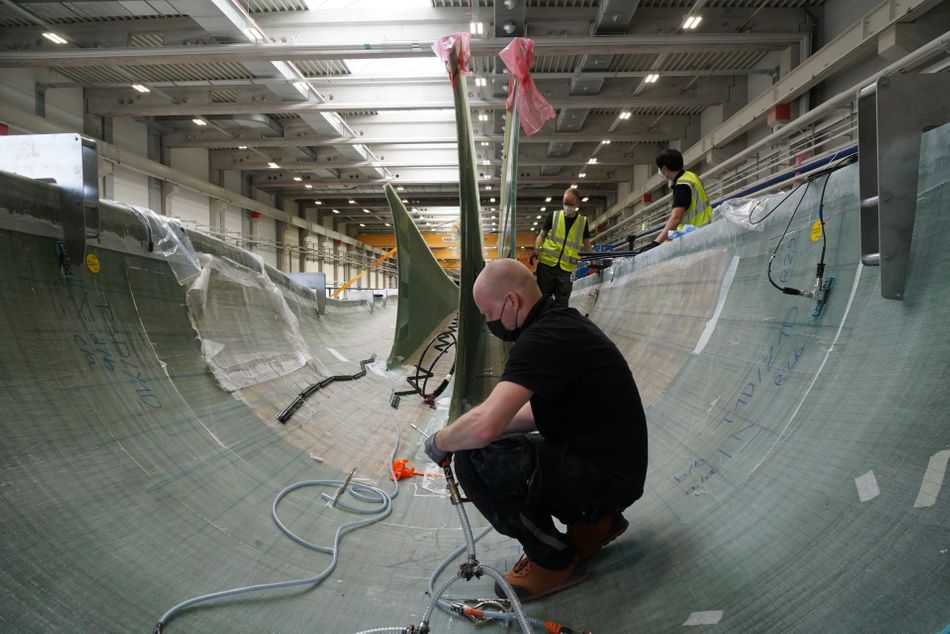 Working in one half of a turbine blade. Credit: Enercon

Under load, rotor blades not only bend but also twist. The sensors inside the blades also record this. These data can help to develop new approaches for controlling wind turbines in order to operate them more efficiently and for longer. To this end, DLR is working on concepts for load-adaptive control of turbines. If a gust occurs, special motors at the root of the blade turn the rotor blade out of the wind. They thus reduce the angle at which the wind hits the blade and reduce the load. In conjunction with sensors in the vicinity of the wind turbines, this should make it possible to react flexibly and at very short notice to local weather conditions on site.

Two wind turbines one behind the other – as in the DLR research farm – are also a challenge for control technologies. Yves Govers explains the reason: "The second turbine is in the wake of the first. That means it receives the turbulent air from the first turbine. That is why we want to find out how the second turbine has to be controlled so that it still produces as much electricity as possible and can be operated in a material-friendly way." Here, too, the researchers are relying on the large amount of data from the many sensors. The demand for such new control concepts is high. Even today, wind farms, some of which have over a hundred turbines, are so closely arranged that the turbines all affect one another. 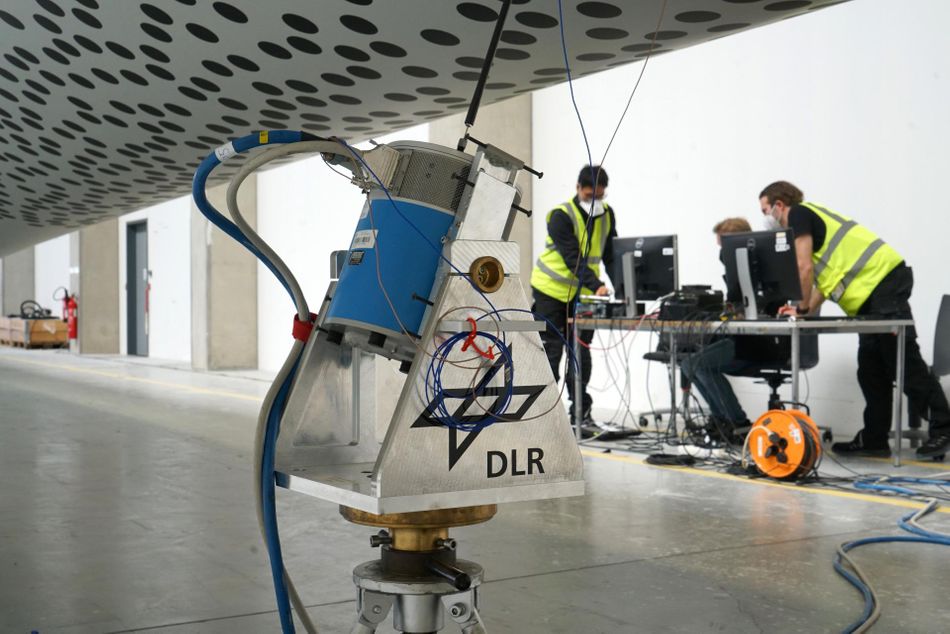 Flexing and oscillating – intensive tests before practical use

After their journey by ship from Portugal to Germany in mid-May 2022, the six rotor blades have one more stop to make. Before they are assembled at the research farm in Krummendeich, they will make a stopover in Bremerhaven for two months. At the Fraunhofer Institute for Wind Energy Systems (IWES), they will be subjected to intensive trials on test stands. To do this, the team will suspend the rotor blades on a crane with elastic cables and set them vibrating. This is primarily to set up and test the many sensors. In a second major test, the researchers will mount the blades on a test rig and subject them to pulling tests to measure statics, deformation and internal stresses. After these tests are completed, the installation of the high-tech rotor blades is planned for autumn 2022.

The future of rail transport - Technologies for tomorrow

A high-tech chassis for the train of the future