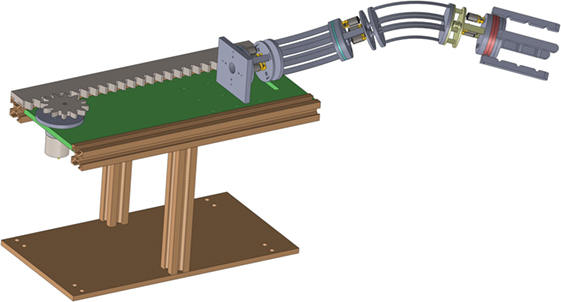 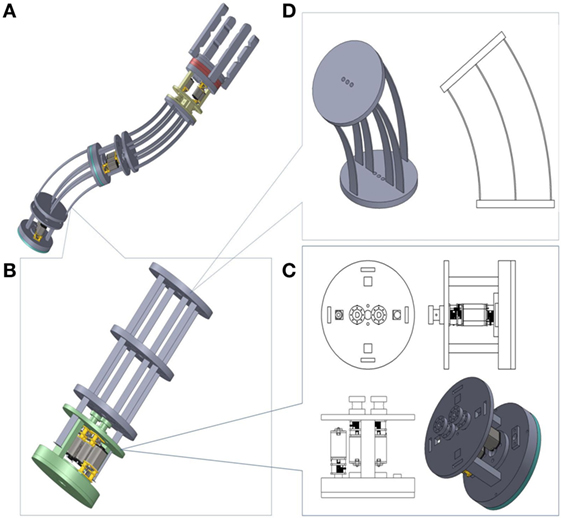 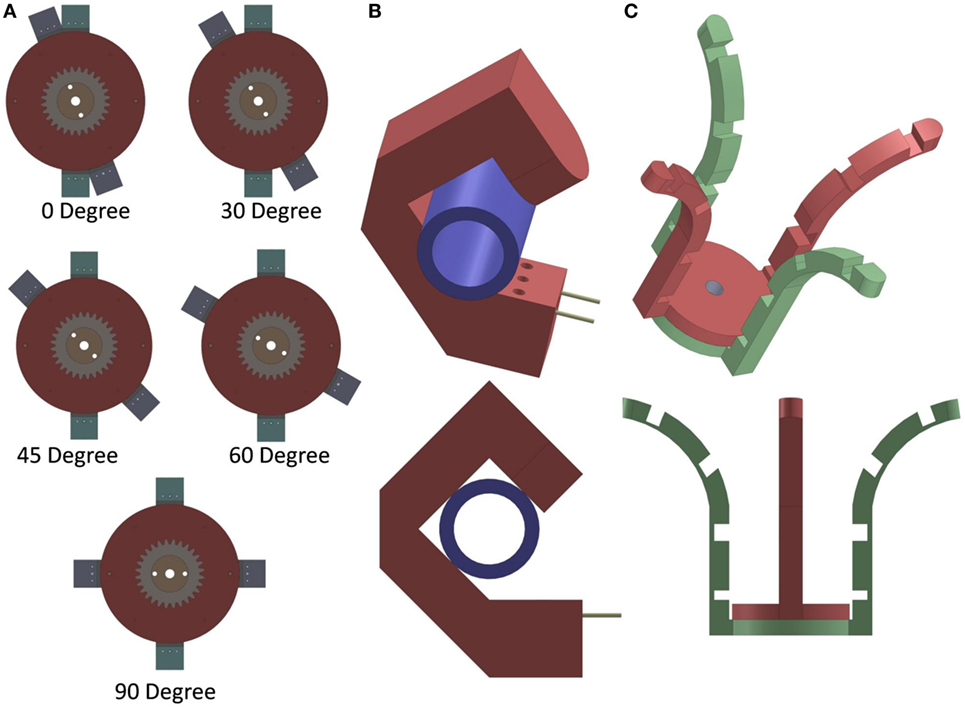 Some reconfigurable positions of the fingers; (B) bending and grasping capability of the fingers; (C) “spider-like” configuration for enlarging the spectrum of objects size that can be grasped. 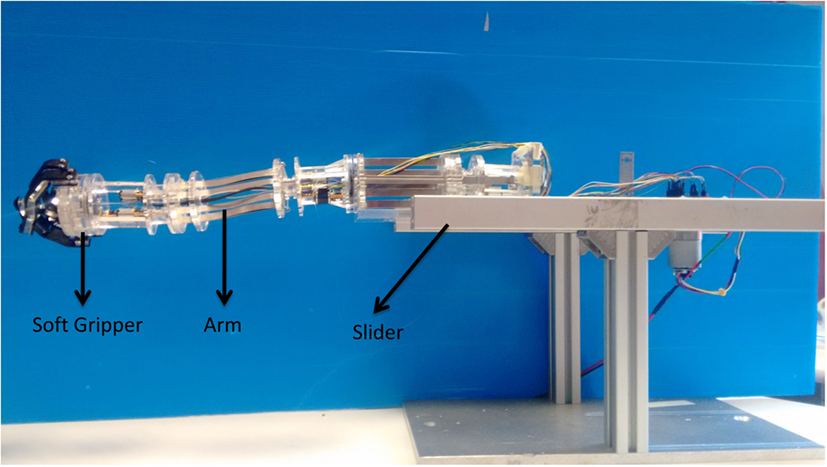 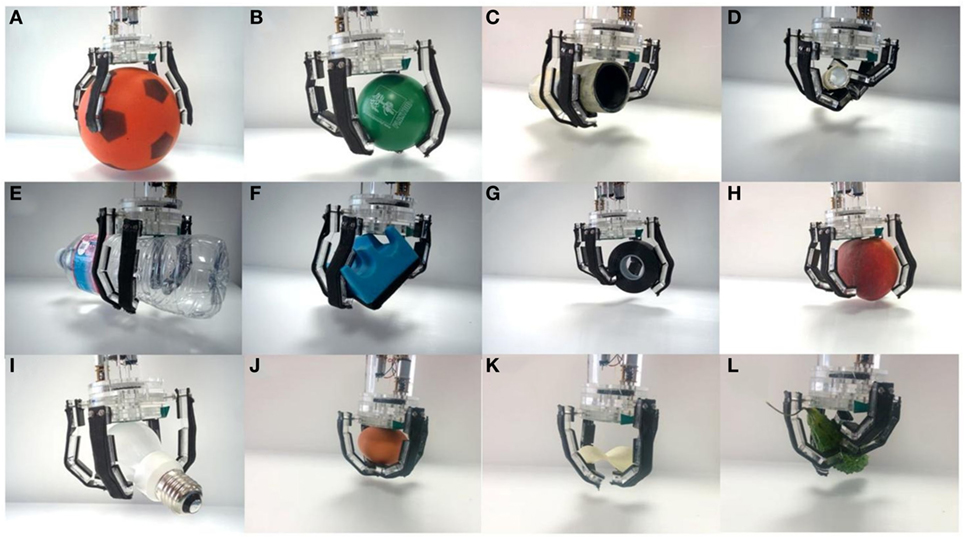 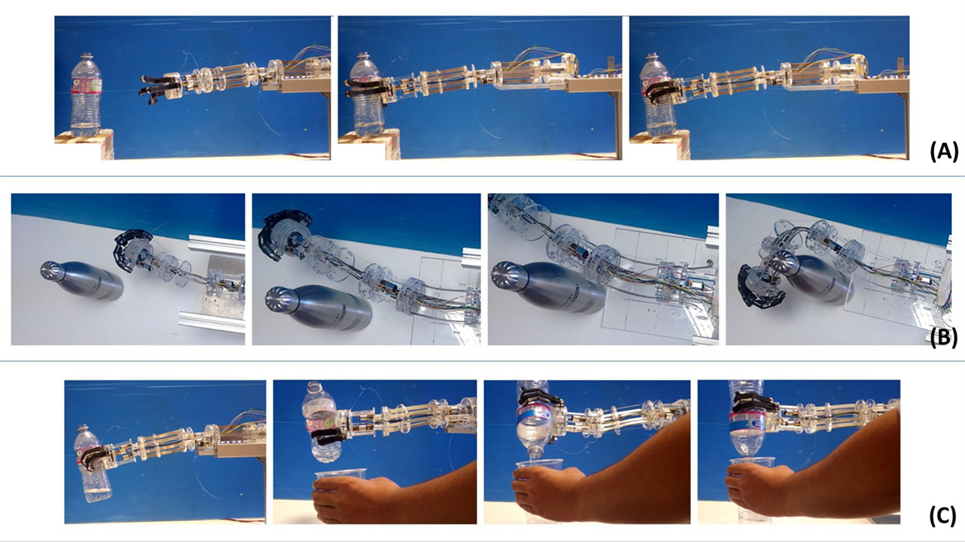 The modular continuum arm has independent actuation units for each module, to increase maintainability, a soft reconfigurable hand, for a better adaptation of the fingers to objects of different shapes and size, and a moving base for increasing the workspace.

The SIMBA (Soft Compliant Manipulator for Broad Applications) manipulator can grasp and manipulate by grasping objects with different fragility, geometry, and size up to 2 kg.

Arm and gripper are tendon-driven mechanisms actuated by DC gear motors, and both these robot components incorporate reconfigurability in their design, a feature that improves grasping and manipulation in unstructured environments.

The continuum arm is made of two modules each of which is divided into two units:

Each arm module can bend independently from the other, from −90° to +90°, and rotate respect to the central axes, covering all three dimensional workspace. This allows the assembled arm to reach a maximum bending of 180° in plane.

The bending unit has a central support of four soft flat springs and two lateral supports composed of a soft flat spring, which allows full bending in the plane and blocking the movement in the perpendicular direction. The soft flat springs have the ability to sustain the bending in one direction providing high stiffness on the opposite side and avoiding the buckling of the module. The bending is actuated by a tendon-driven mechanism: a tendon passes through three disks composing the module arm (one tendon on left and one on the right of each module) for the whole length of the module, rolled around the pulley which is connected to the DC gear motor and pulled or released according to the motor movement. Each tendon of the module is actuated by its own motor (over actuated mechanism).

The gripper consists of four soft fingers connected to a reconfiguration mechanism and an independent actuation module. The actuation module embeds the actuators for the opening and closing of the fingers and fingers relative rotation. he fingers of the gripper are connected two-by-two, to two circular plates, at 180° each other. The two disks can rotate relatively through a simple gear train mechanism actuated by a DC gear motor, in order to reconfigure the position of the fingers and consequently the orientation of grasping points.

The grasping is actuated by a tendon-driven mechanism, similar to the arm module bending mechanism. Two DC gear motors are used for pulling the fingers wires (one motor each pair of fingers). The fingers have been designed taking inspiration by human fingers: each finger consists of three phalanges made of an artificial bone (a rigid structure) and connected by tendons, reinforced rubber and elastic waistband. Each finger has indeed three soft joints which can bend in one direction by pulling the tendon and come back passively thanks to the elastic property of rubber and waistband. The soft materials are coupled with a rigid structure to provide the stiffness needed for gripping. By releasing the tendons, it is also possible to configure a particular “spider-like” position, where the fingers are overturned outwards, increasing the ability of gripping with relatively big objects.

The rotation of the modules is supplied by DC gear-motors and a gear train mechanism (two spur gears pinion and gear, with gear ratio of 1:2.8). The motors used for actuation are Polulu 986.41:1 micro metal gear motors which provide 9 kg cm torque, 32 RPM at 12 V. The all components have been fabricated by CO2 Laser cutting machine and assembled with the classical fastening techniques. For the gripper, we used the same fabrication technique and materials but introducing also reinforced rubber and elastic waistband for passive actuation. The detailed description of the design is explained in above section.

The components used for the fabrication of the slider are DC motor providing 12.24 kg cm torque and 50 RPM at 12 V, commercial aluminum profiles with slotted bars, rack gear 50:1 with 37 mm × 70 mm fixed on aluminum profile, pinion gear, and a moving plate made of Plexiglass.

The hardware components of the manipulator are controlled by a customized board embedding a microcontroller (PIC32MX150F128B from Microchip Inc.), 8 motor drivers (LV8548MC from ON Semiconductor) for driving the 10 motors of the manipulator, and a Bluetooth4 module (RN42 from Microchip Inc.) for the remote communication with the control user interface.

Describe the conceptual design and implementation of the Soft Compliant Manipulator for Broad Applications (SIMBA) manipulator.