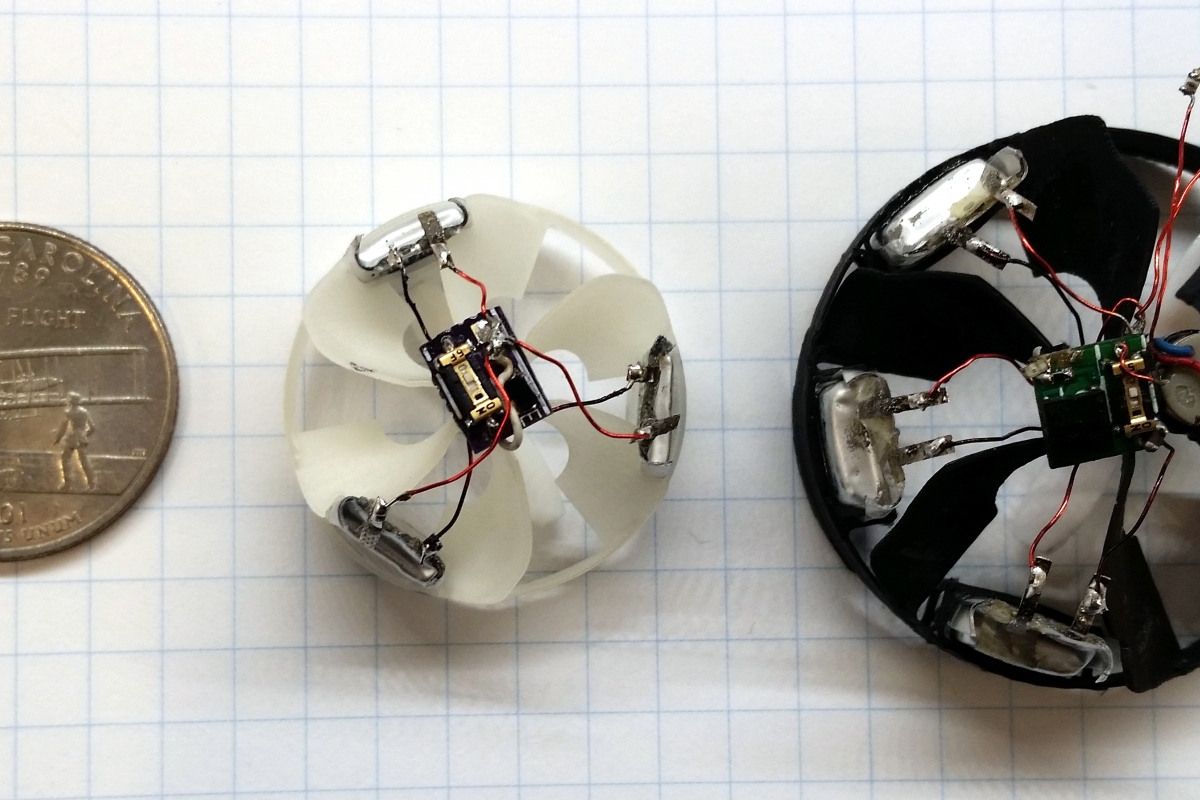 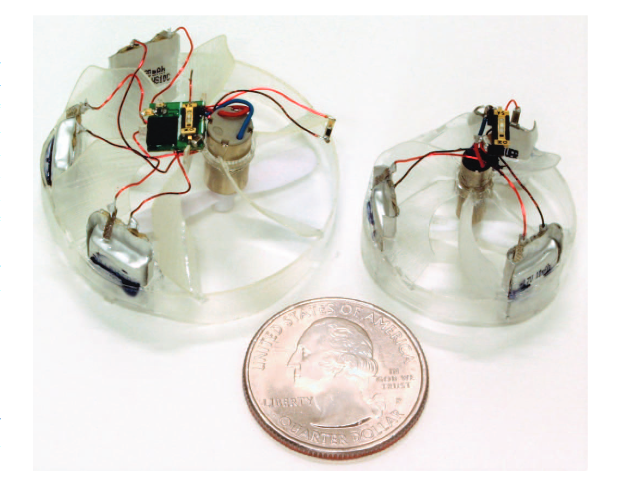 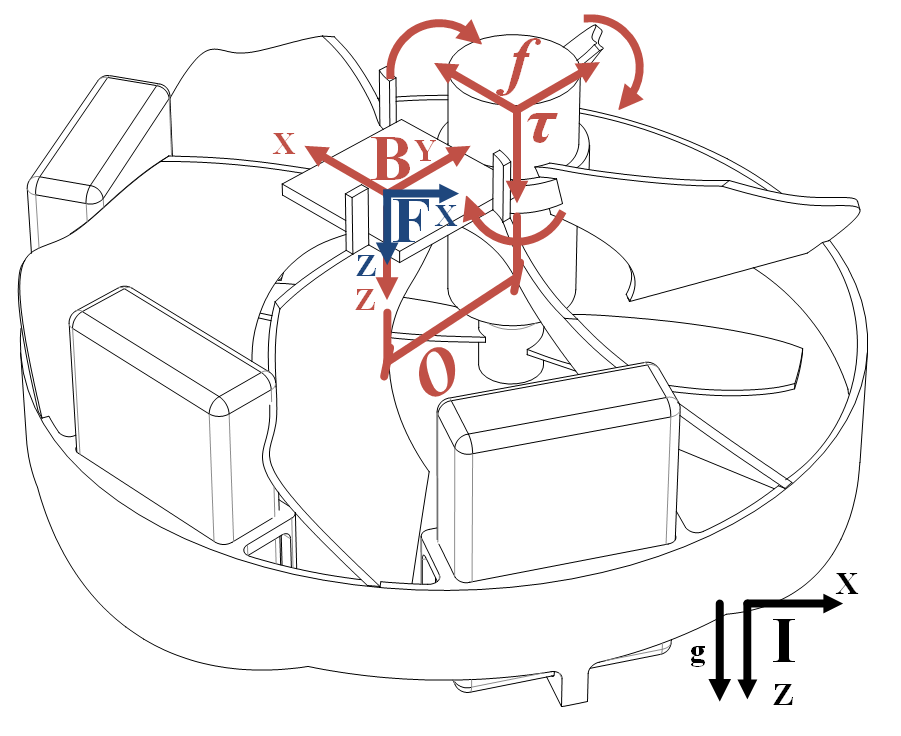 Coordinate systems: I for inertial, F for flyer, B for body. F and B are located at COM. The forces and torques generated by the motor and propeller are fand τ. 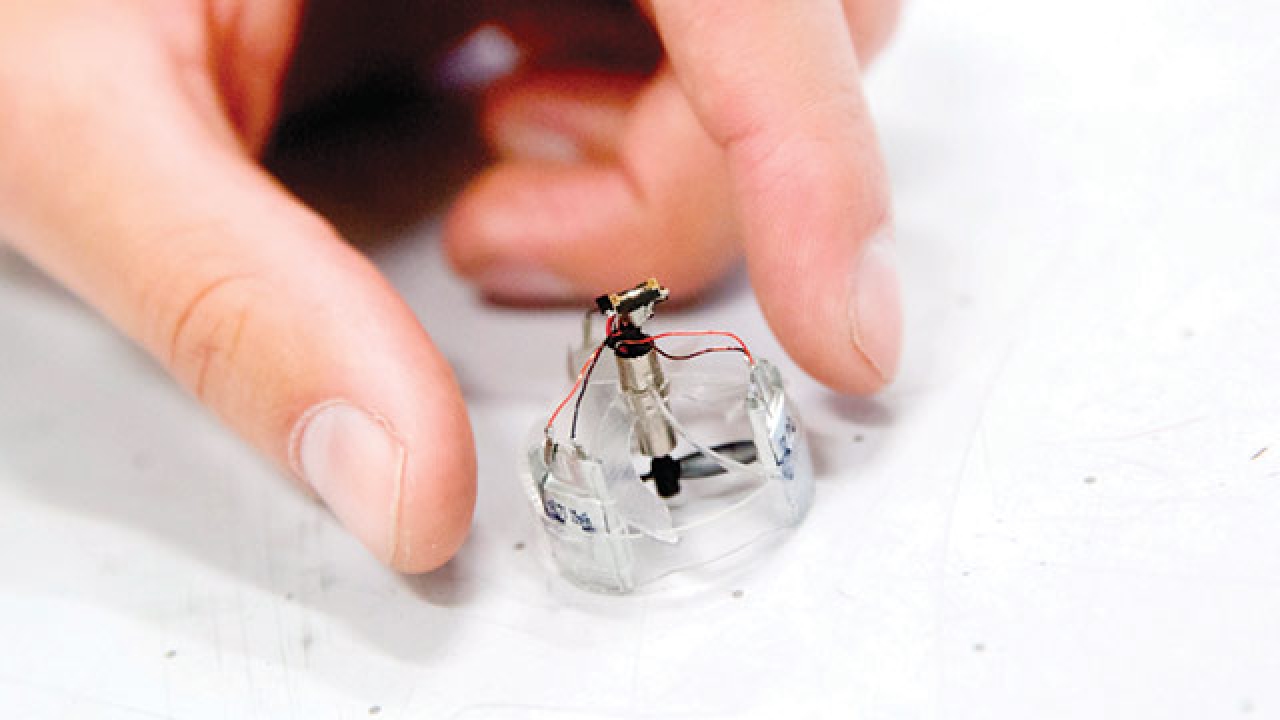 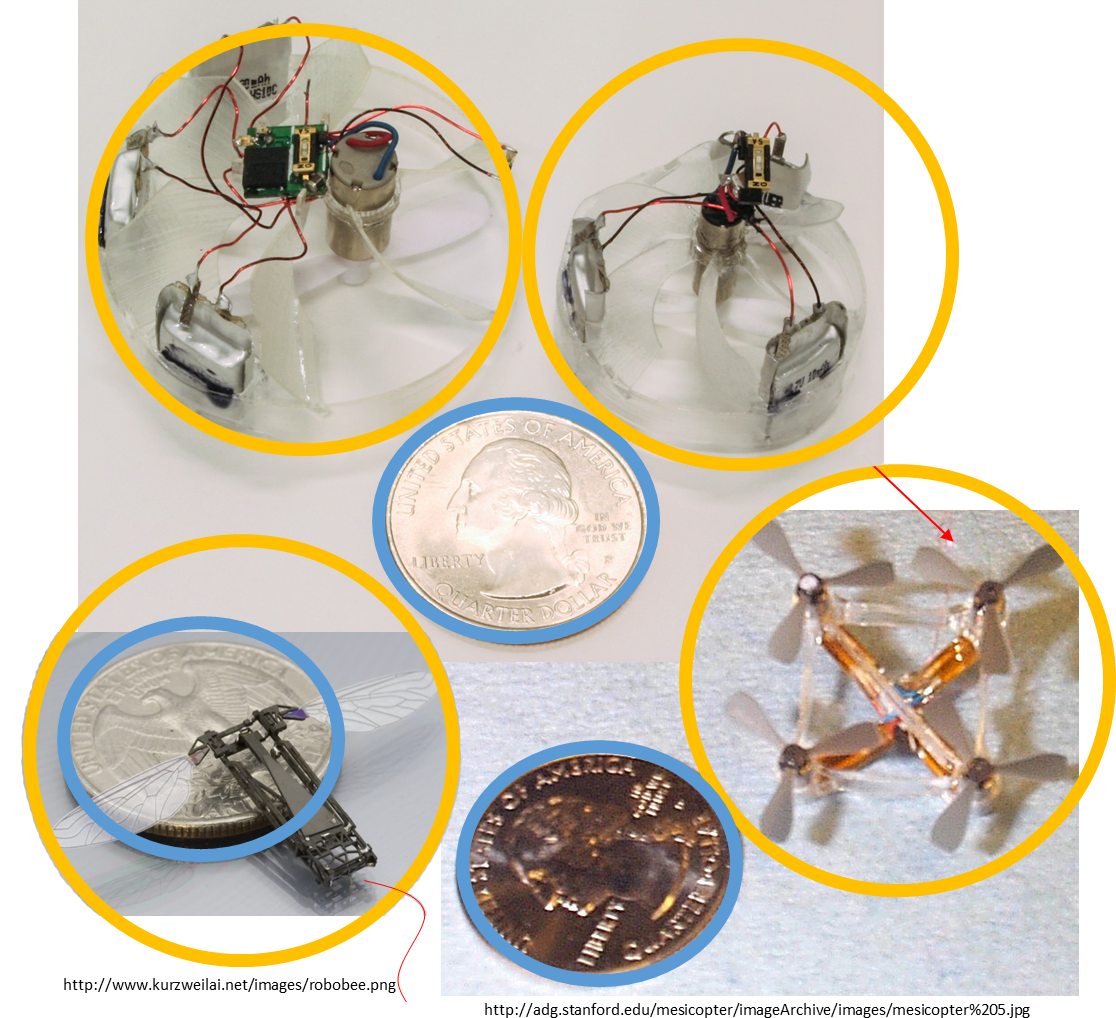 Piccolissimo has only two rigid bodies: the vehicle body and the propeller. The vehicle body holds the control electronics, batteries, and also has lifting airfoils. These lifting surfaces produce a counter torque against the propeller, as well as create a large amount of differential lift. This differential lift and mass distribution are critical components inthe vehicle’s passive stability. To maximize the passive stability, the batteries are arranged around the outer most extremes, maximizing the body’s moment of inertia.

Piccolissimo is designed to be small, robust, and low cost. Its single moving part, the motor rotor with an attached propeller, is taken from small, commercial multicopters. Power comes from commercially available Lithium Polymer batteries. Many 3D printers are capable of printing thev ehicle bodies and 3D printing services have success fully printed bodies for $7.37 USD. There are no inherent design features that would prevent injection molding. The batteries are located along the the body’s outer most rim in order to increase the body’s moment of inertia. Because no single battery of appropriate dimensions and power exists at the time of development, the rim is surrounded with at least three discrete batteries in order to distribute the moment ofinertia in the "x" and "y" directions. The three batteries are wiredin parallel (1S3P) to keep both the onboard electronics andthe motor at a safe voltage.

A thin solid rim attached to the body surrounds the vehicle to increase the moment of inertia, protect the vehicle in case of a collision, and reduce differential lift on the main propeller (a destabilizing effect). The body’s airfoils are large and with a high disc solidity to increase the differential lift effect for passive stabilization. Nearly every feature on the body is 0.4 mm thick.

Piccolissimo’s passive stability allows it to do away with the actuators for attitude control, leaving just a single motor for throttle. With this, spare parts are used from the current smallest, commercial quadcopter to produce a vehicle with a maximum dimension that is roughly one quarter the planformarea. The motor and propeller come from a Cheerson CX-STARS quadcopter. The control electronics are minimal. The motor is driven by a DMN3065LW-13 N-Channel MOSFET whose gate is pulled up by a TEMT7 100X01 infrared photo transistorand pulled down by a resistor. An infrared flashlight ispulsed (PWM) above the vehicle, which in turn modulates the on time of the motor driving MOSFET. A CVS-01TB miniature slide switch is in series with the phototransistor.

Where Mini Piccolissimo is optimized for size and stability, Maneuverable Piccolissimo is intentionally partially imbalanced. We offset the propeller’s location so that the thrust no longer goes through the vehicle’s center. The batteries are skewed in the opposite direction to further increase the disparity between the COM and the thrust vector. An Atmega ATTiny20 microcontroller PWMs the motor synchronously using a SiA519EDJ N- and P-Channel MOSFET.

It receives commands from the pilot via an upwards facing TSOP57436 remote control infrared receiver. A user controls a transmitter to project an infrared control signal onto the ceiling, which reflects back down onto the remote control receiver. A TEMT7100X01 infrared phototransistor faces the vehicle body’s "x" direction and is pulled down by a 200 kΩ resistor. The infrared phototransistor spins with the vehicle body. The microcontroller reads the voltage from this sensor and searches for peaks to run a phase-locked loop. The maximum infrared source within view will point to a direction called inertial "x". We have used both infrared LEDs and the sun via windows as infrared sources. The phase-locked loop estimates the vehicle’s angle within one revolution. Maneuverable Piccolissimo indicates it has lock on the infrared source by turning off it’s green LED on the PCB and turning on its red LED on the PCB. To visualize and debug its behavior, another red LED is located at the rim and on the "y" axis. This LED is on the same side of Piccolissimo as the motor and propeller (which is offset from the COM), and is connected to the motor’s leads. Thus, using persistence of vision, we can see when the controller is applying voltage to the motor during pulsing. For this reason, we call this LED the motor visualization LED.

Provides detailed description of the Piccolissimo project; its goal, requirements, and design approach.