The chain-type structure of KAIRO 3 was biologically inspired by inchworms or snakes. KAIRO 3 is a heterogeneous modular robot, because it consists of two fundamentally different types of modules: drive modules and joint modules.

The drive modules are used for wheeled locomotion. They are equipped with two mounting interfaces for connecting the joint modules at opposite ends. Each joint module consists of three active joints which are arranged at a 45-degree angle relative to each other. These active joints are driven by special harmonic drive gears designed to pass sufficient power to the joints. All joint angles are measured with optical encoders giving both absolute and incremental values.

A typical configuration of KAIRO 3 consists of six drive modules which are interleaved with five joint modules. A single drive module weighs 4.5 kg and is 146 mm long. The corresponding values for the joint module are 4 kg and 184 mm.

Due to the many degrees of freedom this type of robot system is also called hyper-redundant. KAIRO 3 is classified as an active system because every single DOF is driven by a motor. All actuators and control units are integrated inside the modules in such a compact way that it is easily possible to add several sensors, or even to transport objects inside of the drive modules.

The hierarchical control software is implemented using the robotic framework MCA2 (Modular Controller Architecture) and consists of three main parts: Base Control, Motion Execution and Manoeuvre Control. On the lowest level, the decentralized Base Control is located in every module of the robot to control the motors and to read in sensor values. These low-level control algorithms run on a specialized hardware module which is called UCoM (Universal Controller Module). This custom-made circuit board consists of a DSP and an FPGA. In addition to the motor control it also has an integrated component for measuring motor currents. The communication between all UCoMs and the adaptive control is realized by a CAN BUS. 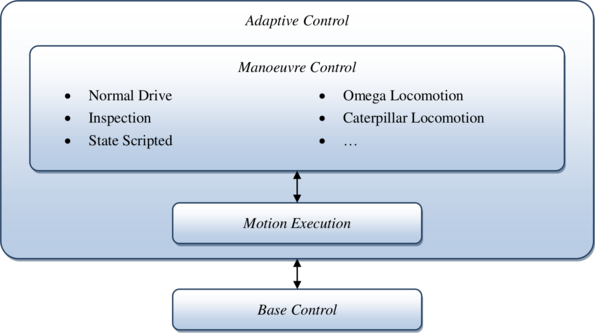 In contrast to the decentralized Base Control, the Adaptive Control is executed on a centralized control computer and transmits the coordinating control commands via CAN BUS to every module. Controlling the overall robot system, the Adaptive Control itself consists of Manoeuvre Control and Motion Execution which adapts to the varying amount of modules. The Motion Execution processes the sensor data input and calculates the desired joint angles using the overall robot kinematics. At the top level the Manoeuvre Control plans the motion of the robot using a virtual rail. There is an initial set of elementary manoeuvres defined to achieve basic movements like Normal Drive or Inspection with KAIRO 3. Furthermore, two biologically-inspired locomotion manoeuvres have been implemented, which are called Omega and Caterpillar Locomotion. Every manoeuvre is implemented as a collection of states inside a hierarchical finite state machine.

Self-assembling, self-reconfiguring cubic robots that use an internal flywheel and pivoting motions to change their overall geometry. The robots are cubes with no external moving parts. Nonetheless, ...

SEADOVE is a torpedo-shaped Autonomous Underwater Vehicle used for testing the concept of a novel emergency locator system. SEADOVE can navigate autonomously using GPS. SEADOVE is designed to prove t...

Koala is a mid-size modular robot designed for real-world applications.

Describes the modular robot and its architecture. Goes into the navigation system, and implementation of motion planning and control. Describes evaluation, tests, and the conclusion.

Some organisms cover distance by growing. Now a robot can, too.

​A newly developed vine-like robot can grow across long distances without moving its whole body. It could prove useful in search-and-rescue operations and medical applications.

An autonomous catamaran to remove floating plastic debris in ports and harbors. The WasteShark is an aquadrone that removes plastics and other floating debris from the water surface. It was designed ...

A robot that handles objects, climbs stairs, and operates in offices, homes, and outdoors.