TheTeredo IceShuttle is a robotic probe which is capable to transport a payload through an ice-shield towards an environment located beneath the ice. The System is developed in context of the project Europa-Explorer. For that project, a set of robots are developed to model the exploration of the hypothesized ocean on  Jupiters icy moon Europa by an analog mission on earth. Within the scenario the IceShuttle transports an autonomous underwater vehicle (AUV) as its payload. (image below) 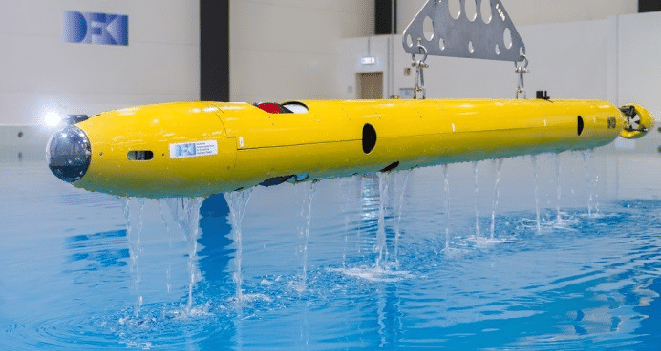 The main tasks of the system is to melt a way down through the ice, overcome possible obstacles,
transport the AUV and deploy the payload safely into the water body to explore. The propulsion through the ice is generated by a thermal drill. Besides transportation the IceShuttle functions as a stationary base station. It provides a docking interface as well as a set of additional sensors to support the AUV’s navigation. Due to the given requirements and the necessity to carry the AUV within the IceShuttle the two systems and their design are highly integrated and adjusted towards each other.

The basis of the IceShuttle is an existing cryobot system, which is designed for research on glaciers. This system drills into the depth of the ice and carries a scientific payload to do simple in-situ measurements, but not leaves the ice.

The thermal drilling mechanism is located at the tip of the IceShuttle. It is designed as part of a pressure-housing described as “ice-melting module”, while the module contains the electronics for the thermal control of the tip as well as mechatronic components for the unfolding mechanism. The subsequent part of the vehicle is the “sensor module”, which contains a set of sensors to support the navigation of the exploration vehicle from a fixed position under the ice. The sensors need to be fully
deployed into the water to be functional therefor the sensor module is simply divided into a “wet” and “dry” part.
The wet part mostly contains the sensors including the mechanical part of its deployment system as well as a part of the ice shuttle’s electrical and communication backbone, the dry pressure-housing contains electromechanics and control for the sensor deployment and the general unfolding mechanism as well as electronics for the navigation sensors and other peripheral electronics.

The payload bay contains multiple different subsystems. It contains a set of freely deployable acoustic beacons for navigation (“Micro-Gliders”), a docking interface, a mechatronic system for launch & recovery (LARS) and the electric backbone of the system. The payload area has a wet/flooded compartment.

The rear end of the IceShuttle again consists of a pressure housing including further electronics, mechatronic components and space for an on-board computer.

IceShuttle Teredo: An Ice-Penetrating Robotic System to Transport an Exploration AUV into the Ocean of Jupiter's Moon Europa..

Describes the outlines of the project, the design, drilling technology, the AUV deployment strategym, experiments, discussions, and results.