Colias has a circular platform with a diameter of 4 cm, and a maximum speed of 35 cm/s which enables it to be used in swarm scenarios very quickly over large arenas. Long-range infrared modules with an adjustable output power allow the robot to communicate with its direct neighbours at a range of 0.5 cm to 2 m.

The robot has two boards – upper and lower – which have different functions. The upper board is for high-level tasks, such as inter-robot communication and user-programmed scenarios; however, the lower board is designed for low-level functions such as power management and motion control.

Two micro DC motors employing direct gears and two wheels with a diameter of 2.2 cm actuate Colias with a maximum speed of 35 cm/s. The rotational speed for each motor is controlled individually using a pulse-width modulation (PWM) technique. Each motor is driven separately by a H-bridge DC motor driver and consumes average power of 35 ± 5 mA in no-load conditions and up to 150 ± 20 mA in stall conditions. The robot uses the differential-driven configuration, which is a simple method to control a mobile robot using a very basic motion control principle. Since the motors are directly supplied by the battery of the robot, any changes in battery level will impact the speed of the robot.

As the employed motors' gearbox ratio is high (120:1) and the robot is lightweight (28 g), the robot does not need much torque (τm≅0τm≅0) to move. As a result, the acceleration of the motors is similar to the no-load condition and this causes the speed to settle within a few milliseconds.

The basic configuration of Colias uses only IR proximity sensors to avoid obstacles as well as collisions with other robots, and a light sensor to read the illuminance of the ambient light. The IR sensory system consists of two different types of IR module, namely, short-range sensors and long-range sensors. A combination of three short-range sensors and an independent processor grants the capacity for an individual process for obstacle detection which works in parallel with the rest of the system. A similar, although complex, mechanism has been found in locust vision, in which a specific neuron called the ‘lobula giant movement detector’ (LGMD) which reacts to objects approaching the insect's eyes.

The long-range system is composed of six IR proximity sensors (each 60 ∘∘ on the robot's upper board) for obstacle and robot detection. The IR sensing system is able to distinguish robots from obstacles. The range of the system is approximately 15 ± 1 cm with a radiant power of 6 mW/sr (adjustable up to 15 mW/sr).

The team evaluated the feasibility of Colias for use in collective swarm scenarios. In this regard, the state-of-the-art swarm aggregation algorithm (BEECLUST) is implemented with different population sizes. In general, after detecting an obstacle, a robot rotates and executes an obstacle avoidance routine.

Alternatively, if the robot detects another robot, it stops and measures the illuminance of the ambient light. It is worth mentioning that a neighbour robot can be detected at a distance of 2 cm, which is called an ‘inter-robot collision’. After each inter-robot collision, the robot waits. The duration spent waiting depends upon the measured illuminance. A higher light illuminance results in a longer stationary time. When the waiting time is over, the robot turns by a random degree and moves forward. 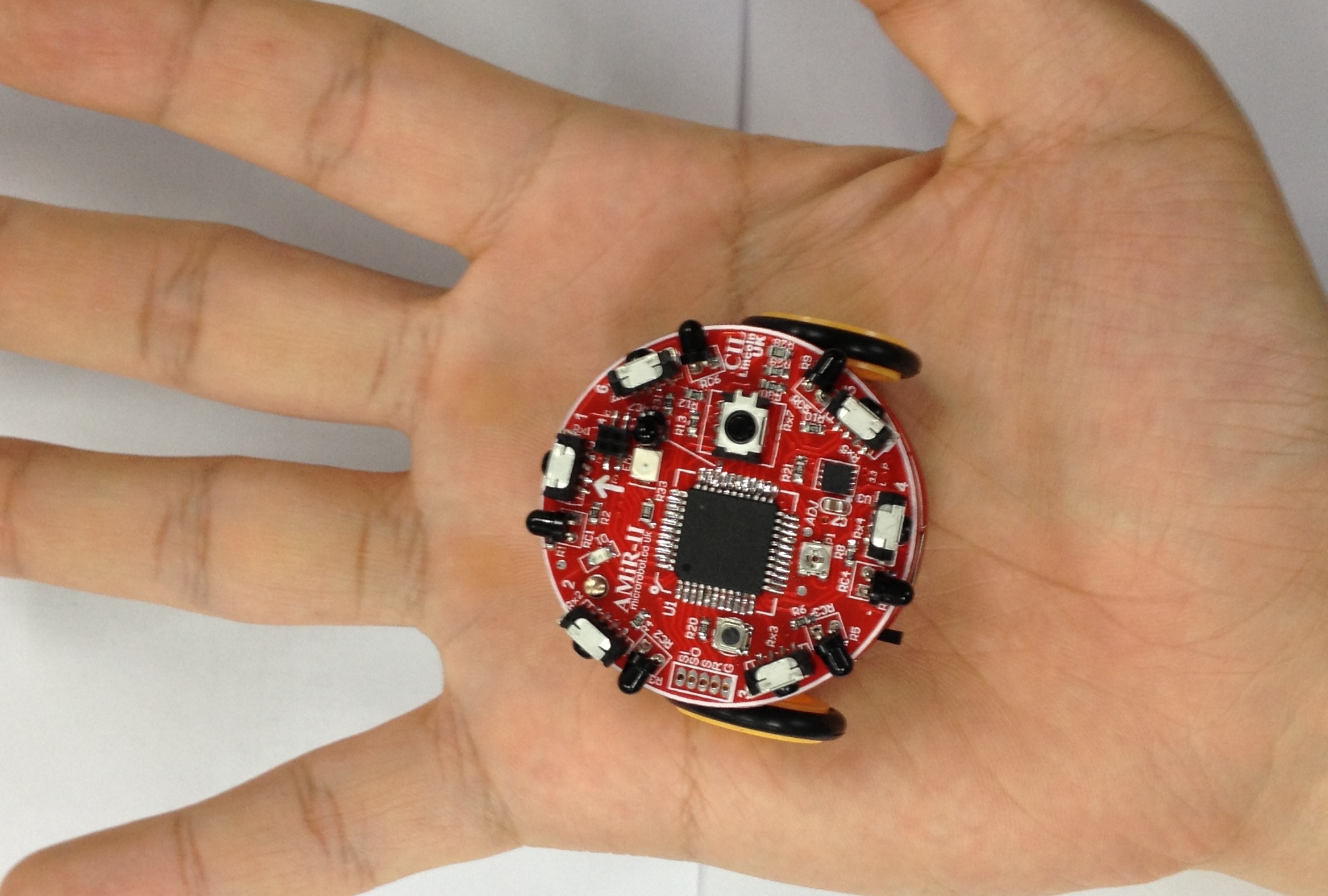 The GRITSBot is a wheeled differential-drive microrobot that resembles state-of-the-art platforms while closely replicating typical capabilities. The range of capabilities include wheeled locomotion,...

The MONA is a small, adaptable, cost-effective, robotic platform designed to be used within swarm robotics or taught engineering modules at University. Developed at the University of Manchester, it ca...

The MegaScout is designed to support a Scout robotic team as well as perform missions independently. Scout robots are small 40 mm×110 mm robots intended to function as an information gathering team in...

The lessons learned from building 1024 robots with Michael Rubenstein

Michael Rubenstein describes how he has taken his robotics research from theory into practice by building cheap and small robots, 1024 of them to be exact.

Thanks to software developed bicycle engineers can quickly calculate the most aerodynamic shape for a bike. The software applies artificial intelligence to a set of user-defined specifications. Engineers have used the program to design a bike that they hope will break the world speed record.

An autonomous catamaran to remove floating plastic debris in ports and harbors. The WasteShark is an aquadrone that removes plastics and other floating debris from the water surface. It was designed ...