The Capio exoskeleton is a human-machine interface that tracks the operator’s movements and transfers them to a target system. Multiple contact points at back and arms to the user enable a precise motion measurement and allow a specific force feedback. The combination of the kinematic configuration with 20 active serial elastic joints controlled by a rigid body dynamics algorithm provides mechanical transparency. The possibility to move the torso enhances the exoskeleton workspace. The Capio system is designed portable and lightweight with an easy dressing procedure

As main requirements for teleoperation it was identified that the exoskeleton should cover a large human workspace, be mechanical transparent, precisely measure the operators movement, be easy to dress and safe in usage.

The fulfilment of the requirements are explained in the following sections. A short overview about the Capio exoskeleton, shown in Figure 1, and its specifications is given in Table 1. Several serial and parallel kinematic setups for the subsystems back and arm were developed. The key point in the development was the human dual arm manipulation workspace. The combined result of several iterations is shown in Figure 2. To specify the kinematics, the Sheth-Uicker two-frame convention is used. This means, beginning from root, child links need to have an increasing index. 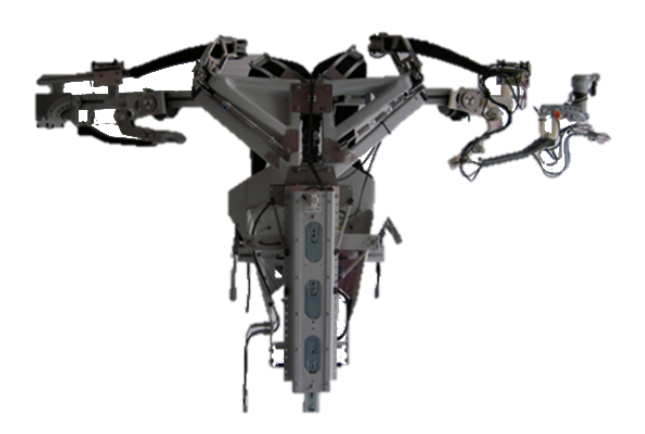 The joint enumeration represent this by including the start and end link number: link 2 is framed by joint 001-002 and joint 002-003. To test the functionality a passive exoskeleton was build up as displacement study as depicted in Figure 3. With the passive exoskeleton the joint angles can be measured and the corresponding velocities and accelerations can be calculated. The kinematic structure includes two contact points at the back and three contact points at each arm. Advantage arises from the close arrangement between exoskeleton and user which enables a precise measurement and force feedback but enhances the required performance of the control algorithms and the kinematic. 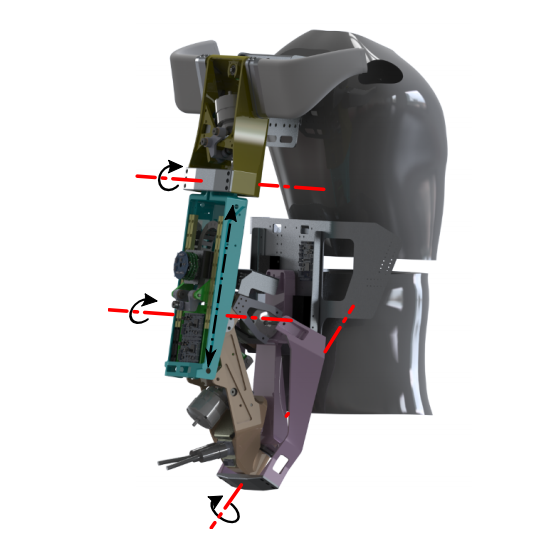 Four active degrees of freedom (DOF) realise the back movement with two adjustment possibilities, see Figure 4. The first joint allows the rotation of the back relative to the hip. The torso flexion and extension is achieved by the second joint in combination with a linear joint. The linear joint provides an extension of the structure, to compensate the larger movement radius of the structure. Eight active DOF are applied at each arm. Three drives represent the shoulder joint with a common intersection point. The elbow is simplified to a rotative joint in combination with a linear compensation joint. A passive joint connects the exoskeleton to the users upper arm.

To achieve an easy dressing procedure and improve the system’s handling, an ”OpenJoint” concept is developed, shown in Figure 5. The forearm pronation and supination is simplified to the longitudinal forearm axis. In this case a standard solution for an exoskeleton design is coaxial to this axis, often leading to a circular closed bearing design. In the ”OpenJoint” set-up, the joint actuation and measuring axis is not coaxial to the pronation and supination axis but intersects with this axis in one center of rotation. 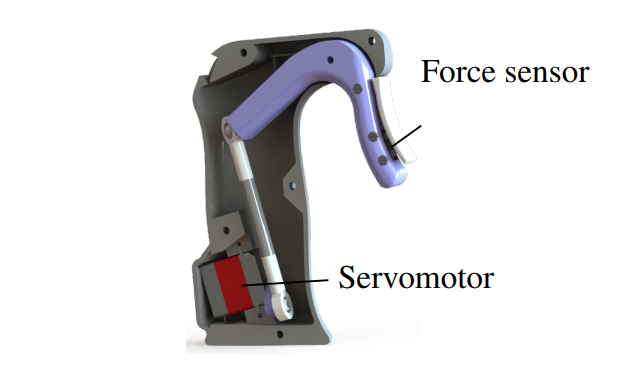 An exoskeleton that can be worn like a glove and can also be used to operate an external robotic arm. The exoskeletal hand has all the principal physiological degrees of freedom of its human counterp...

Huggable is a robotic companion capable of active relational and affective touch-based interactions with a person. The robot is designed to function both as a fully autonomous robot as well as a semi...

Describes the approach to control a semi-autonomous robot team remotely under low bandwidth conditions with a single operator. The approach utilises virtual reality and the exoskeleton to create an immersive user interface for multi-robot control.

Describes the design, control and software features. Presents the teleoperation scenarios and gives an overview about the remote systems. Conclusion and outlook summarizes the achieved results and gives an outlook on further development.

Describes the specifications of the project, it's sponsors and the team, including contacts. Has download links to brochures.

Innovators Update S2E1: A Glove That Bridges The Gap Between Reality and Digitized Worlds

Andrew Spielberg is a PhD student at MIT's Computer Science and Artificial Intelligence Laboratory where he develops tools to automate both rigid and soft robot design.

In a topsy-turvy world, we humans often take for granted our ability to pick up and handle objects of different weights and sizes. We’ve probably all had the experience of picking up a suitcase that we assume is quite heavy and realizing that it’s completely empty.

Nao is an autonomous, programmable, medium-sized humanoid robot. of which the architecture of control and the software are customizable. NAO was designed to walk smoothly, even when changing speed an...