When palaeontologists and scientists watch films like Jurassic Park, most of them are less likely to focus on the exciting plot than on the question of how Hollywood film producers come to be so well versed in the behaviour and movements of long-extinct species. Even after decades of research, most experts in this field can make only vague statements about the life of an ankylosaurus and even these research results are highly controversial in professional circles.

The basic problem is that the relics of the animals allow us to conclude very little about their actual living conditions with any certainty and it is difficult to name hard facts based on a purely superficial analysis. This is a problem encountered not just in palaeontology but one which must be increasingly extended to other branches of biological research. Climate change, the disappearance of habitats, not to mention poaching by humans mean that more and more species of our present wildlife are threatened by extinction or have already disappeared from the face of the earth. Lucky breaks, such as the recently rediscovered Wondiwoi tree kangaroo which was thought to be extinct, are rare and research centres such as Hamburg University’s Natural History Centre (CeNak), which is engaged in research into biodiversity and evolution, have to be creative to obtain reliable results.

Here, the assistance provided by state-of-the-art X-ray technology plays directly into the scientists’ hands. The latest developments enable approaches that were inconceivable ten years ago. In particular, detailed analyses using today’s high-resolution computed tomography and 3D printed models based on it offer up a range of completely new opportunities for basic scientific research.

One of these creative solutions for exploring threatened or extinct species was applied to one of the scientific inventory items at CeNak. As part of the exhibition entitled “Vanishing Legacies: The World as a Forest”, the aim was to draw attention to the Sumatran rhinoceros in particular. It is estimated that there are only 100 animals of the species still alive and CeNak has owned a skull of one since the 1920s. 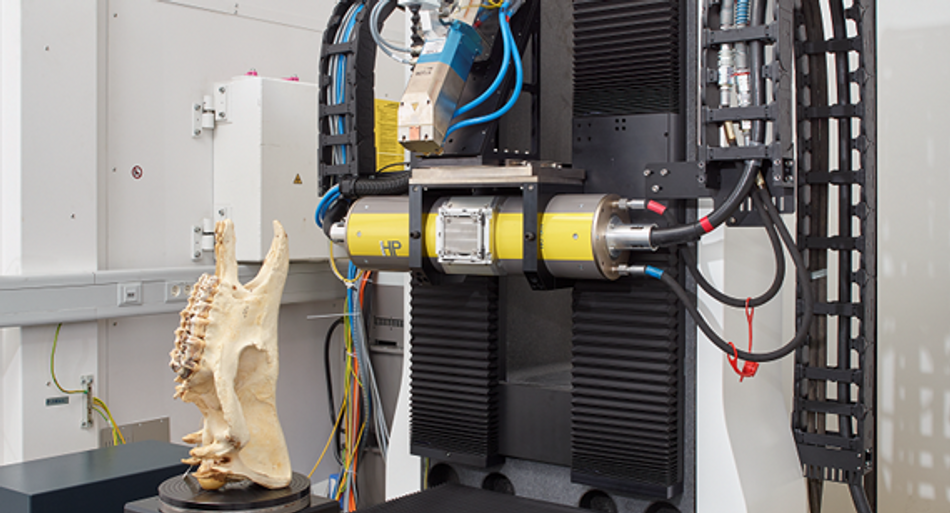 In the past, however, it was difficult to draw specific conclusions about the structure and anatomy of the bone.

Prof. Thomas Kaiser, Head of Mammalogy and Palaeoanthropology at CeNak used the exhibition as an opportunity to look for partners capable of making a more detailed study of the skull. The expert’s choice was YXLON International, a specialist company focusing on industrial radiography and computed tomography. The researcher’s goal was to create a 3D scan of the skull, designed on the one hand to draw attention to the near extinction of this critically endangered species at the exhibition, and on the other hand also to be used for scientific investigation into the mammal.

At Yxlon, normally more at home with castings, engines and electronics, this extremely challenging task features among the rapidly growing demand for applications in the natural sciences. In previous scans, Yxlon had only studied small animals such as frogs, snakes, fossils or individual animal organs; the skull of the Sumatran rhinoceros, which was many times larger, therefore posed a remarkable challenge. “Ultimately, for specimens as big as this, we need to use an appropriately large system and special recording techniques to obtain the maximum possible resolution,” explain Dr. André Beerlink and Philip Sperling, Sales Manager Science & New Materials at Yxlon. In the end, it was decided to use the YXLON FF85 CT system with the dual helix technique, in which the skull was rotated several times during the scanning process in order to image it completely and obtain good resolution. As a result, it was possible to achieve the goal of the team of scientists working with Prof. Kaiser of obtaining the most realistic and high-resolution digital 3D volume to simulate biomechanical behaviour. 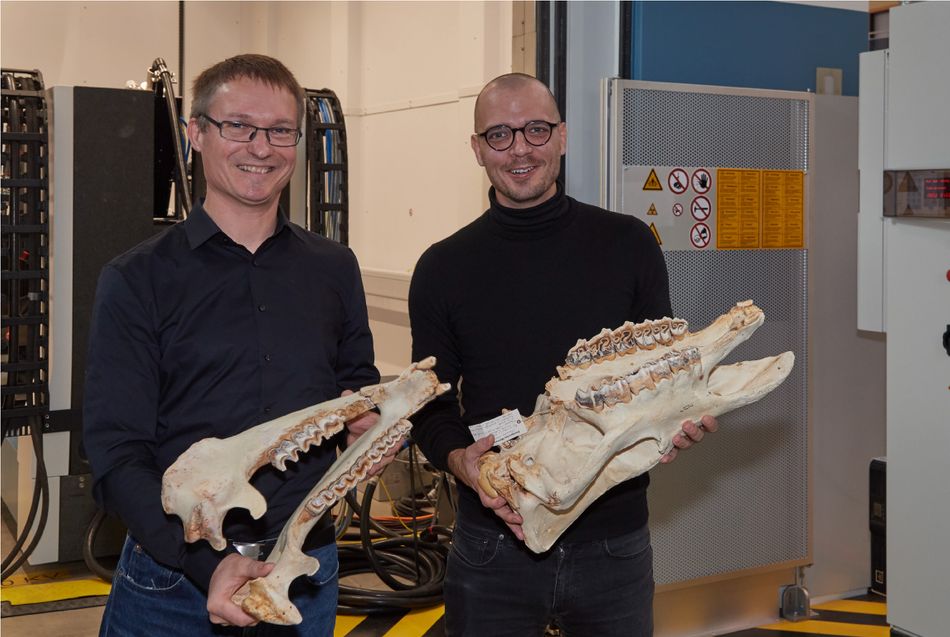 Accurate to a micrometre

After the tomography and some post-editing of the raw data and scan files, the finished work could be admired. The experts at Yxlon had managed to create an accurate digital replica of the rhinoceros skull. Everyone involved in the scan was surprised at the incredible level of detail it displayed. Thanks to the computed tomography scan and the special dual helix technique, it was possible to detect and replicate the finest structures only around 100 micrometres in size, even inside the skull. The digital 3D volume supplied the researchers with a wealth of new information which had remained hidden during previous research. New insights into the bone structure plus the biomechanical positions of the two jaw parts in relation to each other immediately enabled the scientists to gather some evidence regarding the animal’s age, diet and way of life which were hitherto unknown.

In addition to the CeNak exhibition, where the coloured skull scan displayed as a visualised, alienated object was designed to draw attention to this species under threat of extinction, the digital 3D volume was also used for biomechanical simulation of the jaw movements. With finite element simulations, it was possible to use the scanned skull to study the distribution of forces in the jaw and skull. The conclusions drawn from this about the morphology of the bone structure allow the scientists to make further in-depth assumptions regarding the animal’s living conditions. In the case of the Sumatran rhinoceros, this data could at best indicate habitats that would be suitable for resettling the threatened species and in the best case scenario might even prevent its complete extinction.

For the scientists working with Prof. Kaiser and the curators of the CeNak exhibition, the scan of the skull therefore represents the basis for further research work and exhibitions. But even for Yxlon itself, the finished scan was far from the end of the matter. 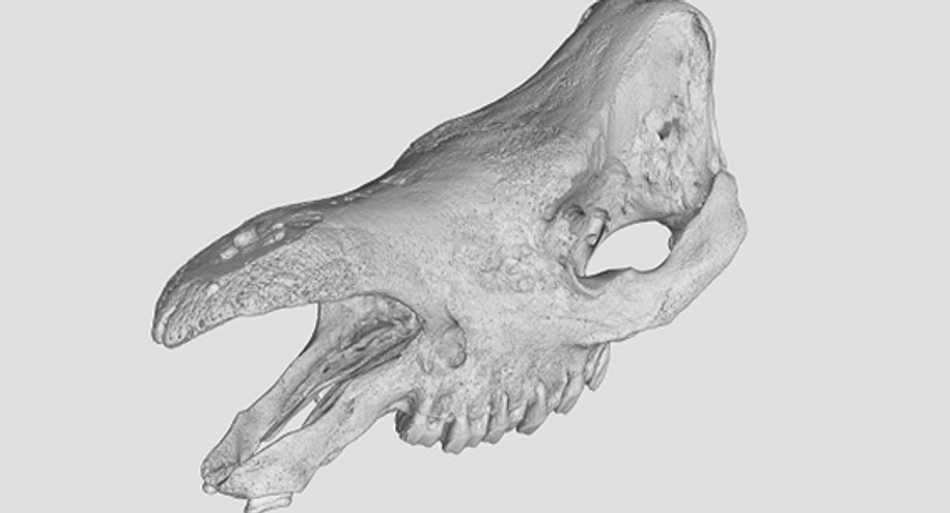 Due to the high cost and the exceptional quality and rarity of the scan, it quickly became clear to Yxlon that this project could provide an important showcase for the capabilities of its cutting-edge CT systems and for the company’s expertise. It ought to use the scan of the Sumatran rhinoceros skull as a special jewel in its crown. The Yxlon colleagues, however, had set a tight timeframe if they were to present it fittingly at the next trade fair.

While searching on the Internet during a business trip in New York, they became aware of Protolabs, a manufacturing source for custom prototypes and low-volume production using additive manufacturing as well as injection moulding and CNC processes. Since they only had access to the saved scan of the skull while they were on the road, the easily accessible data upload and online ordering service offered by Protolabs was very convenient. The company promises to provide even complicated files and designs in a wide range of materials within a short time while still remaining as intuitive and easy as possible for the user. The experts at Protolabs got in touch the very next day to discuss the way forward since this type of 3D printing was also unusual for them.

Despite the limited time until opening of the trade fair and the short lead time for the actual 3D printing, as well as obligatory adjustments to the scan to ensure feasibility of the additive process, the experts at Protolabs managed to produce a deceptively real replica of the Sumatran rhinoceros skull. It was possible to identify even the smallest details of the original on the model, only the material was different. Instead of bone, the 3D printed model was made of the material Accura Xtreme White 200, making it somewhat lighter in colour and with no staining. Philip Sperling and Dr. André Beerlink were delighted with the quality.

For our customers, partners and also for us, it was extremely exciting to discover that we had the opportunity to make CT scans real and tangible and that Protolabs was able to print the very fine details of this Sumatran rhinoceros skull in the same quality. The impressively fast processing time and competent advice on this complicated undertaking simply rounded off our positive experience with Protolabs.

In future, however, such 3D printed models may be used not just as a showcase at trade fairs. The example of the Sumatran rhinoceros has shown that CT scanning and additive manufacturing can be used to create deceptively real replicas of rare fossils that are invaluable for research and teaching. Modern technologies can be used to make assumptions about the way animals live and behave and, at the same time, they can create exemplary research objects for tests and further research into living creatures that have long since ceased to inhabit our earth. This is also how Daniel Cohn, Managing Director of Protolabs Germany sees it, “Even if reproducing fossils presents a special challenge, all the effort is worth it for such a faithful replica. We are proud to provide a great service to science with our replicas and also to contribute to the protection of species.”

At first glance the parts that SLS and MJF produce may seem similar, but a closer look reveals there are some key differences that may sway you to using one over the other.