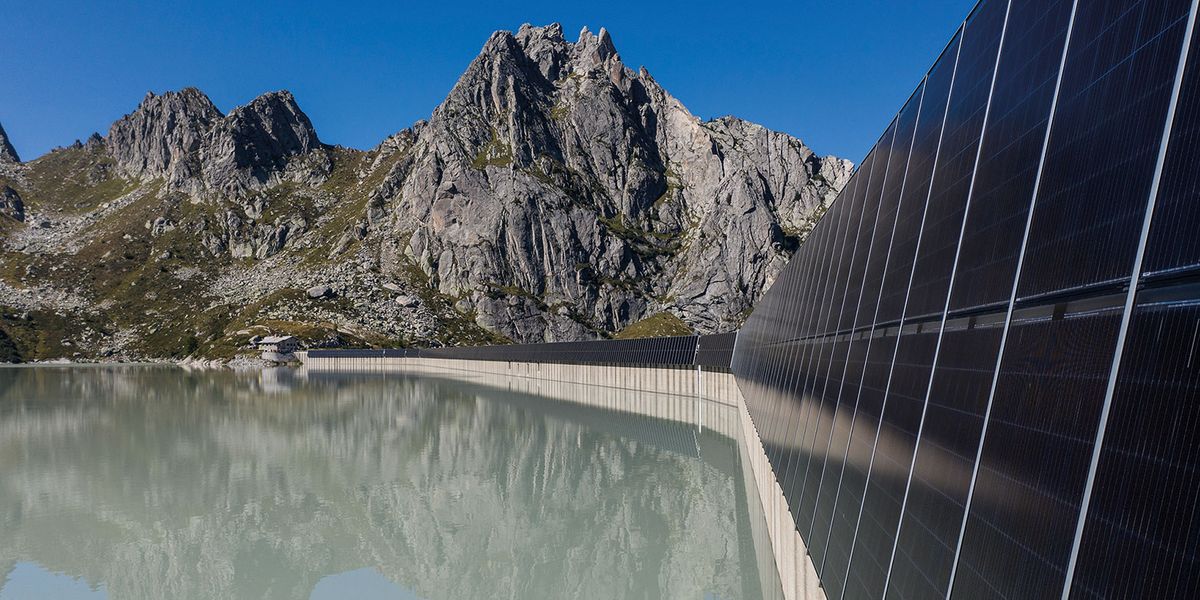 Net-zero is a target that the Swiss energy system has to meet by 2050. This means that the entire energy value chain of generation, distribution, storage and use will no longer emit climate-changing greenhouse gases into the atmosphere, and will be climate-neutral overall. The replacement of fossil fuels will play a key role in this regard, and can be achieved in Switzerland through the electrification of the transport and heating sectors. “Research shows us that it is technically and economically possible for the Swiss energy system to function without fossil fuels by 2050.”

These were the words of Vanessa Wood, ETH Vice President for Knowledge Transfer and Corporate Relations, at the public symposium of “Energy Week 2021”, the annual ETH energy conference. It is an viewpoint shared by Monika Krüsi, Chair of the Board of Directors of Repower, a Swiss distribution and service company in the energy sector. The energy industry and its approaches to solutions are still highly heterogeneous, she says; pragmatic solutions and an investment-friendly market environment are essential for the future, along with collaboration, flexibility and digitalisation.

In recent weeks, ETH researchers have calculated possible energy scenarios with a view to highlighting the various development possibilities for the composition of a climate-neutral energy system in Switzerland by 2050. Five main trends have emerged, as Gabriela Hug, Professor of Electrical Energy Systems and Chair of the Energy Science Center (ESC) explained at the symposium:

The energy scenarios are not forecasts. They do not make any predictions about the future, but show what trends are possible based on certain assumptions and starting points. 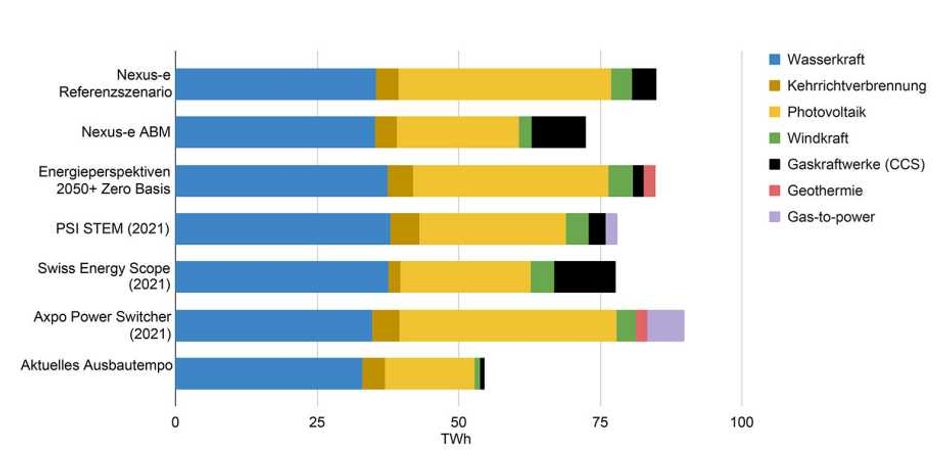 Comparison of selected net-zero scenarios for the Swiss electricity system in 2050. The scenarios are mostly consistent with each other in terms of trends: Domestic electricity production increases, hydropower remains important, solar power has the largest increase, while wind energy is limited. (Graphic: Energy Science Center ESC)

Expanding the deployment of photovoltaics

A comparison of the different scenarios confirms the importance of expanding the deployment of photovoltaics in Switzerland. In the Nexus-e reference scenario, the main scenario used by the ETH researchers based on economic optimisation, electricity from hydropower and photovoltaic (PV) systems will cover most of the future electricity demand, while other renewable energies such as biomass and wind power will play a lesser role. This result is comparable with the “Energy Perspectives 2050+call_made”, the net-zero scenarios from the federal government.

In the comparative scenarios, on the other hand, in which photovoltaics use is not expanded to the extent that would actually be technically and economically feasible, it would be difficult for Switzerland to meet future electricity demand from its own production. If the rate of expansion of solar energy were to remain at the current level, the supply of electricity in 2050 would fall well short of demand due to the phase-out of nuclear power, and Switzerland would have to import large amounts of electricity.

Even in the Nexus-e reference scenario, the strong expansion of photovoltaic systems would only offset the phase-out of nuclear power in the long term. This would necessitate high electricity imports, especially around 2040, once the nuclear power plants are no longer in operation. Towards 2050, wind power, pumped storage and gas-fired power plants (including the storage of greenhouse gases emitted) could make all the difference when it comes to Switzerland meeting its electricity needs.

The supply of electric power will also be influenced in no small part by the framework conditions for electricity trade with Europe: “As long-term restrictions on electricity trading could affect the security of supply in Switzerland, it might make sense to invest in wind power and gas-fired power plants from 2040,” said Hug. Gas-fired power plants could serve as flexible electricity production units that can also generate electricity at short notice and on a seasonal basis, for example in winter. Depending on the scenario, they are an option or a necessity. The resulting CO2 emissions, however, would have to be captured and stored in every case.

When it comes to actually reducing greenhouse gas emissions in the long term and optimising the energy system as a whole – and here the representatives from science and business were in agreement – cross-sectoral cooperation and value chains will play a crucial role in the future. “The growth of renewable energy technologies goes hand in hand with the coupling of sectors,” said Annegret Stephan, economist in the ETH “Sustainability and Technology” research group.

Using the example of energy planning that jointly examines the electrification of buildings and mobility, Kristina Orehounig, head of the Urban Energy Systems Laboratory at Empa, highlights how such sector coupling can work at neighbourhood level. How exactly sector coupling and flexibility can contribute to a climate-neutral energy system in Switzerland is being investigated by researchers in the SWEET PATHFNDRcall_made research consortium led by ETH Zurich, which was launched in May. The symposium provided a vivid demonstration of Vanessa Wood’s opening words – namely that a sustainable energy future is everyone’s business, and everyone needs to play their part.

Artificial intelligence listens to the sound of healthy machines

Early endeavours on the path to reliable quantum machine learning

A more positive outlook may impact how close to the coast future offshore wind farms and energy islands can be constructed and therefore also the costs of building these facilities and their ongoing operations.

The pore size can easily be tuned to meet the desired application.