As the darkest days of the year near, a team of Penn State Berks researchers suggest that a wearable device that can track when people are indoors or outdoors could help scientists determine the health and mental health implications of indoor and outdoor lighting. Image: Pixabay

Taking an interdisciplinary approach — and mixing in a little do-it-yourself initiative — a team of Penn State Berks researchers developed a wearable device that can tell the difference between indoor and outdoor lighting. The team adds that the device could help scientists better understand the health benefits of outdoor lighting and, in the future, lead to wearables that could nudge users to get more outdoor time.

The researchers describe the portable device in a recent issue of Hardware X. It includes sensors that can collect data on light sources, including wavelength and frequency data. They used a machine learning method called an artificial neural network — or ANN — to examine that data to determine whether the device was placed indoors or outdoors.

According to Matthew Rhudy, assistant professor of engineering, outdoor and indoor lighting have distinct differences that sensors can detect. The sun gives off vast quantities of light in the ultraviolet spectrum, or UV light, he said. Indoor lighting tends to be in the visible spectrum.

“We collected a lot of data with the sensor package,” said Rhudy. “We would set the sensors in various places and let it log data for an hour or so in all sorts of different situations and in different lighting conditions. The UV index alone is pretty good at detecting it. If it’s detecting significant amount of UV index, there’s a pretty good chance you’re outside.”

Light intensity, even if it’s cloudy, and differences in color temperature, are also signals for exposure to outdoor lighting. Current research suggests that exposure to natural light outdoors can have both mental and physical health benefits, according to the researchers. While scientists currently study these effects, they mainly rely on participants to record their own observations of when they are indoor or outdoor, which scientists refer to as self-reports.

According to the Penn State Berks team, self-report may not be as accurate as a wearable device that can precisely note the changes in lighting, as well as the amount of exposure to the different light sources.

Initial testing of the device was done by placing the device in fixed locations to collect light data for approximately one hour. Once the data was logged, the researchers used an ANN to classify the data as either indoor or outdoor lighting. To validate the device, the researchers placed the sensor package in a fixed indoor or outdoor location and collected data in a variety of locations, times and weather conditions. A total of 3640 indoor and 1368 outdoor samples were collected. 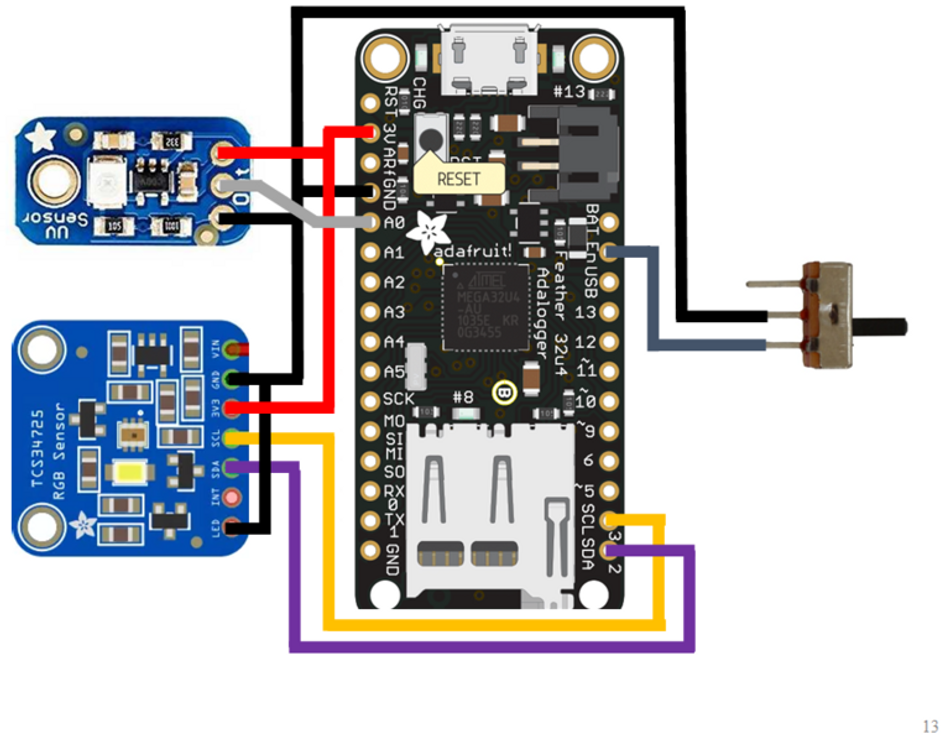 Rhudy said the team took a do-it-yourself approach to building the device, relying on readily available off-the-shelf components. The total cost was about $70, based on that approach, he added.

“I could see that it could be done cheaper – especially if we could maybe work with an electronics company and mass produce it,” he said.

The model currently does not have the ability to transmit data, but wireless addition, such as Bluetooth, could be added to future versions.

According to Rhudy, without Penn State Berks’ formal and informal encouragement of interdisciplinary collaborations, the work may have never seen the light, so to speak. Rhudy’s engineering background needed to be augmented with his teammates’ psychological and biomechanical expertise, he said.

“These kinds of projects happen a lot on our campus,” said Rhudy. “When I first started, we had a group of new faculty — and there was already a group of faculty meeting together — forming a research group called the Human Movement Research Center, which is primarily a collaboration between kinesiology and engineering, but also includes psychology members. The main idea is exploring this human connection between mental health, physical health, as well as the mechanics of the human body.”

Rhudy, who in the past studied sensor and sensor design mainly for use in unmanned aircraft, added that these interdisciplinary connections can help with more than just filling in gaps in knowledge, they are important for innovation itself.

“Just being in the same room with people from kinesiology and psychology and talking about the kinds of work that they are doing sparked ideas,” he said.

According to Rhudy, the next steps will be to explore the possibilities of making this a larger long-term project and seeking additional external funding.

Controlling insulin production with a smartwatch

Controlling insulin production with a smartwatch

ETH Zurich researchers have developed a gene switch that can be operated with the green LED light emitted by commercial smartwatches. This revolutionary approach could be used to treat diabetes in the future.

Medsled, a team from ITMO University, has developed a concept of a smart armband for monitoring the condition of hospital patients. Unlike its competitors, the new solution doesn’t have a screen and can transport data directly into a medical information system.