The twin-bored Brynglas tunnels are located on the M4 at Newport, South Wales. With about 80,000 vehicles passing through on peak days, the Brynglas tunnels are of major economic importance to the region. Incidents in these tunnels have immediate effects on traffic congestion and overall accessibility. That is why it is of crucial importance that vehicle-related accidents are detected and reported as soon as possible, so that response teams can intervene and secondary accidents can be avoided.

One of the tunnel systems CCSL had within its scope was the incident detection system. After a thorough market appraisal, CCSL selected the thermal and visual incident detection cameras from FLIR Systems, together with FLIR’s video detection management software, Flux.

“A tunnel refurbishment is usually a long and challenging process,” said Carl Cheetham, Technical Director at CCSL. “Hence, it is important to have a reliable partner along for the journey who can give you the required support. We had previously received excellent service and support from FLIR and this made the choice of supplier/partner a simple one.” 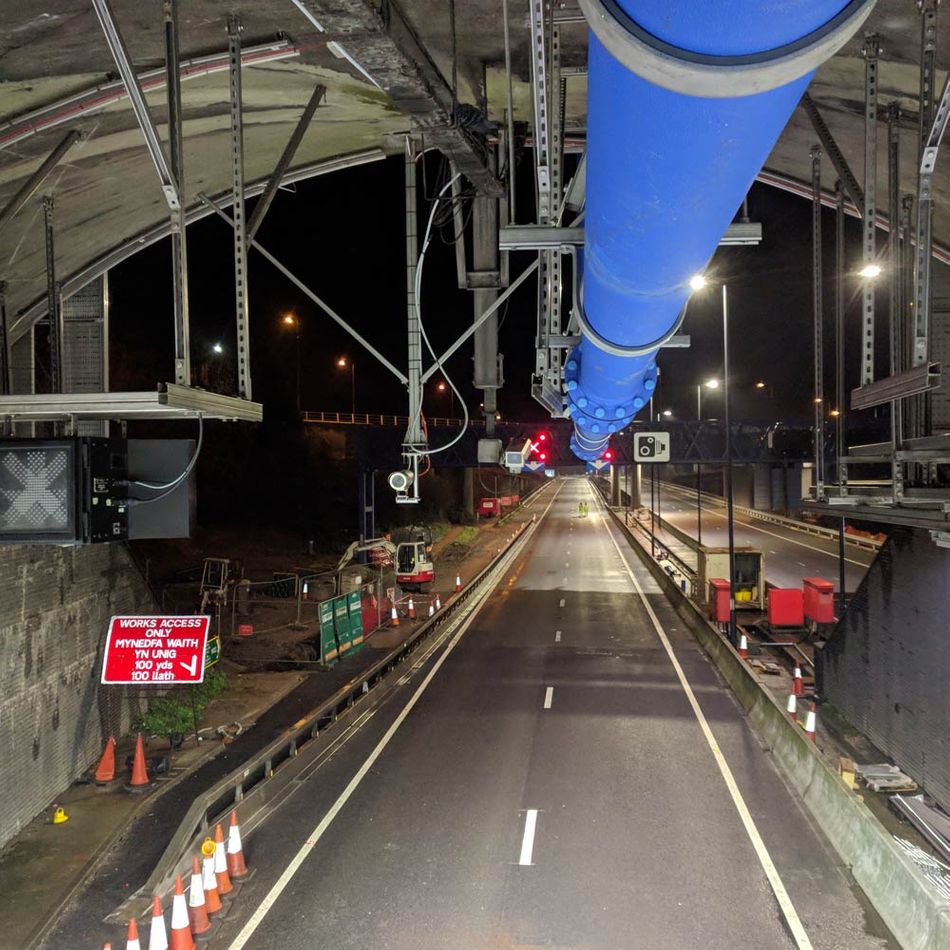 The Brynglas tunnels are of major economic importance to the region.

The Brynglas tunnels now use 13 FLIR TrafiBot HD cameras with built-in Automatic Incident Detection (AID) functionality. The video feeds are analyzed locally at the camera before relevant alarms/events are generated and sent to the redundant Flux video management servers.

Additionally, eight FLIR FC-Series ITS thermal imaging cameras are installed at the entrances and exits of both tunnel bores. A visible-light camera can possibly suffer from sun glare if it is positioned to point outwards at the tunnel portal. As a result, the image for the portal areas would be blank due to light contrast and the camera would not be able to detect any potential incident around the portal areas. To avoid this, the first visual camera is pointed into the tunnel, while the blind spot underneath the camera and at the portal exit area are covered by the FLIR FC-Series ITS thermal cameras.

An AID system is only as good as the information that is presented to the traffic control room operator. To enable rapid identification and notification of an incident, FLIR’s AID cameras and Flux video management system provide operators with an alarm within seconds of an incident occurring.

“The FLIR incident detection cameras have been performing very well since their installation in April 2018,” said Carl Cheetham. “Thanks to a smart combination of visual and thermal camera technologies, FLIR has been able to reduce the false alarm rate to a minimum without missing real alarms.”

How to Automatically Track Occupancy to Meet Social Distancing Guidelines

As many commercial spaces begin to reopen, the need to find effective and practical ways to maintain social distancing inside retail outlets and other capacity-limited spaces is growing.

Gas leaks at refined oil and/or petrochemical facilities can lead to severe crisis, causing huge financial losses and even leading to casualties. Thorough prevention and inspection, along with immediate remedial measures upon leak detection, are essential.