We all react to stress in different ways. A sudden loud noise or flash of light can elicit different degrees of response from people, which indicates that some of us are more susceptible to the impact of stress than others.

Any event that causes stress is called a “stressor”. Our bodies are equipped to handle acute exposure to stressors, but chronic exposure can result in mental disorders, e.g. anxiety and depression and even physical changes, e.g. cardiovascular alterations as seen in hypertension or stroke-disorders.

There has been significant effort to find a way to identify people who would be vulnerable to develop stress-related disorders. The problem is that most of that research has relied on self-reporting and subjective clinical rankings, or exposing subjects to non-naturalistic environments. Employing wearables and other sensing technologies have made some headway in the elderly and at-risk individuals, but given how different our lifestyles are, it has been hard to find objective markers of psychogenic disease.

Approaching the problem with VR

Now, behavioral scientists led by Carmen Sandi at EPFL’s School of Life Sciences have developed a virtual-reality (VR) method that measures a person’s susceptibility to psychogenic stressors. Building from previous animal studies, the new approach captures high-density locomotion information from a person while they explore two virtual environments in order to predict heart-rate variability when exposed to threatening or highly stressful situations.

Heart rate variability is emerging in the field as a strong indicator of vulnerability to physiological stress, and for developing psychopathologies and cardiovascular disorders.

In the second scenario, the participants found themselves on an elevated virtual alley several meters above the ground of a virtual city. They were then asked to explore the alley for 90 seconds, and then to return to the red step. Once on it, the step began to descend faster and faster it reached the ground level. Another fade, and then came the final scenario.

In the third scenario, the participants were “placed” in a completely dark room. Armed with nothing but a virtual flashlight, they were told to explore a darkened maze corridor, in which four human-like figures were placed in corner areas, while three sudden bursts of white noise came through the participant’s headphones every twenty seconds. 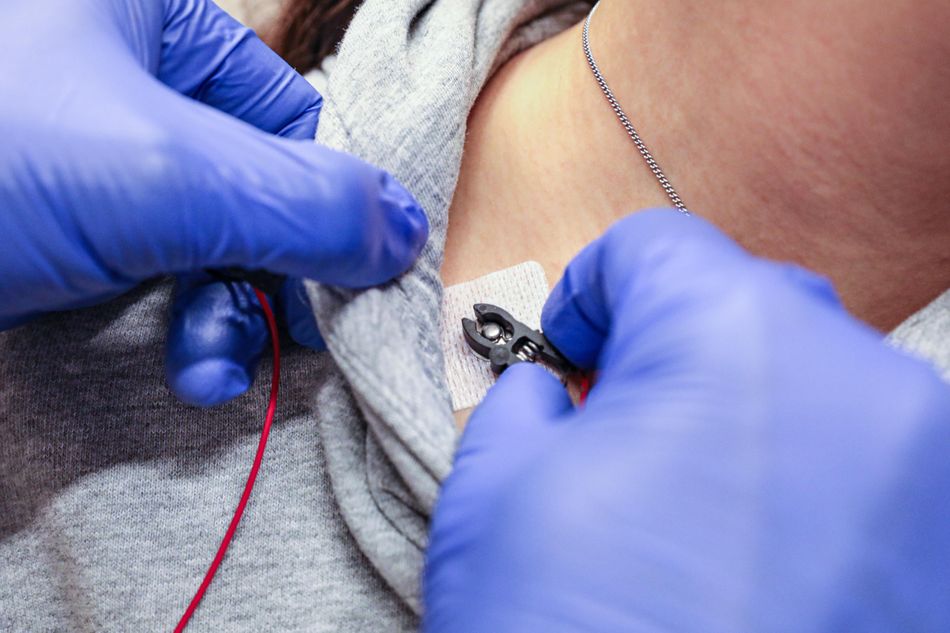 The researchers measured the heart rates of the participants as they went through each VR scenario, collecting a large body of heart-rate variation data under controlled experimental conditions. Joao Rodrigues, a postdoc at EPFL and the study’s first author, then analyzed the locomotor data from the first two scenarios using machine-learning methods, and developed a model that can predict a person’s stress response – changes in heart rate variability – in the third threatening scenario.

The team then tested the model and found that its predictions can work on different groups of participants. They also confirmed that the model can predict stress vulnerability to a different stressful challenge in which participants were put through a final VR test, where they had to quickly perform arithmetic exercises, and see their score compared to others’. The idea here was to add a timed and social aspect to stress. In addition, when they gave wrong answers, parts of the virtual floor broke down while a distressing noise played.

Finally, the researchers also confirmed that their model outperforms other stress-prediction tools, such as anxiety questionnaires. Carmen Sandi says: “The advantage of our study, is that we have developed a model in which capturing behavioral parameters of how people explore two novel virtual environments is enough to predict how their heart rate variability would change if they were exposed to highly stressful situations; hence, eliminating the need of testing them in those highly stressful conditions.” Measuring stress vulnerability in the future

The research offers a standardized tool for measuring vulnerability to stressors based on objective markers, and paves the way for the further development of such methods.

“Our study shows the impressive power of behavioral data to reveal individuals’ physiological vulnerability. It is remarkable how high-density locomotor parameters during VR exploration can help identify persons at risk of developing a myriad of pathologies –cardiovascular, mental disorders, etc – if exposed to high stress levels. We expect that our study will help the application of early interventions for those individuals at risk.”