Wind turbines are among the most important technologies for a sustainable energy supply. In the case of offshore plants, maintenance teams and materials have to travel long distances to reach the site. The time and costs involved are comparatively high. Could drones provide a safe and effective alternative to sending out ships, helicopters and cranes in future, and could they take some of the pressure off of maintenance staff? This is the focus of the Upcoming Drones Wind Farm (UDW) project, jointly conducted by the German Aerospace Center (Deutsches Zentrum für Luft- und Raumfahrt; DLR) and energy supplier EnBW Energie Baden-Württemberg AG.

Drones are already being used to inspect wind turbines, but the experience gained from operating small inspection drones cannot be scaled up to transport drones. "In future, transport drones will have to be able to handle loads of several hundred kilograms and enable the direct transport of maintenance personnel. These options have not yet been tested," says Sebastian Cain of the DLR Institute of Flight Systems in Braunschweig. The DLR researchers will also be looking at the cost-effectiveness of such transport drones, in conjunction with the DLR Institute of Air Transportation Systems in Hamburg. "The project should provide a clear indication of the conditions under which drones can reasonably be used in wind farms," says Cain. 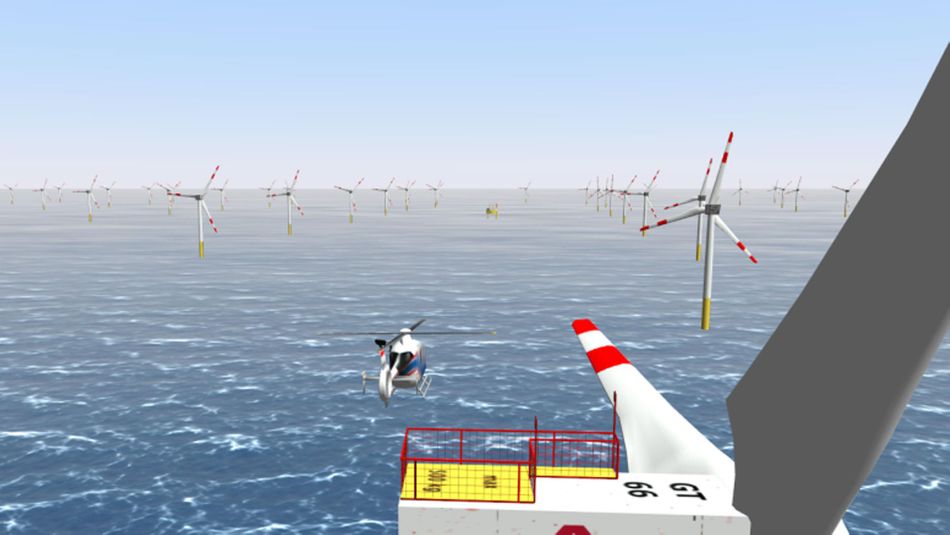 Preliminary study on the use of helicopters in offshore wind farms (simulation). Credit: DLR (CC BY-NC-ND 3.0)

As part of the project, researchers will be looking at the interaction between the drones and the wind turbines. Which interfaces are necessary, how is information exchanged, and which regulatory requirements must be taken into account? "The goal is for the drone to calculate the best route itself. If transit flights are to be carried out, we need to have information on which flight paths are safe, and wind turbines must be stopped if necessary. Of course, we need to interfere with the operation of the system as little as possible," says Cain. Dangerous areas, such as air turbulence zones behind active wind turbines, will need to be avoided, and DLR has conducted measurements on wind turbines for that purpose.

EnBW will bring its particular perspective and expertise as a wind farm operator to bear on the areas of the project that focus on wind power. DLR will define the general conditions for operating drones in a wind farm environment and release its findings relating to unmanned aerial vehicles. Its researchers are conducting experiments using a DLR drone at a wind farm on land. At the same time, DLR will develop a model for offshore operations and examine it in detail using simulations.

The project partners are also planning an 'Offshore Drone Challenge' (ODC), where drone manufacturers and service providers will have the opportunity to present their products as suitable solutions during a call for proposals. Technology providers will benefit from the research findings. Initial workshops as part of the project are planned for autumn 2022. The Upcoming Drones Wind Farm project is funded by the Federal Ministry for Economic Affairs and Climate Action (Bundesministerium für Wirtschaft und Klimaschutz; BMWK).

The Assured Autonomy Research Initiative, as the project is called, aims to improve the safety and reliability of sUAS by creating a redundant flight control system

Imagine designing a robotic glider able to accelerate to 800km per hour using only the wind at its back. Combining passion with work, EPFL Professor Pascal Fua is leading research to develop the required capabilities, with important implications for sustainability.