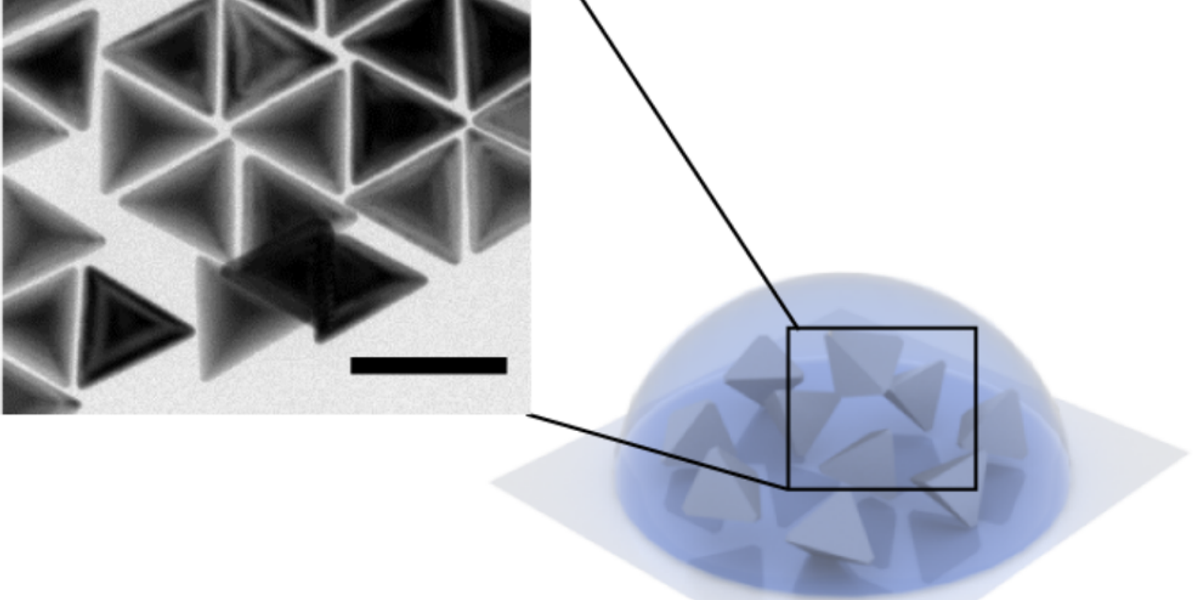 As the droplet dries, the nanoparticles settle into pinwheel patterns. The ability to make these twisted structures at the nanoscale could have applications in sensing, machine vision and more. Credit: S. Zhou et al

Producing chirality, a property found throughout nature, through large-scale self-assembly could lead to applications in sensing, machine perception and more.

A newly discovered pinwheel structure—self-assembled from pyramid-shaped nanoparticles—may enable unique material properties that could be useful in areas like machine vision, armor, chemical and biological sensing, and more. The finding comes from a research collaboration led by the University of Illinois Urbana-Champaign and the University of Michigan. 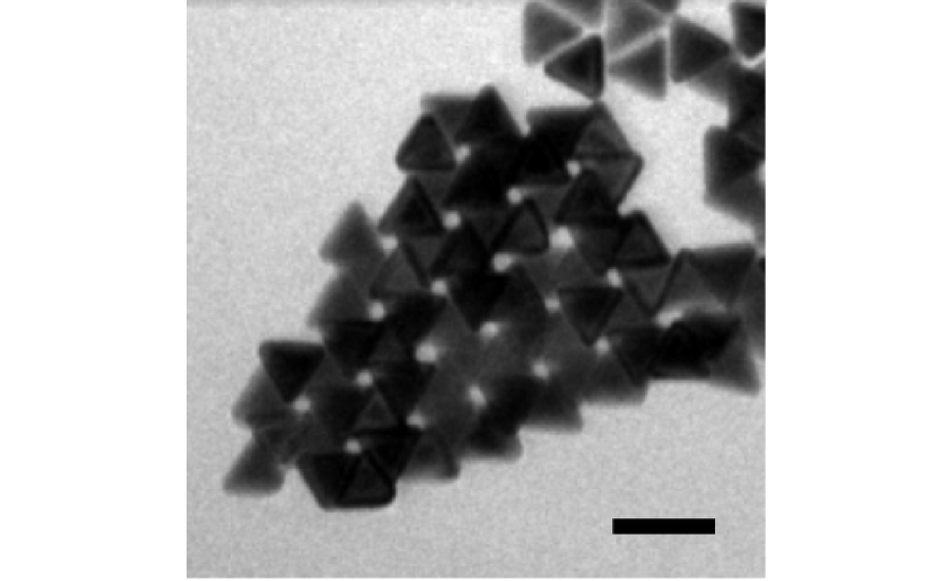 An electron microscope image shows the nanopyramids settled into a pinwheel pattern. The ability to make these twisted structures at the nanoscale could have applications in sensing, machine vision and more. Credit: S. Zhou et al

A key quality of the nanomaterial is chirality, a kind of twist found throughout nature from DNA’s double-helix to spiral galaxies. Nature uses chirality to reliably engineer very complex and dynamic systems, including all living organisms. Recreating these twisted structures on the nanoscale hasn’t been easy, however. Researchers have relied on templates that produced very small structures, limiting their usefulness in the design of nano-engineered materials, explained Qian Chen, a professor of materials science and engineering at UIUC and co-corresponding author of the paper in Nature.

The team decided to explore the possibilities of pyramid-shaped particles as building blocks, which had previously been shown to arrange themselves into patterns that could change depending on their environments. Using graph theory, Nicholas Kotov, the Irving Langmuir Professor of Chemical Sciences and Engineering and co-corresponding author of the paper, and Jun Lu and Ji-Young Kim, postdoctoral researchers in chemical engineering and all at U-M, predicted that complex structures can emerge—just like in living systems—when the arrangements of these particles are chiral.

“It is amazing to observe how tight the relationship between chirality and practicality is.  As soon as the particle layer becomes chiral, it acquires new useful properties,” said Kotov.

Then Chen and her group made the structures out of gold nanoparticles, enabling them to self-assemble while floating in a tiny droplet of a water-based solution that sat atop a silicon wafer. As the fluid dried, the pyramids self-assembled onto the flat surface.

If the particles have no electric charge, they form a honeycomb pattern that isn’t chiral. But electric charges make the tiny pyramids turn a little with respect to one another, twisting the honeycomb into a repeating pinwheel structure.

“The resulting lattice is large enough to be seen with the naked eye,” said former Illinois postdoctoral researcher Shan Zhou, the first author of the study and now an assistant professor of nanoscience and biomedical engineering at South Dakota School of Mines and Technology.

While the lattice may be visible with the naked eye, the assembly of pyramids with 100-nanometer sides was not—Chen had an electron microscope set up to peer into the droplets. In fact, that feedback enabled the team to adjust the electric charge to get the pinwheel pattern.

“The liquid-phase electron microscopy allowed us to take the superlattice assembly even further,” Chen said.

Measuring how the twist on those pinwheels could affect light wasn’t possible in an ordinary lab, though. The trouble is, the pinwheel pattern isn’t one continuous design—it is broken into smaller domains like neighborhoods on a city map. These were equally divided between a right-hand twist and a left-hand twist. Shine light through it, and it doesn’t get the strong twist it would get if all the pinwheels pointed in the same direction. With domains 0.005 millimeters across, even a laser wasn’t small enough to focus on a single one.

“The biggest challenge is to characterize and understand the chirality of the superlattices,” said Lu.

The team had to take their pinwheel samples to Argonne National Laboratory to be measured with a laser and an electron microscope. The laser provided twisted light that was tightly focused on a few domains, and the domains that matched the twist were essentially lit up when viewed with an ultrafast electron microscope.

“No one has been able to directly see the chiral responses of objects at such a small length using other techniques,” said Haihua Liu, a researcher at Argonne’s Center for Nanoscale Materials, who helped measure the chirality of the pinwheel lattices. 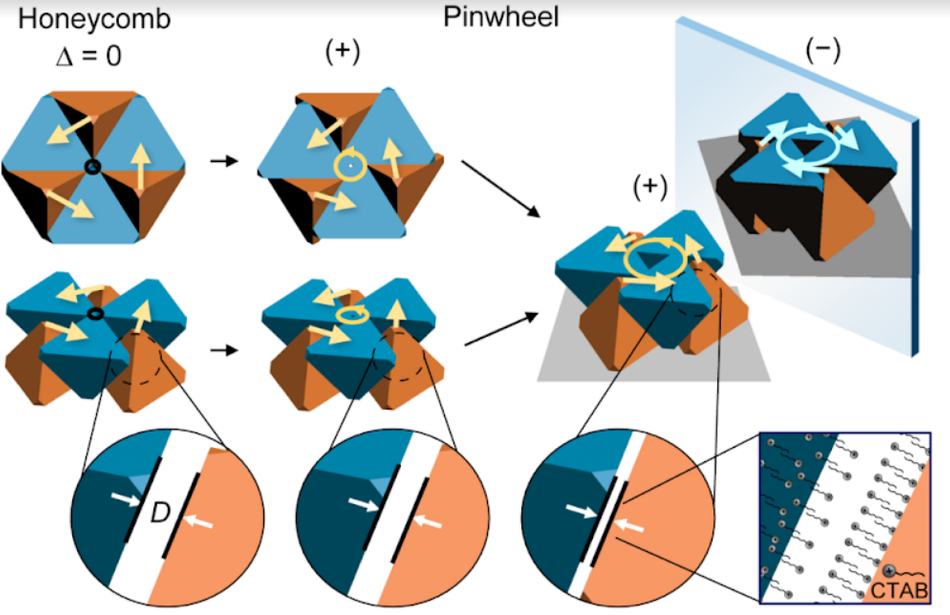 The illustration shows how the honeycomb structure reconfigures into a pinwheel structure. The ability to make these twisted structures at the nanoscale could have applications in sensing, machine vision and more. Credit: S. Zhou et al

Future work on the structures will explore how to achieve lattices that twist in only one direction and then translate these chiral assemblies into a range of applications. Kotov suggests biosensors for viruses and “smart,” adaptable catalysts that take advantage of the quick shift from the honeycomb to the pinwheel structure. This dynamic reconfiguration could also be useful for machine vision such as LiDAR on self-driving cars, which relies on twisted light to achieve depth perception. Kai Sun, an associate professor of physics at U-M and study coauthor, said that the pinwheel lattices are potentially useful in the design of combat helmets and airplanes, for example.

“The interesting behaviors of pinwheel lattice can go beyond their chiroptical responses,” said Alex Travesset, a professor at Iowa State University who performed the geometric calculations for the pinwheel lattice.

The Office of Naval Research supported this research through a Multidisciplinary University Research Initiative.

In this episode, we talk about how MIT has built a magic carpet to avoid privacy concerns with human body tracking, an initiative from Texas A&M to track nanoparticles in produce, and the novel approach from Carnegie Mellon to turn household items into sensors.