Scientists prepare to deploy an underway CTD from the back deck of a research vessel. Image: Amala Mahadevan

The motion of the ocean is often thought of in horizontal terms, for instance in the powerful currents that sweep around the planet, or the waves that ride in and out along a coastline. But there is also plenty of vertical motion, particularly in the open seas, where water from the deep can rise up, bringing nutrients to the upper ocean, while surface waters sink, sending dead organisms, along with oxygen and carbon, to the deep interior.

Oceanographers use instruments to characterize the vertical mixing of the ocean’s waters and the biological communities that live there. But these tools are limited in their ability to capture small-scale features, such as the up- and down-welling of water and organisms over a small, kilometer-wide ocean region. Such features are essential for understanding the makeup of marine life that exists in a given volume of the ocean (such as in a fishery), as well as the amount of carbon that the ocean can absorb and sequester away.

Now researchers at MIT and the Woods Hole Oceanographic Institution (WHOI) have engineered a lightweight instrument that measures both physical and biological features of the vertical ocean over small, kilometer-wide patches. The “ocean profiler,” named EcoCTD, is about the size of a waist-high model rocket and can be dropped off the back of a moving ship. As it free-falls through the water, its sensors measure physical features, such as temperature and salinity, as well as biological properties, such as the optical scattering of chlorophyll, the green pigment of phytoplankton.

“With EcoCTD, we can see small-scale areas of fast vertical motion, where nutrients could be supplied to the surface, and where chlorophyll is carried downward, which tells you this could also be a carbon pathway. That’s something you would otherwise miss with existing technology,” says Mara Freilich, a graduate student in MIT’s Department of Earth, Atmospheric, and Planetary Sciences and the MIT-WHOI Joint Program in Oceanography/Applied Ocean Sciences and Engineering.

Freilich and her colleagues have published their results today in the Journal of Atmospheric and Oceanic Technology. The paper’s co-authors are J. Thomas Farrar, Benjamin Hodges, Tom Lanagan, and Amala Mahadevan of WHOI, and Andrew Baron of Dynamic System Analysis, in Nova Scotia. The lead author is Mathieu Dever of WHOI and RBR, a developer of ocean sensors based in Ottawa.

Oceanographers use a number of methods to measure the physical properties of the ocean. Some of the more powerful, high-resolution instruments used are known as CTDs, for their ability to measure the ocean’s conductivity, temperature, and depth. CTDs are typically bulky, as they contain multiple sensors as well as components that collect water and biological samples. Conventional CTDs require a ship to stop as scientists lower the instrument into the water, sometimes via a crane system. The ship has to stay put as the instrument collects measurements and water samples, and can only get back underway after the instrument is hauled back onboard.

Physical oceanographers who do not study ocean biology, and therefore do not need to collect water samples, can sometimes use “UCTDs” — underway versions of CTDs, without the bulky water sampling components, that can be towed as a ship is underway. These instruments can sample quickly since they do not require a crane or a ship to stop as they are dropped.

Freilich and her team looked to design a version of a UCTD that could also incorporate biological sensors, all in a small, lightweight, towable package, that would also keep the ship moving on course as it gathered its vertical measurements.

“It seemed there could be straightforward synergy between these existing instruments, to design an instrument that captures physical and biological information, and could do this underway as well,” Freilich says. 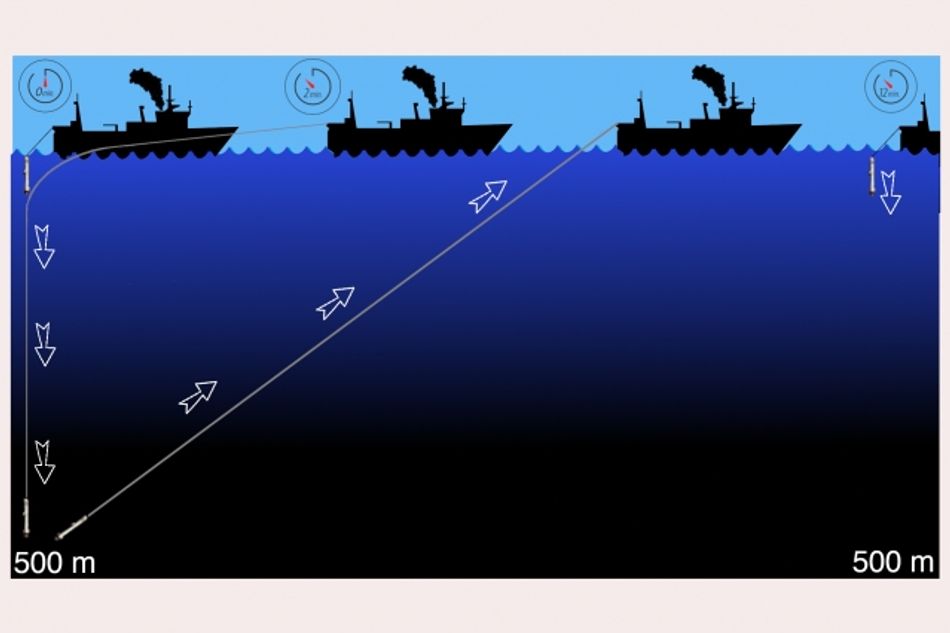 ﻿A new MIT-designed ocean sensor is designed to free-fall off the back of a moving ship. The instrument takes physical and biological measurements down to 500 meters, and can be pulled back up within minutes, and dropped again, without having to stop a research vessel. Image: Mathieu Dever

The core of the EcoCTD is the RBR Concerto Logger, a sensor that measures the temperature of the water, as well as the conductivity, which is a proxy for the ocean’s salinity. The profiler also includes a lead collar that provides enough weight to enable the instrument to free-fall through the water at about 3 meters per second — a rate that takes the instrument down to about 500 meters below the surface in about two minutes.

“At 500 meters, we’re reaching the upper twilight zone,” Freilich says. “The euphotic zone is where there’s enough light in the ocean for photosynthesis, and that’s at about 100 to 200 meters in most places. So we’re reaching the dark ocean.”

Another sensor, the EcoPuck, is unique to other UCTDs in that it measures the ocean’s biological properties. Specifically, it is a small, puck-shaped bio-optical sensor that emits two wavelengths of light — red and blue. The sensor captures any change in these lights as they scatter back and as chlorophyll-containing phytoplankton fluoresce in response to the light. If the red light received resembles a certain wavelength characteristic of chlorophyll, scientists can deduce the presence of phytoplankton at a given depth. Variations in red and blue light scattered back to the sensor can indicate other matter in the water, such as sediments or dead cells — a measure of the amount of carbon at various depths.

The EcoCTD includes another sensor unique to UCTDs — the Rinko III Do, which measures the oxygen concentration in water, which can give scientists an estimate of how much oxygen is being taken up by any microbial communities living at a given depth and parcel of water.

“The nice thing is, by the time we go to the next cast, we’re 500 meters away from where we were the first time, so we’re exactly where we want to sample next,” Freilich says.

They tested the EcoCTD on two cruises in 2018 and 2019, one to the Mediterranean and the other in the Atlantic, and in both cases were able to collect both physical and biological data at a higher resolution than existing CTDs.

“The ecoCTD is capturing these ocean characteristics at a gold-standard quality with much more convenience and versatility,” Freilich says.

The team will further refine their design, and hopes that their high-resolution, easily-deployable, and more efficient alternative may be adapted by both scientists to monitor the ocean’s small-scale responses to climate change, as well as fisheries that want to keep track of a certain region’s biological productivity.

Ever tried to hold your breath for hours, up to 4km underwater to deploy, characterise or manipulate cabling or underwater infrastructure? It’s not something humans can do.

Remote sensing data can be useful in agriculture for increasing productivity while protecting the environment and biodiversity.