The Spacebit Engineering Challenge enables engineers around the world to contribute to the development of “Asagumo 2.0”, a four-legged walking rover that is set to fly to the Moon with the NASA Commercial Lunar Payload Services (CLPS) program in 2021 and 2022.

Spacebit is a UK-based space startup developing space robotic technology and space data analytics tools for space exploration that includes advanced micro robotics and Artificial Intelligence (AI). Their approach to engineering is to deliver competitive cost solutions for the exploration of celestial bodies.

Spacebit's goal is to create new opportunities for industry, academia, and government, advancing the future development of a new infrastructure and commercial resource exploration ‘offworld’ -  beginning with the Moon.

The company's micro-rover technologies and rover deployment systems are designed to carry scientific payloads in support of the Artemis Program space exploration and research goals. Spacebit is the only commercial company to secure two consecutive NASA Commercial Lunar Payload Services (CLPS) delivery missions to the Moon in 2021. Spacebit is one of the first commercial lunar companies that plans to fly on every NASA CLPS delivery on the market.

Future versions of the rover would be sent to explore tubular cave structures – subsurface tunnels, believed to have been formed by ancient basaltic lava flows – to see if they are viable locations in which to build future lunar habitats for human presence on the moon.

Contribute and get your name on the Moon

Over the next several weeks Spacebit will invite the Wevolver community in an open format, for inputs and ideas on various engineering challenges as they develop new rover designs and technologies for space-based applications, beginning with the Moon. The technical feedback will be used to help improve and iterate Spacebit’s technology.

The engineering inputs will be assessed and the most valuable contributors will be rewarded by having their name engraved on the Asagumo rover before it launches on its maiden journey to the Moon. Additionally, the winning engineer will be invited to the control room in the UK or US; or, participate in Spacebit’s remote Robotic Operations & Control Center (ROCC). 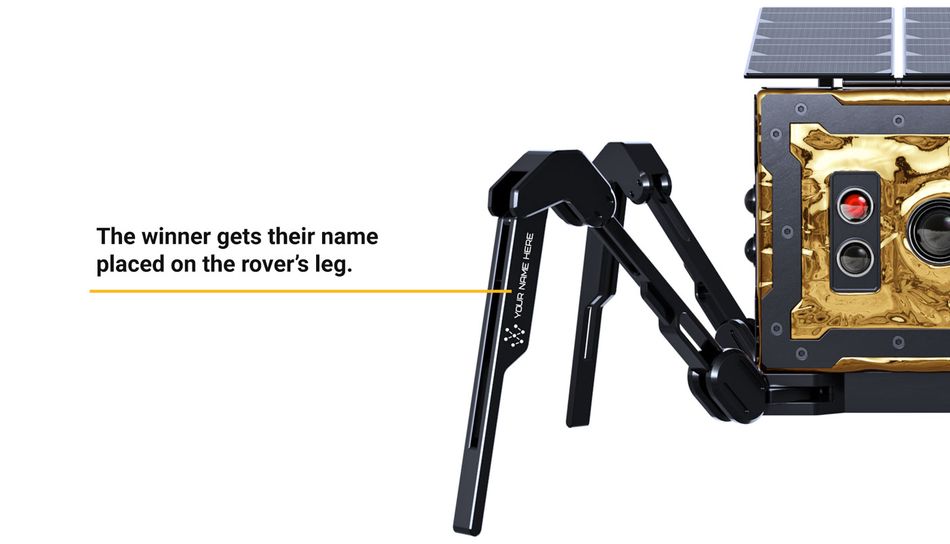 The winner of the challenge will have their name engraved on the rover and be invited to the launch control room. Image credit: Spacebit/Wevolver.

Asagumo is a semi-autonomous micro rover built on a single-unit CubeSat frame, usually used for micro  satellites. The  rover weighs just 1.3 kilograms, is solar-powered and instead of wheels or tracks, is equipped with four spider-like legs. Mission 1 is a tech demo mission where Asagumo is equipped with sensors and camera technology; the rover will attempt to walk for ≤10 meters on the lunar surface, sending data back to Earth. The goal is to eventually explore the moon’s subsurface through the labyrinth of lunar lava tubes and caves. Because of its four legs rather than wheels or tracks, the rover has an advantageous design to explore parts of the Moon other rovers  cannot reach.

Joining the discussion is simple. On Wevolver's social media channels, we will share regular updates regarding the progress of the project. Spacebit will ask for feedback on engineering challenges they have on which you can comment and engage with. To make sure you stay in the loop, follow their company profile on Wevolver.

We're excited to see your feedback, and look forward to seeing the first Wevolver community member inscribed on the Moon!

Spacebit is a UK-based space startup developing space robotic technology and space data analytics tools for space exploration that includes advanced micro robotics and Artificial Intelligence (AI). Our approach to engineering is to deliver competitive cost solutions for the exploration of celestial ...

The Massachusetts Institute of Technology (MIT) is a privately endowed university in Cambridge Massachusetts, and has developed a new powerful, robust, inexpensive 9 kg (20 pounds) quadruped robot called the Mini Cheetah.