The History Of UVGI

The Light That Fights To Keep Us Safe

Utilizing UV-C light to kill germs has made the headlines over the past year, specifically how it is being used to help destroy pathogens like COVID-19. UV-C light is contributing to a safer environment in a big way. Robots and other UV-C equipped devices can be found sanitizing New York City’s trains and buses, Fenway Park, as well as Long Term Care facilities. UV technology has been around for a very long time though. The best way to understand how far UltraViolet Germicidal Irradiation (UVGI) has come is to look back at the beginning.

It might surprise you that the first paper published about UV light and its relationship to microbial organisms was published in the 1870s. In fact, the 1903 Nobel Prize in medicine was awarded for the use of UV light to fight diseases like lupus.

The theory all started with sunlight. Arthur Downes and Thomas P. Blunt published “On the Influence of Light Upon Protoplasms” in 1877. They discovered that sunlight was harmful to the growth of bacteria. It was already known that, unlike plants, bacteria didn’t need sunlight to grow. This was the first time it was recorded that sunlight was in opposition to bacteria growth.

Niels Finsen was the first to begin using artificial UV sources. Finsen created an electric carbon arc light, which he named after himself, that operated in the blue “Chemical” light spectrum. He would put several of these devices together to treat lupus vulgaris, a tuberculosis of the skin. This type of treatment became known as Photobiomodulation, now known simply as Light Therapy, and won Finsen the 1903 Nobel Prize in Medicine.

In the 1930s Harvard School of Public Health instructor William F. Wells had the idea of aerosolized infectious droplets in the air that spread disease and theorized that UV light would be able to kill them UV ventilation systems were installed on the upper walls of a few schools near Philadelphia for Wells to study. He recorded that rooms without the UV devices had a 53.6% measles infection rate, compared to rooms with the UV devices that had a 13.3% infection rate. Wells and his students continued these experiments and learned to optimize these devices so they worked on more diseases like Tuberculosis. 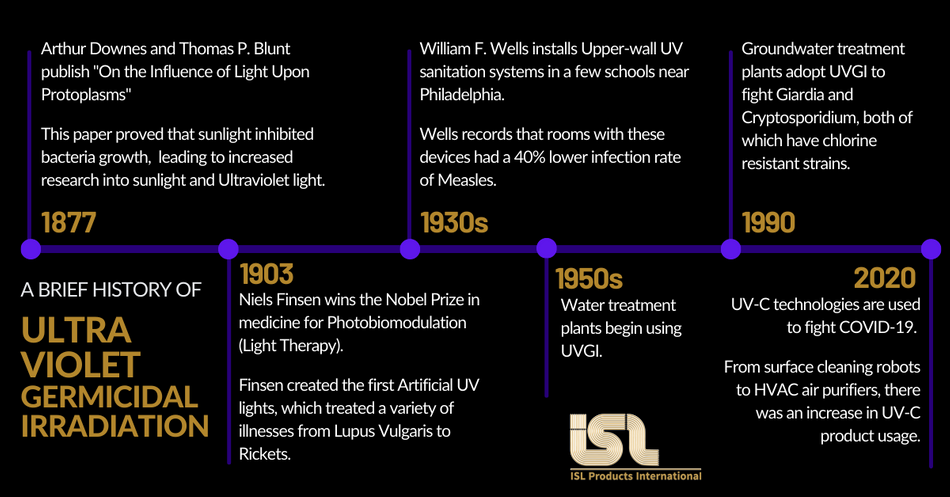 While UV water sanitization began in the 1950s, it gained major traction in the late 1990s. UV light is particularly good at killing Giardia and Cryptosporidium, both of which have strains that are immune to chlorine. While UV water filtration is more common in Europe, it’s becoming increasingly popular in North America in smaller groundwater plants. UV light is not only popular for it’s pathogen fighting characteristics, it’s also a cheaper alternative to chlorine based treatment options. As older chlorine systems are phased out, new UV-C systems are taking their place.

UVGI gets re-examined every time there is a new global health threat, and COVID-19 is no exception. The only difference this time is that there is 100 years of medical and scientific knowledge to lean on.

Some of this technology is familiar, like UV-C wall mount air disinfectors similar to what William F. Wells put in those Pennsylvania school houses 90 years ago. Others are more modern, like the autonomous UV-C sanitation robots being rolled out at most major sporting arenas. Some of these devices are not seen at all, like the devices being added to commercial and residential HVAC systems to clean the circulating air.

Most of these systems are using mercury amalgam bulbs with quartz housings, very similar to Finsen’s lamp from over a century ago. But technology has made major improvements since then in terms of power delivery. UV-C specific ballasts allow bulbs to last longer and perform at peak efficiency. Ballasts tailored to each bulb and use case have allowed UV-C sanitation to perform leaps-and-bounds better than it did in Finsen’s time.

ISL Products has been designing and manufacturing ballasts to help the growing UV-C market for over a decade. Read this design note on the basics of UV-C ballasts for a better understanding of what's literally driving the UV industry.

While UV-C light has had quite a year in the headlines, it has been working tirelessly to make the world a little safer for over a century. It has fought COVID-19, SARS, Giardia, Cryptosporidium, Measles, and Tuberculosis. Through tireless work by scientists and engineers the technology has improved to fight each of these diseases, and will continue to improve in preparation of the next big virus.

The power behind UV-C lamps that keep homes safe from airborne pathogens.

With some foresight, most CAD design layout packages can accommodate castellated edge designs.